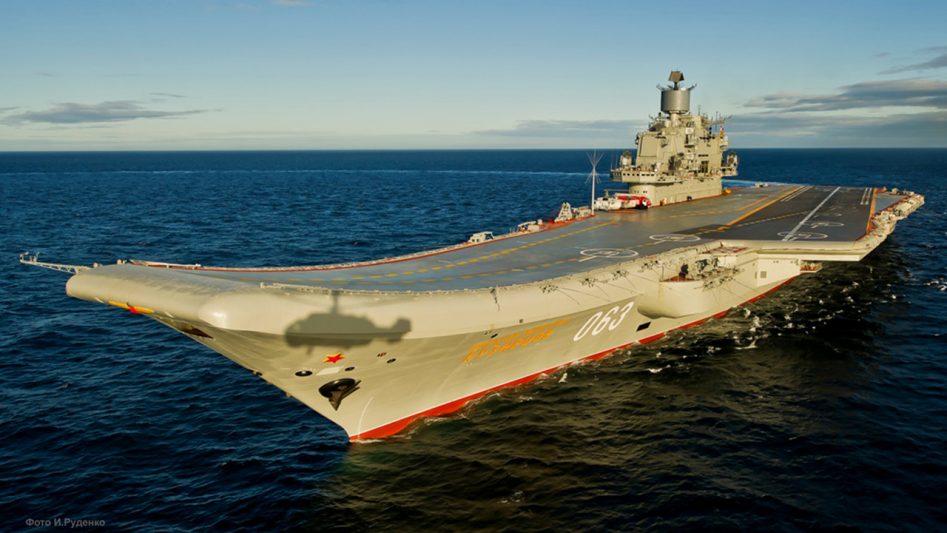 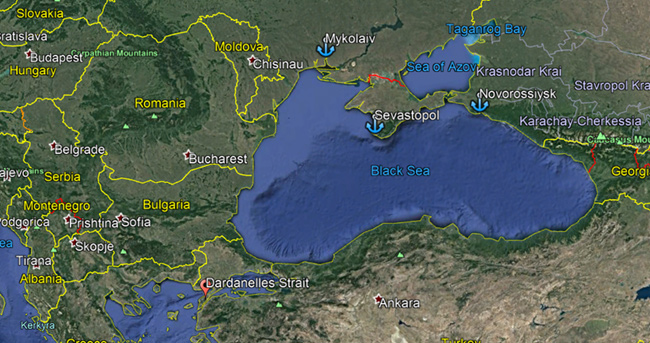 Dardanelles straights and the Russian Naval bases in the Black Sea

Despite exploring the concept of aircraft carriers and closely scrutinising the captured ‘Graf Zeppelin’ Germany carrier, military doctrine past the Iron Curtain never shared the same fascination with the large and iconic carrier battlegroups as the West. Whilst the United States had established itself as the leading power of carrier aviation before the Second World War had even ended, it would not be until the 1960s that the USSR would float something capable of being termed an ‘aircraft carrier’. Interestingly, the USSR and Russia have never termed these vessels as aircraft carriers, as a way to work around the 1936 Montreux Convention, which set out rules for vessels transiting the Dardanelles into the Black Sea. This treaty has a great impact on Russia’s Black Sea Fleet, giving full control of the straits to Turkey and banning the transit of aircraft carriers weighing more than 15,000 tons through the area. Because of this, Russia has always termed its carriers as ‘aircraft cruisers’ justifying this by saying that the vessels fit this description appropriately due to the weapons they carry.

As the Second World War was coming to an end, Admiral Kuznetsov, then Minister for the Navy, conceptualized a fleet of carriers for the Soviet Navy. Over the following months, the size of this hypothetical fleet steadily declined until the Navy was told it would have to make do with just two light carriers. Stalin was not keen on the concept of carriers as he believed Soviet battles would be fought near their own shores and did not see the need for such large symbols of power projection. This and the economic struggles facing a post-war Soviet Union meant the Navy would not even see its two light carriers. As the years progressed, missile technology improved and with it the Soviet questioning of the rationale behind aircraft carriers. ‘Why invest in such large capital ships, when a small submarine or missile boat can sink them?’ they questioned. This view has still persisted to this day and supporters of it can point to American exercises like ‘Millenium Challenge 2002’ with some credibility.

Leonid Brezhnev was the first Soviet President to explore implementing aircraft carriers into the Soviet Navy. The first class of ‘Helicopter Carrier’; the Moskva, was launched in 1967, with the second and final ship in the class, Leningrad, launched in 1969. These vessels were both launched in Mykolaiv, Ukraine, meaning they would need to be able to exit the Black Sea and hence the interest in the Montreux Convention.

These ships were clearly an early foray into carrier-based aviation, they did not carry a fixed-wing element, with their air wing being composed of entirely helicopters. The design was discontinued after just two vessels, mainly owing to poor seaworthiness that restricted their role to (ASW) Anti-Submarine Warfare in the Mediterranean. The Moskva class was effective in this role though, serving through to the 1990s as the flagship of ASW surface groups. 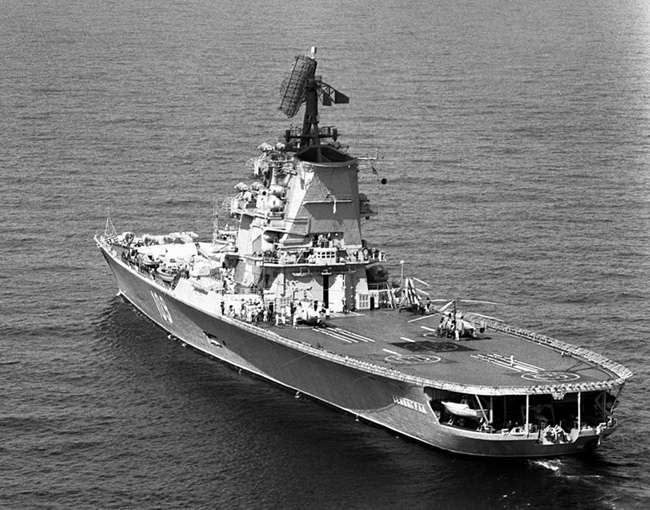 The ASW role had given naval aviation a new lease of life in Russia. The need to hunt NATO submarines and their nuclear arsenals was a pressing demand on the navy and the aircraft carrier’s air wing offered the capability to both hunt enemy submarines and protect the fleet.

The Soviets stepped up their ambitions for the next aircraft carrier project. Project ‘Orel’ was to be a nuclear-powered super carrier with an airwing of 70 fixed wing Aircraft, rivaling the American beasts roaming the World’s oceans. With changing Soviet presidents, the military doctrine would too change. The ‘Orel’ project was shut down in favour of a smaller, more cost-effective option. The compromise found a halfway point between the Moskva and the proposed ‘Orel’ and the first ‘Kiev’ class would be laid down in 1970. The Kiev class was unlike any other aircraft carrier in service around the world. It combined aspects of both a missile cruiser and an aircraft carrier with a large flight deck, but the bow of the ship being taken up by massive armaments. With 4 ships of the class constructed, the armament could greatly vary but generally two guns of either 76 or 100mm calibre, launch cells for AA (Anti-Aircraft) engagement and also mammoth Soviet anti-ship missiles like the Bazalt being carried. The carriers weighed over 40,000 tons necessitating the circumventing of the Montreux Convention.

These carriers were fitted with neither catapults nor a ski-ramp, meaning aircraft would have to be in the VTOL (Vertical Takeoff and Landing) configuration. For this requirement, Yakovlev produced what would be the only operational VTOL aircraft of Soviet Navy Aviation, the Yak 38. The Yak-38 was built specifically for operation from the Kiev class carriers and appears to closely resemble the British Hawker Siddeley Harrier, this appearance is very superficial however as the VTOL configurations between the two aircraft differ greatly. The initial requirement for the aircraft had specified supersonic performance, though this added great difficulty to development of airframe, as a result of this the requirement was lowered to a speed of mach 0.95.

The Soviets did not completely give up on the desire for a supersonic aircraft to operate from the Kiev class carriers. As Yak-38 development continued, Yakovlev were tasked with producing a supersonic fighter for fleet defense, with capabilities matching those of the current front line fighters. This aircraft was an immense challenge to develop. Difficulties arose surrounding how both afterburner and thrust vectoring capabilities could both be incorporated. Not only this but the issue of how to protect the aircraft from the immense heat of vertical landing took a great amount of time to solve, ultimately requiring costly materials to form a quarter of the aircraft’s construction. The Yak-141 would not enter service with the Soviet Navy. Technical issues had proven costly to overcome and Naval doctrine was changing as financial difficulty suffocated the Soviet Union. After one prototype was involved in a near-fatal crash landing aboard the Kiev class carrier ‘Admiral Gorshkov’, funding was discontinued. 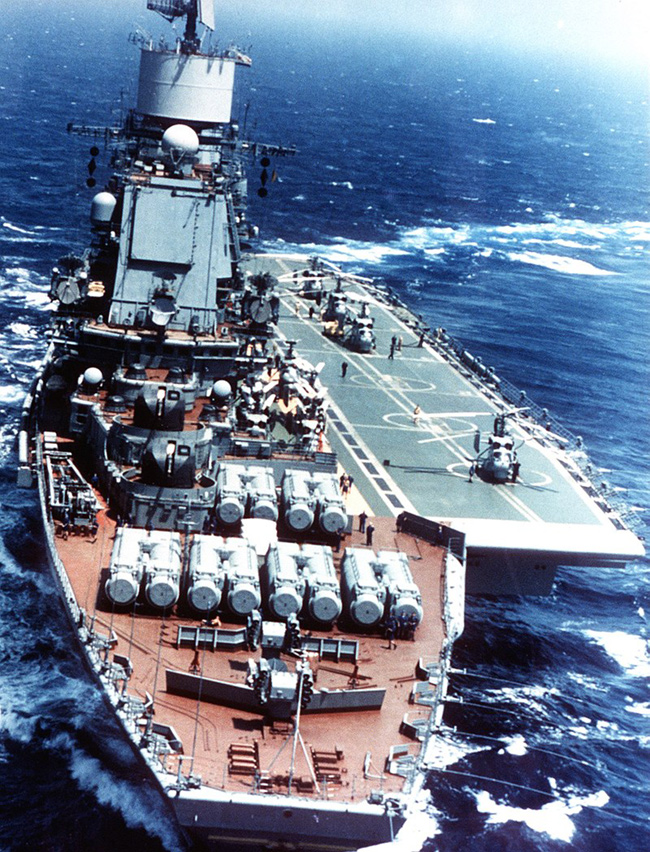 The Kiev Class carriers and their air wing of Yak-38s and Kamov helicopters were a major success in the eyes of the Soviet Union. The vast arsenal of weapons and capabilities allowed them to take on a diverse range of roles. The class served until the late 1990s, with the first 3 ships having been variously decommissioned and disposed of. The fourth, ‘Admiral Gorshkov’ was sold to India becoming ‘INS Vikramaditya’ and is their only aircraft carrier. Following the sale, she spent around a decade, stripping away the bow weapons to increase the size of the flight deck. A ski-ramp was added in place of the weapons and arrested recovery cables installed, in order to operate Navy MiG-29K aircraft, included in the originally $2.4 billion sale, from the carrier. Operating conventional aircraft from a ski-jump has many disadvantages, mainly limiting the fuel and weapons load an aircraft can carry.  Following numerous delays and political squabbling,’INS Vikramaditya’ was finally commissioned into the Indian Navy in 2013, and remains operational.

In 1981, the then Russian Minister of defense Dimitriy Ustinov was disappointed that the Kiev class could not match up to those of the United States. Because of this, he begun the Kuznetsov project to built a class of carrier matching that of the West, though conventionally powered, unlike American carriers. The Americans took an interest in this program, correctly speculating that the new fleet of Soviet carriers would be capable of operating advanced Sukhoi and MiG fighters, though their prediction of a fleet of CVs by the “by the end of the next decade” proved quite awry. Two ships of the Kuznetsov class were laid down in 1985,at Mykolaiv, Ukraine, like all carriers built in the Soviet Union before them. ‘Admiral Kuznetsov’, the first in the class, became operational in 1995 and, thanks to her designation as ‘heavy aircraft carrying cruiser’ was able to transit from the Black Sea to the Northern port of Severomorsk to become flagship of the Northern Fleet. The Admiral Kuznetsov class was the first Soviet carrier to feature a full flight deck and shares the same STOBAR (Short Takeoff But Arrested Recovery) configuration as thew modified Kiev class ‘INS Vikramaditya’, embarking previously conventional aircraft like the MiG-29 and Su-27. The carrier’s primary aircraft is the SU-33, a modified version of the Su-27 for carrier operations with features such as canards for improved low-speed performance and a tail hook for arrested landing. Like all carriers before, Kamov helicopters are also key to the air wing and ASW capabilities.

Despite having a full flight deck, the Kuznetsov class still boats and impress armament, with 12 huge Granit anti-ship missiles stored below deck as well as vertical launching systems for surface to air missile systems like the Sa-9 Tor.

‘Admiral Kuznetsov’ has seen service as recently as 2017, deployed to the Mediterranean to support operations against IS and the FSA in Syria, though these deployments are largely token, as Russia’s base at Latakia can operate a more diverse range of aircraft from a full runway, increasing payloads and reducing risks from takeoffs and landings. These deployments have begun to show the age of the carrier, reliability problems, particular engine related have plagued the ship for a number of years. Despite this, Russia intends for her to serve as their sole carrier until at least 2025. 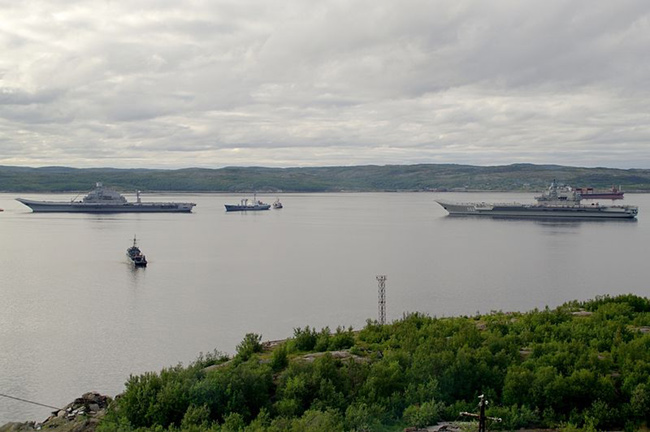 Vikramaditya-on the left, Kuznetsov on the right

The second ship of the class ‘Varyag’, also laid down in 1985 took a very different direction to ‘Kuznetsov’ (quite literally). Cancelled in 1988 when two-thirds completed she was left at Mykolaiv in her unfinished condition for 10 years before being sold to China, original plans were bizarre, with intentions for her to become a floating casino in Macau. Eventually though, ‘Varyag’ was overhauled at Dalian shipyard and became China’s first aircraft carrier ‘Liaoning’. China has since constructed a second carrier, closely based off the Kuznetsov hull, though reflecting 30 years of technological advancement since the original design. The ‘Type 001A’ has begun sea trials recently, in May 2018. Interestingly, China is comfortable designating these ships as ‘aircraft carriers’ as they don’t need to circumvent the Montreux Convention.

The Soviet Union had hoped to go even further than the Kuznetsov class, with a genuine ‘supercarrier’ truly matching the Americans, total tonnage would have been around 85,000 tonnes, close to that of the Nimitz class.

‘Ulyanovsk’ was designed from the 1975 ‘Project Orel’ that was ultimately scaled back to become the Kiev class. ‘Ulyanovsk’ would of course still feature the immense anti-ship and anti-aircraft armaments of it’s forefathers, most likely advanced systems like ‘Oniks’, ‘Kalibr’ and ‘kinzhal’. The Air Wing was planned to include 68 aircraft, 44 fighters, 6 Yak-44 Airborne Early Warning Aircraft (comparable to the American E2 Hawkeye) and the remaining aircraft to be helicopters. Blueprints proposed two steam catapults as well as a ski-ramp, enabling the use of the Yak aircraft and greatly improving the range and payload of the Sukhois and MiGs.

The design ultimately did make it beyond paper, with the hull being laid down in 1988. The project was always going to be ambitious and construction ceased 3 years later with the ship nearly a quarter complete. By the end of 1992 ‘Ulyanovsk’ had been scrapped, leaving ‘Admiral Kuznetsov’ to roam the seas as Russia’s sole source of carrier-based aviation.

Jordan is a Criminology and Psychology student in Southampton, England. Particularly interested in modern day military build ups and geopolitics. Whilst his strongest area is in exploring the dynamic military and political situations across the Middle East, he loves studying a broad range of military and political subjects over the past 100 years.