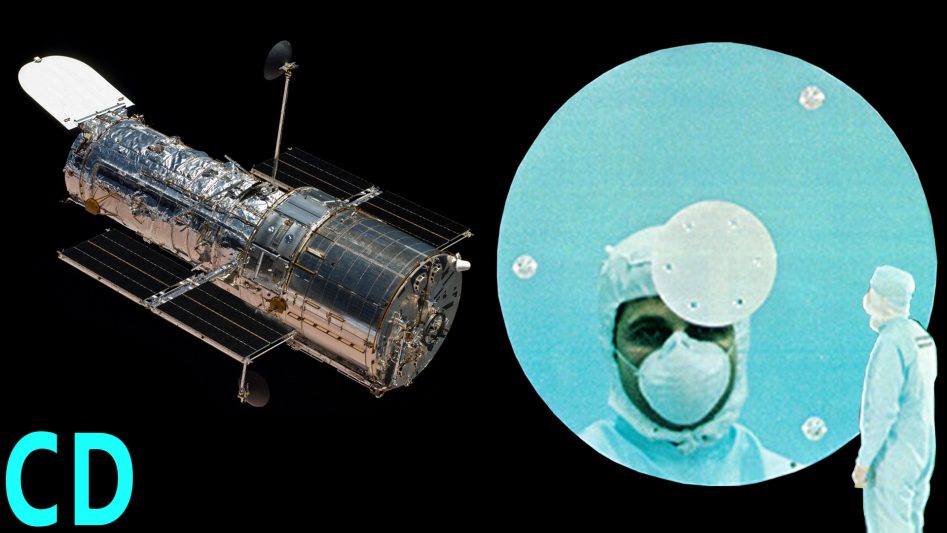 In April of 1990 the American Shuttle Discovery launched up from the Earth, into a higher orbit than ever before, to deploy a special payload: the Hubble Space Telescope. Above even the thinnest part of the atmosphere, Hubble would be able to see far-off stars and galaxies without distortion and expand our understanding of the distant past. Or at least, that was the plan.

But by June it was clear that there was something very wrong: the telescope with one of the most perfectly ground mirrors couldn’t focus properly. Apparently, the first great Space Observatory was ‘short-sighted’.

Hubble’s 2.5-metre (8.2 foot) mirror was rendered incapable by an error in its shape less than one-fiftieth of the width of a human hair. The primary mirror suffered from what is known as ‘spherical aberration’: more often found in sloppily-made amateur telescope projects.

However, this was a problem almost a decade in the making. NASA contracted the private firm Perkin-Elmer to make Hubble’s Optical Assembly and ‘Fine Guidance System’. Construction of the primary mirror began in 1979 and was completed in 1981. But during these years the whole project was under threat: costs were rising and the schedule to deliver on time was slipping. NASA put the heat on the management of Perkin-Elmer, pushing for them to keep up with the schedule or lose the contract.

Behind the scenes, the polishing and testing of the primary mirror was underway. Because Hubble’s mirror was an ‘aspherical’ design, it required a special apparatus to check its quality, known as a ‘null corrector’. Perkin-Elmer even designed their own high-specification Reflective Null Corrector (or ‘RNC’) to test to the exact standard of 1 micro meter or 1/1000th of a millimetre as required for the space telescope.

The ‘RNC’ was a cylinder 76 centimetres (2.5 feet) high, and about half a metre (1 and a half feet) wide. Inside, two mirrors and a lens were arranged to create a wave-front on the Hubble primary mirror below. If the mirror was fabricated perfectly, this wave-front would show no contour lines: hence the ‘null’ in the instrument’s name. The apparatus was approved and set up on a ‘tower’ in a dedicated room, a process that took two weeks.

The position of the RNC’s lens was measured using an Invar rod: a precision made and measured rod of nickel-iron alloy named for its ‘invariability’: specifically, low expansion under different temperatures. If the length of this rod varied by even a fraction of a millimetre the test measurements would be wrong and the mirror would be ground to the wrong shape.

As the technicians lowered the lens of the RNC into position, they noticed that they couldn’t fit it all together – the Invar rod stuck out by just over a millimetre.

The ends of Invar Rods were rounded and polished because the positioning system used a light interferometer rather than mechanical measurement. As part of this process, a focused beam of light was reflected off the end of the Invar rod. To make sure it was focused exactly on the centre of the rod end, field caps were fitted to hold the rods in position laterally. These caps had a hole in the centre to allow the focused beam to hit the rod end and a non-reflective surface coating around it. At some point, a small section of this non-reflective coating on one of the field caps was chipped off around the centre hole. When the technician was setting up the focused beam he got a reflection from the chipped area on the end cap instead of the rod end which caused a 1.3mm misplacing of the Invar rod.

Rather than wasting time investigating why the assembly didn’t match the Invar rod, the crew found three metal spacers and squeezed them into the bracket holding the lens, so it now agreed with the measuring rod. Then the RNC was left in place so as to not disturb its supposedly fine calibration.

The result of this oversight in the assembly of the RNC would lead to the mirror being precisely polished but with an error ten times greater than the specified tolerance.
Every day for nine months the crew polished the primary mirror, periodically moving it on tracks to the null corrector to see how much closer they were to the final shape. At the end of the long process, the RNC gave a ‘null’ result: at last, the so called perfect mirror was finished.
To verify the mirror’s shape, a further test was carried out using a cruder ‘Refractive Null Corrector’. But this test gave a different result – this time, it appeared that the Hubble mirror had a flaw. But as the Refractive Null Corrector had not been ‘certified’ for testing against spherical aberration, this result was discounted.
The fault had been found but it was ignored and more over the discrepancy between the two tests was not investigated further and the written documentation of the “fix” with the spacers was also misplaced.
Over the four years that the mirror was stored due to delays because of the Challenger shuttle disaster, several universities requested permission to test the mirror but were all turned down because the manufacturers were confident about their own testing procedures. A decade later, the $1.5 billion space telescope was high above the Earth with a flawed mirror.

There was a perfect backup mirror that had been made by Kodak but it would have been impossible to replace the mirror once in orbit and too time-consuming and expensive to bring Hubble back to earth for refitting.

In 1993 an ambitious and expensive Shuttle mission – with five space walks – managed to install corrective optics on the secondary mirror to fix the problem.

When the cause of Hubble’s trouble was eventually found, Perkin-Elmer agreed to pay a fine of $15 million, thereby avoiding a lawsuit by the Government.

Both Perkin-Elmer and NASA were heavily criticised for not picking up on the quality control issues and relying on a single test instrument.

Hubble is still operational today and has been updated over the years and is expected to be in operation until between 2028 and 2040 when the natural decay in its orbit will bring it back to earth if it is not re-boosted to a higher orbit.

Until then it will continue to provide mankind with some of the most scientifically useful and inspirational views of our Universe to date.

So thanks for watching, I just like to say this episodes shirt was the Penny Dot Lane Retro Mod Polka Dot by Madcap England and is available at AtomRetro.com with worldwide shipping from the UK.

Offical NASA Report into the failure of the Hubble mirror:  https://www.ssl.berkeley.edu/~mlampton/AllenReportHST.pdf

Could We Launch Spacecraft with a Giant Space Gun?