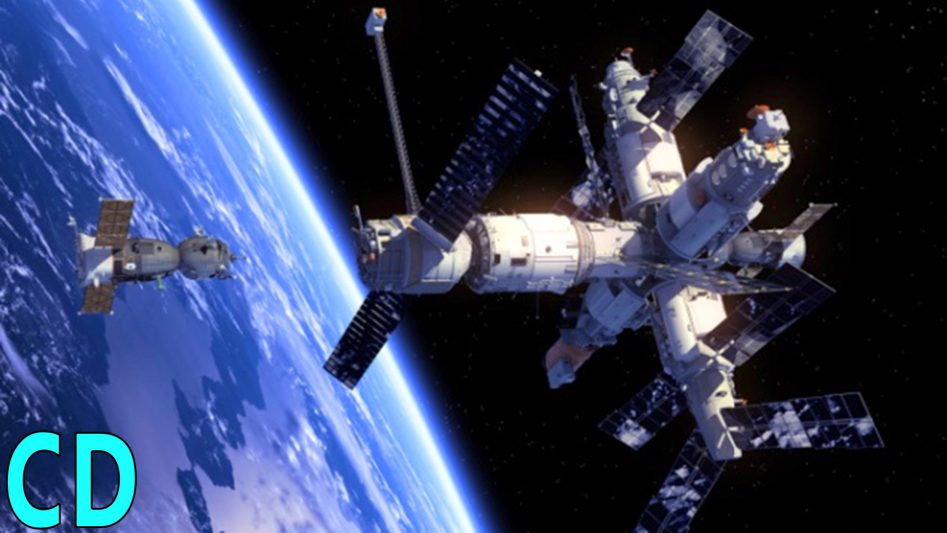 Of all the 100’s of thousands of pieces of space junk and nearly 1500 satellites in orbit around the earth, it may come as a surprise that so far there has been only one major collision involving a manned craft and it affected both Russians and Americans.

After the Apollo Moon landings, the US switched it long-term goal to the Space Shuttle system and the Soviet Union shifted its focus to a permanent working presence in space.

As the Salyuts came to the end of their working life a new permanent space station was created and that would become known as Mir.

To the men and women on board, Mir was in many ways a world away from Earth, over which they passed more than 15 times a day, at an altitude of 230 miles (360 kilometres). The 130-ton habitation was able to support human life with resupply just three times a year, via the automated ‘Progress’ cargo vessel.

But when the USSR dissolved in 1991, the crew of Mir found themselves operating a space station with an uncertain future.

MIR went from a Soviet space station to a Russian Space station and just as the Soviet empire fell away leaving just Russia, so did the budget for space programs like MIR and the newly formed Russian Space Agency was hamstrung was by lack of funds and infighting between the powerful design bureaus.

This scared the Americans if the Russian Space Agency failed there would be a lot of unemployed highly qualified rocket engineers looking for work and countries like Iran and North Korea would be more than willing to give them new jobs.

In June 1992, the new Russian President Boris Yeltsin and US President George H. W. Bush announced a program of co-operation between the two nations. Basically, the US would supply funds to keep Russian Space Agency afloat and the Russians would share their expertise in long-term manned space operations. They would also allow regular Space Shuttle missions to visit and service Mir and in addition, NASA offered to fund additional station modules, which otherwise would have been scrapped. One of the these named ‘Spektr’ and was docked with MIR in 1995. Originally a US military project to test the anti-missile defence. Spektr was reconfigured, adding 700kg of American equipment and instruments and would also become the living quarters for visiting American astronauts arriving on the Shuttle.

By February 1997 Mir had already exceeded its expected operational life of 5 years, twice over: but the Russian space station apparently still had a future. However, astronauts arriving with Expedition 23 were immediately met with a reminder of Mir’s ageing systems. As their Soyuz spacecraft approached the station, the automatic docking system was misaligned: with seconds to go, the module commander had to override the automatic controls, and dock Soyuz manually.

Mir’s automated docking system (known as ‘Kurs’) had become a concern: it was manufactured by a Ukrainian company which was charging around $2 million for each flight. The Russian space agency, looking to save money was considering doing away with ‘Kurs’ altogether, if possible. Expedition 23 was scheduled to carry out tests on the backup docking system, known as Teleoperated Rendezvous Control System, or ‘TORU’. This system gave the commander a view from the arriving craft through a remote camera and the ability to control the remote spacecraft with two joysticks.

In March, Commander Vasili Tsibliyev performed the first test, undocking Progress from Mir, moving to a parking orbit, then making an approach to re-dock. However, the TORU screen showed static, and the crew could only gaze through the windows as the dark shape of Progress sailed past at 200 metres (600 feet): a near miss.

Afterwards, Moscow ground control identified the source of the interference as the antenna for the ‘Kurs’ automated docking system, which provided TORU with range telemetry. They decided that on the next test, they would switch off the antenna, and crew would instead track the cargo vessel through the station’s windows, using a handheld laser rangefinder and a stopwatch to find its speed and distance.

Part of the crew on the day of the test was British born American NASA astronaut Michael Foale. On June 25th 1997 Tsibliev was ordered to carry out the test: this time, the remote camera feed was working. The cargo vessel was in a parking position about 5km away. The first problem the crew had was just locating the vessel, then after initiating the vessels approach they had no measurements of how far away or how fast it was travelling. Commander Tsibliev struggled to make out the shape of the space station on his screen against the white clouds of the earth below and using the TV camera alone he found it very difficult to determine how fast the cargo vessel was travelling or its distance.

To try and work out the speed and distance, Michael Foales was given a laser range finder as told to look out for the supply ship. But his line of sight to the vessel from Mir was obscured by solar panels.

By the time they had located the cargo vessel it was about 150 metres away and travelling fast. Tsibliev applied the braking thrusters but the craft was travelling too fast to stop in time.

As can be seen in this footage of the remote camera view, Tsibliyev is heard telling Michael to get out and go to the Soyuz return craft as the cargo vessel approaches.

As the cargo vessel sailed past the docking port it hit a solar array and then the Spektr module, breaching the hull. Inside  MIR decompression alarms sounded, and the whole station rocked, and entered a slow spin. If the crew could not contain the breach, they had less than 30 mins of air left and would have to abandon the station. They scrambled to cut the cables through the hatch to Spektr and eventually sealed off the module.

But that’s wasn’t the only problem, MIR was now spinning because of the collision and the solar panels were moving away from the sun and soon the power would fail. The main computer powered down, and the usually-noisy station went silent. For the next day, the crew worked in darkness, mopping up condensation from the station walls, and diagnosing the damage from the collision.

Slowly tumbling, Mir only had power to communicate with ground control when the solar panels caught the Sun. Peering out through the window of the airlock, Michael Foale used a sailor’s technique with a scientist’s knowledge of physics to estimate the station’s rotation against the stars. Using this data, Russian ground control fired Mir’s onboard engines and stabilised the spin enough to regain power once more.

After the collision, the cargo vessel was moved away from MIR and deorbited to burn up on re-entry.

Over the coming weeks, a series of IVA (Intra-Vehicular Activity) operations in the depressurised module allowed the restoration of 70% of Mir’s power. But the breach in Spektr’s hull was never repaired, and the experiments onboard: mostly American, had to be abandoned.

Unsurprisingly, the ‘Kurs’ automated docking system was never phased out, and an advanced version of it is used today to dock the ‘Soyuz’ and ‘Progress’ craft with the International Space Station.

MIR lasted until March 23rd 2001 when the funding for the new International Space Station forced the Russian space agencies hand to abandon the ageing MIR. It was finally de-orbited, burning up over Fiji and the ISS took over as man’s only permanent outpost in space.

So thanks for watching, I just like to say this episodes shirt was the Trip Flames by Madcap England and is available at https://www.atomretro.com/madcap_england with worldwide shipping from the UK.

7 Scariest Animals and Creatures of Your Nigthmares

What happens to old spacecraft?

Buran-Energia : The Soviet Space Shuttle 2.0 on a Moon Rocket

Can We Control the Weather with Technology?