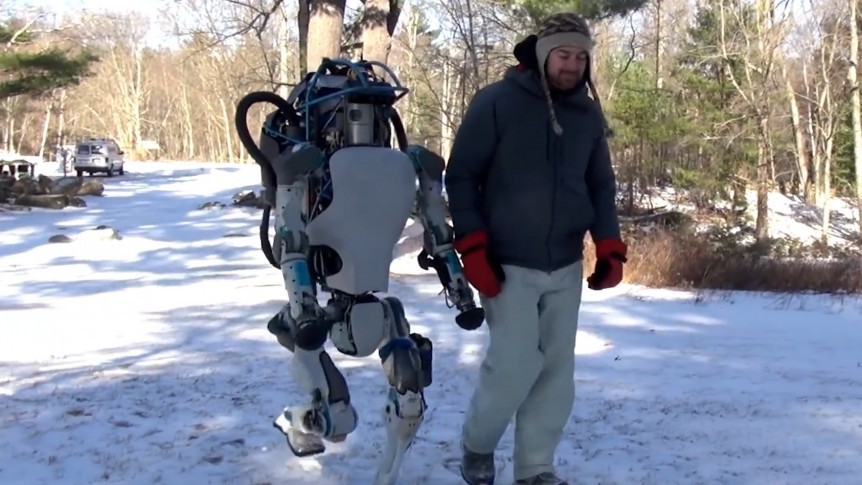 Altas stands 1.8m or 6 foot tall, weighs 150Kg and is designed for a variety of search and rescue tasks.

Atlas is based on Boston Dynamics’ earlier PETMAN humanoid robot.

It has four hydraulically-actuated limbs and is constructed of aluminum and titanium and is illuminated with blue LEDs.

Atlas is equipped with two vision systems, a laser rangefinder and stereo cameras, both controlled by an onboard computer.

It can not only walk across rough terrain, it reacts to slipping and retain it balance much like human can.

It has hands with fine motor skill capabilities and its limbs possess a total of 28 degrees of freedom.

It Can do advanced tasks like finding and picking up objects and if they are dropped it will try again and again until it completes the task.

Atlas can also react to external forces like being pushed or kicked and can get up if it falls over.

It can also do things like finding and opening doors, climbing ladders, clearing debris, locating valves, the sort of tasks human rescue works would need to do.

The Cheetah robot built by the Massachusetts Institute of Technology is the first four legged robot to be able to not only autonomous jump over obstacles in its way but also run at up 28mph which is slightly faster than Usain Bolt.

Using its onboard LIDAR visual system which uses Lasers to map the terrain in front of the robot, it can see where it is going and obstacles in its way.

The team at MIT developed a three-part algorithm to plan out the robot’s path, based on LIDAR data.

Both the vision and path-planning system are onboard the robot, giving it complete autonomous control.

This works out the height of the objects and the distance from itself and the speed the robot is traveling at, then it works out the best place to jump and clear the object.

In experiments on a treadmill and an indoor track, the cheetah robot successfully cleared obstacles up to 18 inches tall — more than half of the robot’s own height — while maintaining an average running speed of 5 miles per hour.

Testing the robot in an open area actually worked better that on the treadmill because it has more time to react with it clearing 90% of the obstacles compared to 70% on the more limited area of the treadmill.

Spot is the latest electrically-powered, hydraulically-actuated, four-legged robot to come from Boston Dynamics

Designed for indoor and out door  operation it can a good kicking from it’s makers, though really that just a good test to show its stability and ability to react to external forces.

At 1 meter tall and weighing 72kg, Spot is smaller than it previous versions like Bigdog and is all electric and much quieter without the petrol engine that the bigger robots like the LS3 have.

It uses a form or scanning LIDAR for it navigation and it’s backwards facing legs like that of a goat give to great agility.

It can negotiate rough ground, climb hills and stairs and can hop about like a real animal but it still remotely controlled at the moment

As for what purpose it would have is unclear but it could be a robot scout in military situation or autonomous guard dog but equally could be a mechanical pet. We’ll have to wait until Boston Dynamics releases more information.

Probably the most well know Robot is the Japanese Honda ASIMO and while it may now act very realistically its being a long time in the making.

In 1986 Honda undertook a challenge  that seemed straight out of science fiction, to build a humanoid robot that might one day help people, move with them and improve their lives.

Making this dream a reality took decades and tested the skill of the world’s most capable engineers.

Their first hurdle was to build a machine that could walk on two legs, a process that we humans take for granted and Honda thoroughly researched.

The initial prototype had deliberate, flat-footed steps, each taking fifteen seconds to complete.

Later prototypes had a more natural gate, they walked dynamically, falling forward between steps as humans do.

Then in 1992, Honda achieved a milestone, prototype E6 not only walked in a straight line without support but was able to climb stairs.

So Hondas engineers advanced to the next level of development adding a torso, head, arms and hands.

The first humanoid robot Honda showed to the public was self-contained and walked under remote control.

It stood nearly six feet tall and weighed over 200kg.

The next version in 1997 was lighter and more compact to better interact with people on a more human scale.

As the new millennium approached, rapid advances in computers, hydraulics and micro circuitry brought science-fiction another step closer to science-fact.

And Honda greeted the world with a more approachable, friendlier robot, it called  advanced step in innovative mobility. The first AISMO.

In the next seven years ASIMO’s movement were refined to handle complexion environments and perform new tasks.

its size was reduced further to accommodate human living spaces and today, three decades since Honda engineers first accepted the challenge, ASIMO has a host of advanced physical and intelligence capabilities.

ASIMO is now an autonomous robot that not only runs, jumps, spins around and anticipates people’s movements but can manipulate objects and distinguish people by their voice and their face.

As development continues ASIMO is fountain of innovative mobility ideas they go far beyond its original design and much closer to practical reality.

ASIMO a dream Honda realized one step after another that someday soon robots will coexist with people, move for those who can’t, work in difficult situations and be the eyes and ears, hands and legs of people who need help in their everyday lives.

What Fossils Will We Leave Behind in 65 Million Years?

5 Smallest Things & Man Made Objects in the World