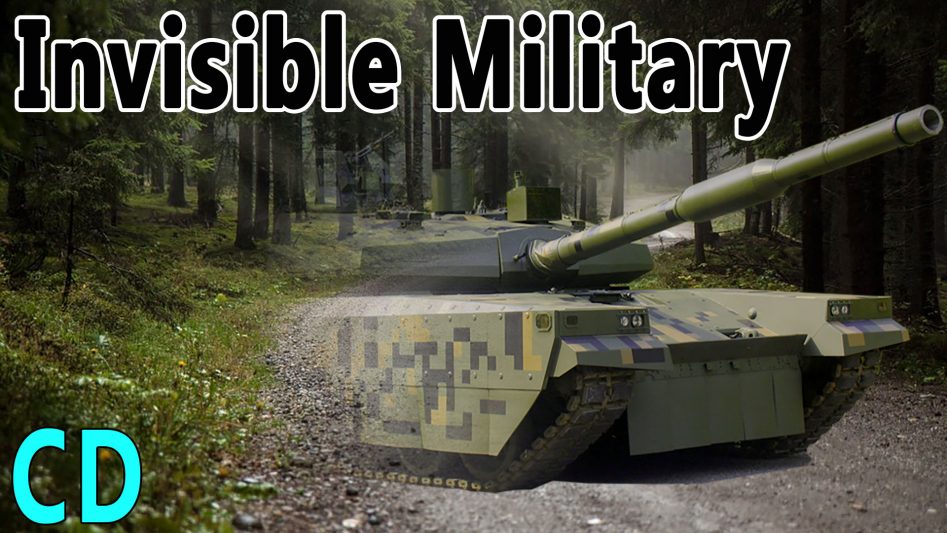 So, it would seem only right that the military has been striving to create its own version of invisibility for as long as we have had camouflage but other than painting your face green and brown and wearing grass on your head what else has been done to make military invisible.

Do you remember the film “The Philadelphia Experiment”, well just in case you haven’t seen its about a world war 2 experiment to make a US Navy destroyer the USS Eldredge invisible, though in the film the field generator they use makes the ship disappear and move through time and space and when it comes back strange things have happened the to the crew.

Well, the basis of the film is true, to make a ship invisible but not so you can’t see it but invisible magnetically so that it wouldn’t trigger magnetic mines. This technique is known as degaussing after the unit of magnetism, the gauss.

During WW2 the Germans used magnetic mines which detected the increase in the earths north  magnetic field when a ship passed over it. This was causing havoc with the British fleet in the North Sea and English channel. In 1939 after recovering a mine accidentally dropped on mudflats at low tide off of the south-east coast of England, the British were able to work out how the mine worked and then develop methods to reduce the magnetic effect the ships had.

To degauss the biggest ships giant coils of wire were fitted around the perimeter of the ships like aircraft carriers and troop carriers and several thousand amps passed through them. These would be powered by the ship generators like a giant electromagnet and this added a slight south magnetic bias which offset the magnetic effect of the ship near the mines.

This had limitations as it could only be used on the biggest ships with the electrical power to run it and also to where in the world it was used because the earth’s magnetic field varies in strength in different locations, it would need to be reversed if it were in the southern hemisphere for example.

Over time, mines also became more sophisticated so today the latest degaussing systems can match the magnetic field of the ship to the background magnetic field anywhere in the world effectively making it magnetically invisible.

Now whilst this helped protect against mines, ships could still be seen by the biggest threat, submarines. During the first world war a technique of painting large abstract lines, shapes and contrasting colours over the ships was developed called Dazzle camouflage and the ships gained the nickname of Dazzle ships or Razzle Dazzle in the US.

Now you be wondering why you would make a grey ship in the grey north Atlantic to stand out with these massive abstract patterns, but these are not to hide the ship. These confusing markings were to make it difficult for submarine commanders to work out the ships type, heading and speed. From the side on they helped disguise the shape by which the ships could be identified and from oblique views you can see it makes it harder work out which end is which and thus it’s heading. This was to try and make them get their torpedo firing positions wrong so they would miss the ships.

In WW1 and WW2 over 6000 allied warships used these dazzle patterns with each pattern being different. The problem was that because everyone was different, they couldn’t tell which patterns worked well and which didn’t and as world war 2 progressed advances using planes and radar made dazzle less relevant.

The main enemy of the convoy ships was the U-boats and in WW2 allied planes were used to find and attack submarines but the u-boat crews could often see the planes approaching by their dark silhouette against the lighter sky and this gave them time dive before planes could engage them.

In 1943 the US Navy tried out a technique which had been developed by Canadian navy called Diffused lighting camouflage. The US Navy created project Yehudi, this used lights similar to car headlights mounted on the front of the plane and along the leading edges of the wings. These were automatically controlled with a photocell so that the brightness of the lights matched that of the sky behind the plane.

This apparently simple idea made the plane blend in the sky by breaking up the dark silhouette. The idea was refined and in 1945, tests with a Grumman avenger showed that it was able to get within 2.7km of the target ship without being detected, where as without the Yehudi lights it was visible 19km away.

Although these worked well by the time of the end of the war radar had made the Yehudi lights pretty much redundant but that didn’t mean that the idea was bad, infact it has been the basis of many ideas to apparently bend light around an object to make it appear invisible.

The most notable of these is adaptive camouflage which has only really been possible recent years with new Electrochromic materials and flexible OLED displays. The principle is similar to the Yehudi lights but instead of a photocell they use a camera on the opposite side of the vehicle which displays its image on the watched side, so you don’t see the vehicle its self and whist close up it wouldn’t fool anyone, from farther away it can hide and blend in to the background.

Now whilst that might work for visible light most weapons used infrared or heat to lock on to a target.

So the latest active camouflage uses thermoelectric panels. The system called adativ by BAE systems has about a 1000 or so of these small hexagonal panels also known as Peltier panels which can be heated or cooled by applying an electric current to them. Infrared cameras pick up the background infrared and the relay this to the Peltier panels to hide the vehicles shape from infrared weapons or enemy spotters by matching the background Infrared levels.

As the sides of the vehicle is now one large infrared display, the shape of another object can be projected on to it like in this example where a tank is made to look like a car, it could even flash text messages which would only be seen in infrared.

Now this isn’t the full invisibility as we have seen in the movies but we are getting closer to approximating it, though you do have to say that with what we know of current technologies bending light around an object is going to take some serious science, which brings on to our sponsor for this video because if you are interested in science, then you should check out brilliant, a problem solving website that teaches you to think like scientist. Instead of passively listening to lectures, you get to master concepts by solving fun and challenging problems and brilliant provides the tools and framework you need to tackle these challenges. Brilliant’s thought-provoking content based around breaking up complexities into bite-sized understandable chunks will lead you from curiosity to mastery. So what are you waiting for? Hop on over to Brilliant.org/curiousdroid and sign up for free, and the first 200 who do so will get 20% off of the annual premium subscription.