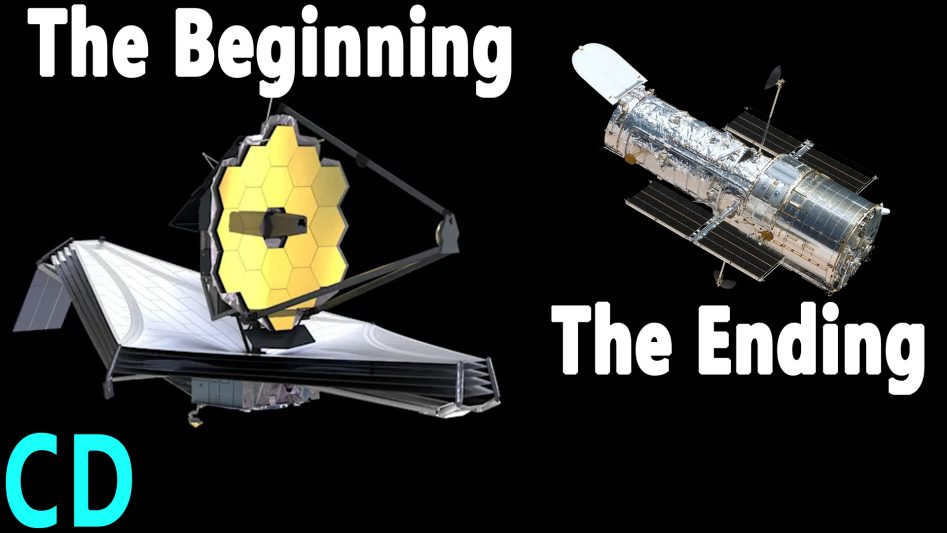 After 40 million man-hours of work, huge cost overruns and delays which have made the length of time from inception to launch longer than the entire moon program including Mercury and Gemini and Apollo, the James Webb space telescope is almost ready to launch.

But even at the last minute, an “incident” during the final preparations for loading it onto the launch vehicle has pushed back the launch date 4 more days to the 22nd Dec 21. Hopefully, if everything goes well and the deployment 1.5 million km from earth is successful, the successor to Hubble and can start discovering things that Hubble couldn’t.

But closer to home Hubble isn’t dead yet and even though it’s been having a few senior moments recently, Hubble has been one of the most productive space programs of all time and could go on for even longer if a way to service it could be found since the demise of the space shuttle.

This is the story so far of Hubble and Webb.

Big projects like the James Webb Space Telescope are often beset with delays and problems. The Hubble its self was no stranger to controversy. Designed in the 1970’s, It was due to be launched in 1983 but with technical issues, budget restrictions and the Challenger disaster, it was delayed for 7 years. Only when it was in orbit did they find out that the most perfectly ground mirror in history had been made with a tiny error in its shape, effectively making it short-sighted. It took a further three years before a fix was created and applied to finally get it working as it should.

The Hubble was designed to be serviced and upgraded in orbit and over the last 25 years, it has undergone five service missions. This was all done using the Space Shuttle and at the end of each service mission, the shuttle would move the Hubble to a higher orbit.

This is done because although Hubble is in orbit, the height of this orbit still low enough to be in the very, very thin upper atmosphere of the Earth and this creates drag which slows it down over time.

This slowing down causes the orbit to decay and become lower still which increases the drag which slows it more and so on and so forth and if nothing is done they will eventually crash back to earth and burn up.

The problem is, we no longer have the space shuttle to do any further service missions or boost Hubble’s orbit, so even if nothing else goes wrong, Hubble will eventually fall back to earth somewhere between 2028 and 2040.

This rather vague date is because it’s the sun activity that affects the expansion of the Earth’s atmosphere and ultimately the drag on Hubble and that’s something we can only estimate in the future.

It wasn’t planned to end like this, one of the scenarios was that the Hubble would be brought back to earth by the shuttle and to be placed in somewhere like the Smithsonian museum.

But with the Hubbles age comes random component failure. Earlier this year it was taken offline when the payload computer which was built in the 1980s stopped working. Engineers eventually traced the fault which turned out not to be the computer itself but the Power control unit which supplies the computer with power and is thought to be sending out an incorrect voltage and the computer’s failsafe shut itself down automatically.

Luckily, a was backup fitted in case of such a power supply failure like this but one day there might not be a backup and without a service mission, that could be the end for Hubble.

What will happen to Hubble in the end, is unknown, there have been ideas put forward to boost its orbit with specially adapted rockets but without something like the space shuttles payload capacity to return it to earth, it seems more likely it will end in a fireball crashing back to earth than in any museum.

While some like to think of the James Webb as Hubble’s replacement, the two are very different and NASA say it should be seen as its successor.

Hubble was built from on the same platform as a US Spy satellite and was designed to primarily operate in the visible to ultraviolet spectrum with limited infrared capabilities.

Using the information discovered by Hubble, the James Webb was designed to operate primarily as an infrared space telescope with a much bigger mirror at 6.5 meters compared to the 2.4 of the Hubble. This allows it to see far fainter, more distant, older objects, the light from which has been shifted from the Ultraviolet through the visible to the far-infrared. Infrared is also not blocked by dust clouds like ultraviolet, so the James Webb will see things that are hidden from Hubble.

At the orbit of the James Webb, it will stay in the same position relative to the Sun and the Earth so that its large solar shield will block the light and infrared from the Sun, Earth and moon from its highly sensitive instruments which operate at less than 50 degrees above absolute zero or about –223 Celcius.

And it’s this final position that is why the James Webb taking so long to literally get off the ground.

Unlike the Hubble, with or without the shuttle, if something were to go wrong with the James Webb, it would range from the extremely difficult to nigh on impossible to fix because we just don’t have any manned spacecraft capable of travelling that far out. It’s been estimated that if something did go wrong it could take 40 years before a craft and crew capable of getting there and fixing it would be available.

The James Webb was designed not to be serviced so everything has to work perfectly, which means testing, testing and more testing and even testing the tests. The memory of the Hubble fiasco which was basically down to a failure of testing looms large in the minds of Northrop Grumman the primary contractor and NASA, a failure here would be very hard to live down.

The other issue is that no one has built anything quite like the James Webb before. At the time of its conception at least 10 of the technologies required had yet to be invented. Things like the giant 5 layer sun-shield, the size of a tennis court that will take 2 weeks to deploy from its folded-up form. And it’s not only the detectors but also the sun-shield mechanical control systems that will have to work at less than 50 degrees above absolute zero.

Everything on the detection side of the telescope must be a cold as possible so as not to interfere with the tiny amounts infra-red light that the James Webb is looking for from the farthest reaches of the universe, from the first galaxies that formed after the big bang.

This includes the mirror which at 6.5 meters across has 6.25 times the light collecting area of the Hubble’s 2.4 meter mirror.

A single mirror this large wouldn’t fit in any spacecraft, so it’s made up of 18 hexagonal gold plated sections which are individually controlled to focus the light onto the sensors.

Inventing the technologies, ironing out the bugs and the exhaustive testing of these brand new ideas takes a lot of time and a lot of money and this is the other main reason why it has taken so long to get the James Webb ready.

Back in 1996 when it was conceived, the original price was $1bn and it was expected to be launched around 2007 but equally no one at the time actually knew how to build it and this was very much a best guess estimate.

As advancements in science and technology became available, more ambitious goals were set and the timeframe slipped and the price when up.

It’s been said that NASA projects like this are wildly optimistic and are pitched low, so as not to scare off potential funding, knowing that they can always go back and ask for more but as time went by the difficulties began to mount up and so did the costs.

This meant NASA had to keep going back to congress for more funding, which took more time and delayed the whole project. This repeating process has gone on and on until now when its total is expected to be just short of $10bn, $9bn for development and building and $810 Million for running the mission for 5 years.

The problem for the government is that if it pulls the plug, then not only will science be losing a highly anticipated tool but then they have spent billions with nothing to show for it which would in some ways be worse and makes it almost too big to fail from a fiscal point of view.

Some have said that it was all done backwards and that we should have built it with existing technologies that have a known price tag. The problem with this argument is that it would never have been built because we didn’t have the technology to do so and waiting for someone to invent it without an end goal just won’t happen. If this methodology had been applied to Apollo we would never have gotten to the moon.

So we may well be stuck with the price but the least NASA can now do is try and eliminate as many of the possible points of failure as they can. This will become the most highly scrutinised project in space history so far but they can console themselves that it looks an absolute bargain compared the $400bn for the development of the F-35.

So I hope you enjoyed the video and if you did then please thumbs up, subscribe and share and don’t forget that Patreon supporters get ad-free versions of the videos before they are released on Youtube.