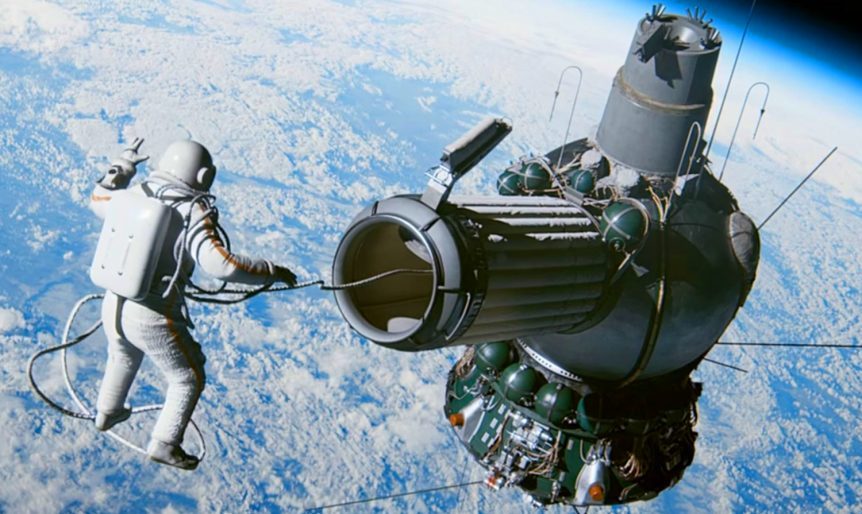 When Alexey Leonov made the world’s first spacewalk in 1965, it was hailed as yet another great success for the USSR in the space race against America. It was only after the fall of the Soviet Union that the west found out that while it may well have been made to look like a success by the Soviet Press, it was, in fact, it was teetering on the edge of disaster from the moment Leonov stepped out of the airlock till the crew were rescued from a desolate location in a frozen forest.

In 1961 Yuri Gagarin orbited the Earth to become the first human being to travel in outer space. Immediately on his return Gagarin toured the world again, this time grinning to international crowds as a celebrity ambassador for the Soviet Union. The Russians were apparently ‘winning the space race’, with 6 ‘Vostok’ manned flights between 1961 and 1963.

However, the pressure was on: the next Soviet space program had to maintain this momentum. The first plans to adapt the ‘Vostok’ capsule was originally named ‘Advance’, but eventually would be known as ‘Sunrise’, or in Russian ‘Voskhod’. In America, the ‘Gemini’ program was aiming to fly multi-crew missions, and astronaut Ed White was in training to make the first spacewalk, or ‘Extravehicular Activity’ (EVA). Sergei Korolev, the designer in charge of the Soviet space program, believed that they could still beat the Americans to the punch.

Adapting Vostok’s single-seat design, the first Voskhod capsule squeezed three ‘couches’ at 90-degree angles to the central spacecraft controls. The capsule was so cramped that the crew had to adhere to a strict diet just to fit into their seats. Designers considered every way to save weight or space: for example, the ejection seat mechanism was removed. This meant that if something went wrong in the first two and half minutes after launch, there would be no way out. This was undoubtedly a risky setup: Voskhod’s rocket was also adapted, a larger version of the R-7, uprated to reach the highest-ever manned orbit.

But the first flight of Voskhod in October 1964 was a success, and in the first months of 1965 Voskhod-2 was prepared and readied at the Baikonur Cosmodrome, Kazakhstan. On the morning of March 18th, 1964 Voskhod-2 lifted off, again setting records for speed and altitude in manned spaceflight.

Upon reaching orbit, cosmonaut Pavel Belyayev inflated a fabric airlock, a seven-minute process, after which Alexey Leonov climbed out to gain the first unencumbered view of the earth from 475km – 295miles in space.

Leonov attached an external camera to film the historic spacewalk and appears carefree on the footage. But off-camera, the first manoeuvres were clumsy: he pushed himself away from the spacecraft, and immediately entered a spin, jolting to a stop at the end of his five-meter (17-foot) tether.

A few minutes later, Leonov noticed that his space-suit was becoming misshapen, it was unexpectedly ballooning in the vacuum of space. His feet and hands were slipping out the boots and gloves and he realised that it might soon become impossible to re-enter the narrow airlock. He had only about 5 minutes of daylight before the craft would onto the night side and it would become totally dark outside the craft. Without referring to ground control, Leonov made the decision to slowly vented air from his suit, until there was less half the pressure remaining but this then led the risk to him suffering decompression sickness.

The low pressure worked and the suit regained its correct size, Leonov finally pulled himself into the airlock head-first when he should have gone in feet first causing him to struggle  as he tried to turn around in the narrow airlock. This extra struggling caused his body temperature to soar, approaching the danger-zone for heat-stroke.

Eventually, Leonov made it back into the capsule. Humankind had ‘walked in space’ for the first time, and ground control radioed their congratulations. Leonov’s relief must have been palpable: in a recent interview, he revealed that his spacesuit had been fitted with a suicide pill in case he wasn’t able to make it back in.

However, the danger was far from over. After Belyayev jettisoned the airlock, he discovered that the hatch wouldn’t seal properly. And worse, Voskhod’s automated climate control system was trying to compensate by increasing the oxygen pressure in the capsule. In this super-oxygenated environment, any spark could ignite an unstoppable fire: the very scenario which had already killed Valentin Bondarenko four years earlier as he was in training to become a Cosmonaut and that would also kill the crew of Apollo 1 in 1967. But Voskhod-2 was lucky: there was no spark, and the cosmonauts worked to lower the temperature and humidity, slowing the rise in oxygen pressure.

But this wasn’t the end of the problems with the mission, Voskhod was fitted with an automated re-entry system: but this failed to work. On the next orbit, the crew had to make a manual re-entry burn instead, something no one had done before and would give them little control of where they would land. They made the decision to try and land in the Taiga, a vast area of almost uninhabited forest in the far north of Russia.

The Voskhod was so cramped that after re-entry procedure was started it took 46 seconds for the two men wearing their space suits to return to their seats to restore the crafts centre of mass. This 46-second delay changed their trajectory and pushed the craft 386km from its intended landing point.

As the spacecraft began re-entry, the service module failed to separate, causing Voskhod to tumble back and forth until finally, the connecting straps burned up in the heat of re-entry.

During its descent Voskhod 2 flew right over Moscow’s Red Square, Leonov joked to Belyayev “We could land there if you want” before the craft flew further north and finally landed at 9:02 GMT on March 19th, in the thick, snowy forest of the Ural Mountains. As re-entry had been significantly off-course, no-one at ground control knew where they were. The crew had to spend the night in the woods in -25C, as they waited for their emergency radio transmissions to be located. The capsule’s heating system failed to work, and Leonov’s space-suit was full to his ankles with sweat, he later said it was so bad he lost 6kg during the flight. Wringing the moisture from their clothes as best they could, the cosmonauts watched for wolves until the recovery crew arrived the next day. But the area was so heavily forested the helicopter had to land 9km away and the rescuers had to ski to the Voskhod 2 craft with warm clothes, food and TV cameras.

Despite being hailed internationally for its success, the numerous failures of Voskhod-2 led to the cancellation of the program. Leonov’s famous spacewalk effectively marked the end of Soviet supremacy in space. The head of the Soviet space program, Chief designer Korolev died unexpectedly a few months later in January 1966: but the OKB-1 design bureau pushed on to develop ‘Soyuz’, a much more capable orbital vehicle which operated first in April 1967, and has proven itself to be the most reliable long-term ride into orbit to date.