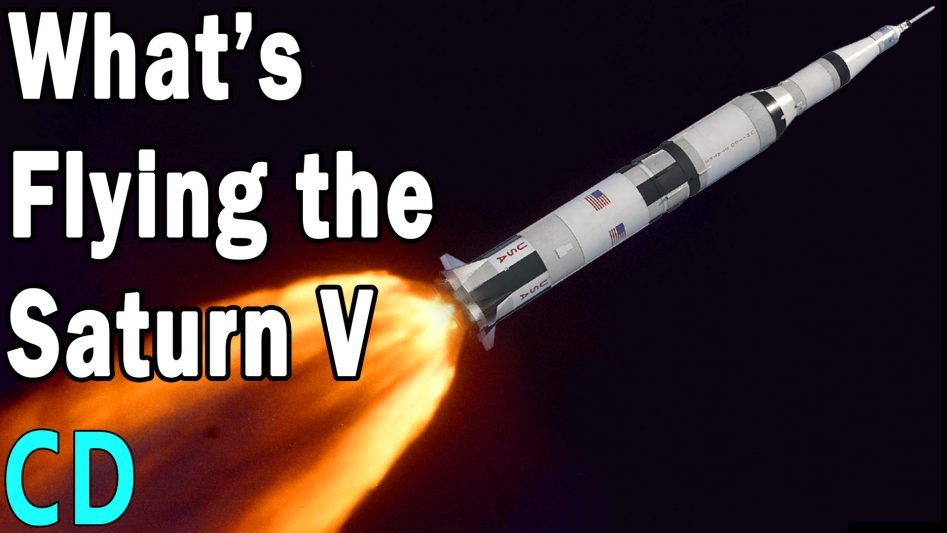 Watching a Saturn V launch is still an awe-inspiring sight but there is far more going on than meets the eye. The Saturn V was far too complicated to fly by hand but contrary to popular belief it wasn’t the Apollo guidance computer or AGC in the command module doing the job, it was a completely different computer and one which would probably a bigger impact on modern computers than the AGC, so what was flying the Saturn V rocket.

Now as we know that the computers used in the Apollo missions were just a fraction of the power of a modern smartphone and to many they just can’t believe that you could get to the moon and back with so little computing power but they did. You don’t need a massive computer to fly a rocket, in fact, you don’t need a computer at all, well not in the way they we think of.

The V2, the ancestor of the Saturn used gyroscopes linked to graphite veins that sat in the rockets exhaust to steer it and accelerometers that cut the power when it reached a predetermined height. As the distance and heading for the target was already known, the rest is pretty much physics following the trajectory curve, the same as firing an artillery shell.

But of course the Saturn was in a completely different league and much, much more complicated, so whilst it’s is doing a similar thing in going from its place of launch to a predetermined point above the earth at a certain speed, there was a lot of extra details and ultimately the lives of the astronauts were at stake too.

It’s not just the flying of the rocket that had to be done but also things like the monitoring of all the systems, telemetry between the rocket and the ground and emergency detection to name a few. This was all housed in a special section called the Instrument unit or IU. This was a ring-shaped section located between the third stage and the section that held the command module and the Lunar lander.

This ring measured 91cm high and 6.6 meters in diameter. In here was the Launch Vehicle Digital Computer or LVDC, the Analog flight control computer, that would take the signals from the LVDC and control the engines and flight controls, a stable gyroscopic platform, accelerometers, radar, telemetry, and four silver-zinc batteries to power the electrical systems.

When the Saturn V launched it would switch control from the ground computer to the LVDC to run a preprogrammed routine to put it in the correct position to roll the rocket to point it in the desired direction. Once in orbit, ground stations would track its position and speed so that the correct coordinates and engine burn duration time could be transmitted from mission control to the LVDC for the trans-lunar injection.

The LVDC also controlled and kept the 3rd stage steady whilst the command module performed the transposition and docking procedure of the lunar module once the vehicle was on course for the moon.

During the launch over 200 parameters were transmitted back to monitor vital systems as well as communications with the crew. The rockets attitude and speed were also monitored so that any slight deviations in the flight path could be detected and corrections sent back to the LVDC.

Now, when we see the Saturn V, it looks like one large sturdy structure but in reality, the Saturn is really a collection of fuels tanks held in three stages stacked on top of each other with powerful rockets on the base of each, all held together by an external framework, which also had to be as light as possible.

The combined total of these tanks held thousands of tons of liquid fuel and oxidizer, all subject to the forces of gravity and acceleration. They would also change their mass considerably from launch to their separation just a few minutes later. This made the vehicle aerodynamically unstable as the fuel was used up and the center of pressure and mass changed during the flight.

The body of the Saturn was like a flexible tube that would bend at frequencies from about 0.3 to 4hz as it reacted to the sloshing of the fuels and the thrust from the engines. The flight control system had to take this into account when adjusting and gimbaling the engines so that positive feedback loops didn’t build-up which could lead the bending oscillations becoming strong that they could damage the framework and ultimate breakup the rocket.

To help avoid this happening, the LVDC ran a major computation loop for the vehicle’s guidance once every two seconds and minor computation loop 25 times a second to control its attitude. These timings were chosen so as they wouldn’t coincide with the slosh and bending mode resonant frequencies. To highlight why this was so important you only have to see another structural but unrelated issue that occurred called the “Pogo effect” and resonant vibrations in fuel piping.

This is something which is well known about in rocket design and was particularly bad on the unmanned test flight of  Apollo 6. The phenomenon is called “Pogoing” because the whole rocket starts to vibrate longitudinally or up and down the length of the rocket, like a pogo stick. On Apollo 6 the vibrations caused some damage to the lunar lander docking structure even though one wasn’t on board and were so strong that it very nearly aborted the mission. A J2 engine on the second stage failed due to a ruptured fuel pipe caused by resonant vibrations and the wrong engine was shut down because of a mixup in the electrical wiring.

The “Pogo effect” occurs if there are sudden changes in acceleration due to variations in the engine trust. The fuel acting under the effect of gravity can move up or down either decreasing or increasing the pressure in the fuel lines and thus affect the thrust of the engines.

This can become caught in a cycle of slowing and surging acceleration which flexes the entire rocket body. If the frequency of this surging matches the resonant frequency of the rocket, a positive feedback loop can occur and the amplitude of the vibrations increases so dramatically that they can severely damage or even destroy the rocket.

The main cause of it in Apollo 6 was tracked down to the flexing of the X shaped cross member that held the F1 engines as well as the fuel pipes resonating and causing fuel pressure variations which started the whole process.

Because the power of the computers was nothing like what we have, things that would be done in software now were performed by discrete electronics circuits like Resistor Capacitor networks and delay lines when processing the signals that were received from the gyroscopes, accelerometers and other sensors before their values were processed by the computer. This again was done to remove the build-up of resonant frequencies between the rockets structure and the computer’s processing loops.

The LVDC computer itself was also a major step forward and operated in an entirely different way to the Apollo Guidance Computer which was built by MIT. The LVDC was built by IBM and not dissimilar to one of their commercial computers but with many architectural changes.

Whereas the AGC was designed to be crash-proof, by rebooting back to the same state as it was before a crash, the LVDC had built-in triple redundancy. Basically, every computation was done on three identical logic systems, split into seven consecutive pipelines. The three results of each stage would be compared against each other by a voting system, if all three were the same then that result would be passed on the next part of the pipeline.

If however there was an error and one of the three results was not the same as the others, that one would be ignored by the voting system and the results from the other two agreeing logic units would be used. By using this method the likely hood of an error in the calculations due to hardware was greatly reduced, one-third of the computer could fail and it would still operate correctly.

Something else the LVDC did was to compare the current results of a calculation to the last known good value, or what IBM called a zero and reasonableness test. If the result of a sensor reading or a critical calculation value suddenly went to zero or it jumped to a much larger value than the previous one in the computational loop, it would ignore this new data would use that last known good value instead.

This was done so that false data from a faulty sensor or computational error wouldn’t be applied to the flight controls as a sudden large change could cause the rocket to become unstable.

The stated reliability of the calculations done by the LVDC was 99.6% for a 250-hour mission or 99.9966% for a six-hour mission. Something which helped with this was the way it was built. It used newly developed integrated circuits or logic units as they were called. These contained a transistor or two diodes and a resistor and were surface mounted on thru-hole plated multilayer Printed Circuit Boards. In fact, the boards from 1966 look remarkably like modern PCB’s with surface mount components and 12 layers in the PCB, something that wouldn’t become commonplace in modern computers for decades and shows just how far ahead this system was.

One thing that was common between the LDVC and the AGC was the memory, they still used magnetic cores, the LDVC having 32Kb of RAM and a clock speed of 2MHz, giving it a speed of 12,190 instructions per second, a modern PC is about 1 million times faster. A total of 40,000 silicon semiconductors and resistors were contained in the simple IC’s which made up the main processor.

The PCBs that made up the LVDC were mounted in a magnesium frame and the chassis had liquid-cooled walls to help dissipate the 138W of power the computer used.

Should there have been a problem with the 1st stage in some way there was an EDS or Emergency Detection system. This could do one of two things. If it detected an imminent breakup of the craft it would trigger the automatic abort sequence, if it was less serious it would notify the crew for them to take the appropriate action but once the abort sequence was triggered it was irrevocable and would run to completion.

The last procedure that the LVDC performed was once the vehicle had reached the moon. This was to keep the undocked 3rd stage and the Instrument Unit away from the command module after which ones used on Apollo 13, 14, 15, 16, and 17 were directed to crash on the surface of the moon not only to keep them from colliding who the command module as it orbited the moon but also to act as a seismic event that would be monitored by seismometers that had been left by previous missions.

So whilst the LVDC was the unglamorous counterpart the Apollo guidance computer, its job was probably even more essential.