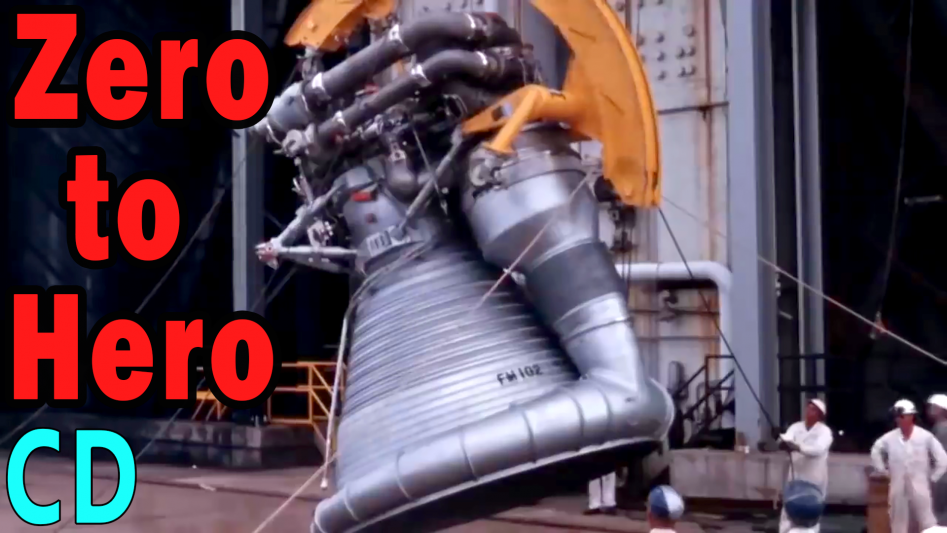 With the 50th anniversary of Apollo 11 coming up is easy to forget that the whole Apollo program was a ground-breaking succession of technologies but one was essential to literally get things off the ground. The Rocketdyne F1 engines would be the biggest, most powerful single-chamber rocket engines ever built but there was a point in their development where they were so unstable it was looking like they might never get anything off the ground, so how did the F1 go from a dangerous failure to 100% reliable.

The history of the F-1 goes back to 1955 when the USAF contracted Rocketdyne to build a very large rocket engine. Two were designed the E-1 and the much larger F-1 for what was seen to be a need for future rockets to be able to carry large payload like the emerging spy satellites. The E-1 was tested but dropped in favour of the F-1 but then that was also dropped shortly afterwards, and development was shelved.

After NASA was created in 1958 and need for manned space flight had been boosted by the launch of Sputnik by the Soviets, NASA and Werner von Braun who had also being studying a lunar mission for a while calculated that there would be a need for an engine with 1.5 million lbs of thrust to lift the required payload for a lunar mission, so Rocketdyne was contracted to continue the development of the F-1.

In its first full-scale test just before Yuri Gagarin’s flight in 1961, a prototype F-1 produced 1.64 million pounds of thrust proving the design.

But even early on the F-1 was exhibiting instability, something that wasn’t out of the ordinary in engine development and was would normally be fixed quite quickly. But in the F-1 it was different, it’s instability would plague the engine for more than seven years and would put the entire Apollo program in doubt if it couldn’t be fixed.

The F-1 was relatively simple engine design following in the footsteps of other Rocketdyne engines like the E-1, the Atlas MA-2 and the H-1 used in the Thor and Jupiter vehicles but its sheer size was were the F-1 stood out and it was this that caused the problem. Problems that were minor or not seen on smaller engines became major issues in the F-1.

No one had ever built an engine this large, some even said it wasn’t possible and in the 1950s rocket engine design was more of an art built on trial and error than hard and fast science. Computer modelling didn’t yet exist and theories derived from smaller designs didn’t scale well with the F-1.

In a rocket engine, the fuel which in the F-1’s case is RP1, highly refined kerosene and the oxidiser, liquid oxygen is injected into the combustion chamber, a barrel-shaped area under high pressure through an injector plate which in the F-1 had 2832 holes, each the size of a drinking straw.

The job of the injector plate was to bring the fuel and oxidiser into the combustion chamber at the proper mixture ratio, pressure, and spray pattern to initiate and sustain stable combustion.

But in the F-1 because the combustion chamber was so large at nearly a meter across, some areas could start to burn hotter than others because of inconsistencies of the fuel and oxidiser mix.

This uneven burning of the fuel created tangential spinning oscillations which were called the “racetrack” effect. These acoustic pressure waves would oscillate around the chamber like a racetrack hundreds of times a second forcing the heat and pressure in the chamber to run out of control within milliseconds.

This was termed “rough burning” and could create intense vibrations, the flame front could touch and burn the injector plate and in the worst instances, the vibrations would literally shake the engine apart. This happened during a test on June 28th 1962, the shock was so strong that the high pressure fuel ducts ruptured leaving it in an oxygen-rich operation which destroyed the entire engine.

The problem was also highly unpredictable and could be triggered by almost anything from fluctuations in the turbopumps to thermal shock from sudden temperature changes. The same engine on one test could experience little or no problems and on the next test, it would be so severe the test had to be stopped.

To tackle the problem, a team of 50 top engineers and technicians was set-up to try and tame the F-1 combustion issues and set work on the heart of the system, the injector plate. Here they set about changing the angle and pattern of the injector holes, each time testing the results. But by early 1963 two more engines had been destroyed and the problem was still there.

So they came up with a radical plan to try and beat the random nature of the onset of the instability by creating instability on demand, that way they could methodically go through the problem on their terms. They decided to place a small bomb inside the combustion chamber. They would hang a small heavily insulated black powered charge just under the injector plate that could be triggered remotely. When the engine was fired up the bomb was detonated and the shockwaves created the instability. If they could create a fix that stopped the effect of the bombs every time, they would solve the problem.

To dampen down the wild oscillations around the combustion chamber they placed baffles on the injector plate and changed the position where the fuels were mixed to further inside the combustion chamber. Although this decreased the number injectors and made the engine a few percent less efficient it was a price worth paying.

Hundreds of tests followed with 15 different baffle designs and changes to the injector angle and the point where the fuels mixed. Some changes made little difference, others made it better but in the end,  they arrived at a point were the instability created by the bombs would die down within 100 milliseconds.

After 3 years of work they had finally arrived a dynamically stable engine and in April 1965 the first test with five F-1’s mounted on the Huntsville test stand took place. All five worked perfectly producing a total of 7.5 million pounds of thrust for 6.5 seconds.

Although they didn’t know it yet, they had cracked the problem, from that point onwards the F-1 engines worked with 100% reliability.

In time, 65 engines on 13 flights worked perfectly but it had taken over 3200 full tests during the entire program and 2000 of those just to fix the instability. In the end, it was the most intensive and most expensive rocket engine development program in history without which the moon missions as we know them would probably have never taken place.

The instability problems of the F-1 were some of the most complex ever tackled in rocket engine design but creating instability with small bombs to find the solution, was just a measure of the ingenuity they used but luckily for us things have moved on a long way and now you don’t have to spend years of trial and error to get your desired results.

Our sponsor for this video, Brilliant.org is a problem-solving website for anyone that loves a challenge and is where you get to learn hands-on how to tackle problems by breaking them down into their basic parts, working on each bit then and combining them to find the overall solution.

You can download any of their dozens of interactive courses either on your computer or through the mobile app, and you’ll be able to solve fascinating problems in math, science, and computer science no matter where you are, or how spotty your internet connection.

What’s great about these courses is that they’re all totally interactive — you can experiment with pendulum clocks to master the physics of motion, or  learn and learn how much fuel you would need to get a rocket into space with the rocket equation

So if you want to support Curious Droid and get unlimited access to all of Brilliant’s in-depth courses, you can head over to brilliant.org/curiousdroid/ to get 20% off their annual Premium subscription.