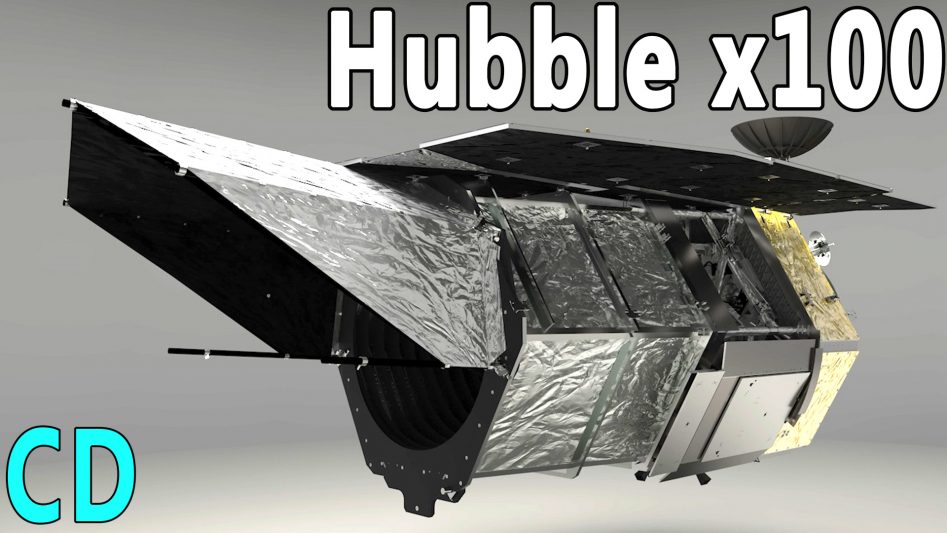 Space telescopes are expensive things to develop and build and can take years to finish, just look at the James Web Space Telescope, that started development in 1996 for a launch in 2007 on a $500 million budget, its now looking at a launch in 2021 and the budget has reached $10 billion.

So when NASA was looking to develop its Wide Field Infrared Survey Telescope, the next big new space telescope after the James Webb  and the National Reconnaissance Office or the NRO offered NASA two  second hand but unused what would have been spy satellites the same size as Hubble, it was an offer they couldn’t refuse, this is the story so far of NASAs new mega Hubble, the Roman space telescope.

The story of the Nancy Grace Roman Space Telescope more commonly know as the Roman goes back to 2011 when it was originally to be known as the WFIRST or Wide Field Infrared Survey Telescope but in April 2020 it’s name was changed to the Nancy Grace Roman to commemorate the first female Executive at NASA but why do we need another space telescope now we have Hubble and soon to be launched James Webb space telescope with it’s much enhanced capabilities.

Well, whist the Hubble has revealed more of the distant universe than any other telescope before, the amount of sky it can see in a single image is quite small. If you compare it to the size of the full moon in the night sky, then the patch of sky Hubble would see will be about 100 times smaller.

The famous Hubble legacy field image is one of the widest high-resolution views of the universe taken so far and is made up of nearly 7500 Hubble images taken over 16 years but is only about the size of the full moon.

Roman was designed to take images of the universe which would have the same resolution as Hubble but be 100 times larger. Doing large surveys of the night sky with Roman will dramatically cut down on the time taken. It’s been estimated that in the first five years of operation, Roman will collect images covering about 50 times the amount of sky compared to what Hubble has done in its entire 30 year life. As its the same resolution It will be like having a hundred Hubble’s all working together, large surveys that would take Hubble literally hundreds of years to complete could be done in just a few years with the Roman.

So instead of trying to guess where the best place to look might be, it can just image large amounts of sky and reveal interesting objects which can be looked at in more detail with the Hubble and or the James Webb.

Roman may have a 100 times the Hubble’s viewing power but the original Hubble can still do one thing that neither Roman nor the James Webb can and that look at objects in the Ultraviolet spectrum , something that can only be done properly outside of the Earths atmosphere and provides essential information about the formation of Galaxies.

But there is also the issue that Hubble is coming to end of its working life and even if it has its orbit boosted and it can be serviced with one of the new crewed spacecraft it only has about 20 years left.

In its first 2011 incarnation, WFIRST, as it was known, was going to use a 1.3-metre mirror and have just one instrument, a visible the near-infrared imager.

However, in August 2011 the National Reconnaissance Office, the agency which looks after Reconnaissance satellites used for things like Earth surveillance and classified observations, offered NASA two satellites which had been built for the NRO by the Harris Corporation.

These had a 2.4-metre mirror the same size as the Hubble and as such it could gather 4 times the amount of light compared to the 1.3 metre mirror and have double the image resolution. As they were originally designed to look down at the earth,  the field of view is much wider than Hubble’s but that also worked well for the purpose of WFIRST, to see large areas of sky in a single image.

The one stipulation was that these NRO satellites could not be used for Earth surveillance as that could reveal too much of their classified origins.

Some have said that the NRO satellites may be part of the KH-11 Kennen line of spy satellites first used in 1976 and still highly classified, what we do know is that they were built for the NRO’s Future Imagery Architecture program which was cancelled in 2005

The 2.4-metre mirror in the Roman is the same size as the Hubble and made from ultra-low expansion glass but weighs only one-fourth of the weight. NASA has had the mirror reshaped to work better for the mission and it is covered in a silver coating two hundred times thinner than a human hair to better reflect the near-infrared light.

During its repolishing, the average size any bumps on the surface were reduced to 1.2 nanometers tall. If the mirror was scaled up to the size of the earth these bumps would just over 6mm high.  Because it’s so much smoother than required it the scientific benefits will be even better than originally planned.

To make the most of the large mirror, Roman has two instruments, the Wide Field Instrument and a Coronograph. The Wide Field Instrument uses a new CCD sensor array with just short of 302 Megapixels. To give you a comparison to the Hubble, it has two sensors, one for the visible to ultraviolet spectrum which has 16.7 megapixels and the near-infrared sensor which is 1 Megapixel. The new CCDs are more sensitive to infrared radiation and therefore will be able to see older and more distant objects than Hubble can now.

Even the James Webb with a much larger 6.5 metre mirror has two much smaller sensors of 33.5 Megapixels and 8.3 Megapixels.

The reason why the Roman and James Webb look mostly in the near infrared spectrum which is almost invisible to our eyes and we feel it as heat instead, is that’s where the oldest light from the farthest objects in the universe is now.

As the universe has expanded since the big bang the light from the first galaxies which was in the ultraviolet and visible range when it set off has been stretched out along with the universe so much so that it now appears to us as near infrared.

In 2016, Hubble discovered the Galaxy GN-z11, the oldest and farthest galaxy in the known universe and although the light is 13.4 billion light-years old, when its properly adjusted for the redshift to compensate for the expansion of the universe in that time, the distance is approximately 32 billion light-years away. Both the Roman and James Webb will be able to see even farther, older objects when they are in service.

Survey mapping of larger areas covering millions of galaxies also will help with more accurately determining the rate of expansion of the universe and hopefully shed more light to the excuse the pun on whats believed to be the primary driver behind it, dark energy.

It could also reveal the earliest sounds waves, the baryon acoustic oscillations from the early universe when it was still a soup of hot plasma and that are believed to have influenced the distribution of the galaxies as the plasma cooled to form the first atoms, then stars and eventually galaxies.

Again the Roman can do this much quicker than Hubble could ever do. In a survey of the Andromeda galaxy, it took Hubble over 650 hours spread out from 2011 to 2013 to map the area outlined in teal but the Roman could cover the same area in three hours or less.

Roman’s second instrument is a coronagraph, this is designed to look for Jupiter sized exoplanets around nearby stars by blocking out the light from the star whilst looking for the reflected light from the planet, a tall order when the whole star system might look like just a point of light to us here on earth.

This is only the third coronagraph to be flown into space, the others are on the Hubble and James Webb but the Roman one will be between 100 – 1000 times more capable. This is also intended to be a technology demonstrator for future coronographs that will one day be able to image earth-sized rocky planets as a single-pixel from stars tens of light-years away.

The flexible mirrors in the Roman coronagraph which operate in realtime to correct for tiny errors in the telescope’s optics are so precise they can compensate for errors the width of a strand of DNA. These plus high tech masks bend the light from the star around light blocking elements, the result is the blinding starlight is dimmed to a billionth of it’s original level to reveal any previously hidden planets.

But in order for the Roman to be able to capture the infrared radiation from very oldest farthest objects and make sure it doesn’t get lost in the infrared heat from the Sun and the Earth, it will be much farther away at what’s called the L2 or second Lagrange point about 1.5 million km from earth where the gravity of the sun and earth cancel out the centrifugal force of its the orbit.

Here the Roman will also be in a synchronous orbit around the Earth. At this far more distant point from earth than Hubble is, the orbit is more stable and there is less infrared radiation from the Earth. This will help to keep the telescope and sensors as cold as possible and means that it has a ten-fold reduction in infrared heat contamination compared to the 550km orbit of the Hubble above the Earth.

But what of the second NRO satellite, that hasn’t been assigned any plans or funding yet though there are plenty on suggestions including studying the Earths upper atmosphere and aurora’s to asteroids and other faint solar system objects or maybe sending it orbit Mars and produce a high-resolution map that would be four times finer than that of the current Mars Reconnaissance Orbiter.

If it were in orbit around Mars it would also be better placed to observe the asteroid belt and the outer solar system but only time and funding will tell where it ends up.

The Current launch data for the Roman space telescope is 2025 and despite the cost overruns in the James Webb program slowing its progress, as of 2019, it was still on target to meet that date.

And to close the video, I would also like to say a big thank you to all our Patroens and their ongoing support.