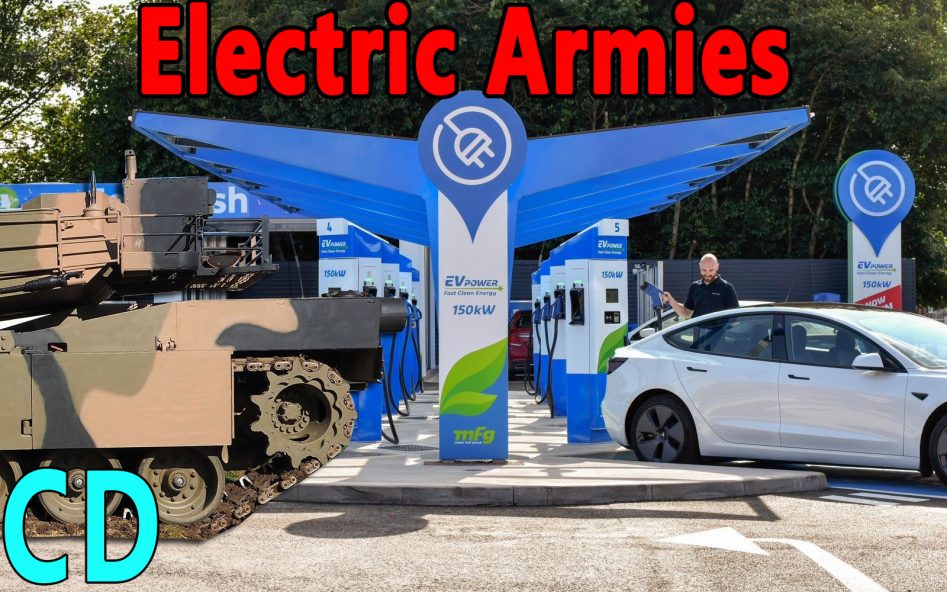 As many will have seen recently and in particular since the rapid rise in petrol and diesel prices, sales of electric cars are booming with year to date sales in 2022 of Battery Electric Vehicles up to 14.4% and if you add plugin hybrids it’s up to 21% in the UK. That’s up from a total of just 3.2% just 3 years ago in 2019.

In the US where gas is king, EV sales may be lower but have still doubled from 2.5% last year to 5.2% so far this year.

In the UK, Amazon has announced trials of five electric 27-ton heavy goods vehicles on medium-distance runs to bolster its 1000 electric local delivery vans. In 2021, Amazon delivered 45 million parcels in the UK with its electric vans and e-cargo bikes.

In the US, Amazons main market, they have pledged to buy 100,000 electric vans and 2500 pure electric HGV trucks.

So if the worlds largest retailer is going electric what about the biggest single consumer of fossil fuels, the US military, and other militaries around the world, will they go electric and if so what are the challenges ahead.

After seeing what’s happening in Ukraine, most people would be hard-pressed to imagine electrically powered tanks and other heavy military vehicles.

In the UK the biggest issue facing EV drivers is finding a charging station that is working and is compatible with your vehicle.

Imagine how charging might work in a war zone where the electrical supply has been cut. You would have to rely on mobile charging systems that would have to generate the power using you guessed it, diesel or jet fuel for turbine-powered generators.

That’s seems like it would defeat to the whole object of electric tanks etc when you could just put the same diesel directly into a normal combustion-engined one.

But that’s exactly what the US and other militaries are looking into, so let’s see why they are doing this.

Well, firstly there is the greenhouse gas issue. Climate change however you look at it is real and happening now and threatens everyone.

However, the amount of CO2 being pumped out is probably at the bottom of the list of things on the minds of soldiers and military in a war zone.

The second is the fact that most of the weapons systems like tanks have very inefficient engines and huge weights making their fuel efficiency almost in the gallons per mile range but to be fair, when they were designed, sometimes decades ago, the price of fuel was much lower and little to no costings were allowed for its transportation.

The much-lauded Abrams M1A2 tank uses a 1960s-design 1500 hp gas turbine that can propel it around a battlefield at just shy of 30mph and does about 0.5 miles per gallon.

But much like every other tank in a combat situation 60-80% of the time, it’s sitting with its engine idling at 1% efficiency to run a 5kw generator to power mostly air conditioning and electronics and all the while pumping out heat making them easy to spot with modern IR cameras. If the consumption at the front end could be reduced, then the much larger logistic operation following them could be reduced which would have a much larger impact.

For a US army armoured division with all its vehicles online and moving, it can consume upto 500,000 gallons or just shy of 1.9 million litres of fuel per day, which becomes a huge security and logistics challenge. Of the gross tonnage moved around by the US army, 70% of it was fuel and most of that is shipped over from the US and then distributed to where is its needed.

Tanks and personnel carriers can only advance as far as they have fuel supplies and the logistical challenges of keeping them fuelled is one of the biggest issues for the military.  The cost of moving fuel by trucks  to the front line is far greater than the cost of the fuel used by the fighting vehicles themselves and can increase by as much as 500 times if helicopters are needed to do this.

A vehicle with an electric drive train powered by batteries or a hybrid system would be far more efficient and produce a fraction of the heat whilst it’s idling or on silent watch.

But are we likely to see electric tanks any time soon? The principle of using an electric drive train in a tank is not a new one, electric motors were used in prototype tanks going back to the first world war with the US-made Holt Gas Electric tank.

This was the first prototype tank built in the US in a collaboration between  Holt Manufacturing Company, now Caterpillar and  General Electric.

It used the chassis from a Holt Model 75 tractor with a 90 horsepower 4 cylinder engine driving a GE generator which powered two electric motors one for each track.

However, during testing, it was found to have poor climbing performance compared to the tanks built by the British with all-around tracks and was much heavier than planned because of the complex propulsion and transmission systems which pushed it up to 25 tons and slowed its speed to 5 mph.

Only one was built but development was abandoned after the poor test performance.

The Petrol-electric hybrid drive principle was taken up again in WW2 by Ferdinand Porche with the VK 45.01 (P) also known as the Porche Tiger Ferdinand. This was a heavy tank weighing in at 45 tons and sporting a 88mm main gun.

The main power came from twin air-cooled V10 petrol engines, each one driving a 500kVa generator which in turn powered a 230kW electric motor, one for each track.

However, this was a new and untested design compared to a conventional drive tank and there were major issues with the reliability of the air-cooled engines and it required frequent maintenance. Its performance was also poor due to its weight distribution, especially over soft ground.

The generators also used a lot of copper in their construction with was in short supply and in competition with the generators which were used in German U-boats.

In the end, the conventional diesel-powered Henschel version of the Tiger was approved for production though 90 preproduction Porche Tigers were made and these were adapted for other uses.

Today there are several hybrid fighting vehicles in development in particular the Bradley which is a tracked multipurpose vehicle capable of carrying troops and acting as a backup for main battle tanks.

In January 2022 the US army demonstrated a hybrid-powered Bradley for the first and going forward it will be tested throughout the year. The army says that’s the hybrid drive will allow reduced fuel consumption and increased range and the ability to export 1100kW of electrical power with less maintenance and fewer parts.

It can also stand on silent watch without the need to have an engine running reducing it’s heat and sound signatures.

So what about going the whole hog and making fully electric fighting vehicles. As we have seen the electric powertrain can be done and today’s electric motors are much more efficient at 85-90% compared internal combustion engines at 17-21% but it’s the batteries that are the issue or more accurately their energy density.

The energy density of modern lithium-ion batteries is about 1MJ per kg compared to diesel fuel which is 45MJ per kg but here much of that advantage is lost through the inefficiency of conventional combustion engines.

To replace the 1500hp of the gas turbine in the Abrams you would need a battery capable of delivering 1100kW which would weigh about 1.1 tons, compared to about 100 kg of kerosene. To run for 8 hours you would need a 8000kW battery weighing about 8 tons and taking up a more space than the fuel tanks. This would make the tank which already weighs 72 tons too heavy to be carried by a C-17 transport palve which has a maximum payload of 77.5 tons  and once in the field it could be too heavy for some bridges and struggle on soft ground.

But the real killer is charging the batteries without access grid power, even with the fastest 350kW chargers today, charging 8000kw of batteries would take 22 hours. To charge in 4 hours would need 2MW chagers which would still be too long for use on the battlefield.

So if electric vehicles are to be used then they will need to be quite a bit smaller but no less lethal.

In 1982 the US army conducted a little-known experiment in the desert pitting 30 normal tanks against 30 Baja-style dune buggies armed with precision guided anti tank munitions.

The result was 27 dead tanks to 3 dead dune buggies, simulated of course,  a result that predated what we have seen in Ukraine by 40 years. Namely lightly armed infantry using the latest anti-tank weapons decimating enemy tanks and helping them to do this are electric bikes.

Carrying up to two people with armaments, the simple, lightweight and effective battery-powered bikes built by Eleek in Ukraine are enabling snipers and tank hunters to sneak up on their prey fire and then get out quickly and quietly before the Russian artillery bombard their position.

This is nothing new, in WW1 push bikes were used on mass and in WW2 the allies dropped bikes with paratroopers which enabled them to quickly and silently scout ahead of the main battle groups.

At least five Militaries around the world including  Denmark, the United Arab Emirates, New Zealand, and Australia are looking at E-bikes for special forces that can be dropped with paratroopers or attached to larger vehicles and feature removable battery packs and things like solar charging in the field. The Norwegian Army was the first to use E-Bikes to patrol the Norwegian-Russian border in 2018.

But electric vehicles don’t have to be driven by a human, autonomous or remote control fighting vehicles are also being developed. The Ripsaw M5 by Howe & Howe Technologies is one such remote-controlled light tank with an electric power train that is being evaluated by the US Army and been seen in many action movies recently.

The tank is built with a modular design to be tailored to a wide variety of uses and future-proofing for tasks not yet envisaged.

It has up to 1600 hp electric drive and can use a 30mm canon and guided anti-tank munitions, is fast at up to 65km/h, creates little to no heat and is silent apart from the noise of breaking branches and trees.

In army evaluation tests it was remotely controlled by a modified Bradley Fighting Vehicle enabling a sort of loyal wingman type of role as seen in robotic aircraft. They were fitted with a Norwegian Protector RT40 turret with a 30mm automatic cannon + M240 machine gun,but different turrets and weapons systems could be fitted as required for the mission profile.

This was the first time a medium calibre weapon was being fired from fully a robotic platform without  any onboard humans in live fire trials and if successful could be rolled out to a wide range infanty support and back up roles being able to go where larger veicles could not and when fitted with advanced anti tank munitions could be a very potent weapons platform.

So whilst we may think of electrifying large fighting vehicles as being the way forward, Ukraine has proved what some have thought for a long in that some of the most effective electric vehicles from a cost-to-performance perspective are some of the smallest and their needs to be major rethink of how conflict in the 21st century will be fought.

So I hope you enjoyed the video and if you did then as I have said many times before please thumbs up, subscribe and share and thank you to all our patreons out there for their ongoing support.