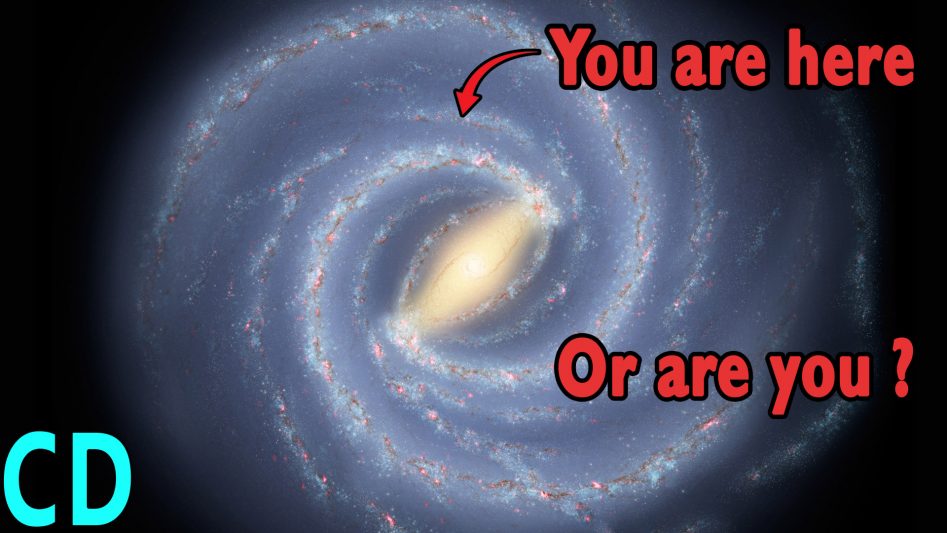 This is what our galaxy looks like and where we are in it, or so we are told because this is a side on view from what would be about a million light years away.

Now clearly we have a problem here because the farthest manmade object capable of taking such an image is the Voyager 1 which is currently after over 44 years of travelling through space is now over 23 billion km from earth, sounds like a lot but its actually only 0.002 light years. It will take voyager another 17,700 years or so to reach just one light year from earth.

So considering that we are deep inside in the Milkyway, how do we know what it looks like from the outside and where we are in it?.

It’s been said that trying to know what our galaxy looks like and where we fit in amongst the 100 billion or so other stars is like trying work out the shape of a massive forest whilst being tied to one of the trees.

All the images we see of our Milkyway from a distance are just an artist’s impression or a computer simulation so we must have some solid evidence from which to make such images.

But we can get some clues as to the general structure just from looking up at the night sky.

Firstly we can see the fairly narrow band of bright hazy stars that circles the sky, the thing we call the milky way which indicates that we are in a flattened disk of stars and not in a sphere because if that was the case we see many stars more equally distributed in every direction.  Also because the band of stars bisects the sky, we must be in the plane of the disk and not offset above or below it.

The first person to try and map the sky was the British astronomer William Herschel in the late 18th century.

He did this by counting the number of stars and whilst this produced a rough map of the heavens what he didn’t know was the distance to those stars and that wouldn’t be known accurately for another 120 years or so.

He came to the conclusion that we live in the centre of a gridstone shaped galaxy. However, he was not aware of the dust particles that block visible light from the farthest parts of the milkyway, so was not able to see the full picture.

Up until about 100 years ago, it was thought by many astronomers that everything we saw in the night sky was the entirety of the universe and made from stars, dust and gas and things like nebula and what we now know are galaxies were all within the milkyway, effectively the milkyway was the universe.

But some astronomers questioned that idea because with the increasing power of telescopes it allowed them to study the faint patches of light or nebula that could be seen in the night sky in greater detail.

Initially, these had only been thought of as areas of gas where new stars formed but others believed that these were completely separate and contained huge numbers of stars and were at great distances from earth.

The problem was that we didn’t have an accurate method of working out the distance to the stars or other objects in the night sky.

Stars vary greatly in both size and brightness and the one of the main ways we could assume thier distance was by how bright or dim they appeared. The issue here is a large bright star at a great distance could look similar to a dimmer smaller star closer to home.

In 1908, Henrietta Swan Leavitt an American astronomer was working on cataloguing the brightness of variable stars in the Small and Large Magellanic Clouds which are satellite galaxies of the Milkyway.

She catalogued 1,777 Cepheid variable stars recorded on photographic plates taken at know time intervals. These variable stars are so-called because their brightness cycled up and down over times ranging from days to months.

What she noticed was that the brighter these variable stars were the longer the period of their varying brightness would be.  On looking at the 1777 Cepheid variables she was able to draw a straight line that linked the fastest periods to the dimmest stars and slowest periods to the brightest stars.

Once this was known, astronomers had what is called now a “standard candle”, namely stars with known brightness from which they could work their distance from the earth by how bright they were and this allowed astronomers to measure distances of up to 20 million light-years, far greater than anything before.

When Edwin Hubble discovered a Cepheid variable in the Andromeda nebula in 1924, it proved that it was a completely separate entity from the Milkyway at a distance of some 2.5 million light-years and was a large galaxy in its own right therefore the universe was much bigger than just the Milkyway. This had been suggested as far back as 1775 but few had believed in the idea.

So if Andromeda was a galaxy in the shape of a flattened disk of stars then maybe our galaxy could be similar but where are we in it.

One of the people who originally believed that everything we saw was in the Milkyway was Harlow Shapley. Earlier in his career, he realized that the Milky Way Galaxy was far larger than previously believed and like the Copernican principle, that our sun and our place in the grand scheme of things was not at the centre of the solar system, galaxy or the universe.

If we are in the centre of a globular cluster, the nearest star to our sun Proxima Centauri would 13 times closer at just 1/3 of a light-year.

Shapley found that these globular clusters are spherically distributed around the galactic core and determined that the core of the Milkyway was in the constellation of  Sagittarius.

He believed that Milkyway was much larger than we thought but everything we saw was a part of it, including things like the Andromeda nebula.

But after Hubble’s evidence conclusively proved that wrong he became a convert and between 1925 and 1932 went on to map 76,000 galaxies and was one of the first to believe in galaxy superclusters discovering one that is now called the Shapley supercluster.

One of the main methods he used was parallax which is similar to the way we use our two eyes to see a 3d image of the world and give us the ability to perceive depth and distance of an object.

Because the stars in the night sky are so far away, our normal stereoscopic vision doesn’t work, our eyes are too close together, for that we need the ability to take two images but separated by millions of km.

By using the position of the earth as it orbits the sun we can take images of the night sky up 300 million km apart as the earth travels from one side of the sun to the other.

At these distances, we can see the difference in the position of a target star relative to stars in the background that are much farther away. Then using basic trigonometry the distance to stars can be calculated. However, this only works for stars that are relatively nearby up to about 3200 lightyears, just over a 10th of the distance to the galactic core, beyond that the parallax angle becomes too small to measure accurately with current technology.

To measure the distance to the globular clusters which are much farther away was done using the whole cluster instead of just a few stars inside it and knowing that they are compact structures.

One of the things that hampered the measurement using ordinary stars in the galactic plane was that most are hidden by the dust that lies in the space between the stars. The globular clusters are outside of the galactic disk and therefore are much easier to see at a distance.

It’s now thought that nearly all spiral galaxies like the Milkyway have a galactic bulge at the centre with globular clusters surrounding it in a halo.

With the advent of more advanced infrared photography, we are now able to see through much of the dust and have been able to for the first time photograph the supermassive black hole at the centre of the galactic bulge.

Using this method we can see more ordinary stars to get better measurements and by combining all the previous methods including mapping billions of stars in night sky and then remapping them months or years later we can see the natural movement of stars and extrapolate the distances from this data and quite accurately build up a map of the Milkyway and where we are it without moving father than the orbit of the earth around the sun.