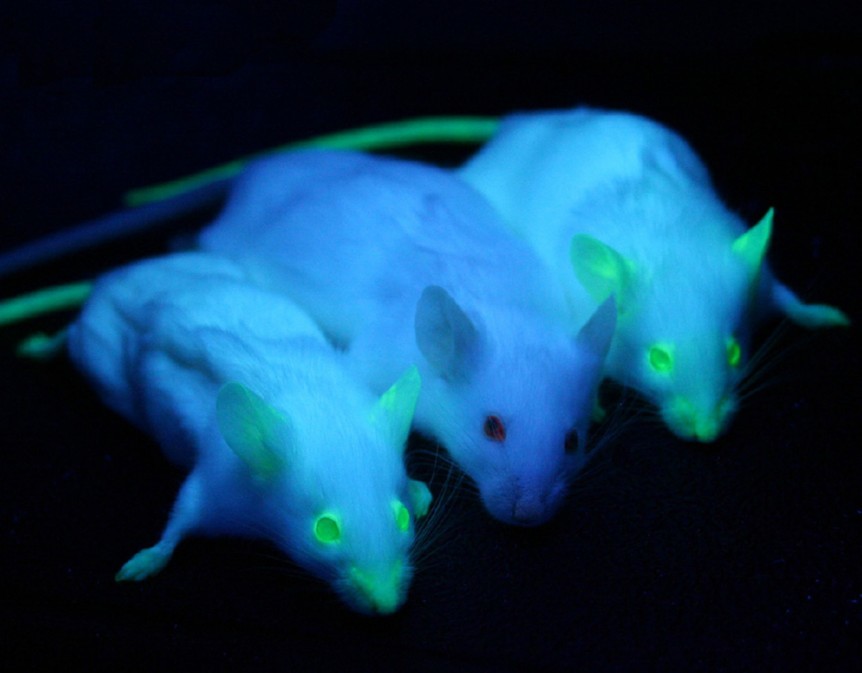 Over the past 30 years, biotechnological developments have allowed scientists to alter the genetic make-up of bacteria, plants, and animals, here are 7 of these such experiments but this just the tip of the iceberg.

As there is not cure yet, to deal with this option scientists have created what are called “sudden-death” genetically modified mosquitos which are released in the wild and breed with the indigenous mosquito population.

These then pass the special gene to their offspring. This gene means that the baby mosquitoes die before they themselves could breed and thus Reducing the number of mosquitos that could go on to infect people.

Trails in specific areas showed up an 80% decrease in the mosquito population for 3 months after initial release.

The glow-in-the-dark cat was developed as a way to fight feline immunodeficiency virus (FIV), which is related to HIV and typically affects feral cats. In 2011 American and Japanese scientists inserted genes in cats to help resist FIV.

In order to mark the cells more easily, they also inserted a green fluorescent protein and both genes transferred to feline eggs.

This let the scientists examine how this resistant gene developed within the cats by examination under a microscope. The modified cats are always normal during the day, but sometimes glow at night.

When it comes to natural goods, flexible and strong spider silk is incredibly valuable.

For instance, due to its strength and elasticity, spider silk fiber could have applications in bulletproof vests and improved car airbags, parachute cords, artificial ligaments, and everything in between

Normally, getting enough spider silk for these applications requires large numbers of spiders. However, spiders tend to be territorial, so when the researchers tried to set up spider farms, the spiders killed each other.

So They inserted silk-making genes into the mammary gland cells of goats, the cells then make the extra protein to make spider’s silk. The milk can then be collected and the protein is extracted and spun into spider silk thread.

Sometimes there is no defined end result for the genetic tweaking involved, and this is what happens with the Japanese Evolved mouse project. It’s bit like add some extra genes and see what happens when the results of the experiments are allowed to breed.

While checking a new litter of mice one morning, researchers discovered one of the baby mice was “singing like a bird.”

They focused on that mouse and have breed over 100 mice that can now sing But it doesn’t end there, they noticed that when normal unmodified mice grew up around singing mice, they too began to use different sounds and tones, almost like a simple language.

The project’s goal is to artificially speed up evolution and as we know evolution works when mutations occur and survive to become the next step.

As to what use they might be is unknown but we may have just created a super talking mouse that will go one to take over the world and experiment on humans in the future.

For all you meat eaters out there that love bacon and hate the vegetables, Japanese scientists have taken pigs and added a gene from spinach, this creates healthier meat with lower a saturated fat content and contain proteins that are found in the spinach leaves

Dubbed “Popeye Pigs,” these pigs have been inserted with a spinach gene that converts saturated fat into unsaturated fat . Although the pigs have been cleared of any health complications, their announcement was met with public outcry.  May be a better solution is just to eat more greens with your organic pork instead trying to create pigs that do both.

Sometimes advances can look pretty a bit like r einventing the wheel and this is what we have here, cows that have been modified to create human milk, Babies could be fed on ‘human’ milk produced by cows in the wake of the latest genetic modifications.

Scientists have created cattle that have been given human genes to make their milk contain the same nutrients and fat content as breast milk.

However, Human milk differs from cows’ milk in several important ways. It contains high quantities of nutrients beneficial to a baby’s growth and immune system antibodies that are specific the that mother and baby which can never be replicated in this way

In 1999, scientists at the National University of Singapore were working with a gene called green fluorescent protein (GFP), originally extracted from a jellyfish, that naturally produced bright green bioluminescence.

They inserted the gene into a zebrafish embryo, allowing it to integrate into the zebrafish’s genome, which caused the fish to be brightly fluorescent under both natural white light and ultraviolet light.

The idea was to develop a fish that could detect pollution by fluorescing in the presence of environmental toxins.

What Happened to NASA’s Gateway to Space – Launch Complex 39