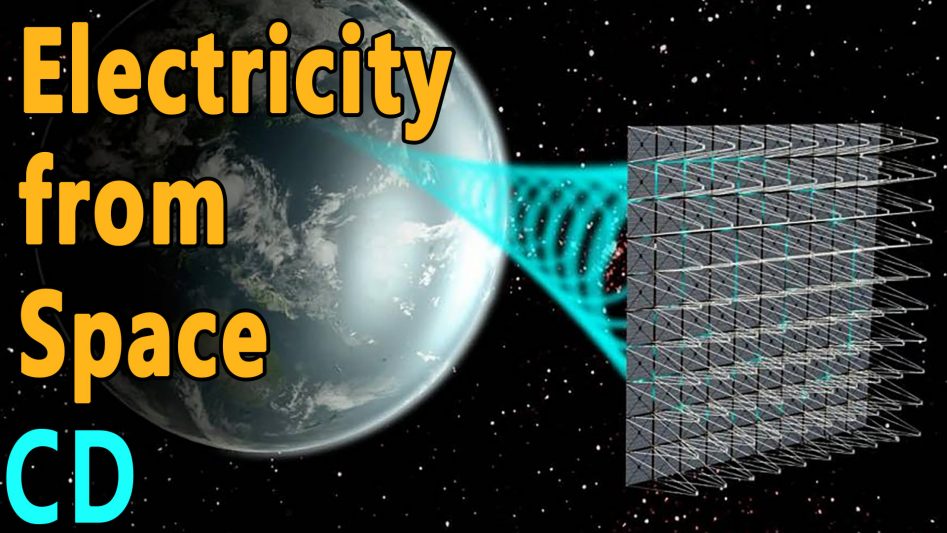 As our need for Electricity increases, solar power is increasingly seen as the future of renewable, green electricity generation. Every hour more solar energy reaches the earth than the whole world uses in a year. But it has two big drawbacks, our atmosphere, 30% of the suns energy is reflected before it hits the ground and of then course nighttime, no Sun, no power. In the northern latitudes where most of the power is used, winter nights are long, dark and cold and that’s exactly when you need it.

But If we were to move the solar power stations into space, the suns energy is not only stronger, its available 24 hours a day. So will we get our power from space in the future and what’s it going to take to do it.

So what is a space-based solar power station? Well, the basic idea is similar to solar power stations or solar farms on Earth. Large amounts of solar panels capture the uninterrupted suns energy and convert it into electricity. This is then used to create a microwave or LASER beam which is pointed at a specific receiving target on earth. When its recaptured here on earth the microwaves or LASER light is then converted back into normal electrical energy where it can be fed into the supply grid.

The beauty of this is that the energy could be beamed to remote places where the conventional power grid might not be available and there are no greenhouse emissions or pollution.

Now, Space Power Stations are a not new Idea, the first mention of them was in Issac Asimov’s 1941 sci-fi short story  “Reason” in which a space station supplies energy to the planets by microwave link. The microwave link borrows from Nicola Telsa’s idea of transmitting power wirelessly. But of course, at that time we hadn’t reached space so it remained just a sci-fi story.

But by 1968 we were in the midst of the space race and the technology had moved on enough for the Czech born American scientist and aerospace engineer Peter Glaser to put forward the idea of a satellite solar power system and in 1973 he patented a method of transmitting power from space to the earth’s surface by microwaves.

The idea has been bandied about since the 1970s but the costs of just getting the materials into space to build a big enough solar collector have vastly outweighed even the most expensive renewable earth-based systems let alone the technical challenges of beaming back gigawatts of energy.

But technology doesn’t stand still and in the intervening years, both it and the cost of getting into space have changed dramatically. SpaceX is proving that the cost of access to space is no longer the biggest hurdle and space technology has come a long way in making the components much smaller and lighter. So what was once a pipe dream is now being seriously considered by some countries around the world.

Now I can almost hear the cries of “What, high power microwaves and LASERS” this looks a like a death ray pretending to be a peaceful power system so its worth explaining why these methods are chosen.

Now back on earth if you build a solar power station all you need to do is to connect its output to the electricity grid is to wire it up using electrical cabling. But if your solar power station is up to 36,000km away in space in a geosynchronous orbit or even in low earth orbit you can’t connect it by wires but you can transmit the power using another medium.

Now, radio waves are not just for receiving you favourite satellite channel or connecting your smartphone to the internet, they are electromagnetic energy and if you transmit them in the right way with enough power you can capture most of that radiated energy with the right receiver.

But you cant just broadcast radio signals everywhere, you would lose the vast amount energy as it spreads out on all directions, so it has to be focused into a beam like a torch focuses the light from its bulb.

Beaming the signal from space poses two issues, the greater the distance the more the beam will spread out so a station in geosynchronous will have a beam much wider when it gets to earth than on in low earth orbit. Then there is the earth’s atmosphere which depending on the frequency of the radio signal can have a major impact on how much energy will be absorbed before if it makes it to the receiver.

There are two methods of transmission that could be used, one uses a LASER light which would be low earth orbit and the other uses microwaves which would be farther out in geostationary orbit.

LASER light is highly focused which is good, the width of the beam would be just a couple of meters across so both the laser transmitter and the receiver on earth would be small. A 1GW LASER could be as small as 1 meter across.

Solar power stations in low earth orbit about 400km would also be easier and cheaper to deploy and repair if required. By using near-infrared LASERS the beam would be mostly unaffected by the atmosphere too. One problem about being close the earth is that would it’s orbit the earth once every 90 mins so you would need multiple stations around the world where the LASER could be beamed down to. It would lock on to one then as it moved around the earth it would move it beam to the next station and so on.

Microwaves, on the other hand have a much longer wavelength and in the 3 – 6 Ghz band, pass unaffected thru clouds and rain so bad weather is not a problem. But because the wavelength of microwaves is much longer so the antenna’s and receivers would be much larger.

The receiver or “rectenna” on the ground could be upto 10km in diameter because the beam would be much more spread out but as the solar power station would be in geosynchronous orbit 36,000 km out it would be over one spot all the time and could supply a continuous beam of energy day or night.

These microwave solar power stations would be large structures with mirrors up several kilometres in diameter but the power that could be transmitted back could be up to several gigawatts, as much as an average nuclear power station.

To make a 1GW solar power station would require 10 million 100W transmitters which would act as one huge phased array, that’s an antenna that can be steered electronically without moving and could be synchronised with the others so that the whole signal is in phase, which will be an another technical challenge in itself.

To make sure that the beam doesn’t drift off course the receiving station would send a pilot signal up to the solar power station which it would then follow, it could shut the beam down if it lost pilot signal. The pilot signal would also allow each of the sub transmitters to adjust the phases of the signal so that they would all be in phase and wouldn’t lose energy by cancelling each other out.

Even though the total power may be high it would be spread over a large area so the intensity of the energy would be somewhere around 1000W of power per square meter in the centre of the beam, the same energy level as the midday sun at the equator. This means that you wouldn’t be cooked if you crossed the beam and birds wouldn’t be falling from the skies looking like roast turkeys. The receivers would also be restricted access much like any other industrial process. Workers could work in the beam wearing EMF shielded clothing that creates a wearable faraday cage.

Currently, several institutions including Caltech and the Lawrence Livermore National Laboratory in the US and JAXA in Japan are working on practical systems.

To overcome the cost of transporting components into space the Livermore labs have been working on self-assembling solar collectors and compact high power LASERS, these would effectively unfold themselves from a small package that could be carried on a normal space launch. This would suit the LASER systems but the large microwave power station would still require a lot of infrastructure to be lifted into geosynchronous orbit.

Caltech has been working the creation of highly efficient combined solar cells and microwave transmitters. These small generation and transmission blocks would be bolted together to create much larger phased arrays.

But the country to gain the most from this technology is Japan which lacks both natural resources and usable land area and after the Fukushima disaster is looking at a renewable alternative to nuclear power.

JAXA the Japanese space agency is looking to deploy a 1 GW solar power station by the 2030s. But there is still a lot of work required before they can get there. Japanese engineers have already been conducting tests to wirelessly transmit power over larger distances with greater power on the ground.

The first solar power station tests with a 100Kw station are due to start in the 2020s. If that goes well then a 2MW and then a 200MW version will follow before the construction of the 1GW version which will most probably have to be an international consortium due to the size of the project.

So what do you think of solar power stations, will they be the future of our electrical supply, let me know in the comments and don’t forget to checkout some of our other videos if you get the chance, so don’t forget to subscribe, thumbs up and share.