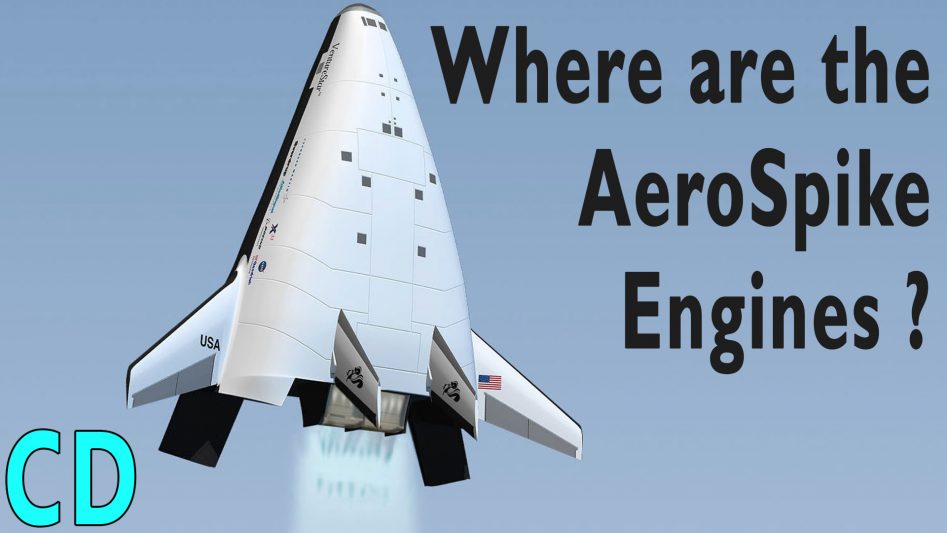 Ever since the earliest rockets, we’ve seen them working with a bell-shaped nozzle from the First German V2 rockets right up to the SpaceX falcon heavy but their ubiquity doesn’t mean that they are the best way to do things, in fact, they have a major drawback which is one of the reasons why we use multistage rockets.

However, since the early 70’s there has been an alternative rocket engine which has much greater efficiency and was to be power the next generation of single stage to Orbit spacecraft to replace the space shuttle but if it’s so good why hasn’t it even been flown yet?

The engine in question is the aerospike, a design that goes back to the 1950’s when it was first developed by Rocketdyne. Now whilst it might sound like an exotic new type of propulsion, the aerospike is not a whole new engine, it’s actually just a different way to contain and control the thrust that any rocket is that liquid or solid fuel produces and replaces the bell type combustion chamber.
Now, if we have been using the bell type rocket nozzle combustion chamber since the very first rockets right up to now then what’s wrong with them.
For a rocket to work correctly and produce enough thrust to lift it into orbit then you have to control the burning rocket fuel. If there was no rocket nozzle then the burning rocket fuel would expand uncontrollably in all directions and very little would be converted into forwarding thrust.

This sounds complicated but it’s quite simple. Everything including you, me, the ground and rocket engines has atmospheric pressure, pressing on us in all directions due to the weight of atmosphere as the air is pulled down by the earth’s gravity.

If you were to image a column of air measuring 1 square inch or 2.54cm from sea level to the top of the atmosphere, that air would have a mass of 6.67kg or 14.7lbs. We don’t feel that because we evolved to live at that pressure but if you were to go up to 12km that pressure would be just 1/10th of sea level and at 50km its just 1/100th of sea level, simply because the column of air is now much shorter and thus weighs much less.

This is fine if our rocket is travelling sideways through the atmosphere, like an air to air missile, then the air pressure doesn’t change much. A rocket going in to orbit however,` starts at sea level with a lot of air pressure and ends up in a vacuum with no air pressure.

Because a bell nozzle has a fixed size and shape, it is the maximum efficiency and thrust will only be achieved at one altitude. Design it to have maximum thrust at sea level at take off and the exhaust gasses will over expand and lose thrust at high altitudes because of the lack of air pressure.

Design it to have maximum thrust at higher altitude and at take off, the air pressure constricts the gas flow inwards which leads to it separating from the nozzle wall and becoming unstable, usually blowing the rocket apart.

In an ideal rocket nozzle, it would change its shape as the altitude and air pressure changes.

This is what an aerospike does, and it uses the pressure of the air surrounding it to have the same effect as the bell of a traditional rocket engine.

The two main types of aerospikes which have been developed are the annular or round ones and the linear or straight ones.

The round ones are where they get their name from. If you imagine an inverted bell shape, it becomes around spike. This spike becomes one side of a “Virtual” bell, whilst the air pressure surrounding it compresses the exhaust against the inner spike although many used a truncated spike which was much shorter than the equivalent bell design.

As the rocket goes from take off at high air pressure to the low pressure at high altitudes, the shape of the exhaust flow changes due to the changing air pressure to keep it at its optimum thrust. This is what is called an altitude compensating rocket nozzle.

Although its not quite as efficient as a bell at any given altitude, it outperforms them at all others. The Space Shuttle main engines which were used from take-off to space were much less efficient at sea level than they were in space and that’s part of the reason why it needs the extra boosters at take off.

With a rocket engine like the aerospike, you can use just one engine that will work efficiently from take off to space and avoid the need for multiple stages with different rocket engines optimised for different altitudes, effectively becoming an SSTO or Single Stage To Orbit.

So, if these are so good why aren’t the used. To date, no major rocket launch has used aerospike despite much research and development being done during the 1960’s and 70’s and then in the 1990’s.

As a follow-on to the successful J-2 engine that was used on the Saturn 3rd stage, Rocketdyne set about developing and building both the toroidal and linear aerospikes using the turbopumps and engine infrastructure of the J-2.

One of the biggest problems with aerospike engines is the cooling of the spike. In the toroidal or round design, the spike is long and heavy which makes its being difficult to cool the tip of the spike to stop it from melting.

This was mostly been overcome with the development of a new copper alloy called NARloy-Z in the 1970’s, which allowed longer use at high temperatures. The design was also changed with a truncated spike and some of the exhaust gases passed through the centre to achieve a similar result to the long spike but with less mass.

However, the linear version was more flexible design. In this, the round spike is straightened out into a “Vee” shape with the combustion chambers on either side. The beauty of this design is that they can be made modular so they can have more combustion chambers added to make a longer more powerful engine.

Back in the 70’s, they used combustion nozzles made in small banks which were stacked side by side on both sides of the “V” centre. Although aerospikes were proposed for the Space shuttle, as the Apollo program was wound up early in the 1970s, development work on the aerospikes also stopped and the space shuttle went on to use a conventional Bell engine nozzle.

Things stayed pretty much like that for the next 20 years until NASA was looking to develop the next generation space shuttle using an all new Single Stage To Orbit design. The design brief was to be able to come up with a new launch vehicle, that would be fully reusable and would greatly reduce to cost of getting in to space from $10,000 per pound to $1000 per pound.
Lockheed Martin won the contract to build the revolutionary design, designated the X-33 and one of key features was the use of the linear aerospike engines.

Development work continued on the XRS-2200 linear aerospike engine and by now the use of electromechanical nozzles meant that the fuel system could be controlled on a nozzle by nozzle basis. This allowed for much greater throttling control and also allowed thrust vectoring by turning off sections of the engine which removed the need to have heavy complex engine gimbals.

Work progressed well up until 2001 when due to issues with the X-33’s composite fuel tank and cost overruns, the project was cancelled, again taking the aerospike engines with it.

Progress has been made with NASA testing small-scale solid rockets with a toroidal full-length aerospike in 2004 but since then there has been no large aerospike engine development.

So why don’t the new companies like SpaceX and blue origin use aerospike engines with all the efficiencies they bring? wouldn’t they be a perfect match for the low-cost route to space?

As far as we know SpaceX has looked at using Aerospikes but given the fact that no large scale aerospike has ever been flight tested, it would be a very big risk when you looking to set up a commercial orbital space company.
One of the driving principles of the race for space was “to do the job good enough and no more”, basically meaning that once you have developed your spacecraft or rocket engine to do what it was designed to do, then that’s it, you stop there.
The technology Spacex and others are using is well known and tested, the way they use it might be different, like relighting the main engines to descend back to earth but the engines themselves are a known quantity.
Commercial companies have to make a profit in the end and taking on a major task like developing an untested new engine design is something that would quickly sap those profits away.

The problem boils down to money and time. Although the X-33 project almost got them to flight testing, its still a new technology that needs more development. There are still issues with a drop in thrust around the Mach 1.5 to Mach 3 speed range and they cost more to make than a traditional rocket engine.

It would mean completely redesigning the rockets away from using the tried and trusted but yet limited traditional bell nozzles. All that takes time, time which could be used launching with traditional engines and getting money into the company.

Although there would be a saving in fuel of upto 40%, the fuel is actually cheapest part of the rocket launch. Elon Musk said himself that the Falcon 9 costs $60 Million to build but only $200,000 to fuel. The bringing back of the boosters and central core with the engines brings far greater savings than could achieved with the changing to Aerospikes.

It seems as though until the price of launches has been driven down to as low as conventional bell nozzle engines will allow, that aerospikes will remain on the drawing board.

The Single Stage To Orbit vehicles which perfectly complement the aerospikes capabilities seem a long way off since the cancellation of the X-33 and the renewed interest in returning to the moon and Mars using variations of conventional engines that date back to the 1960s.

There are smaller companies like ARCA space which are developing small-scale aerospike engines for Single Stage To Orbit satellite launches but unless there is a radical change in the market only time will tell if aerospikes will ever get used for future space vehicles.