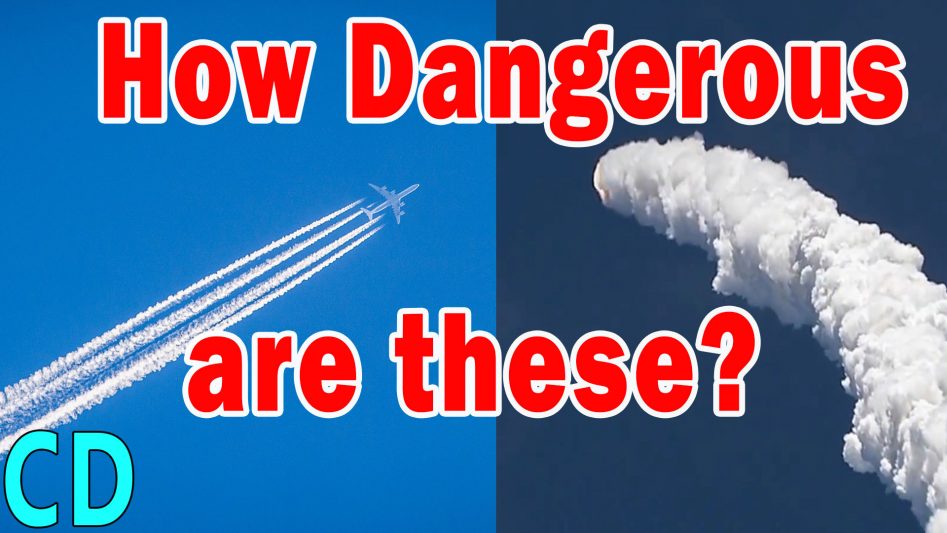 The sight of contrails above us in the skies is a common one, especially in the developed world since the advent of the jet engine and at around same time we have had a much less prevalent but equally potent kind of exhaust from rocket engines but just how dangerous is jet and rocket exhaust for you and me and the environment.

We’ve become accustomed increasing controls on car and vehicles to make our air cleaner and safer from removing lead in petrol in the 80’s to the fitting of diesel particulate filters and NOX or nitrogen oxides absorbers the last 10-15 years or so. But when you look up at the contrails left by planes or at rocket launches, it’s interesting to know that there are no such regulations on the aerospace industry.

You’ve only got to a see B-52 take off to get an idea of the pollution that can be produced, although that is an exceptional case these days and new jet engines are much more efficient but the fuel used has barely changed since the 1950’s and still has a high sulphur content. Avgas, the aviation version of petrol used by smaller piston engine aircraft still has lead in it long after it was removed in cars and as for solid rocket boosters, that’s a whole other level which we’ll look at shortly.

Nearly all jet engines in use to today use a form of kerosene fuel called Jet-A1 for commercial aircraft or its military equivalent JP-8. Jet-B or the military version JP-4 is used in extremely low temperatures of northern Canada, Alaska and sometimes Russia for its low freezing point.

Although jet fuel is used for jets, it’s actually very similar to diesel.

The main differences between jet fuel and the diesel you put in to your car or truck is that Jet fuel is a more highly refined cleaner “dry” version of diesel without the lubricants that are added to diesel to keep the fuel pump and injectors from prematurely wearing out. Jet fuel also has other additives to allow it to work at lower temperatures and in general it has a lower viscosity.

The reason why sulphur is not removed from jet fuel is that it’s not high enough to cause significant engine damage and more importantly the is no regulatory requirement to do so. Its cheaper to leave it in than take it out. Removing the sulphur from jet fuel would add about 2% to the price and its reckoned cost the global aviation industry an extra $1B and $4B per year.

Modern Diesel engines in cars and trucks have catalytic diesel particulate filters and nitrogen oxide absorbers, these remove 85% or more of the tiny soot particulates and NOX which can get stuck deep in the lungs and even absorbed into the blood to affect the heart and its now believed it could even alter DNA. It’s difficult to give precise figures but its believed to responsible for the deaths of 10’s of thousands of people each year worldwide.

This is where much of the contrails or condensation trails you see come from. The main by products of burning jet fuel is carbon dioxide and water vapor. At the high altitudes where most planes fly, around 36,000 ft the outside temperature is about -56C .

It takes a little while for the hot exhaust to cool which is why you see a gap between the contrail and the plane. As the water vapour cools it turn to ice if its cold enough and this forms a contrail. This is usually happens at above 26,000ft or 8000 meters but can occur at lower altitudes if the air is moist and cold.

But at the very low temperatures where jet planes cruise, the water in the exhaust can exist as super cooled water vapour and it needs a trigger to condense and then freeze. The tiny soot particulates in the exhaust act as the trigger for the water vapour to condense around, which then freezes. These contrails are effectively artificial cirrus clouds and sometimes called cirrus aviaticus and can last from a few seconds to hours.

Contrails vary greatly even from planes travelling at the same altitude, different engines will have exhaust temperatures and create different trails, newer engines tend to produce more water vapour and hence more contrails than older ones and wet air will form more contrails than dry air.

Wet and dry air can exist very close to each, other making trails appear and disappear apparently randomly and you can’t see from the ground which is which until clouds have formed, that’s a form wet air you can see. Engines running on greater thrust when planes are climbing output more exhaust than those that are cruising and finally its very difficult to accurately judge the altitude of planes from the ground.

All of this leads some people into believing that planes are spraying chemicals into the atmosphere because the trials look different or stop and start in an apparently clear sky and this is where the chemtrail conspiracy theories come from.

Now while some of the soot particulates is wrapped up in water and ice, much of it, the unseen part which escaped being captured is blown on the high altitude winds for thousands of kilometers. So away from the airports where the low altitude flights occur, the areas which have the highest air traffic like the US and Europe actually have quite low levels of aviation-based pollution.

This is because most of it ends up being blown westwards to places like India and Asia where it eventually falls back to earth to be breathed in by the population there.

But of course its not just humans which are affected, the environment is also affected but its not quite a clear cut as it would seem. Jets like any other fossil fuelled engines produce a huge a mount of CO2 which contributes to climate change and ocean acidification but the contrails themselves are ice and that reflects sunlight in the daytime but act as at insulator to keep the heat in at night. Soot particles absorb heat to warm up the upper atmosphere but sulphate particles reflect light and heat.

The NOX or nitrogen oxide produced and released at the high altitudes is very effective at creating Ozone which adds to the warming effect but it also reduces levels of methane, a very potent green house gas which has about 20 times the warming effect of CO2. The sulphur in the exhaust can also combine with the water to help deplete Ozone but can also form acid rain to damage plant life, so as you can see it’s a very complicated picture.

So what about rockets, with the recent talk by spaceflight companies of reaching for airline like launch frequency it’s surprising to find out that there is still very little is actually known about the effect of rocket pollutants being deposited into the upper atmosphere where it can have the greatest impact.

The fuels used during the take off fall in to two types, liquid fuels and solid rocket fuel.

The main liquid fuels are RP1 or kerosene and liquid hydrogen. These are used with liquid oxygen instead of air like a jet engine and so can work in space where there is no oxygen.
Another branch of liquid fuels are hypergolics. Hypergolic fuel are liquids which spontaneously combust on contact with each other, one half is the fuel and the other is the oxidiser but unlike many of the other liquid fuels, Hypergolics are highly corrosive and toxic before being burned.

The solid rocket fuel which was used in the solid rocket boosters of the space shuttle and in the Titan and the upcoming SLS rocket consists of ammonium perchlorate and aluminium powder and a binder to hold it together.

Many of the large rocket launches of the past like the Apollo and many of the first stage launches of today use RP-1 which is a highly refined version of kerosene or jet fuel. RP-1 is designed leave less residue behind and has an ultra-low sulphur content, as at high temperatures sulphur attacks metals and residues can carbonise and create hotspots which could damage the engines.

At launch, the main exhaust components of RP-1 is carbon monoxide, carbon dioxide and water vapour. The amount of soot produced is less compared to a jet engine because  of the use of liquid oxygen, this means the combustion is much more complete and there is less unburnt fuel even though rocket engines normally run fuel rich to help with cooling.

Rockets that burn liquid hydrogen and oxygen are the cleanest of all, other than some NOX which is produced when the hot exhaust reacts with the air, thby-productct is water vapour. The engineers that refurbished the Space Shuttle Main Engines said that it looked like they had been stream cleaned, which in a way they had.

SpaceX is currently developing the Raptor engine which will burn liquid Methane and Liquid Oxygen which would eliminate the soot issue which affects RP-1 fuelled engines.

The worse polluters are the solid rocket boosters, these produce mostly water, carbon dioxide and metal oxide in the form of aluminium oxide particles which were first thought to have a cooling effect on the upper atmosphere by reflecting sunlight but its now thought that they have warming effect because they absorb outgoing heat radiation from the earth.

SRB’s also create hydrogen chloride which can dissolve in water to create corrosive hydrochloric acid though little is known of what happens to it once it enters the environment, though chlorine does have an effect on the ozone layer.

The USAF performed studies on large SRB’s and their effect on the atmosphere and concluded that 9 shuttles and 6 titan launches per year would account for just less than 1% of the annual ozone depletion.

The biggest saving grace is the rocket launches are a tiny percentage of the flights compared to the aviation industry. The Saturn V, the biggest rocket ever built carried enough kerosene to just fill over four Boeing 747’s.

According to the FAA, they handled around 42,000 flights per day in 2016, the number rocket flights can be counted on two hands per month, so even with a big increase in launches, it would still be a very small amount compared to commercial flights.

The biggest issue is the lack of regulation of the aviation industry to clean up the exhaust products like the automotive industry has to and this could be done by providing cleaner fuel in the first place, this alone could reduce the pollution with minimal modifications required to current engine technology.

Ultimately though, the best way forward will be with electrically powered planes with the electricity coming from renewable sources or maybe hydrogen fuel cells using sustainably produced hydrogen.

A lot of research work will be required in to designing not only the engines but also batteries or some other way of storing electrical power in a lightweight form over the coming decades and this needs scientists and engineers with the skills to work not only to work on the aero engineering but also to study the effects of existing pollution on the environment whilst we are getting here.
Our sponsor for this video, Brilliant.org, is dedicated to helping you gain those skills — turning you into a living, breathing, and most importantly, calculating scientist.

Head over there and prove for yourself what the effects of greenhouse gases have on the environment. Having a strong math and science skillset is crucial because it opens up so many ways to explore the both the manmade and natural world and beyond. To support Curious Droid and learn more about Brilliant, go to Brilliant.org/CuriousDroid and sign up for free.

So, if you’re ready to help create the next generation of air travel, the first 200 people will get 20% discount off the annual Premium subscription.