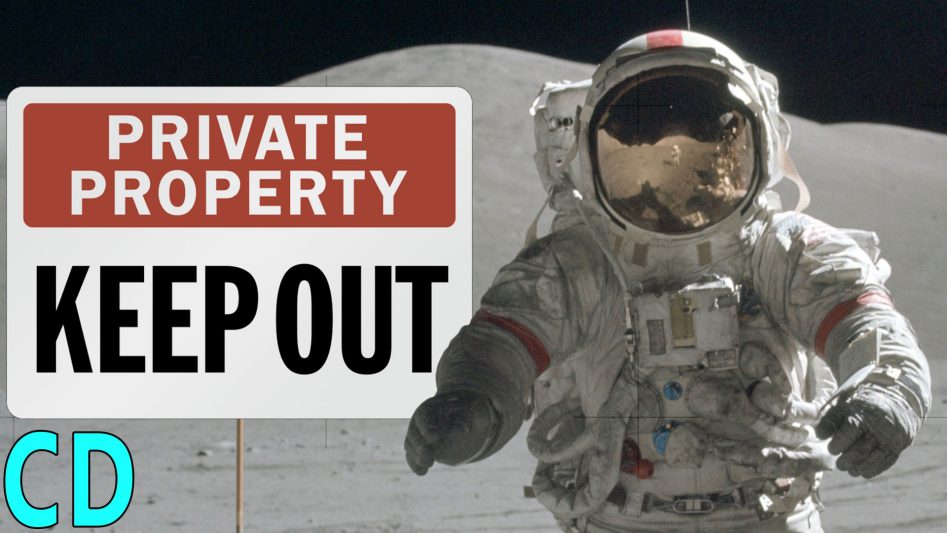 With the 50th anniversary of the first manned moon landing coming up and the prospect of having new lunar explorers both state-sponsored and private companies, how do you protect what are arguably some of the most important scientific and culturally historic sites in human history?

You would think that the very position of the Apollo landing sites, the Russian Lunokhods and the Chinese Jade rabbit would be enough to keep them safe but there is a similar parallel with the wreak of the Titanic. That sunk in 1912, in 3800m or roughly 12,500 ft of water, its exact position unknown in what was thought to be in an unattainable place, until its discovery in 1985 and within just a few years treasure hunters were recovering artefacts in what many compared to grave robbing or plundering the pyramids.

Now, it’s obviously far more difficult to get to the moon than to the Titanic but these days its not beyond the rich and powerful or other similarly advanced countries. You can imagine what a piece of Apollo 11 would be worth to a rich collector or finding Buzz Aldrin’s boots on eBay, the ones which he had to leave behind to help compensate for the extra 22kg of moon rocks and soil they brought back, not the ones he might use to kick a moon hoax believer with.

But it’s not just the salvage of parts which might be an issue, Apollo 12 did that when they achieved a precise landing next to the Surveyor 3 probe and removed its TV camera and other parts and brought them back to earth for examination.

As Apollo 12 found out, just being in the vicinity of the landing site could damage not only the physical objects left behind but also things like those first footprints and trails left by Armstrong and Aldrin as they traversed the lunar surface. Without weather, wind, rain or volcanic activity, those footprints could stay there for undisturbed for hundreds of thousands or millions of years, unless they hit by a meteor of filled in with dust from a nearby craft landing.

Landing on the lunar surface can launch the highly abrasive lunar dust to speeds of several kilometres per second and with no air resistance to slow it down or much gravity to pull it back to the surface it can easily travel tens or hundreds of kilometres and effective sandblast anything it hits.

Any robotic rovers, astronauts or even future space tourists in a historic landing area could inadvertently contaminate or damage the original trails with extra dust or biological elements whilst they move around and even hovering over the sites could also damage them.

Whilst this might all seem a bit far off, consider the Google X prize which ran from 2007 and ended unresolved in March 2018. It offered $20M for the first private team to land a spacecraft on the moon, travel 500m and send back hi res pictures or video. That had ten registered entrants from different countries around the world. They even offered a bonus prize if they could get pictures of an Apollo site, though that was bit of a contentious issue with NASA.

One of the things which scientists are very interested in is seeing how objects which were left behind have fared. Even now we have very little data on how the harsh solar radiation, wide swings of temperature and even micro meteors have affected the manmade objects over the decades still they were left.

So with the possibility of a new wave of lunar explorers, NASA and the US government have issued guidelines for both US and foreign space agencies and private companies.

Now the landers, rovers and other equipment left behind are still the property of the governments which placed them there and woe betide any American company that might want to get a piece of any of the US lunar missions, be that Apollo or previous ones like ranger and surveyor but its not like there are any guards there to stop anyone from trying, be that in person or by remote control.

But the land on which they are currently placed is a different matter. Under the 1967 Outer Space Treaty (OST), the moon, the other planets, asteroids, comets etc are common land and are not owned by anyone. This was agreed upon to stop the land grabs so often seen here on earth and the ensuing battles, be that legal or physical that followed.

The problem now is that even if the US attempts to amend or create new treaties that cover the protection of the Apollo sites for the scientific good, others will see it as the beginning of a way in which the US could justify claiming land for its self and if the US could do it, then the Russians, Chinese and even private companies would could also try the same.

Previous agreements have taken upto 15 years to set up and if it takes that long again, the chances are that new lunar visitors will already have been there before they comintoto place.

Also, there is still no real agreement in place for when private companies or foreign space agencies start to prospect and mine the moon other than just leave the historic landing sites well alone but if anything is to go by the lawyers will be making a much of a killing as the miners in the future.

So how do you think we should protect our space heritage on the moon or in space, let me know in the comments and why not check out some of our other videos. I’d also like to thank you for watching and all our patreons for their continuing support and don’t forget to please to subscribe, like and share.