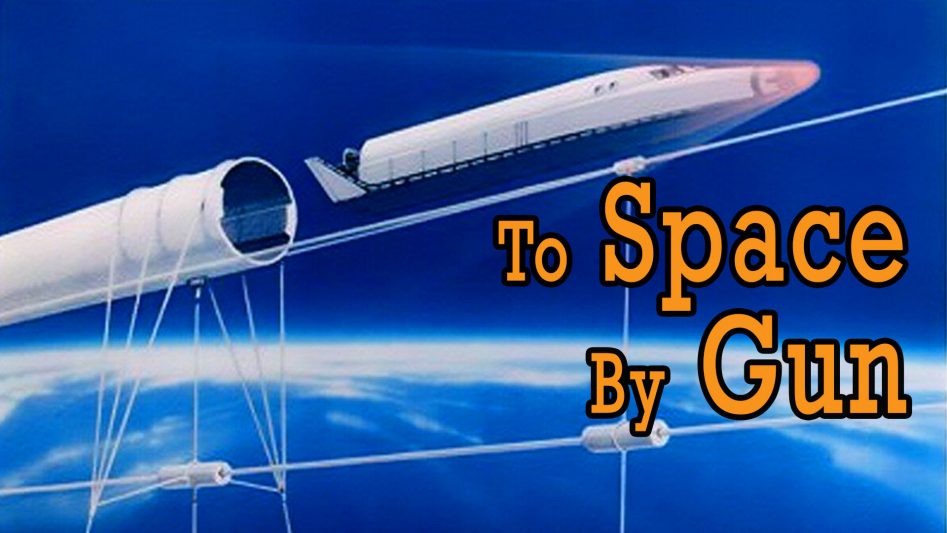 When we talk about blasting something in to space, most of the time you would think that they would be using a rocket but what about using a giant gun.. sounds crazy but back in the 60’s a joint project between the US and Canada used just such a giant gun to fire objects in to space to test their re-entry characteristics, so could you actually use a gun to put a satellite or even spacecraft in to orbit.

Now the idea of using a giant gun to fire objects in to orbit might seem sound in principle, you only need to send the payload itself without having to carry the massive amount of fuel like a rocket and in theory launches could be done in much less time and at much lower costs but there are several problems and the first of which was shown over 300 years ago by Isaac Newton.

Newtons Canon was a thought experiment in which a cannon is fired horizontally from a very high mountain, so high in fact that it would be above the atmosphere. This was to demonstrate how gravity is universal and if you got the speed of the cannonball just right it, it would end up in orbit around the earth.

Newton himself showed that just like any other parabolic, hyperbolic or elliptical orbit if you accelerate an object during the orbit you will always return to the point where the acceleration took place.

As our gun is on the surface of the earth, then the starting point or firing of the gun is where the acceleration will take place and its where our projectile assuming it is a dumb unguided shell, will return to within one orbit, basically, it will crash back to earth where it was fired from.

The only way to avoid this it to either fire it with such a high velocity that the projectile can break free of earth’s gravity completely and end up in deep space or once it has reached a suitable altitude it can correct its course itself and enter a stable orbit like a rocket does.

Setup in 1961, Project HARP or the High Altitude Research Project was a US-Canadian co-operation headed up by Gerald Bull that I mentioned earlier. This was to use a large gun to fire projectiles to the edge of space to study their re-entry ballistics in the race to develop intercontinental ballistic missiles and was cheaper and easier than using hypersonic wind tunnels or the rather unreliable rockets of the time.

The HARP guns were made from 16” ex-US navy guns that were modified by connecting two barrels together to create a total length of 41m. One was located in Barbados and the other in Yuma, Arizona.

The key feature with these tests was the gun was oversized and the projectile, a Martlet rocket which was held in a sabot was undersized, this allowed the test to have the high-speed acceleration. To withstand the huge amount of G-forces during the firing of the gun, which at its peak reached 25,000g when they pumped out the air in the barrel and sealed it, the sensitive electronics were potted in a sand and resin mix which proved to be highly effective in protecting them from the forces of the launch.

During tests in 1966, the Yuma based gun fired a Martlet 2 weighing around 180kg, to a height of 180km, around 590,000 feet, easily into what is considered as space which officially starts at 100km and is a record that still stands today. Although this might seem like a lot, the velocity was still only about 2.1km per second, that’s still only a fraction of the 7.8km per second required reach low earth orbit.

Conventional guns relying on an explosive charge can only reach about 2km per second as our projectile can’t accelerate faster than the pressure wave from the exploding charge that pushing it along the barrel.

In the 1980’s the Lawrence Livermore Laboratory as part of the Ronald Reagan star wars initiative to shoot down incoming missiles conducted tests on what they called the SHARP or super HARP gun. This used a two-stage propulsion technique with an L shaped barrel. Firstly in a chamber at right angles to the main barrel, a methane/air mix is ignited, this the pushes a pump piston to compress hydrogen which then propelled the projectile along the main barrel. As hydrogen is the lightest gas it can achieve the highest speeds and in tests, small projectiles reached 10km per second, enough to achieve orbit.

Now unlike newtons cannon which was above the atmosphere, any practical space gun like the Project HARP ones would have to be on the ground, therefore the projectile would have to be accelerated through the densest part of the atmosphere at hypersonic speeds to have enough velocity to reach an altitude suitable for orbital insertion and this also brings about the problem of heat.

The faster an object goes through the air, the more the air is compressed on its leading edges and the more the air heats up, to the point where it can reach well over 1000 of degrees C and cause damage to the projectile.

As the altitude increases the air becomes less dense and the heat builds up is less till you get the space where it stops altogether. Whereas a rocket starts slowly in the dense atmosphere and builds up speed through thinning atmosphere to space, a gun accelerates the object to its full speed during the length of the barrel and right into the dense atmosphere where the air compression and heat will be at it’s greatest.

Before the Soviets put the Sputnik satellite into orbit was a rumour that the US had accidentally launched an object into space during an atomic bomb test.

During the Pascal-b Nuclear test of 1957, a 100mm thick, 900kg armoured steel end cap was used to seal the 152-meter deep test shaft and it was welded into place to see if it could contain the radioactive material. When the bomb was detonated at the bottom of the shaft the end cap was blasted upwards at what was thought to be around 66km per second, about 150,000 miles per hour.

This was expected and as part of the test, high-speed cameras were trained on the cap but it was only caught on one frame of film so exact figures could not be calculated but was said to be travelling “like a bat”. Some believe that it became the first man-made object to be blasted in to orbit but Dr. Robert Brownlee, who worked on the test believed it was vaporised by the intense compression heating of travelling through the atmosphere at such a great velocity but either way the cap was never seen again.

Now an oversized manhole cover is not the ideal shape for a projectile and it could be expected to burn up but with an aerodynamic shape and special heat shielding, the heat issue could be overcome.

So we can fix the heating problem, but due to the speed, there is another related issue in that the gun’s projectile has an acceleration that’s somewhere around 20,000g. That would turn any delicate satellite into scrap metal and humans into jam but that didn’t stop people from using the idea in fiction or reality.

Jules Verne used the idea of a space gun in his SciFi novel of 1865 “From the earth to the Moon” to fire a manned projectile to the moon.

Although many saw it as pure fiction some of the calculations which Verne did, considering there was no empirical data to go on at the time, turned out to be surprisingly accurate. But the length of the barrel would be the major problem and would have to be incredibly long if humans were to be passengers inside.

In order to launch humans into orbit and on the moon like in Verne’s story the maximum acceleration you would want to subject your passengers to would be about 7g, though in the space shuttle it was about 3g and Soyuz is about 4.5g, so to be on the safe side you would be looking less than 5g for longer periods of time.

The length of the barrel, if you allowed the acceleration to increase safely from zero to 7.8km per second would need to be greater that 50km long depending on the g level you were going to inflict on your passengers.

This pretty much rules out any conventional gun powered by an explosive charge, but an electromagnetic railgun could start at a much lower speed and could have a top speed high enough to reach orbital speeds.

This idea has been proposed to launch payloads into orbit which would not be affected by the high G-forces such as food, water and fuel but even limiting the acceleration to 1000g it would still require a track over a kilometre long.

With current technologies this would be very challenging but not impossible, the biggest issues being the arcing of the electrically conducting track and the sabot and the atmospheric heating of the projectile at the hypersonic speeds.

Coilguns which use high power electromagnets to propel the projectile but with no physical contact would eliminate the wear on the tracks but aren’t currently capable of reaching the 7km per second acceleration required. The best launch sites would near the equator and 2-3km up the side of a mountain in areas where noise would not be an issue.

This would still rule out transporting delicate satellites and humans but could dramatically reduce the cost of getting raw materials in to orbit.

So it looks like rockets will be with us for the foreseeable future if only to get delicate payloads into orbit unless or course we can build a space elevator but that’s another story altogether and in which case don’t forget to check out some of our other videos and please, subscribe, rate and share.