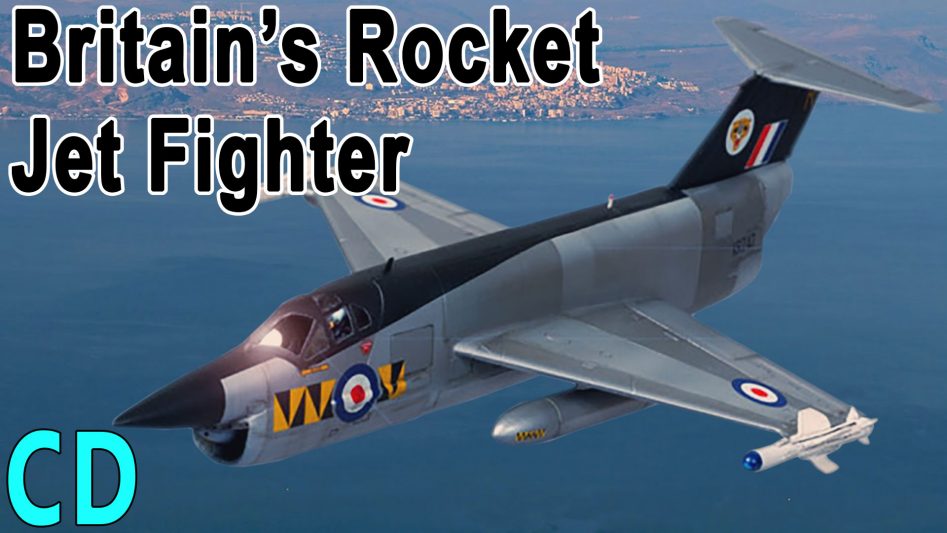 During the 1950s NATO faced a new threat from Soviet Union, western intelligence believed they were building a fleet of supersonic nuclear bombers that could fly higher and faster than anything NATO had including it’s interceptors.

The UK’s response was to create a groundbreaking fighter that not only would outperform the Soviet threat but would also be an ideal interceptor to equip the front line NATO countries in Europe. But in a twist of fate worthy of any cold war espionage novel it would be brought down by not only the UK government, again but also some really rather unfriendly competition from a rival aviation company.

As the cold war deepened after World War 2 the Soviets made great strides in technology, they surprised the world and in particular those in the west when they exploded their first atomic bomb in 1949 and these surprises kept on coming with the launch of Sputnik on top of the world’s first ICBM in 1957 and then the Myasishchev M-50 supersonic strategic bomber of 1959.

Having seen the effectiveness of the mass bombing raids on Germany and Japan by the allies in world war 2 there was thought to be the need for force of high performance interceptors as it was believed that the sSovietswould use their equivalent to the Boeing B-29 super fortress , the Tupolev Tu-95 to use the same bombing techniques but with nuclear weapons against the west.

With the front line NATO countries like West Germany being so close to the Soviet aircraft based in East Germany, no more that a few minutes away, any fighters would need to go from runway to the 50-60,000ft in under 3 minutes, something which none of the NATO fighters could do at the time.

As WW2 came to an end, the allies scoured Germany for secret weapons and the scientists and engineers that built them. The Americans rounded up many of the rocket scientists and took them back to the states to work on what would become the American ICBM’s and ultimately the US space program.

Several of the top German aircraft designers ended up in England including Alexander Lippisch. Lippisch had designed the worlds first rocket plane, the Messerschmitt Me 163 Komet which was the fastest plane of the war capable of over 1100km/h in level flight just short of Mach 1 and was designed to do hit and run attacks on the allied bombers.

The problem with the Jet engines of the early 1950s was that they couldn’t accelerate fast enough and were running out of power at the high altitudes required where the Soviet bombers would be. The British looked at a purely rocket powered plane like the Komet, this would have the acceleration but which ever way they did it, they couldn’t fit enough fuel capacity in the airframe to achieve the range required. A rocket engine also didn’t provide the power to run the electrics and hydraulics to control the plane when come back to land, making the first rocket planes effectively gliders when the fuel ran out.

The breakthrough came when they decided to use both types of engine in the same plane. A small jet engine for takeoff and landing which would also power the rest of the systems and a rocket motor for the high speed acceleration.

The job of building the protype was given to a company called Saunders Roe and the plane was called the SR-53. This was a small plane that would be as light as possible to give it the performance required. The SR-53 was being tested at the same time the first rumours of the Soviet supersonic bombers came out and although the SR-53’s performance was very good it was still lacking in key areas, one of these was in finding its target.

The supersonic Soviet bombers like the Myasishchev M-50 would be cruising at Mach 1.3 at 60,000ft, normally ground radar would relay this information along with the heading to the pilot of the interceptor who would then head off to find the target. But because the Soviet bombers were so high and fast it was very difficult to find them without some form of airborne Interception or AI radar. The SR-53 was just too small to fit all of the required radar electronics and keep its performance, so a new plane was planed the SR-177.

This would be a larger version of the SR-53 with a bigger more powerful jet engine, AI radar and the same rocket motor. It would also be capable of mid-air refuelling allowing it to stay up for much longer.

This new mixed fuel aircraft with the onboard radar, would have incredible interception capabilities well beyond any other fighter of the time and something that was exactly what the West German Luftwaffe were looking for to counter the Soviet threat just across the border.

The SR-177 was poised to become the new NATO fighter which would be a huge contract for whoever won it.

However, at the same time ,the British government was basically broke after the war and the cost of maintaining military spending at war time levels was too much to bear.

In the now infamous white paper of 1957, the government put forward the idea of basically scrapping huge sections of the military infrastructure to concentrate on Intercontinental Ballistic Missiles. This meant that interceptor projects like the SR-177 would be deemed obsolete and not ordered for the RAF. The English Electric Lightning would be the last interceptor ordered to cover the time until surface to air missile technology had evolved enough to do the job.

But this didn’t cover the Royal Navy who saw the SR-177 as a good carrier aircraft and had a provisional order for 27 though only 9 would be supplied in the short term.

Because of the German interest in the SR-177, it made it a NATO project as well. The the UK government applied for special NATO funding from the US to complete it’s development but to the surprise of the British, the US refused the funding request but the reason for this would soon become clear.

During the Korean war, the Soviet MIG-15 was often in combat with American F-86 Sabre’s but many the US pilots felt that their Sabres were inferior to the lighter and less complex MIG.

Lockheads chief engineer Clarence “Kelly” Johnson, seized on this information and went back the US to come up with a simple yet high performance plane which would become the F-104 Star fighter.

Although initially welcomed by the USAF, problems with the F-104 soon became apparent, it had a short range, the small wings gave it a high stall speed and couldn’t carry much in the way of munitions and it also lacked an all weather radar system. In the end it was dropped by the USAF in favour of the Convair F-106, which ironically had been designed by Alexander Lippisch, designer of the Messerschmitt Me 163 Komet who was now living and working in the US.

Although Lockheed had lost its contract with the USAF, they saw an opportunity to sell it in the NATO air forces in Europe and the first place they would try was West Germany.

In order to meet the German requirements, Lockheed had to modify the plane substantially, including fitting wing mounted fuel tanks and a new heavier more complicated all weather radar. These plus other modifications made the F-104 which was already known as a tricky plane to fly even more difficult especially for less experienced pilots.

Even though the SR-177 seemed ideally suited for the Luftwaffe needs the contract for the new NATO interceptor went to the Lockheed F-104.

This was the last straw for the SR-177 and with the loss of the NATO contract the Royal Navy also pulled out and the project was cancelled completely in 1959.

The F-104 went on to be sold in to sold to many airforces around the world including, Germany, Japan, Canada, Italy, Belgium, Spain but its safety record became a great cause for concern for many of those countries.

Due to a change from use from a high altitude interceptor to a ground attack plane, the very modifications the Germans required such as the extra fuel tanks made the F-104 difficult to control and unduly stressed the airframe causing metal fatigue. The radar was also more of a distraction than a help when flying low in hilly terrain and was blamed for crashes due to overburdening the aircrew with information at crucial moments.

It would be almost 20 years before it became apparent as to why the SR-177 lost the contract to be the  NATO fighter.

After the Watergate scandal and a renewed interest in the US into corruption, it was discovered that Lockheed had paid out some $22 million in bribes from the 1950’s to the 1970’s to foreign government officials in order to secure orders in particular for the so called “Deal of the Century” sale of the F-104 in Europe and Japan and one wonders if this was the reason for the refusal of NATO cash for the SR-177, to clear the way of any competition.

The scandal nearly brought down Lockheed and the public and foreign outcry forced US President Jimmy Carter to bring in a law banning US citizens and companies from bribing foreign governments.

Although the SR-177 was gone there was still a couple of flying prototype SR-53’s and it was decided that they would be used like the X-15 in the US and launched from the back of a Valiant bomber to fly to the edge of space for research as part of the British space program.

However, after the crash of one of the prototypes and the cancelling of the UK’s space program the remaining SR-53 ended up like so many other of the unfinished British aerospace projects, in a museum.

And as for the Soviet Myasishchev M-50 supersonic strategic bomber, only one prototype was ever built but it helped set off the west on to a wild goose chase in believing the Soviets had a huge fleet of them while the Soviets actually switched to making ICBM’s, so maybe the British government was justified in doing the same in the 1957 white paper.

So what do think that the last Rocket fighter and also the underhand practice of Lockheed to get rid of the competition, let me know in the comments, so it just remains for me to say thanks for watching and please subscribe, thumbs up and share.