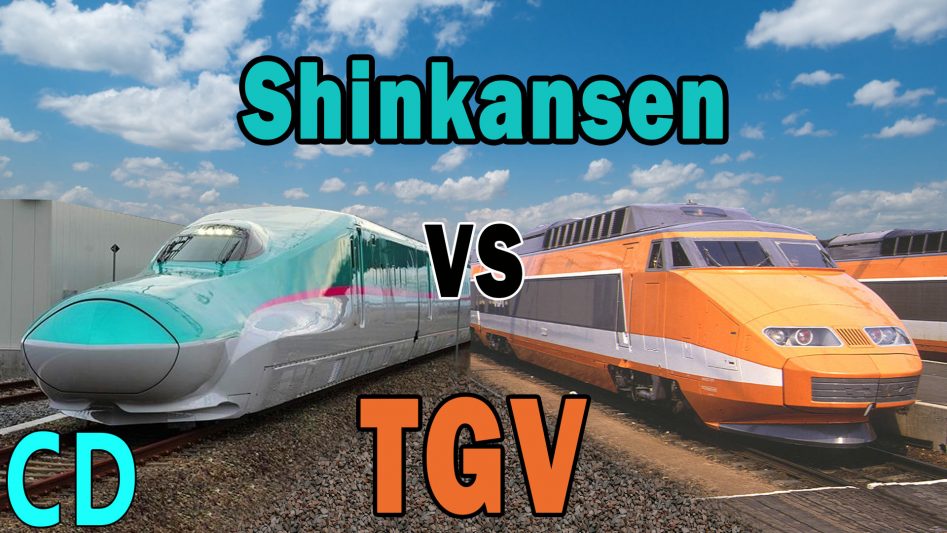 The Japanese shinkansen or bullet train and the TGV from France are the original high-speed rail trains and although they provide a similar service they are quite distinct in their own right and yet they have a common starting point but is possible to say if one better than the other?

High-speed rail is usually defined for new lines as having speeds in excess of 250 km/h and on existing lines of greater 200 km/h.

Whilst it is seen as a feature of modern railways it’s actually been around since the 1930s, even in the US  after the great depression which caused a huge loss of business for the American railroads, high-speed rail was seen as the way to get people back on to trains to make them profitable.

In the mid 1930’s, the Pioneer Zephyr streamliner was one of the first to incorporate a lightweight aerodynamic stainless steel body, Jacobs bogies between the railcars and used a 2 stroke diesel-electric power plant. It ran on the Chicago, Rock Island and Pacific Railroad and could reach up 185km/h but averaged 124km/h in service.

One of the first in Europe was the DRG Class SVT 877 Hamburg Flyer, a two-car streamlined diesel-electric that ran on the Berlin to Hamburg line from 1933 till the outbreak of war. It traveled the 286km route in 138 minutes at an average of 120km/h though it could reach 160km/h, a time that took a further 64 years be for it was matched by a modern Intercity Express in 1997.

In 1939 in Italy, the electric FS class ETR 200 averaged the 305km journey from Florence to Milan at 165km/h and set a new record of 203km/h. The year before in 1938 the British Mallard stream locomotive achieved the same speed as the fastest steam train, a record which still stands.

But the second world war effectively stopped all the high-speed rail developments until the 1950s when the French National Railway, SNCF began testing the new Alstom CC7100 electric locomotive. This achieved 243km/h pulling a full train on standard tracks in 1954 and then in 1955, a CC7107 reached 331km/h.

Meanwhile, in Japan, the post-war economy was booming and so was the need to transport people between the densely populated centres of Tokyo and Osaka also known as the Tokaido belt. The existing rail system was becoming overloaded so the idea of a new high-speed railway was brought back from the 1940s.

Japanese engineers from the Japan National Railway attended the Electrotechnology Congress in Lille, France during a 6-month visit to study the high-speed rail work being carried out in Europe. They left with many ideas that they would adapt and use to build the Shinkansen or Bullet train, the first truly integrated high-speed rail network in the world.

The “Bullet train” was the nickname given to a project discussed in the 1930s and then “Shinkansen” was the formal name used in the 1940’s as a high-speed rail system was envisaged running from Tokyo to as far Beijing in China, through a tunnel to Korea and on to as far as Singapore. Some of the original tunnels dug for that in Japan were later used for the new Shinkansen lines.

The initial construction of the fully electric service started in 1958 and by 1964 the 0 series with the classic bullet shaped noses started regular services, running at up to 210km/h and were a source of great national pride.

The aerodynamic bullet look was created by Tadanao Miki who was a plane designer in the war and had designed the single-seat rocket-powered Yokosuka MXY7 “Kamikaze” planes used by the Japanese in the latter part of World war 2.

By comparison at the same time, the UK, the country which had invented the railway was transitioning from steam to diesel and still regularly running steam trains up till 1968.

In order for the Shinkansen to run at full speed it has its own dedicated lines using the standard gauge compared to the existing narrow-gauge, this allowed greater stability at high speed and no slow commuter or freight traffic to be in the way on most of the routes.

The traditional tracks were also an issue, for high speed they need to be precisely aligned and the curves need to be shallow and banked. For this continuously welded rails are used and often it’s easier to build a whole new track than it is to try and upgrade an existing one.

This has contributed to it being the safest railway system in the world with no fatal accidents since the service started despite it carrying over 10 billion passengers or the equivalent to 1.4 times the entire world population in that time and having only two derailments whilst in service, one of those during an earthquake in 2004.

Because of the threat of earthquakes, the Shinkansen has a sophisticated detection system that picks up the much faster P or primary shock waves of an earthquake and immediately shuts the electrical supply and applies the brakes of any train in the affected area before the much more damaging but slower S or Secondary shock waves hit. This is believed to have saved many lives when the 8.9 magnitude earthquake and tsunami struck in 2011 when many of the Shinkansen in the area were travelling at well over 200km/h.

In order to get to the amount of power required the voltage of the over headlines was upped from the 1500 volt DC system to 25,000 volt AC.  This allowed the overhead cables to remain thinner and lighter as the current increases as the voltage is stepped down in the train. New self-adjusting pantographs allowed a reliable supply of electricity at high speeds with less wear and tear.

Instead of a power car or locomotive at each end, the Shinkansen has electric multiple units with each axle on every coach being powered, effectively giving it all-wheel drive. This gives it greater acceleration on the many stops of the journey with less weight per axle which reduces wear on the track. It also allows the Shinkansen to negotiate tighter curves with a radius of 2500m compared to the 4000m of the TVG.

This greater load spreading allows the trains to also carry more passengers per meter of train length than any other high-speed train meaning that they can move more people per train, each train having normally 12 railcars cars rising to 16 with later models.

As time went by the speed of the Shinkansen increased to 320km/h. This presented a problem when going through tunnels and the Japanese tunnels were also smaller in diameter than other rail networks around the world. This created a sonic boom as they existed the tunnels so the noses of the trains became longer to help spread the shockwave along the front of the train and reduce the effect.

After the success of the bullet trains in Japan, the Germans and French, in particular, concentrated on there own high-speed rail. The TVG, which was built by Alstom and means “train a Grande Vitesse” was originally designed to run with gas turbine engines from a Super Frelon helicopter driving alternators which generated the electrical power for the motors.

The prototype TVG 001 covered nearly a million km during testing and had a top speed of 318km/h, still a record for a non-electric train.

The TVG followed a more conventional 2 power car layout, one at each end with coaches in between and used Jacobs bogies as seen in the Hamburg Flyer and Pioneer Zephyr. This is where one wheelset or bogie is used between two railcars instead of one at the end of each railcar. This make the trainset lighter and more rigid. This was quite different from the Shinkansen all-wheel drive and 2 wheelsets per car and allowed the TVG to be more stable at high speed due to a more rigid layout but also meant that the minimum turn radius was 4000 meters. It also means that the cars cant be separated without visiting a specialist engineering depot, unlike the Shinkansen which can be split like a normal train.

However, when the oil crisis of 1973 hit, the cost of fuel for the turbines rose dramatically forcing the design team to switch to an all Electric design like the Shinkansen.  This actually suited the French and to a lesser extent the Japanese quite well as both had a high proportion of their electrical supply generated by nuclear power which insulated them from the oil price up until the Fukushima nuclear accident in Japan in 2011.

The first all-electric TVG prototype called Zébulon ran in 1974 and by 1981 a the first purpose-built high-speed rail line and TVG were available to the public between Paris and Lyon and went on to set a new speed record of 380km/h.

Due to the speed that both the TVG and shinkansen travel, it was deemed that the trackside signals would be approaching too fast for the drivers to react in time. So, both use automatic braking systems so that if one train slows and the drivers of the ones behind don’t react within a set distance, the brakes are automatically applied. This allows trains to run at closely scheduled intervals without the bunching up like road traffic does when one vehicle slows unexpectedly.

Where ever a high-speed rail line has been established, the air traffic between the same two points has decreased dramatically as it much quicker to get on and off to a train compared to a plane and the stations are in population centres of rather than being away from them, even though the plane is much quicker once flying.

But there is a limit, in Europe its 3 hours and in japan its 4 hours, if the journey by train is longer than this then the balance tips towards air travel and away from the train.

In the early 2000s, Astom started work on the next stage of the TVG to develope the AVG or (Automotrice à grande Vitesse). This adopted a similar principle to the Shinkansen of distributed power and doing away with the powered locomotive ends yet keeping the jacobs bogie layout. This and an all-aluminum body and new permanent magnet motors reduced the overall weight of the train considerably.

In 2007, a TVG Duplex, that’s a double-decker railcar version using the AVG power setup, set a new speed record of 574.8km/h, though in service the AVG, which sold to the Italian National railway would run at up to 350km/h.

The Chou shinkansen L0 series maglev has recently retaken the high-speed record with 603km/h set in 2015.

It’s difficult to say if one is better than another because they are a result of how they were designed for what are different geographical areas  and operational goals but both types are now being exported around the world and being adopted from the US to china which is probably the best endorsement they could have. 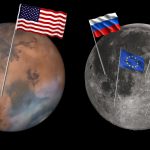 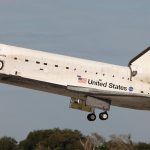 Was the space shuttle program doomed from the beginning ? 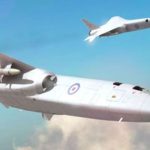 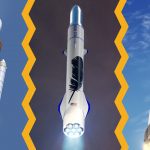 The New Space Race to the Moon between NASA, SpaceX and Blue Origin
Do NOT follow this link or you will be banned from the site!
This site uses cookies: Find out more.