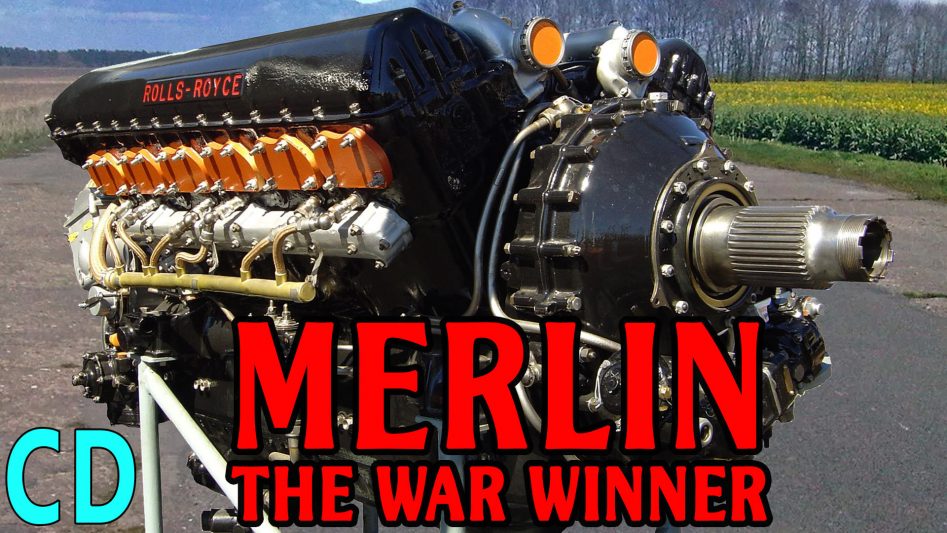 Now it may sound like a bit of a bold claim that one engine helped change the course of world war 2 but when you look at the evidence you will see that it has a lot of validity, but it wasn’t the only good engine around at the time, so how is it that the Rolls Royce Merlin is seen as the engine won the war.

Now just to clear things up it isn’t named after the legendary wizard Merlin but rather the Merlin; Britain’s smallest bird of prey, which is a type of falcon and known as a swift flyer and skilled hunter which is rather apt considering the planes it ended up in.

Rolls Royce named their inline aero engines after birds of prey and the Merlin itself can be traced back to the Kestrel, the companies first cast block engine which its self came from the Curtiss D-12 first developed in 1921 and one of the first truly successful cast aluminium block aero engines which would influence engine makers in England, Germany, and America.

The reason why an inline V-12 was used instead of a typical radial engine, even though they were heavier and more complicated to cool, was that an inline engine has a small frontal cross-section with less drag allowing slimmer more aerodynamic and ultimately faster planes to be built such as the Supermarine S series racing seaplanes.  These seaplanes were powered by the Rolls-Royce R and won the Schneider trophy on multiple occasions and the inspiration for the iconic Supermarine Spitfire also designed by RJ Mitchell.

The V-12 configuration which is essentially two straight-six engines mated together inherited the straight sixes natural balancing and smoothness, making it ideal for relatively light and fragile airframes like the spitfire without shaking them apart.

But inline engines in a plane have a problem with cooling. A rotary has all the cylinders in the airflow but an inline narrow-angle V configuration engine only the first 2 cylinders at the front are exposed with the rest behind them, so they have to be liquid-cooled. However, liquid-cooled engines have the advantage of being more efficient at removing heat and also work better at higher altitudes where the air is thinner.

This allows them to be in a higher state of tune and to use superchargers and turbochargers to produce more power with up to 100 octane aviation fuel which was to prove crucial in the high altitude aerial dog fights and for high altitude bombers.

By the early 1930s, the highly developed Kestrel engine was near the maximum output that its design could achieve, and Rolls-Royce was looking for a future engine.  The Air Ministry wouldn’t invest in a new engine, so Rolls-Royce committed company funds to develop a new 27 Litre engine and called it the PV-12 or Private Venture 12 because it was without government funding.

In the mid-1930s the PV-12 was still a problematic and unreliable engine but in 1935 it received a huge development boost as it was chosen to power the Air Ministeries new high-speed fighters, the Spitfire and Hurricane and its name was changed to Merlin.

From then on, its reliability steadily increased and performance was aided by a new supercharger and by the outbreak of war the Merlin 2 was producing just over 1000 hp in the Spitfire and Hurricane Mk1.

Because of the huge volume of air the supercharged Merlin used at full power and with the open exhaust gases exiting at 2,100 km/h, it was realized that useful thrust could be gained by simply angling the exhaust gases backwards with ‘ejector exhaust stubs’ instead of venting them out sideways.

Experiments with different exhaust stubs produced a speed increase equivalent to 150 hp and also helped hide the exhaust flash at night. Something that would not have been possible if a turbocharger had been used instead of the supercharger.

This new combination of a powerful lightweight, narrow engine and the Spitfire airframe created a formidable fighter that could outmaneuver and out-accelerate the opposition. It was also used in the Hurricane, Lancaster and Mosquito aircraft and eventually as a unitized power plant for 45 different aircraft including the Bristol Beaufighter, Boulton Paul Defiant II, Handley Page Halifax, and Vickers Wellington.

This one engine, many planes approach allowed the relatively simple to build Merlin to be mass-produced in ‘shadow’ factories across England, Scotland and later under license by Packard in the US whose mass production expertise would be key to its successful mass production.

But the Germans also pushed ahead with their developments and in 1941 introduced the Focke Wulf FW-190A with a 42-litre radial BMW 801 engine which could outpace the Spitfire in climb and speed.

Within weeks the Merlin 61 was introduced with a much improved two-stage supercharger developed by Dr Stanley Hooker.  With less weight and now more power the spitfire Mk9 could once again outperform the FW-190A and maintain the edge.

The Spitfire’s other main adversary was the Messerschmitt Bf-109E fitted with the 34 litre Daimler-Benz DB 601 inverted V-12. This had an advantage over the Merlin in that it had a mechanical direct fuel injection system whereas the Merlin used twin-float chamber SU carburettors. This meant that in a dive the Merlin could cut out for a few seconds due to the mixture leaning from negative “G”, something which could prove deadly in aerial combat.

The problem was solved by an engineer at the Royal Aircraft Establishment Farnborough.  Beatrice “Tilly” Shilling developed a simple flow restrictor and carburettor diaphragm to mostly cure the problem just in time for the Battle of Britain. Eventually, an injection carburettor would be developed by Bendix to fix it once and for all.

The Merlin engines also proved to be very resilient in battle. There are many accounts of Merlin-powered bombers losing half there engines to flak or fighters and flying home on the remaining ones at full power boost for hours with no sign of distress, much longer than was recommended by Rolls Royce.

When Britain entered the war in1939 it was using 87 octane fuel while the Germans already had 100 octane.  Even though the UK was able to produce high octane fuel in limited volumes in the 1920 and 1930s for the Schnieder Seaplane races, it was not able to mass-produce it by 1940.  Rolls Royce tested the Merlin with 100 octane and found that it allowed about 135 hp in extra boost. By the time of the Battle of Britain, the US Standard Oil Company had cracked mass production of  BAM100 (British Air Ministry 100 octane) and sent it over in tankers just before the battle.

This proved decisive, the 100 octane fuel allowed the extra boost from the supercharger to give the Merlin a performance edge to the Spitfire and Hurricane, enabling them to down enough German planes in the 3-month campaign to convince the German high command that daylight raids on RAF bases could not be sustained and switching to nighttime raids and beginning of the Blitz instead-but effectively saving the RAF.

Later in 1943 a new 120 octane fuel was introduced and boosted the Merlin 66 to 1560hp. This gave the Merlin 66 powered Spitfire Mk 9 and mosquito the speed to intercept the V1 flying bombs at low altitude.  Later development of the Merlin and fuel at 150 octane, provided 2,000 hp engines, all with the same 27 litre engine block

It wasn’t only fighters to benefit from the Merlin, in fact most of the Merlins produced went into the AVRO Lancaster heavy bomber which used four of them. From 1942 onwards, the RAF mounted increasing larger nighttime raids leading up to the  ‘1000 bomber raids’ on German cities, industrial areas and key military targets. They destroyed Möhne and Edersee dams in the dam buster raids, Sunk the Battleship Tirpitz with the 12,000lb Tallboy bombs and badly damaged the V2 production at Pinnamund.

Further development of the Lancaster allowed it to carry with the Grand Slam 22,000 lbs bombs – the largest of the war and most powerful non-nuclear aerial bomb ever used in combat up until the American MOAB in 2017.

However, when round the clock bombing started in 1943 with the US 8th Airforce operating daylight raids and RAF night-time ones, the US losses rapidly began to mount up on raids deep into Germany where there were no fighter escorts.

The US theory of heavily armed self-defending bombers flying to the target with little in the way of  fighter escort was repeating what the Luftwaffe had done 3 years earlier against Britain and with losses increasing to 27% in Oct 1943 and 34% of the planes that made back having to be scrapped, the 8th  Airforce had to stop until a solution was found.

But the answer was soon at hand when Rolls Royce research establishment at Hucknall installed a Merlin 65 into a North American Aviation P-51 mustang.  The resulting airplane’s performance lead the way to replacing the Allison engine with the US Packard built Merlin creating the iconic Mustang P-51B/C  also known as the by the RAF as the Mustang Mk3.

This transformed it into a plane that would be able to take on and beat the best German fighters at low or high altitude thanks to the Merlin’s two-stage supercharger and provide air support to the US bombing raids from England to Germany and back again with its 1600km or 1000 mile range.

Soon after the introduction of the P-51 to escort duties, bomber losses dropped dramatically. However, when Maj. Gen. James “Jimmy” Doolittle took over command of the 8th Airforce he allowed the P-51Ds to go after the Luftwaffe fighters and not stick close by the US bombers.

The plan changed from protecting the bombers at all costs to destroying the fighters. The bombers would be the bait and the P-51s would go after and destroy of the German fighter force to achieve air superiority.

This and the use of the other Merlin-powered Hurricanes, Spitfires and Mosquitos allowed the allies to gain air superiority over western Europe and mount the D-day landings with confidence. It also enabled them to bomb key targets at will as the war progressed to destroy the German industry and military.

Over 168,000 Merlins were produced, with 55,000 of those from the US Packard factory.  An unsupercharged version of the 27 litre engine block was  also used to power tanks and called the Meteor, and Sea Merlins powered some naval craft, but its main use as an aero-engine is what made it decisive

In the months after the Battle of Britain ended, Air Chief Marshal Arthur Tedder of the R.A.F. was asked about the Battle of Britain, and replied:  “Three factors contributed to British aerial victory: the skill and bravery of the pilots, the Rolls‐Royce Merlin engine and the availability of suitable fuel.”

Without these England would have been forced to into an armistice or outright surrender allowing Hitler to close down the western front and concentrate on his attack of the Soviet Union, and with all the extra men and equipment at his disposal up the final outcome may well have been rather different.

Without the mass production of the Merlin that allowed the 1000 bomber raids of the RAF with the Lancasters and USAF with the support of the P-51, the war would probably have dragged on much longer and England might not have been in a position to become the staging post for the D-Day landings and war in the west would have been very different.

So now we can see why the Merlin called the engine that won the war.