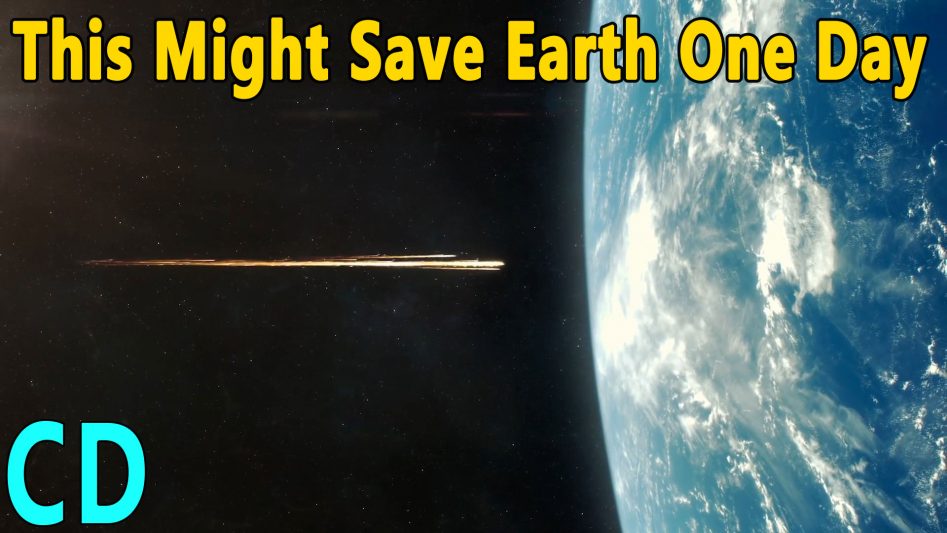 Now with all our energies seemingly focused on the current biological threat we shouldn’t forget that there are other things out there may also have our name on them and that could pose an even bigger existential threat. But at least we are moving in the right direction and taking the threat more seriously and soon we will be testing for the first time to see if it is possible to redirect an asteroid the size of the great pyramid & weighing millions of tones with a spacecraft weighing 500kg, that’s just a little bit heavier than the largest Harly Davidson, If successful, the results of which may one day save us from a catastrophic asteroid impact.

Just as we’ve been downplaying the possibility of a pandemic for years and then getting caught with our pants well and truly down, we’ve also been doing the same with the possibility of a devastating asteroid impact with naysayers telling us that the threat is so tiny as not to worry about it.

But you only have to look at the Chelyabinsk incident of February 2013 when a meteor about 20 metres across and weighing some 13,000 tons came literally out of the blue and exploded with a force equivalent to about a 4-500 kilotons nuclear weapon, that’s about 26 to 33 times that of the Hiroshima bomb and that was near the city of Chelyabinsk in Russia. Although it exploded at a height of about 30km, 7200 building were damaged and about 1500 people were injured over six cities in the area, this was the largest known natural object to hit the earth since the Tunguska event of 1908 in Siberia.

The worrying thing was that we knew nothing about it until it hit because it did the old fighter pilot trick and came out of the direction of the sun. Also, because of its small size it had not been mapped and was therefore unknown, though if it happened now it would probably be detected days or weeks earlier by NASA’s ATLAS or Asteroid Terrestrial-impact Last Alert System.

We were lucky that Chelyabinsk meteor was small and rocky and that it came in at a shallow angle allowing it to break up and disperse the shockwave over a wider area. If it had been a metallic core and come in at a much steeper angle it would have hit the ground and done much more damage even if it was the same size.

Detecting these is one thing but stopping them is another. We know about the planet killers because they are big which makes them easy to track, it’s the smaller 150 meter sized ones which pose the biggest threat. Its thought that there are about 25,000 of these, of which about 8,000 are known.  Their small size makes them difficult to detect but if one were to hit the earth it would have a big regional impact and would easily wipe out a large city and damage much of the surrounding area.

This is where NASA’s DART mission comes in.  DART is part of AIDA, the Asteroid Impact and Deflection Assessment, a co-operation between ESA and NASA with a two spacecraft missions, the NASA’s DART and ESA’s Hera.

The DART or Double Asteroid Redirection Test will be the first time that we have tried to move an asteroid from its intended course. The thinking is that if we found an asteroid on a collision course with earth and there was enough time, we could hit it with a kinetic impactor and push it very slightly of course. If it was far enough away in space you would only need to change its course by less than a millimetre per second. Over millions of kilometres and several years, the cumulative effect would mean that it would miss the earth completely.

This method of giving it a bit of a nudge would be preferred to trying to blow it up with a nuclear weapon as we could just end up with lots of small but still significantly sized chunks that would just cause damage over a much wider area.

The target for the mission is a binary asteroid called Didymos. This consists of the main Didymos A which is about 750m diameter and a smaller minor planet moon or Didymos B but it also has been nicknamed Didymoon which is 165m across

Didymos will make its closest approach to earth at 13 million km in 2022. The smaller Didymos B makes an ideal target because its just about the right size and we already know its orbit around Didymos A so we can measure what the effect will be when the impactor crashes into it. Its also worth mentioning that it is not on an earth crossing path so any changes won’t send it suddenly hurtling off in our direction.

NASA’s DART is a co-operation between NASA and the Johns Hopkins Applied Physics Laboratory and will launch in July 2021 with the impact date in October 2022. The second part to the mission will be the ESA spacecraft Hera, this is scheduled to launch in 2024 and arrive in 2027 and will orbit Didymos B to study its composition and internal structure as well as the effect on Didymos B’s orbit after the impact.

The main part of DART is a 500kg impactor and in the final few hours, DART will be flown autonomously by the onboard computer using the SMARTNav algorithm for guidance, navigation and control. This will make use of a sun sensor, a star tracker and a camera to look for Didymos B and guide itself for the final impact.

Its thought that when it hits at 6km/s, it will change Didymos B’s velocity by 0.4mm per second. DART will also carry a CubeSat from the Italian Space Agency  called LICIA. This will separate from DART two days before the impact and will take images of the impact itself and the ejected material plume to see if the velocity of the plume has an additional effect.  Ground stations will monitor Didymos B to see if the impactor has made a difference to its orbit over the coming months and years.

The AIDA project is also a testbed for a lot of new technology, from propulsion to autonomous control to laser communications between satellites and earth. Once in space DART won’t be propelled by a conventional rocket engine but by the most powerful ion thruster yet made, the NASA Evolutionary Xenon Thruster or the NEXT- C. This uses 22m2 of new flexible roll out solar panels that can produce up to 6.6kw of electricity to power the NEXT-C engine.

ESA’s Hera will arrive 5 years after the DART mission to assess the long term effect of the impact on Didymos B’s orbit. Like DART it will also be carrying CubeSats but this time two called Juventas and APEX.

Hera will build on the Rosetta mission and will also use advanced autonomous control to guide its self to Didymos B, imaging it with hyperspectral scanning and a Lidar to measure the size and shape of the moon and the impact crater. The data gathered will be to used fine-tune computer models for future asteroid missions both redirection and also for the possibility of mining them.

The CubeSats will work together with Hera using a network system to completely map the moon. The second Cubesat Juventas will scan Didymos B with a monostatic radar to discover its internal structure and towards the end of their mission, both CubeSats will attempt to land on the Didymos B and use the onboard accelerometer and gravimeter to work out its gravity and surface properties.

If all goes well will have a much better understanding of how well the impactor method could work in a future scenario, not only changing the course of a smaller asteroid, but bigger ones too by may be slowing or stopping their rotation and allowing the sun to heat up one side more than the other to create outgassing jets that would    act as thrusters to change its orbit for us.

So what do you think of this first mission to change the orbit of an asteroid, let me know in the comments below and don’t for getting to subscribe, ring the bell notification, thumb up and share.