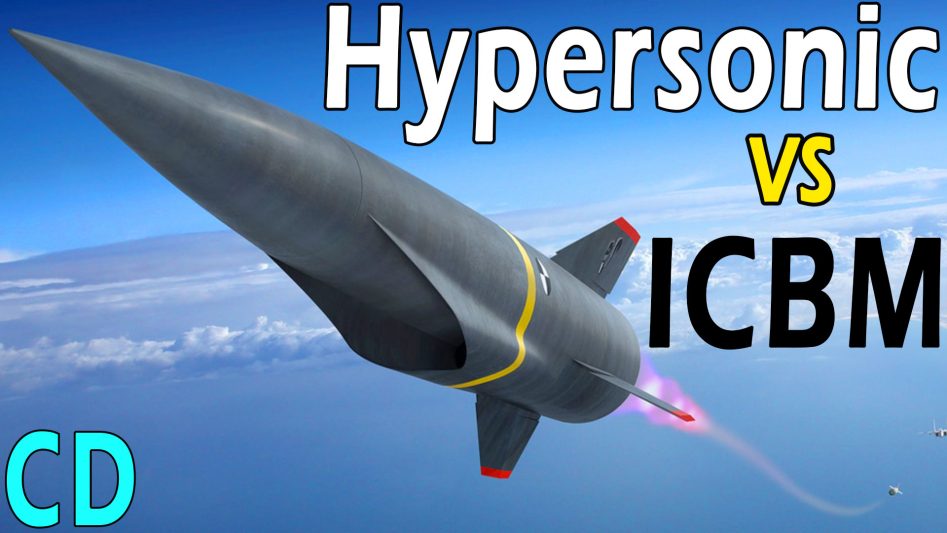 Over the last 60 years or so, intercontinental Ballistic missiles or ICBM’s have become the ultimate deterrent in the defence arsenals of the US, UK, Russia, China, France and other countries.

This produced the doctrine of M.A.D or Mutually Assured Destruction where if there was a nuclear conflict, no one would come out a winner. But as anti-ballistic missile systems or ABM’s have become better in recent years there is the belief that at some point a first strike by a country with a fully developed ABM system could lead to a winnable nuclear conflict if the retaliatory strike could be neutralised.

However, in the last decade or so a new class of hypersonic weapons has been in development that promises to be able to not only deliver a warhead to a target in record time but to do it in such a way as to make it almost impossible to shoot them down, so how do Hypersonic missiles compare to the decade’s old tech of ICMB’s and are they really any better ?

So what are hypersonic missiles and why are they causing so much concern. Well, first we have to look at ICBM’s and the clue is in the name, Intercontinental “Ballistic” Missile, a ballistic object is one which is following a path under the force of gravity.

A bullet fired from a gun or a bomb dropped from a plane are also examples of ballistic weapons, once they have been fired or released they follow a predictable trajectory.

An ICBM is no different, if one is launched from one point on the earth and aimed at another point maybe thousands of kilometres away will follow the same path each time. It will launch up into space, the launch phase, fly through space where builds up its speed and does any course correction whilst still under power, the mid course phase, then the payload will detach and the warheads and decoys will then fall to their assigned targets, the descent phase.

Because the ICBM’s fly high they can be easily observed with radar and space-based tracking. It’s in the midcourse phase where they are most vulnerable and their trajectory can be worked out for to ABM’s to intercept them.

Whist this is do-able it is still extremely difficult and is described as like shooting a bullet with a bullet. The US has spent decades in developing ABM systems and its only the last few years that they could say they had a workable solution but it can only deal with a small number of incoming missiles at once and is strategically placed to intercept may 2 or 3 coming in over the Pacific from North Korea.

Now imagine that you could launch a missile that would travel as fast an ICBM but instead of having it just fall from space on to its target, it could fly like a cruise missile and take evasive action.

This now becomes virtually unstoppable with current ABM systems, and this is exactly what the Russians and Chinese are doing because they believe that if the US can make its ABM systems tackle a much greater number of missiles the balance of power would shift to the US and allow it to make a first strike knowing it could destroy any missiles sent in retaliation.

There are two categories of Hypersonic weapons, hypersonic glide vehicles and hypersonic cruise missiles. Hypersonic glide vehicles work a bit like an ICBM in that they are launched on a rocket into space but then they descend to the top of the atmosphere and use the shockwave created the body of the craft in a phenomenon called compression lift to skim across it, then as it nears its target it drops down and acts like a steerable hypersonic glider which makes it much more difficult to target by anti-missile dense systems.

Hypersonic cruise missiles can also be launched on a rocket or from a plane but instead of going into space they fly through the atmosphere like a normal cruise missile. The difference is in their speed, instead of using a conventional jet engine like in the Tomahawk cruise missile, they use a SCRAMjet engine which only works above MACH 4 so they have to initially boosted to that speed by a rocket, then the SCRAMjet takes over.

This is where hypersonic missiles have the upper hand because they can use what is known as depressed trajectories to fly much lower but still at hypersonic speeds of upto MACH 25 for the gliders, so they can get closer to the target before being detected. This not only leaves very little time for the opponent to figure out their course, they can also fly under existing ABM systems which are designed to look for and intercept ICBM’s coming in high from space and on a predictable trajectory. Their hypersonic speed makes them almost impossible to shoot down at low altitude and they can manoeuvre so their course can’t be predicted.

Hypersonic cruise missiles have also be touted as extremely potent anti-ship missiles because even without a warhead, hitting an aircraft carrier at MACH 5 or above would cause a lot of damage, it may not sink the ship but it would more than likely put it out of action.

But there is a problem with hypersonic missiles which is affecting all the countries who are developing them and its caused by the very thing that gives them their advantage, namely their speed.

Flying at hypersonic speeds in the atmosphere creates a tremendous amount of heat which increases with speed. The SR-71 Blackbird spy plane flew at MACH 3.2 at 70,000 ft where the air is only about 5% the density of that at sea level and that caused the leading edges of its wings to reach up to 560 degrees Celsius, that’s hot enough to melt some aluminium alloys.

ICBM’s also travel at hypersonic speeds during their final descent stage but only for a minute or two, and use an ablative heat shield to protect them much like returning spacecraft, hypersonic weapons on the other hand, travel the almost there entire journey which could be thousands of kilometres at MACH 5 and above.

At sea level where the air is at its densest, the maximum speed of a hypersonic missile is about MACH 7. The heat created at these speeds can cause the materials that the missiles are made of to exceed 2000 degrees Celsius so they have to be made of exotic composites. At these temperatures the air starts to chemically react with the materials, causing them to break down. It’s also hot enough to cause plasma to form around the vehicle which can affect the GPS guidance systems and course correction commands sent to it from outside.

This affects the accuracy of the missile. At hypersonic speeds variations in the wind, temperature and other environmental factors are magnified making it much more difficult to target something like a ship accurately compared to normal subsonic cruise missiles.

Hypersonic weapons also place the leaders of the country being targeted in a very difficult position because there is virtually no difference between a nuclear-armed missile and a conventional warhead when it comes barrelling over the horizon at several kilometres per second and with so little time to react they might just order an all-out retaliation rather than wait to see how big the bang is and this is why they are seen as so destabilising.

At the moment there is nothing much that can stop them except the equally exotic directed-energy weapons which even further down the pipeline than the Hypersonic weapons but with upgraded space based detection it will be possible to track the hot missile bodies almost from their launch which will give about the same amount of warning time as that of an ICBM.

So it’s unlikely to affect the balance of power for a while because there is still no practical way to defend against a full-scale attack from dozens to hundreds of ICBM’s, so even if Russia or China were to have hundreds of hypersonic missiles ready, the US still has atleast 1500 warheads that it could retaliate with.

Now the US has been seen as in a bit of a catch up situation on hypersonic weapons with both China and Russia taking the lead even though the US has been working with them for decades. The thinking in the US being that an ABM shield was a better approach, something which now we can see can be side stepped with hypersonic technology which just illustrates the point that things don’t stand still, whats a good idea today isn’t necessarily going to be a good idea tomorrow and you have to keep learning new skills and techniques, which brings me on to our sponsor for this video Brilliant.