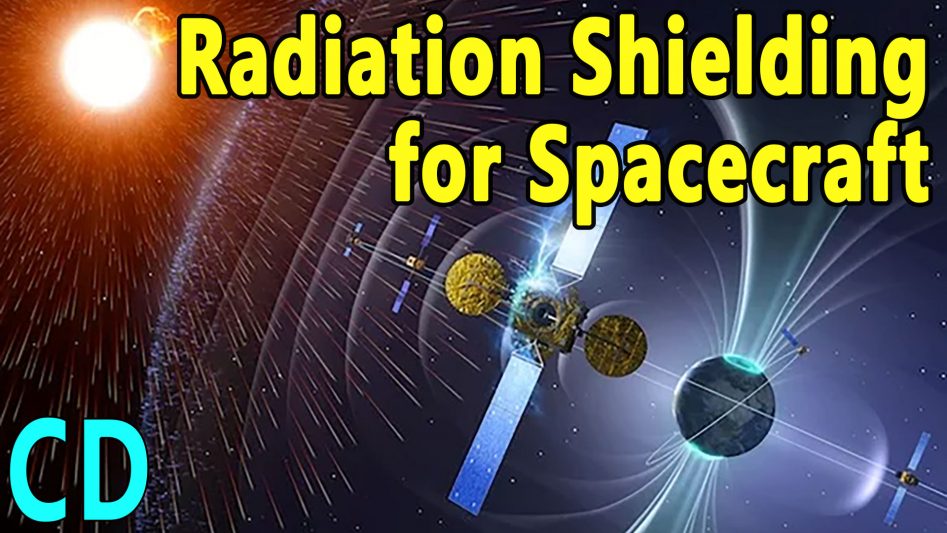 Although we dream colonising the moon, travelling around the solar system and one day beyond to the stars, space is a dangerous place and not least because of the radiation from our sun and galactic cosmic rays. We only found out about the bands of trapped ionising radiation that surround the Earth, the Van Allan belts just after the launch of Sputnik and these have been a fertile ground for moon hoaxers ever since claiming that they are so dangerous that no one could get through. But as we venture deeper into space for much longer duration mission like those Mars and beyond, how do we protect the spacecraft, the crews and the control electronics and computers from radiation.

When most people think of radiation,  X-rays, nuclear power and atomic bombs normally spring to mind, all things that are we would need to be relatively close to, to be affected by but in space, the radiation comes from millions or billions of km away and often much, much farther.

The sun is the biggest source in the solar system emitting both electromagnetic radiation like X-rays and some gamma rays but also charged particles, the nucleus of atoms with the electrons stripped away as well as the electrons themselves.

The other source of radiation are galactic cosmic rays, these are mostly gamma rays and high energy charged particles that were created in events like supernova explosions, thousands or even millions of light-years.

These types of high energy radiation are called ionising radiation because when they strike a normal atom, they have enough energy to knock the electrons off leaving just the nucleus which is then called an ion.

This is where it becomes dangerous to us and the electronic equipment we use to control and fly the spacecraft.

When electronic devices are exposed to ionizing radiation, a single charged particle can knock thousands of electrons loose which creates electrical noise and in modern digital chips likes CPU’s and memory, it can cause transistors to turn and off changing the bit data from a 1 to a 0 or vice versa, scrambling information and causing computer crashes.

With a high enough or long enough dose of radiation, the chips are physically damaged and stop working correctly.

Since Apollo, control system computers in spacecraft use radiation-hardened components and have had redundancy built-in because its thought that in normal operation it’s highly unlikely that both the main and backup system would have the same error. This type redundancy was built into the IBM flight computer that controlled the Saturn V rockets, which we have a video on.

In the human body, these ionising particle act like tiny subatomic bullets which can break apart the chemical bonds, kill cells and damage DNA leading to cancer. At low levels like the background radiation we live with every day, the damage is not a problem and the body replaces the damaged cells easily.

Its when the radiation level rises it becomes a problem and that also varies depending on energy the charged particles are carrying but in general it the total cumulative dose that matters. A moderate dose over a long time can cause more damage than a single very short high dose, as the body is unable to repair the consistent ongoing damage fast enough. This is why its OK for you to have an X-ray every so often but why the radiographers are behind shielded doors and glass to keep their cumulative dose as low as possible.

You might not think it, but Astronauts are radiation workers. Once out in space, they are exposed to higher levels than on earth because the radiation can go through the walls of the spacecraft they are in. Astronauts on the International Space Station wear dosimeters to measure their accumulated amount, though the ISS stays close to the earth and is protected by the earth’s magnetic field, once they have reached their lifetime limit, their job as an astronaut is over, due to the increased risk of cancer that any continuation of that work would give them.

However the ISS also regularly files through the South Atlantic anomaly, this is where the Earths inner van Allan radiation belt comes closest to the earth and the radiation levels can be much higher.

The Van Allan belts are areas where the charged particles, mostly energetic electrons and protons which come from the sun and also galactic cosmic ray particles are trapped by the Earth’s magnetic field.

When the Apollo mission went to the moon, they knew about the radiation belts but the chose routes with would take them through the least dense areas with lower levels of radiation and they were only in them for a couple of hours going and coming back with time for the body to recover in between.

The outer skin of the command module on Apollo was made from stainless steel sheets with a honeycomb structure in between and lined with fibreglass insulation. The inner pressure shell was made from a  similar honeycomb build but this time made from aluminium, which might not sound like much but it did work.

Counter to what many think, having a thick metal shielding like lead in a spacecraft could make things worse as well as making the craft too heavy to get into space.

This is because of the Bremsstrahlung effect. When a charged particle hits another charged particle or the nucleus of an atom, in this case, the skin of the spacecraft, it slows down, this releases energy in the form of X-rays which then affect the crew or equipment.

The best way to shield against charged particles is to use a material with a high hydrogen content that absorbs them. In the original Apollo command module design, a tetrafluoroethylene plastic tissue was used in the ionising chamber walls to help absorb these particles but is was also flammable and helped the fire spread in the Apollo 1 accident that killed the crew of  “Gus” Grissom, Ed White, and Roger Chaffee.

Afterwards, to reduce the fire risk, aluminium was used in place of the plastic tissue even though it was not ideal from Bremsstrahlung point of view but in recent times a new approach has been developed using Z graded materials.

The idea behind this is that you have several layers of material which get progressively lighter by their atomic number from the outside in. There might be a tantalum outer layer with other layers such as tin steel, copper through to aluminium or polypropylene and boron carbide in the innermost one.

This graded shielding would scatter the protons and electrons as well as absorb gamma rays. Each of the layers would absorb the X-rays created from the Bremsstrahlung effect by the previous layer and the boron would absorb the neutrons. In the end, the amount of radiation would be lowered to a safe level but requiring less of it compared to shield comprising of a single material.

The most effective way to shield a spacecraft is with the simplest of materials, water it is 2/3 hydrogen. Water is so effective at reducing radiation it’s used to store highly radioactive nuclear fuel rods. For every 18cm of water, the radiation is reduced by about half.

A cylinder of water around the crew quarters 1 meter thick would give enough protection for a crew on the journey to Mars of six months or so but that they have Earth-like radiation levels over the transit time.

The only problem with this simple solution is that water is very heavy, with one cubic meter of water weighing 1000kg. Providing a 1-metre thick shield for a tube-like crew quarter measuring 5.5m x 22m would weigh about 330 tones, greatly increasing the number of launches required to get the mission into orbit plus the extra fuel that would be required for acceleration and deceleration of the extra mass once in space.

Another method that is being looked at is to create a magnetic field like that of the earth but around the spacecraft using superconducting magnets. This would be effective against charged particles but it would not effective against X-rays and gamma rays so you would still need tradition shielding methods too.

So for the foreseeable future, we are going to be using shielding which is as light as possible but with the best possible shielding and absorption characteristics. This Basically means that it will do just enough to protect the crew to perform the mission safely but with little margin for unexpected events like solar flares.

So what do you think about radiation issues that future astronauts will face, let me know in the comments.