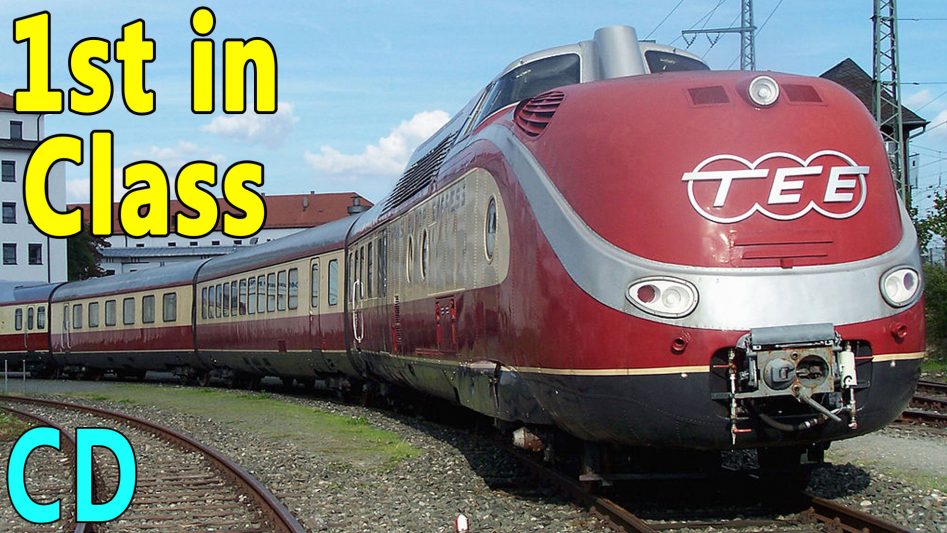 The Trans Europe Express was the first international railway service to link up major cities in western Europe with high-speed trains, crossing borders with minimal stops and disruption and allowing business people and wealthy travellers to travel from one country to another and back again within a single day. All this in style and comfort and to offer rail travellers a luxury alternative to the increasing use of air travel but what happened to this iconic European rail service.

This new service was designed to use high-speed trains to try and compete with the rising use of air travel. Trains had advantages over planes, they weren’t affected by bad weather any near as much, there was no checking in time and the stations were often in the centre of cities where people lived and worked, not far away in the countryside.

This made the Trans Europe Express attractive to business people and regular travellers who could  travel from one country to another in comfort and style. Where possible the schedules were arranged so that someone could start their journey to the in the morning, have their meeting at the destination in another country at lunchtime and then catch the return service and be back home in the evening. Customs services at borders were speeded up by having customs officers travel on the train in their own specialised compartments.

The founding members of the TEE were the state railways of Belgium, the Netherlands, West Germany, France, Italy, Luxembourg and Switzerland with Spain joining later.

Now although this sounds like one railway, it was made up of several different train designs which would run under the same TEE banner. The reason for this was because the different state railways couldn’t agree on one unified train and because there was no unified railway power system so all the original TEE trains would be diesel powered but one thing they could agree on is the colour scheme of red and cream.

The four main designs were the French, German and the Swiss-Dutch and Italians. Some were newly designed for the TEE and others like the Italian Settebello and the Riengold Express which ran from the Netherlands to Switzerland were redesignated as TEE trains.

Each TEE group designed their own trains, the Dutch-Swiss created the RAm TEE and NS DE4. Five trainsets were produced with 3 RAm TEE’s going the Dutch and 2 NS DE4’s to the Swiss. These were powered by one power car at the front, three coachs and a driving trailer car at the rear.

The Swiss later went on to produce the RAe TEE 2, a five car trainset which was the first train that could handle the four different voltages that were used across Europe and as such they dropped the Deisel power car.

The Riengold Express used mostly German rolling stock but in 1962 they introduced the dome cars with raised glass roofs, the first of this type in Europe. With track improvements along the route and the new rolling stock, the Riengold became the fastest scheduled train in Germany in 1964.

The first French and Italian TEE trains ran diesel multiple units, the french ones being swapped for the second-generation Italian FS ALn 442-448’s because the French RPG-825s couldn’t handle the mountain routes and slowed down too much for the express schedule.

In the 1964 the SNCF CC 40100, the most powerful locomotive in the world at the time and again able to run of the different voltage systems across Europe was used with the stainless steel ribbed inox coaches which were inspired by the American streamliners. With the introduction of the “Mistral” which ran from Paris to Marseilles and Nice and powered by the CC 40100, it was the fastest train in Europe with an average speed of 130km/h until the arrival of the TVG.

In 1974 the Italians redesignated possibly the most designer train in the world the “Settebello” to be part of the TEE across Italy. Considering this was originally introduced in 1953 it made almost every other train at the time look old fashioned with the driver having his own cockpit on the top of the front car and the passengers able to sit in the forward lounge underneath the driver right at the front of the train. The train and interior was designed by Giulio Minoletti, a celebrated designer of the time and it was called the Settebello because of its luxury interior design and furniture and that it consisted of seven cars. None of the seats in the forward lounge were reserved so anyone could go to the front of the train to enjoy the panoramic view ahead.

The German TEE was the newly designed Deutsche Bundesbahn Class VT 11.5 and is probably the most well known of all the TEE trains outside of Europe with it large TEE logo on the front and to many it represented the German economic miracle. It was also because it was also popularized by the German electronic group Kraftwerk with their 1977 album Trans Europe Express.

Now here is a little bit of info that Kraftwerk fans will appreciate but very few them will probably know about. The German Trans Europe Express train, the VT 11.5  was designed by Klaus Flesche whilst he was the head of design at the MAN Machine company, Man Machine being the follow up album to Trans Europe Express in 1978, confidence, maybe, maybe not, but Kraftwerk did like their obscure references.

The VT 11.5 was based on the prewar german diesel streamliners like the flying hamburger and the post war VT 10.5. These were 7 unit trainsets with a power car are each end with three seating coaches, a dining and kitchen car and a dining car with a bar. The seating coaches had large reclining seats similar to those on a plane.

The TEE was never going to be your everyday commuter train stopping at every station along the route. Initially, 70 main cities of the participating countries would be linked by TEE service with that rising 130 by 1974.

It was also an exclusive service and there was only one class, 1st class and you had to pay not only for a 1st class ticket but also a premium surcharge which increased with the length of the journey.

As the service was aimed at the more wealthy regular travellers and business people, there were hostesses to look after the passengers similar to a plane, everyone had a seat reservation and the number of passengers was limited to 120 or less depending on the trains used. For business people there were private writing rooms with trilingual secretaries on hand that could send telegrams or make reservations ahead of time for when they reached their destination.

The food and accommodation were also 1st class as well with dining cars serving up top quality meals and lounge areas and a bar like that of a hotel were people could meet and relax and well as sleeping cars for the longer overnight journeys.

By 1975 the TEE network had its widest coverage and ran from Denmark to the toe of Italy but as time went by and the business passenger moved more to air travel as new airports and more regular services became available, the German railways started to convert their TEE trains into intercity trains with a 1st and 2nd class service.

Soon other countries followed suit and the relatively expensive TEE services were phased out by 1984 with the arrival French TVG and the German Intercity with a new service called Eurocity being introduced which had 1st and 2nd classes although the name TEE was still used on some routes in France only up until 1991.

The iconic trains themselves were mostly scrapped or sold, the Dutch RAm TEE was sold to Canada in 1977 after a plan to convert them to electrical power came to nought. They ran there until 1992 before being retired, though 5 train cars were eventually brought back to the Netherlands for restoration to the original TEE spec by the Trans Europ Express Netherlands Foundation.

One of the German VT 11.5 trainsets was preserved in it’s the original condition and runs special on occasions and for private hire and another power car is located at the Nuremberg Transport Museum.

And as for the Italian Settebello, only three were ever made and by 1998 they were retired from service. Two were scrapped but one was saved though it was abandoned of years and vandelised but in 2016 it was rescued by the Italian State Railways’ Heritage Foundation and is being returned to it’s original condition with the furniture and interior that made it famous in the first place and is to be used to as a luxury train for tourists. So I hope you enjoyed the video and thanks for watching, don’t forget to subscribe, click on the bell notification and share