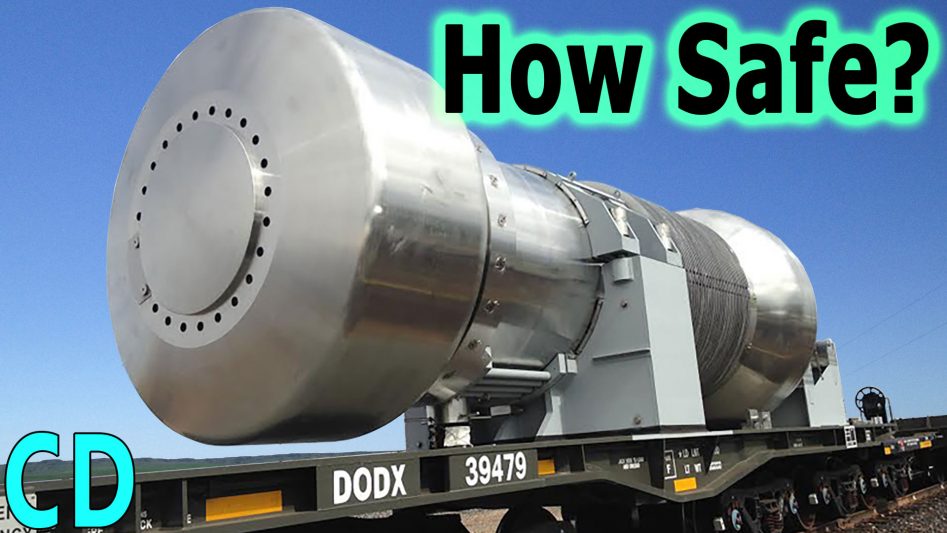 Every day tens of thousands of shipments of radiative materials are made by road, rail, air and sea around the world with everything from the smoke detectors that contain americium-241 to the refurbishment of nuclear warheads but how safe is the transporting of these materials either from accidental damage or from those wanting to get their hands on it for much less desirable reasons.

Now when we hear phrases like nuclear shipment, we immediately think of nuclear warheads or the highly radiative waste from nuclear power stations but in reality, the vast majority radioactive material that is moved around is much lower level.

According to the EPA, in the US alone there are about 3 million shipments each year that contain radioactive materials which are used in medicine, power generation, research and manufacturing and of course the military.

Although many people have a negative view of anything radioactive, these can also is extremely beneficial and is much more widely used than many think.

Radiation from radioactive sources is used to sterilise many foods to kill bacteria and increase it’s shelf-life as well as sterilise single-use medical equipment without the need to reopen the package.

Devices like the gamma knife use over 200 separate pieces of Cobalt-60 to produce multiple highly focused beams of gamma radiation to precisely target brain tumours, and of course there are the medical X-rays but X-rays are also used for industrial processes such as examining the integrity of welds to make sure there are no flaws.

There are also millions of smoke alarms which use americium-241 and luminous signs which glow in the dark without the need to be exposed to light which used to contain radium and now use Tritium which is a very low energy beta emitter and these are just fraction of the uses that radiation has been put to.

But the problem for humans and virtually all living organisms is that radioactivity is something best avoided. In very high doses it can kill small things like bacteria almost instantly and lead to a slow very painful death for humans in a matter of days by killing cells directly or stopping them from reproducing.

In low doses but for extended periods of exposure it can lead to the mutation of DNA causing cancer and birth defects, so moving radioactive material around is something that needs to be done carefully.

Radioactive material or a Radionuclide can also vary widely from the Tritium in luminous signs to Isotopes like Polonium-210 which if gets into the body by breathing or swallowing is so deadly, not chemically but radioactively, that toxicologists estimate that just 1 gram could kill 50 million people, and yet, you could carry it around in a paper bag and not be affected by it as the alpha particles it emits are easily blocked.

It’s often surprising to think that highly radioactive materials are routinely carried on everyday transport systems, on the roads, railways and in the air and by sea.

Most of these materials are solids and small and have a low to moderate radiation levels so they are relatively easy to handle and transport. Liquids and gases are rarer and are a bigger challenge because a spill of liquid or release of gas would be more difficult to contain and pose a larger risk to the environment.

Its when we get to the transport of nuclear weapons and spent nuclear fuel that things are alot more difficult, not only from a safety point of view but also one of security.

The biggest fear that many people have is that if the transport of some spent nuclear fuel were to be in an accident for example then it could have a similar effect as to what happened at Chernobyl.

All the major nuclear incidents like Chernobyl, Fukushima and Hiroshima have involved dispersing highly radioactive isotopes such as cesium-137, strontium-90 and iodine-131 amongst many others into the air or water, all of which come from the fission of uranium or plutonium and this only happens during a nuclear chain reaction in a reactor or atomic bomb.

The difference between a transportation accident and what happened at Chernobyl was that at Chernobyl a nuclear reaction went out of control and the explosion, heat and fire that followed was able to disperse highly radioactive material into the air or if it had melted through the floor it would have entered the groundwater and would have been spread across the land by streams and rivers.

So when transporting fissile material like enriched uranium or plutonium, the most important thing is to keep these types of materials dispersed in small amounts and away from each other so it can’t reach a critical mass and start a chain reaction.

One concern is if the consignment were to be in a fire hot enough to rupture the container and burn the contents inside then dispersal of some radioactive material could happen but to nowhere near the extent compared a critical nuclear meltdown.

To move spent nuclear fuel, special flasks are used. In the UK these 50-ton containers are made from a single piece of forged steel with sides 37 cm thick though in later designs for use with advanced gas-cooled reactors this is reduced to 9cm but with a substantial lead liner inside. The top is bolted on with bolts with a tensile strength of 150 tonnes each and the flasks carrying capacity is up to 2.5 tonnes of nuclear fuel.

A substantial number of tests were done on scale models before full-sized ones were subject to drop and fire tests from every angle.

In 1984 to show that these were safe to use on the public railway’s, Operation “Smash Hit” was organised for the press. This involved a 138-ton locomotive and three carriages being crashed in a flask at 160km/h.

The flask which was filled with water and 200 steel rods to simulate carrying the nuclear fuel rods and was also pressurized to 6.9 bar before the test.

The train was destroyed in the crash but the flask had only superficial damage with a few bent fins on the outside. When it was checked afterwards the pressure inside had dropped by only 0.02 bar or 2%.

The flask was then heat tested at 800C to show it could withstand a fire. Although it passed both tests some said that the speed should have been 270km/h to simulate a head on crash between two moving trains and that the heat test temperature was too low for a tunnel fire.

In the US,  locomotives fitted with six nike rocket engines were driven into 25 ton flasks mounted on a flatbed trailer at upto 130km/h and again with no serious damage to the flask or contents.

Although there have been accidents with trains carrying these flasks including one being dropped whilst it was transferred from the train to a lorry, no leakages have occurred so far.

But as least two serious tunnel fires have occurred since, the Summit tunnel fire of December 1984 at the Greater Manchester/West Yorkshire border in England and the Howard Street Tunnel fire in Baltimore, Maryland in July 2001.

A report issued by the State of Nevada into the Baltimore tunnel fire said if nuclear flasks had been involved that the steel and lead versions would have failed after just over 6 hours and the monolithic steel ones after about 12 hours. These could have contaminated up 82 sq km of the surrounding area along with upto an estimated 28,000 additional cancer deaths over 50 years.

To try and minimise this type of accident, nuclear flasks are only thing carried by these special trains and their routes and times are set so that they would not be passing other freight trains that could be carrying flammable or explosive loads in confined spaces.

But carrying nuclear weapons poses a greater threat because the fissile materials have to be in close proximity in order to work as a weapon and therefore are more like to create an accidental nuclear explosion.

Because the fissile material in nuclear weapons is just like all radioactive substances and has a half-life, certain elements crucial to there operation degrade over time so they need to be refurbished on a regular basis.

In the early days, atomic weapons had a separate plutonium core which was placed in the main bomb before use, without it there would be no atomic explosion just a large conventional one from the surrounding compression explosives.

But as the devices became smaller, they were made with the plutonium core as an integral part. Although they have many layers of protection to prevent an accidental detonation there is still a remote possibility that in extreme circumstances like a fire or violent accident, the explosives that trigger the nuclear reaction could either blow the device apart and spread radioactive material over the immediate area or create a limited nuclear blast or a fizzle. So great care is taken when moving them from one place to another with the routes being specially chosen to avoid heavily populated areas where possible along with extra security and safety staff.

The Carrying of nuclear warheads and their fissile components was done in the US by the “white train”  to and from nuclear bases all over the United States to the Pantex plant where they were built in Amarillo, Texas from 1951 to 1987. So-called because it was originally painted all white, it had an armoured construction and had armed guards on board but the train began to attract the attention from anti-nuclear protestors in the 80s and even though it was painted other colours to make it less obvious it was still a target for protesters.

In the late 1980s as the cold war died down these nuclear consignments were moved to the roads with armed convoys often accompanied by helicopter support, some are also flown by air with specially chosen multiple engine aircraft that have enhanced maintenance and safety checks.

Like in the US, here in the UK nuclear weapons are constantly being refurbished, the ones under UK control being Trident submarine-based missiles which are shuttled from the Atomic Weapons Establishment in Berkshire to their submarine bases in Scotland.

Similar high-security convoys are employed but because the UK is a small island compared to the US and  the submarine bases are at Faslane and the warheads are stored at Coulport on Loch Long 12km away, their route often passes near large areas of population like Glasgow.

If the warhead exploded but did not detonate then there is the risk of plutonium oxide being dispersed into the air. But the report said that the current chances of this happening on a yearly basis are 2.4 in a billion.

Due to the fear of a terrorist attack, the details about the vehicles in the convoy such as their gross weights are restricted because as it was alleged that it had crossed a weak bridge and if terrorists knew this it could help them plan an attack.

In the past 35 years in the UK, there have been over 14,000 shipments involving over 9000 tonnes of  spent nuclear fuel from all around the world to and from the Sellafield reprocessing plant without any radiological release.

In the US from the time the white train first started operating in 1951 up until now, there had been no radiation releases from military or civilian nuclear transports, much like there has never been an accidental nuclear donation and hopefully long may it remain that way.