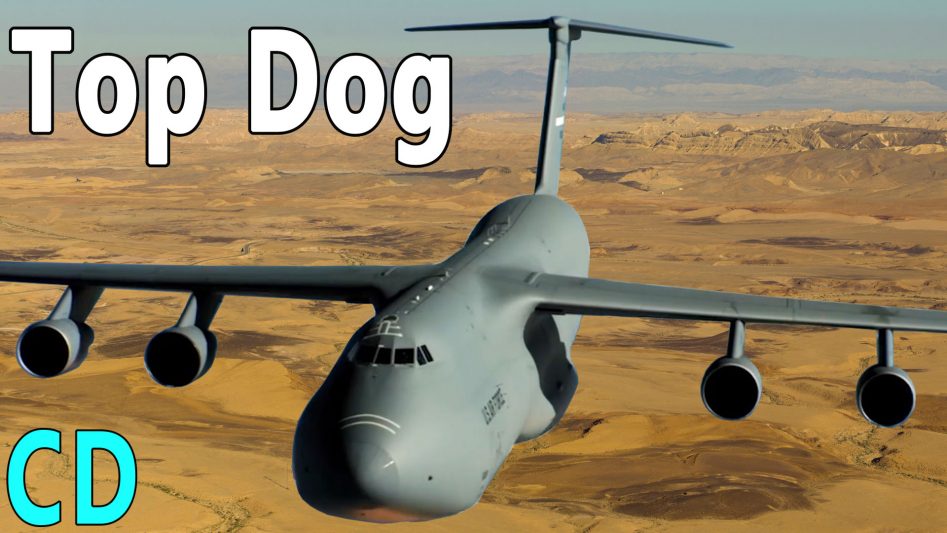 It’s been the heavyweight workhorse of the United States airforce since 1970, moving everything from emergency food relief to main battle tanks and even other aircraft and pretty much everything else in between. It’s also the only ever plane to carry and launch a full-sized intercontinental ballistic missile in the air.

Even at 50 years old there is no plane as far as we know to replace the Lockheed C-5 Galaxy in the near future but after a 17-year modernisation program and even bringing back mothballed ones, the C-5’s are expected to be in service until at least the 2040s, this is the story so far of the biggest plane in the USAF.

Todays video is sponsored by Fasthosts, now if your in the UK, Fasthosts are you giving the chance to win  an amazing tech bundle including a your ultimate PC setup worth up to £5000, the link in the description and I’ll tell you more later.

Like the B-52, the Lockheed C-5 Galaxy has been in every major US conflict from Vietnam up to the present day. It’s the largest transport aircraft in the USAF and although its not the biggest transport plane in the world, that accolade now goes to the singular Antonvo AN-225 Mriya, what it does offer is a fleet of aircraft with a range of up to 13,000 km unloaded.

Although when fully loaded with up to 127 tons of cargo, the range drops to 4260 km, because it can be refuelled in the air, it’s real range, loaded or unloaded is only limited to the time the engines can be kept running continuously and the multiple crews onboard can be fed, watered and rested during the flight.

The beginnings of the C5 go back to 1961 when the next-generation replacement for the Douglas C-133 and Lockheed starlifters was being looked at by several companies.

What was needed was a bigger aircraft for a variety of outsized equipment the military was now using but also they needed to be able to move it to anywhere in the world quickly. This would need not only a radical design for the airframe but also engines had to be big enough and powerful enough to do the job.

In 1964 an official proposal for the “Heavy Logistics System” or the CX-HLS when out to the top aircraft makers in the US.  From this Boeing, Lockheed and Douglas were given a 1-year study contract to come up with an aircraft and General Electric & Pratt & Whitney the same for the engines.

All the designs from the three companies had swept-back wings and placed the cockpit at the top of the fuselage, with Boeing and Douglas having it in pod while Lockheed extended it to the entire length of the fuselage, giving their design an egg-shaped cross-section. They also had front and rear cargo doors to allow simultaneous loading and unloading.

Although the airforce thought the Boeing design was the best, the lowest total cost solution at the time was the Lockheed one, so in the end, they were selected to build 81 C-5A’s which were delivered between 1969 and 1973.

The program also produced the General Electric T-39, the first high-bypass turbofan engine which was not only much more powerful than any previous engine, it was also much more efficient and led the way for future engine designs that would power the very large commercial jets like the Boeing 747 in the future.

Due to their unique high bypass design at the time and their priority on power rather than noise, this  gave the T-39 and the C-5 a rather loud and characteristic engine whine compared to more modern engines and those fitted to the latest C-5M.

Although Boeing lost the contract their design wasn’t wasted. Even before the competition had finished they were asked by the president of PAM-AM to build a super large passenger plane to replace Boeing 707, so a lot of the ideas from the CX design would go on to form the basis of the Boeing 747.

In the long run, Boeing would go on to become the world’s biggest aircraft maker and make far more money off of the back of the 747, producing over 1550 over the next 50 years compared to the 131 Lockheed C-5s.

But if Boeing did well out of NOT winning, Lockheed had more mixed fortunes, with the C-5 becoming the first development program to have an overrun of $1 billion.

There were also problems with the wings with cracks been detected during fatigue testing. By the 1980s non-emergency loads on the C-5A had to be reduced to no more than 23 tons out of the 127 total capacity and a $1.5 billion repair program called “H-mod” to replace the wings was initiated which doubled the total cost of the program.

In 1975, the airforce admitted that the military cargo version of the Boeing 747 had a bigger load capacity than the C-5 but that on the other hand, the 747 couldn’t carry oversized essential wartime items including the U‐21 aeroplane, A 20‐ton crane, an M‐22 crane, a rock crusher/screen machine and a ditch machine.

Some at the pentagon argued that for the $1.5 billion repair cost to fix the C-5 they could buy thirty Boeing 747 cargo planes which had no underlying issues and were proven in commercial use.

Even so, in 1982, 50 more C-5Bs were ordered with upgrades and modifications to make it more reliable and easier to maintain.

Two of those C-5Bs were converted C-5Cs for large cargo like satellites and other space-related items starting in 1998 and to be used by the DoD and NASA.

After a study in the early 2000s showed that the C-5 airframe still had 80% of its service life left, the remaining one C-5A, 49 C-5Bs and the two C-5Cs were converted to the C-5M Super Galaxy with new GE  CF-6 engines and mounting pylons, avionics,  airframe and skin, landing gear, cockpit and pressurisation systems.

This would give the C-5M better range, shorter take-off abilities and be more efficient with lower operating and lifecycle costs. The conversion program started in 2006 and ended in 2018.

With it’s lifting nose, nicknamed the Knights Visor and height controlled steerable landing gear with 28 wheels, the C-5 can not only land on unprepared runways, once there it can be lowered to be the height of a truck bed making easy to both load and unload cargo at the same time, effectively making it a drive through-loading system.

But it’s not only cargo it can carry, it also has a passenger compartment which can hold up to 80 in rear-facing seats which are considered safer in the event of a crash.

Although the C-5 Galaxy was designed to carry most of the things an army needs to fight a war, in 1974 it was suggested that it could be used to launch a Minuteman ICBM, something which is normally stored and launched from an underground silo.

The thinking was that is the Soviets initiated a first strike on the US many of the missile silos could be destroyed before they could launch. However, if you could carry and launch them from a plane, they would be virtually untraceable compared to a fixed silo site.

So, in October 1974 a 39 ton, 17-meter long Minuteman missile without its nuclear warhead was loaded on a C5-A and flown to 20,000ft. Here the rear doors were opened and the missile in its holding sled was pushed out of the aircraft, an operation that the crew described as being like dumping a wheelbarrow full of water. It was dangerous due to the sudden drop in weight and change in the aircraft’s centre of gravity and also if it got caught up on the way out.

The parachutes opened and brought the missile to the vertical position, the explosive bolts released the sled and when it was clear and missiles position had stabilised, the launch motors were fired and it flew up just as it would have done if it had been launched from the ground.

Although the test proved it could be done, the idea was dropped due to engineering and security difficulties and though it was never officially recognised, many believe this was used as a bargaining tool in the Strategic Arms Limitation Talks or SALT II between the US and soviets.

That particular test aircraft, complete with its number 90014, known as “zero-one-four” and its original paint scheme is the only C-5 to have been retired to a museum and is now at the Air Mobility Command Museum at Dover Air Force Base near Delaware.

The C-5 has also been used on other unusual missions including the ferrying around of partially dismantled versions of the then-secret F-117 nighthawk, the worlds first operational stealth aircraft when it was being developed. The C-5 was big enough to do this in secrecy leaving no external clue as to what they were carrying.

The C-5 was a candidate to carry the space shuttle too but was dropped in favour of the Boeing 747 because is its low wing design and also the C-5 would have remained the property of the USAF but the Boeings could be bought outright and owned by NASA.

Although the C-5 was originally designed as a military cargo plane, there were plans drawn up in 1968 to develop it into a commercial passenger and cargo plane much like how the Boeing 747 ended up.

The L-500 passenger plane would have in theory been able to carry up 1000 people, though the cargo version was probably the more realistic of the two. There was interest from some carriers but in the end, no orders were received due to the high operating costs caused by low fuel efficiencies even before the oil crisis of the 1970s.

With its ability to transport oversized loads on short unprepared runways anywhere on the planet, even to the US McMurdo Station in Antarctica, and with new modernisation efforts in its communications, mission computing and air traffic management to meet FAA regulations, the C-5M Super Galaxy is set to continue in active service well into the 2040s and if the example of the B-52s are anything to go by, it could end up being even longer, so maybe after a tricky start, it won’t have turned too bad after all.

Our sponsor for this video, Fasthosts are also big in internet world providing services from domain names, web hosting to email hosting and cloud backup.

Now you maybe wondering why you need a domain name even if you don’t have a website, well you can still use it as part of your email address, I could have something like joe bloggs @ curious driod.com instead of the more generic joe bloggs @ gmail or yahoo, it just looks peronal and more professional.

They also offer cloud backup service for almost any type of portable device with the backups only limited by the total amount of data you require. So if you have fleet of laptops, mobile phones or computers you can save all their data and then recover it in minutes where ever you are, vital now many more people are working from home.

And so on the to the competition. If you’re in the UK you have a chance your ultimate PC bundle customed to just what you need if you can answer my techie test question which was

“What other famous plane came out of the competition to build the C5?”

If you’re stuck the answer is in the video, just click on the link in the description or enter the URL now showing to go to the competition and good luck.