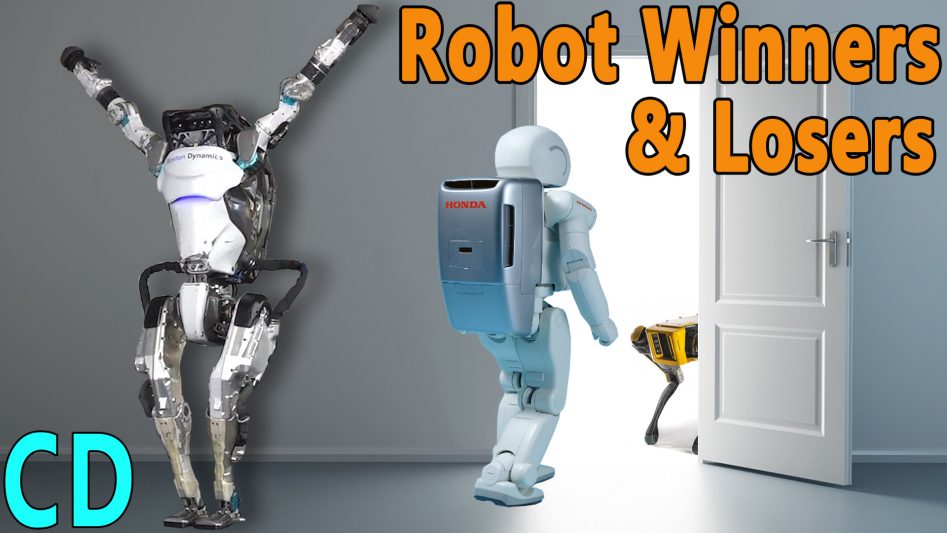 Just over four and half years ago, in what was my 8th video I looked at five of the most advanced robots at the time namely Asimo, Atlas, spot, cheetah and Pepper but just as a week is a long time in politics,  four and a half years in the tech world feels like an eternity so what has happened to some of these robots and are we any closer to seeing this type of legged robot out and about in the world in general.

The first of the famous five and the probably the most famous of them all is ASIMO by being the first to look like, move like and interact with its biological makers.

ASIMO was created by the Honda company in Japan and was quite a step-change for the company more commonly known as a car and motorcycle maker but Honda has not been afraid to diversify into different sectors and the roots of ASIMO go back to the 1980s with Hondas stated aim at the time to make a walking robot. The initial result was the E series which from 1986 to 93 would create an increasing sophisticated series of walking robots, though at the time they looked a pair of legs with a giant toaster grafted on the top.

But this was just a means to an end and by 1993 the E6 could autonomously balance, walk over obstacles, and even climb stairs.

The following P series looked more like a humanoid with a torso, arms and legs and by using wireless control could perform completely independently. This eventually led in 2000 to ASIMO or Advanced Step in Innovative Mobility. The name ASIMO is also is a nod to the writer and professor Isaac Asimov and his Three Laws of Robotics.

ASIMO became a robotic icon travelling the world and showcasing japans advances in robotics up until 2017 when Honda announced that they were pulling the plug on the original dancing robot.

So why when research into legged humanoid robots is becoming more widespread did Honda pull out. Well, it seems that after 35 years of research and leading the field for decades, Honda couldn’t see a payday for their humanoid robot.

Maybe they know something that the others and the new start up’s which have sprouted in the past 4 years or so don’t but the tech isn’t going to be stuffed in a cupboard and forgotten.

Honda has said that they will be using the underlying tech in new products and in their car and motorcycles with things like a self-balancing motorcycle, sensors and AI for self-driving cars even down to robotic lawnmowers. They won’t be pulling out of robotics altogether, but It seems there will be more money in producing these sub-systems and other things on-mass compared to humanoid robots like ASIMO, at least for the foreseeable future.

While ASIMO has been consigned to the parts bin of history, Atlas, Boston Dynamics take on the Humanoid robot which has been seen doing parkour-style running and jumping but more recently has taken the dancing robot theme to a new level with the “do you love me” video released by Boston dynamics.

Now it seems that as soon as this was released half the comments referred it to as being the thin end of the wedge and that the next dance moves would the one used by the robots to dance on our graves as Skynet take over.

Now, It might seem like Altas has gained some super robotic ability to dance much better and more like a human compared to ASIMO’s previous dad dancing attempts. But this has not been gained by Altas watching a human dancer and using some Skynet style AI to copy their best moves. No this is nothing more a dancing toaster, albeit a very good dancing toaster.

Now what I mean is that this is not a result of a learned routine thru AI but a lot of what is effectively keyframing, a process similar to how animated characters in films and game are made to move. However, looking at the smoothness of the moves I suspect that this was created from MOCAP data or Motion Capture.

Motion Capture is used in the film and games industry and usually involves an actor or dancer wearing a black bodysuit with white or coloured ping pong balls attached at specific points. A computer then tracks the movement of the balls and maps them to a virtual skeleton. This can then be used to control a virtual character or if the hardware is sophisticated enough, a robot like Atlas.

This makes it much easier to create very realistic looking movement without having to create hand code each keyframe and if it was hand keyframed the guys who did it should get a raise or work in Hollywood.

Altas still has its core stability systems which it uses to balance and move just like we stand, walk and move without thinking about it, the dance moves would just work as an extra layer on top, a bit like if a human dancer were to have a neural implant to download a new dance moves without having to learn them.

All of this just goes to show how well developed Atlas’s hardware and software control have become and no doubt many will be thinking when that DARPA funded research will find its way into robotic soldiers which would be on the top of the militaries list complete with the ability to pull off a cool dance on the enemies grave when they have finished.

Something which has also changed in the last 4+ years is the ownership of Boston Dynamics which started as an offshoot of MIT or the Massachusetts Institute of Technology. Back in 2016, it was owned by Goole X who then sold it to the Japans Softbank in 2017 the same people that make the Pepper social robot.

Well, as of December 2020 Hyundai Motor group bought an 80% stake in the company, so as one motor company bows out of legged robots, another buys its way in.

Our next robot, the Cheetah 2 was last seen in 2015 autonomously jumping over objects as it ran and using a laser vision system to see the objects and then work out how to jump over them. Its predecessor the Cheetah, was recorded running at 28.5 mph or 45.8 km/h on a treadmill which still the speed record for a legged robot.

Since then MIT has produced the Cheetah 3 which can now leap and gallop across rough terrain, it can climb stairs covered with loose debris and recover from an external shove or push but this time it does it without a vision or sensor system using “blind locomotion” similar to the way in which you feel way across a room in the pitch black.

The idea is to develop systems that can work where vision might not be possible so this could be integrated into a visual robot that might use cameras to see doors or walls but if it entered an unlit room or an area where high levels radiation made its camera systems too noisy to use it could still proceed.

Along with Cheetah 3, MIT has also shown the mini cheetah, a small agile four-legged robot that can run, jump and do things like backflips.  But apart from the party tricks, it’s designed to let researchers develop new controllers and sensors without the fear of breaking the robot when things don’t go to plan. The group of mini cheetahs here are being remotely controlled by the MIT researchers and are not using any AI to play with the football or to do the synchronised movements and interactions. It also shows off things like the reversible knee joints allow it to recover from any position.

Back to Boston dynamics and their small four-legged robot called Spot. This has also had a major update and is also available to buy, if you have about $75,000 spare. Spot also appeared in the Atlas dancing robots video doing its funky moves but again this is not AI, those were created by the Boston Dynamics’ Choreographer software but it comes with a warning this is at the owner’s risk and it will fall down a lot until you have perfected the routines.

But Spot has competition from both from China and the US. The Chinese company Unitree robotics have 3 models, the A1, Aliengo and Laikago based very much on the Spot as the company founder has stated he is a big fan of Boston dynamics but these start at $10,000 so they are much affordable for companies and enthusiast a like.

This seems to be the major selling point and something that two-legged robots still struggle with. These small 4 legged versions can go places where men would struggle or would be too dangerous be that from nuclear, chemical or biological threats.

For two-legged robots the biggest competitor is from humans, we can still outmanoeuvre and outlast even the best robots like Atlas, it’s battery run time is about 75 minutes and people are much cheaper to hire.

This is where we can start to see why Honda pulled the plug on ASIMO, apart from very specific jobs in dangerous or highly specialised locations where humans can’t go, in also every other situation men can still do a better job than two-legged robots and will do so for a long time to come.

In the Mars exploration missions, the Mars rover scientists have said that a man could do in a few minutes what a Mars rover would take a day or more to do but getting a rover to Mars is far, far easier than getting men there and then back again.

And so we come the last of our robot five with the Softbank Pepper robot and here we don’t see the emphasis on trying to move around like human on legs but more about connecting on an emotional level to people like another person might do, being a personal companion, a greeter, an educator.

As a commercial product is has been quite successful at about $2000 for an entry-level unit.

The non-threatening look, puppy dog eyes and outgoing personality draw people and especially children in and in no time they are talking to it just like they would to another person.

If anything this is where I think will see the most widespread use of future robotic AI. They are already used as companions for old people when there are no real people around and although it might seem a cheap trick to many of the people who use them, they would prefer this to nothing at all. With the increasing capabilities of AI in the near future this type of personal robot would easily past the Turing test, that is to be indistinguishable in communications from that of a real human in a blind test.