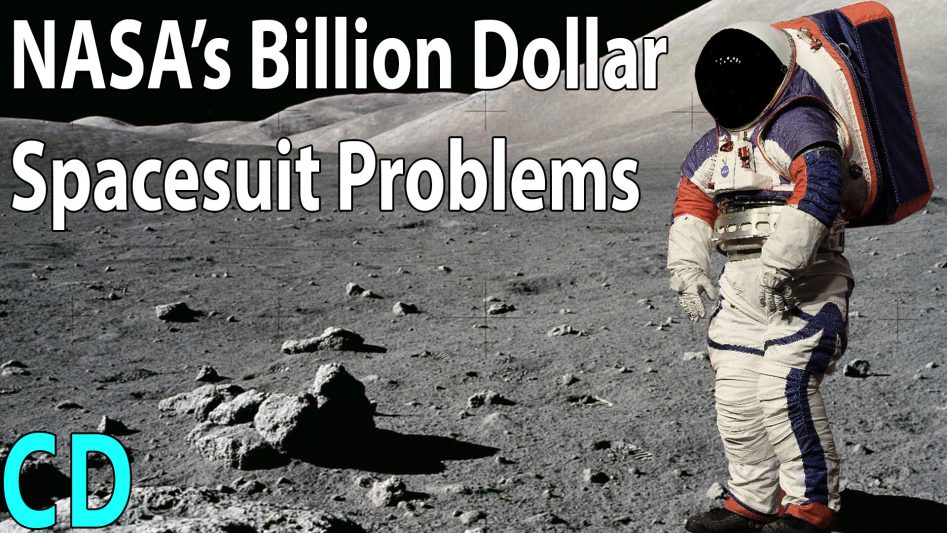 They are as important as the rockets the astronauts fly in and a miracle of materials and clothing engineering. Without them, we would not have been able to walk on the moon but the current generation of spacesuit’s or Extravehicular Mobility Units which were designed in the late 1970s are now 25 years beyond their design brief.

NASA has spent the last 14 years and by the time it’s ready, getting on for over a Billion dollars on the latest version of their next-generation spacesuits and yet they still won’t be ready for the Artemis manned moon missions when they start in 2024 which threatens to derail the whole project not to mention the problem with the ISS spacesuits.

So why has is it taken so long to replace a spacesuit that is 45 years old.

Although the term space suit is most commonly used, the one’s we saw used performing EVA’s around the ISS and on the moon are actually Extravehicular Mobility Units or EMU’s. These are effectively personal spacecraft designed to keep the occupant alive outside in the vacuum of space where they would normally be in a conventional spacecraft.

To do this and still retain the ability to move around and work in space is for up to 8 hours is actually a pretty tall order. There is a whole range of things that the EMU must do to keep its occupant not only alive but also comfortable enough to allow them to perform complex jobs for extended periods.

Before Apollo, spacewalks were done with spacesuits that were attached to the spacecraft by an umbilical cord. With the moon missions that would not be possible if they were to explore more than a few meters from the lunar lander.

To enable this, new much tougher and more flexible spacesuits for the lunar surface would be required and a portable life support system or PLSS would be built into a backpack and carried by each astronaut and this is where the transition from a spacesuit to the EMU began.

On the Apollo missions up to Apollo 14, this was the A7L and Apollo 15, 16 and 17 was the extensively revised A7LB which were used on the longer J series missions. They were also used on the Skylab missions but with an umbilical system called the Astronaut Life Support Assembly.

Two companies made the EMU, ILC made the spacesuit and Hamilton standard the PLSS.

This PLSS backpack would supply all the oxygen to breathe and electrical power to maintain a constant pressure in the vacuum of space and to remove expelled carbon dioxide with a rebreathing system so the oxygen breathed out could the reused and not lost.

The EMU’s also provided communications equipment and liquids maintained a constant temperature in the suit even though the exterior could be subjected to temperature swings from -156C in the shade to 121C in direct sunlight.

The spacesuit had 11 layers of insulation and protection split it into three parts, even in space the biggest problem became keeping the person cool inside the suit. This was done by a three-layer liquid cooling and ventilation undergarment which had over a hundred meters of fine tubing built-in which covered the body and which water was pumped through, this also cut down the sweating and subsequent fogging of the suit helmet visor.

Temperature control was done with a porous sublimation plate that the water from the cooling and ventilation garment ran over on one side, while the other was exposed to the vacuum of space outside.

The plate had pores sized just so that if water flowing under the plate became warmer than a comfortable level, the frozen water in the plate would thaw allowing the water to boil off in the vacuum of space taking the heat with it. As the water temperature dropped, the water refroze stopping the cooling process. This automatic temperature control system was simple yet effective and worked without sensors, electronics or any moving parts involved

The second part was a flexible pressure suit that would hold its shape even when pressurised in a vacuum.

The pressure suit also had to keep a constant volume independent of what movements are performed. This is to keep the amount of effort required to do any movement to an absolute minimum. If you’ve ever worn a stiff pair of gloves that naturally keep the hand straight, then done any kind of intricate work where you have to bend the fingers for long periods, you’ll know that the extra effort to overcome the glove stiffness can become fatiguing very quickly. The same can happen if the entire suite is similarly stiff making it difficult to work for longer periods.

The third part was a protection layer made from a material called beta-cloth. This was made from Teflon coated woven fibreglass that protected up to 650C, well beyond that of the wide temperature swings the suits would be exposed to as well as high levels of ultraviolet light and some particle radiation.

This outer later also protected again micrometeor impacts at up to 27,000km/h, something was a particular issue for later EMUs when working outside the ISS.

The gloves were the most difficult to make as they had to be flexible enough to pick up a coin and tough enough to stop a bullet. In the end the outsides were made from a new material called Chromel-R which is woven chromium steel which at the time cost $2000 per meter and was difficult to work with but it worked well.

On areas of the spacesuit that were exposed to the lunar environment like the knees, elbows etc chromel R was also used.

The spacesuit also had to handle the waste products both liquids and solids that the astronaut might produce. In the Apollo era they used attachments that were stuck to the body under a pair of spandex trunks. In the later 1978 design version which still today, they use a Maximum Absorbency Garment, basically, an adult nappy, though in both cases the astronauts go to the loo before they start an EVA and in suit drinking liquids are there for comfort rather than necessity, thus they can minimise the amount they need to excrete while in the EMU.

With the advent of the space shuttle, in 1978 a new baseline EMU was developed which has remained similar up until today and is used on the ISS by the US crews, the Russian crews use their own design.

This 1978 design had an expected lifespan of 15 years but has now been in use for over 40 years. As the ISS has been given more time,  the costs of looking after the ageing EMU design are mounting and it now poses other more serious issues with reliability due to the loss of component suppliers and the lack of critical components.

The Primary life support system or backpack is the most complicated and expensive part of the spacesuit and currently costs $150M a year to maintain the 11 serviceable units used to support the ISS.

But there are other more serious issues with decompression sickness, thermal regulation, shoulder and hand injure’s to name a few. The Aerospace Safety Advisory Panel has recommended that NASA transition to newer xEMUs as soon as possible as the old suits are now too risky for the astronauts to use.

The development of the EMUs has been over decades by several different external contractors but with  the new push into space and to the moon by NASA, there is the need to make an xEMU system that would work in a modern digitally connected way, be more flexible and inclusive of a greater range of body types both male and female as well address the existing problems with the 1978 design and design issues carried over from the Apollo era.

It would also need work over a wider range of systems including the Human Lander system or HLS for the Artemis program, the Gateway program, the Orion capsule and of course the ISS, a quick comparison of the old EMU and the new xEMU can be seen here.

NASA started work some 14 years ago investing $420M so far in spacesuit development but in 2017 NASA decided that it would design, test and build the all new xEMU’s in house for the first time in 40 years working with 27 different contractors.

However, whilst NASA is working on its spacesuit, it provided access to the designs to the contractors but does not require them to use the designs. So we could have a scenario were there would be two different designs which NASA would end up purchasing, one for the Lunar missions and another for the ISS, pushing up the costs and creating further delays considering the limited life span that ISS has.

There was a 12-month margin built into the xEMU schedule but with the still-unfolding Covid-19 issues, budget cuts and technical issues have now introduced approximately 20 months of delay into the schedule meaning that they are now about 8 months behind.

Before they can be used on the ISS or the Artemis program, the new xEMUs will be required for crew training for at least 12 months and normally two years before they are deployed.

With these delays it’s now looking like the first two flight-ready xEMUs won’t be ready until 2024. The bringing forward of the Artemis program also to 2024, the ageing ISS spacesuit issues and other issues which are of NASA’s own creation has created a perfect storm which means that the late 2024 Lunar landings will not be possible and the costs for design, testing and qualification of the spacesuits is expected to be over $1 Billion.

These are not to only issues that the return to the moon poses, the lander system is still in its early design phase and the are still issues to work out with the SLS and Orion capsule but the xEMUs are the common link across all the space programs and as such they are now the Achilles heel for the American manned space program.

If your interested in finding out more about the ongoing development of the NASA next gen space suits there is a new report from office of audits, the link is in the description which makes for some interesting but also rather depressing reading.

So I hope you enjoyed the video and if you did then please thumbs up, subscribe, click the bell notification and share and I would also like to thank all our patreons for their ongoing support.