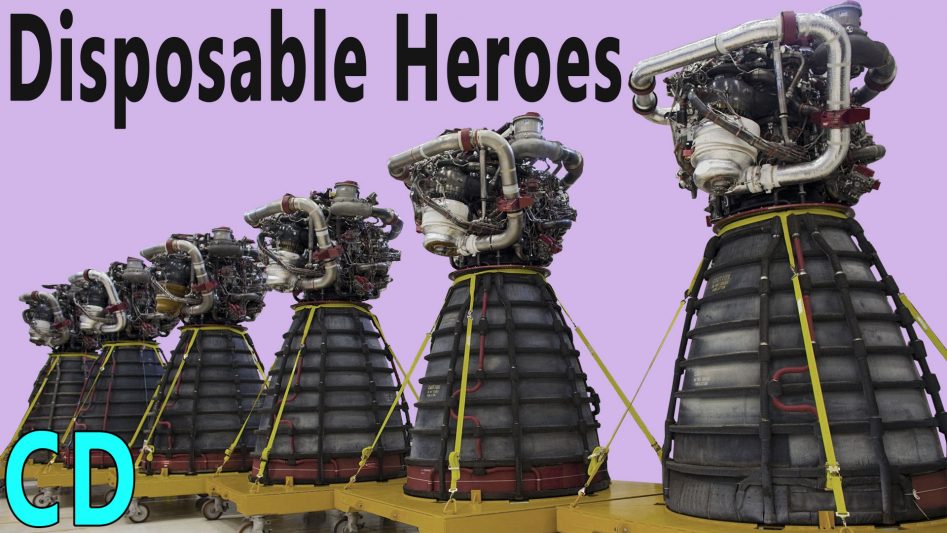 Artimis 1 finally took off for the moon on 16th November 2022 but this new rocket which is the most powerful to make it into space is not as new as you would think.

The four main engines that power the core stage with the help of two massive solid rocket boosters are the same engines which powered a variety of space shuttles over the last 24 years and the large orange tank is a modified shuttle main fuel tank making it the essence of reusability.

Yet for all the advancements that other space programs like SpaceX and Blue Origin have made over the last decade in making the expensive hardware reusable, these engines and the fuel tank will be on their final journey and like their F-1 predecessors on the Apollo Saturn they will end up at the bottom of the ocean, which does seem like a retrograde step for the lastest rocket from NASA.

So in this video, we’ll look at how the first reusable large liquid rocket engine, the RS-25 came about and how it ended up as a disposable item.

The Aerojet Rocketdyne RS-25 also known as the Space Shuttle Main Engine or SSME can trace its history back to the 1960s, firstly with the development of the Rocketdyne J-2 engine which powered the second and third stages of the Saturn rocket and secondly to Project Isinglass.

The 1967 Project Isinglass was for two classified crewed reconnaissance aircraft which was studied by the CIA as a possible replacement for the Lockheed A-12 and SR-71 that would fly at up to MACH 5.

However, with an eye on what happened to Francis Gray Powers U2 when it was shot down over the soviet union in 1960, this was considered an insufficient advancement over existing aircraft and still susceptible to soviet air defences, so a second much more advanced Project Rheinberry was created.

This would be a rocket-powered glide aircraft launched over the Atlantic from a B-52 at a high altitude which would then climb to 200,000 ft flying at MACH 20 over the Soviet Union, so high that it would well out of the range of air defences before gliding back to earth and landing at Groom lake, Nevada.

At the end of the study, Pratt & Whitney put forward the XLR-129. This had 250,000 lbs of thrust and two unique features, firstly it was designed to be reusable and second it had a de Laval two-position expanding nozzle that was more efficient over a wider range of altitudes than single nozzle rockets. It also was throttlable with staged combustion and ran at high pressure, the same attributes that would be required for the later Shuttle engines.

However, the cost of Project Isinglass and Rheinberry was beyond the budget of the CIA, being the equivalent of $22 billion in today’s money. The other issue was that because of its speed, altitude and flight path it was realized that it would look like an incoming ICBM to the soviets and could potentially start a war it was there to prevent, so the project was dropped.

Although the XLR-129 carried on it was never built but it did receive component-level tests which made up the basis of the Pratt & Whitney failed space shuttle main engine bid.

In 1969 when the contracts were awarded for the space shuttle development and the initial Phase A studies, Pratt & Whitney, Rocketdyne and Aerojet General worked on upgraded versions of the XLR-129 with a minimum thrust of 415,000 lbs, this design can be found on many of the shuttle designs up to until the final decision in 1970.

However, NASA wanted to force the advancement of rocket engine technology in every way. To do this they specified it should have a traditional bell-shaped nozzle to rule out aero spike designs and to have a high-pressure combustion chamber running at least 3000 psi. It would also have throttlable staged combustion with de Laval-type nozzle type.

This would be the 1970 Phase B competition between the three contractors.

Pratt & Whitney was already ahead of the game with their XLR-129 and Aerojet had experience in designing and component testing the 1.5 Million lbs thrust M-1 engine which would have been bigger than the F-1, so Rocketdyne had to spend a lot of money catching up on their development of the J-2 engine into the H-3 which be the basis of the SSME.

To achieve the 3000+ psi combustion chamber pressures, Rocketdyne developed the copper-zirconium alloy called NARloy-Z and in 1971 were awarded the contract to build the shuttle engines but were immediately held up by a legal challenge from Pratt & Whitney who believed they had a superior engine.

After Pratt & Whitney lost the challenge, their engineers were told to destroy the test data so as not to embarrass NASA at some future point if things had gone badly for the Rocketdyne design that would become the RS-25.

By the time the engine contract was awarded, budget pressures had forced the design of the shuttle to use a single orbiter with an external fuel tank and solid rocket boosters that we know today.

Now there would be just 3 main engines on the orbiter and the solid rocket boosters would do most of the heavy lifting and a detachable main fuel tank that would hold the fuel for the SSME’s until it reached orbit. The SSME could be optimised just for the orbiter and the thrust level was lowered to 470,000 lbs.

One of the features of the staged combustion for the new engine was that exhaust from the high-pressure turbopumps was fed back into the main engine burner instead of dumped overboard as low-pressure turbo exhaust as in previous large liquid rocket engines like the F-1 engines. This would make them more efficient by using all the available propellants but at a significant cost in system pressures.

It was the high combustion chamber pressure combined with the amplification effect of the staged combustion cycle that made this engine a quantum leap in rocket engine technology but also created a significant challenge to Rocketdyne and the government team charged with its design and development.

The original shuttle and fly-back booster design life called for 100 missions and 27,000 seconds including 6 exposures to an Emergency Power Level of 109%.

With the redesign of the shuttle, 27,000 seconds was the equivalent of 55 missions. After a fatigue analysis concluded that if the total number of missions were reduced to 55, then no limit need be placed on the number of exposures at 109 % of power.

And so the stage was set to build the RS-25 with tests being carried out throughout the 1970s. there were a lot of areas that were beyond any previous engine design and needed extensive testing before it could be flown on the Space Shuttle.

Over the time there have been number upgrades to increase reliability, reduce maintenance and increase power.

The RS-25 was broken up into several versions over the years with the original RS-25, then the RS-25 A, B, C and finally D which could be run upto 111% full power level.

The RS-25D is the first of the Block II engines and to be used for the Artemis 1 launch in November 2022 and will ones used for future launches until they run out.

A total of 46 reusable RS-25 engines, each costing around US$40 million, were flown during the Space Shuttle program, with Pratt & Whitney Rocketdyne reporting a 99.95% reliability rate with only 1 inflight failure on STS-51F in 1985 caused by multiple sensor failures leading to the shutdown of the engine and an Abort To Orbit emergency procedure though the mission continued.

As the announcement of the Shuttle’s retirement came in January 2004 it was thought the remaining engines might be either given or sold off to institutions and universities around the world or kept by NASA.

When the Space Shuttle was retired in 2011 and the SLS was announced NASA stated that the RS-25 would be used for the rockets core stage using from 3 to 5 of them depending on the mission.

The US congress made it part of the SLS funding request that as much of the Shuttle technology as possible should be used on the SLS which included the RS-25s, the main propulsion systems, the shuttle main tank, modified and used as the main storage for the SLS and the Orbital Maneuvering System Engine be used to power the Orion capsule.

In all, 118 different astronauts previously flew on the now four Artemis I engines from 1998 to 2011 with engine number 2045 completing 12 missions, 2058 six missions, 2056 four missions and 2060 three missions, all well below the 55 missions which were factored in for the working life of the engine.

So when all the usable RS-25D’s have been used up what will happen then?

Well, they will make more RS-25s, in 2020 NASA awarded a contract to build another 18 for $1.79b but this time they will be RS-25E’s based on a 2005 study into a single-use variant and then an even more simplified and cheaper to make a version which is currently under development by Aerojet Rocketdyne called the RS-25F.

So with the SLS program, we will have come full circle from the disposable Saturns and the F-1 engines of Apollo in the 1960s, through the reusable shuttles and RS-25s in the 80s, 90s and 2000s and back to the disposable SLS and disposable versions of the RS-25 in the 2030s, all whilst others are pushing for maximum reusability, make of that what you will let me know what you think in the comments.

So I hope you enjoyed the video and if you did then please thumbs up, share and subscribe and thanks go to all our patreons for their ongoing support.