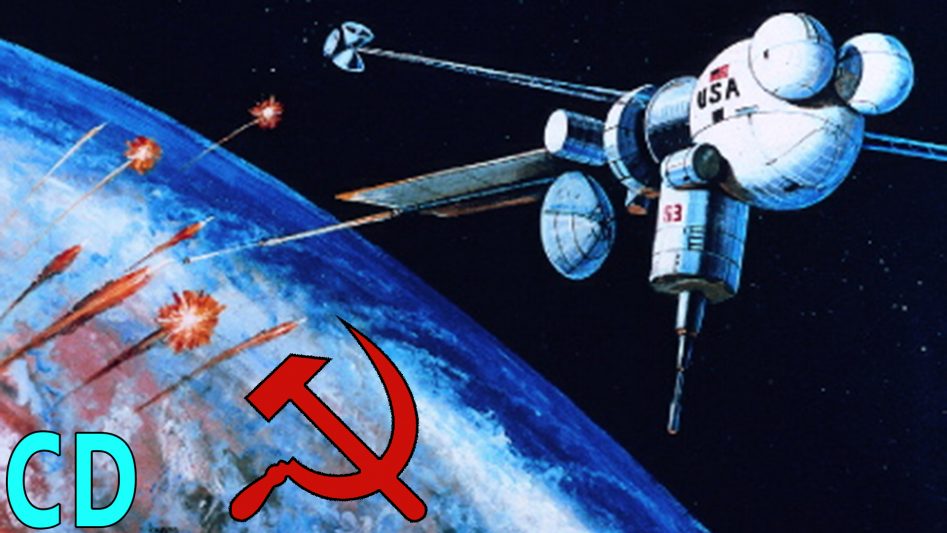 In the 1980’s science fact and science fiction looked as if they might become one when the American President Ronald Reagan announced the ‘Strategic Defence Initiative’ or ‘Star Wars’ missile defence system. The program was designed to break the nuclear deadlock between the US and Soviets and move beyond the threat of M.A.D. or Mutual Assured Destruction.

But did the nuclear physicist Edward Teller over-sell the idea to Ronald Reagan and only tell him what he wanted to hear? Even as the world reacted to America’s new defence plan, Teller’s theories remained decades away from forming a working weapon. So how did just the threat of ‘Star Wars’ change the world without being put into action?

By 1980, both the USA and USSR had been stockpiling nuclear warheads for more than a quarter of a century: the Soviets having more than 30,000 and the US over 20,000.

The US stockpile had actually decreased since the mid-1960s, as new missiles were both more effective and versatile. Nevertheless, both superpowers were more than capable of obliterating each other many times over.

It was President Ronald Reagan’s dislike of the ‘M.A.D.’ policy, which he called a “suicide pact”, that drove him and his advisors to seek a new defence strategy. Their solution had to effectively remove the threat of total annihilation but also allow the holders of the technology to use their weapons without fear of a devastating counter-attack.

Reagan had been searching for a new way forward for decades. In 1967, before he was elected as Governor of California, he had attended a lecture at the Lawrence Livermore National Laboratory, in which the Hungarian-born scientist Edward Teller proposed using nuclear weapons to defend against a nuclear attack. Teller, known as the ‘Father of the hydrogen bomb’, was passionate about the capabilities of nuclear technology. His famous enthusiasm even made it onto the big screen as one of the sources for the ex-Nazi scientist character in Stanley Kubrick’s black comedy ‘Dr Strangelove’.

But it was Teller’s ideas for harnessing the power of nuclear explosions that would capture Reagan’s imagination, and plant the idea for the ‘Strategic Defence Initiative’.

During a visit to NORAD in 1979 Reagan was told that whilst the US could find and track individual missiles during an attack they could do nothing about it. Two years later, Reagan was elected as American President, and immediately set his advisors the task of devising a new defence concept. Initially, a proposal called ‘High Frontier’ suggested a combination of ground-based ABMs (or anti-ballistic missiles) and a space-based laser system to shoot down the incoming Soviet ICBMs.

But ‘High Frontier’ needed big advances in technology from a research project at the Lawrence Livermore National Laboratory. This project, codenamed ‘Excalibur’ aimed to channel a controlled nuclear detonation in low earth orbit, into a battery of expendable X-ray lasers. These lasers had to be powerful enough to destroy incoming missiles in mid-flight before their warheads separated. Although testing in the 1970s had been unsuccessful, on November 14th, 1980, scientists detonated a 2-kiloton nuclear device in a kilometre-deep underground shaft at the Nevada Test Site. ‘Project Excalibur’ scored a success: the X-ray laser showed promise.

In the meeting where ‘High Frontier’ was presented to Reagan, he reportedly ‘lit up’ with enthusiasm on hearing the details. Decades earlier the actor-turned-President had himself starred in a B-movie about an airborne laser weapon: the wartime film ‘Murder in the Air’.

On March 23rd, 1983, President Reagan appeared before the world on television to announce the launch of the ‘Strategic Defence Initiative’. His speech made clear that the program aimed to be a technological game-changer

The Soviet reaction was outrage and condemnation. According to the thinking that had led both sides to build up stockpiles of offensive weapons, defensive initiatives were destabilising, as they threatened to shatter the existing balance of power. Reagan admitted as much in the words of his speech: this was a bold move and a gamble.

The ‘Star Wars’ program was announced at a time when the USSR was already in turmoil at the top. Three Soviet leaders had died in less than three years: Leonid Brezhnev, Yuri Andropov and Konstantin Chernenko. On hearing of Chernenko’s death, Reagan reportedly remarked, “How am I supposed to get anyplace with the Russians if they keep dying on me?”

On March 11th, 1985, Mikhail Gorbachev became the Soviet leader: chosen as part of a new generation, keen to revive the stagnant economy. Once in office, Gorbachev filled his cabinet with political allies who, like him, were reformers.

The new administration inherited a raft of strained diplomatic situations, including a proxy war in Afghanistan, and the US redeployment of medium-range missiles across Europe in November 1983. Soviet representatives had walked out of arms control negotiations that year and only agreed to resume talks in 1984 if a treaty banning space weapons was on the agenda. Gorbachev came to the bargaining table at the Reykjavik, Iceland summit in 1986, with an offer to shrink the Soviet offensive nuclear arsenal in exchange for cancellation of the ‘Star Wars’ program. To avoid a new arms race and save his economy, Gorbachev had to neutralise America’s new technological initiative.

Even as he tried to negotiate an end to the arms race, at home the Soviet defence industry was milking the opportunity to pursue their most ambitious programmes. Priority was given to ‘Buran’, an equivalent to NASA’s Space Shuttle, and its launcher, the giant ‘Energia’ rocket. This launch system was conceived as a way to lift a range of weapons that could neutralise SDI satellites: such as the carbon-dioxide space laser ‘Skif’. Like ‘Buran’, ‘Skif’ was symbolically important, as it tested the idea that the USSR could offer a symmetric response to ‘Star Wars’. Energia’s first launch was scheduled to put ‘Skif’ into space on May 15th, 1987 as part of the ‘Polyus’ payload.

Polyus was officially a science mission, loaded with ten experiments to carry out in the upper atmosphere. Gorbachev himself visited the Baikonur Cosmodrome before the launch, to expressly forbid any deployment of the weapon that might be seen an act of aggression by US surveillance. However, in the end ‘Skif’ did even less than Gorbachev had expected: when Energia launched and released Polyus, a software error caused the payload to rotate too far. Facing backwards, Polyus fired its engines, slowing to fall and break up in the atmosphere shortly after.

Although the Soviet space laser never made it into a stable orbit, Reagan had successfully bluffed his opponent into developing and testing a symmetric response to a phantom threat. As ‘Polyus’ crashed to Earth, a major review of the American technology found that the space-borne X-ray laser still faced huge challenges, and remained out of reach.

However, by this time the US had already effectively outmanoeuvred the Soviet Union, forcing them into an arms race they could not win. While the American economy enjoyed strong growth through the mid and late-1980s, Soviet productivity fell further and further behind.

By 1989, the USSR was in a death spiral. Gorbachev’s reforms had resulted in a domino effect: the policy of ‘Glasnost’ or freedom of speech had led to public criticism of the fathers of the Communist party, destabilising the state’s legitimacy. Gorbachev’s announcement of non-intervention in Eastern Europe resulted in ‘Warsaw Pact’ countries holding democratic elections. Then in 1991, the Baltic states seceded from the Soviet Union. In December of that year, Gorbachev resigned and officially dissolved the USSR and the superpower that had kicked off the space race with Sputnik and launched the first man into orbit was finished.

Salyut 7 – The forgotten rescue of a dead space station

Asteroid Impact – Could we save the Earth in time ?