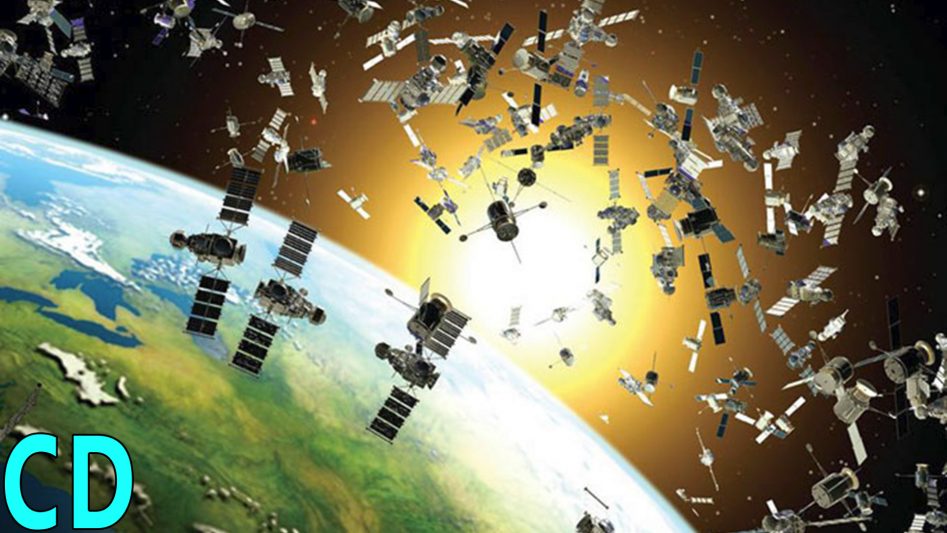 Space aint what it used to be, mainly because just like here on the earth, we are slowly filling the most important part just above us, with junk.

After sixty years of space travel, flight debris, or space junk, has accumulated around the Earth, to the point that it’s becoming dangerous.

With the amount of junk in orbit expected to triple within the next fifteen years, experts are beginning to take the problem very seriously indeed.

Because if they don’t, a theory known as the Kessler Syndrome suggests that the space around Earth could soon become so clogged up with junk, that no vehicle will be able to fly through it.

That means, No more missions to the moon or Mars. No more deep space probes. And, closer to home, and more importantly for the everyday people like you and me, no more satellite communications networks, weather satellites and research probes, live international news, stock price updates, flight information or GPS services. We could imprison ourselves on Earth, and make the world a lot smaller, and more difficult to navigate and understand, while we do it.

When space exploration began, there was no way of dealing with vehicles once they’d completed their jobs. So, they were just left there, floating around the Earth, of no further use to anyone. But as that pattern continued over the decades, more and more debris built up. And now it’s a real problem.

Objects from spacecraft to specks of dust stay in orbit because they are travelling at incredibly high speeds normally in the order of 17,000 mph about 27,000 km/h. That’s not so bad if they are all travelling in the same direction like cars on the same side of a highway.

But if the orbits are at different angles or directions, its like a car driving into oncoming traffic, the impact speeds are huge and so is the energy released when they collide.

A 10cm or 4-inch object has the impact energy of around 7kg of TNT.

The Space Surveillance Network is currently tracking more than 750,000 bits of junk, of which 16,000 are 10 centimetres in diameter or bigger, while most are between one and ten centimetres.

But there are thought to be more than a hundred and fifty million pieces smaller than a centimetre. Over around 5,000 vehicle launches since 1957, rocket flights have created clouds of aluminium dust from engines, nuclear-powered satellites have created droplets of coolant liquid, and radio experiments from the 1960s have left strands of copper wire floating around.

At the larger end of the scale, the junk includes defunct satellites, empty rocket stages, discarded shields and even lens caps. The oldest known item still in orbit is NASA’s Vanguard 1 satellite and its upper stage launch rocket, which was launched in 1958.

In 2002 an unidentified item was found to be a burnt-out launch stage from the Apollo 12 moon mission, launched in 1969. It was identified by the paint patterns on its exterior – and paint, which it turns out, is a significant issue in the space junk situation.

Flecks of paint become detached from dead vehicles as a result of extreme ultraviolet radiation. Although they’re tiny, they’re travelling at around five miles per second – and that means they can pack a punch if they hit anything. Several space shuttle windows needed replacing after being hit by what was later identified to be paint flecks. A solar array removed from the Hubble space telescope in 1993 showed hundreds of impact holes. Last year, a piece of micro-debris cut a hole in the solar panel of the Copernicus Sentinel 1A satellite. In May 2017, astronaut Tim Peake revealed how a paint fleck, just thousands of a millimetre in diameter, made a serious dent in the cupola window of the International Space Station.

The ISS can be moved out of position if an impact is predicted. NASA flight rules include guidelines for assessing the threat posed by space debris. They know that pieces of junk, moving at up to 17,500 miles an hour, pose a serious threat to vehicles and anyone aboard. An imaginary box, known as the pizza box because of its shape, is projected around the ISS and any other vehicle. It’s a mile deep, thirty miles wide and thirty miles long, and if any piece of space junk enters the pizza box area, NASA and its partners do what has to be done to protect the vehicle and its crew, if there are any.

There have actually been very few large-scale collisions to date. But for an idea of what happens when they do, consider this. In 2007, China tested an anti-satellite weapon by destroying a defunct probe with a rocket. That explosion created the largest breakup in space history adding 3,000 new trackable pieces of space junk around the planet. Two years later, in 2009, a dead Russian probe struck and destroyed an operating US commercial communications satellite, creating two thousand more tiny bits of debris.

The Kessler Syndrome, defined by Professor Don Kessler of NASA in 1978, predicts that those sorts of impacts will become more and more common, and create more and more tiny, non-trackable, bits of junk to clog up the space around Earth.

The theory goes that, as time goes by, large objects will smash into other large objects and break up into smaller ones. With so much junk for those smaller bits to hit, a chain reaction could be set off, that ends up with billions of tiny pieces, all too small to be tracked, making it impossible to leave Earth without encountering an impact. In essence, the Kessler Syndrome warns that we could lock ourselves into a world where we can’t send up satellites or rockets because there’s no way through the invisible junkyard.

So, what is being done? Government space agencies and corporate operators are working together in the Inter-Agency Space Debris Coordination Committee. They’ve developed guidelines about limiting space junk. The current thinking is that the problem of micro-debris can’t be solved, so organisations must work to prevent vehicles from having the chance to be smashed into flecks. Future satellite networks and space stations are expected to have a maximum orbital lifetime of twenty-five years, after which they’re either sent into the atmosphere to burn up, or moved to a high graveyard orbit, well out of the way.

But what about the current situation?
The earth itself does have a self-clean function to an extent. Every 11 years the solar cycle increases the amount of energy received by the earth from the sun. This heats the lower parts of the atmosphere which expand outwards creating higher air drag which in turn causes debris in lower orbits to slow down and fall to earth. Though it doesn’t last for long as its replaced by objects descending from higher orbits. The problem here is that we are filling space much faster than the earth can clean up our rubbish.

In 2013, NASA said they aimed to concentrate on “mitigation” of the problem because there was “no practical method for debris removal.” They proposed a programme called Space Debris Elimination, or SPADE. It would shoot pulses of atmospheric gas at targets, which would destabilise their orbits and force them to re-enter Earth’s atmosphere and burn up. NASA argued that the SPADE system would be “failsafe” because the gas pulses would fade back into the atmosphere, leaving no additional junk in place of the junk that had been removed.

Meanwhile, the European Space Agency is working on its own solution. Agreeing that the micro-debris issue can’t be solved, they’re also going after larger pieces. ESA are working on a machine called E-DeOrbit, which would use a net or a robotic arm to capture large bits of junk and drag them towards the atmosphere, where both the hunter machine and the piece of junk would burn up. E-DeOrbit is expected to launch for the first time in 2023.

If the chain reaction predicted by the Kessler Syndrome theory ever began, we could find ourselves trapped within the confines of Earth’s atmosphere until a way was found to clean up billions of deadly, but tiny, pieces of space junk.

Human ingenuity suggests that we’d solve that issue if we had to. But it makes much more sense to find a solution before the Kessler Syndrome cascade occurs.

How long we’ve got to do that is anybody’s guess. And meanwhile, with more and more nations joining the space race, and more than a hundred vehicle launches every year, with that figure set to increase, the problem is only getting worse.