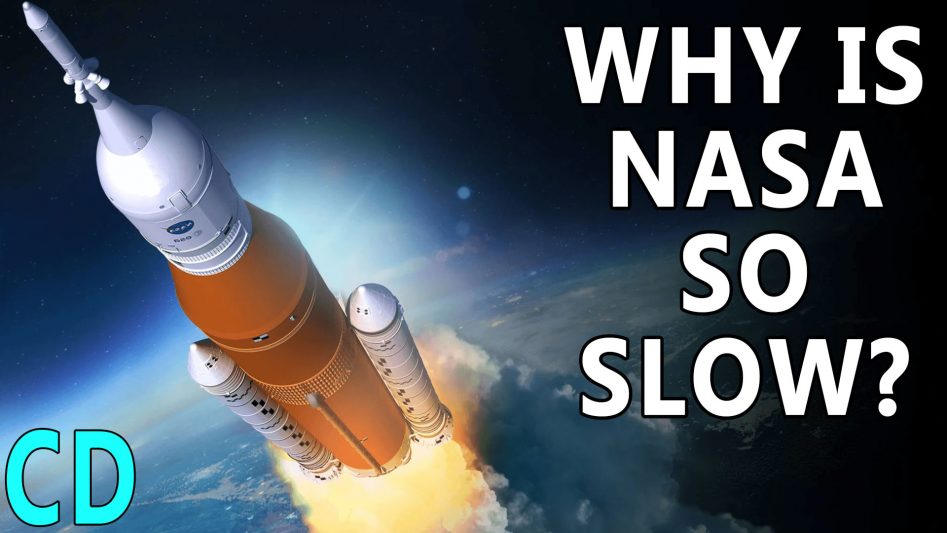 Each generation reinvents space as the cosmic frontier: in the age of Gagarin and Shepard, test pilots grinned at the TV cameras to prove they were made from ‘The Right Stuff’. And in 2018 orbital space is becoming a playground for billionaire entrepreneurs, turning their childhood dreams into reality.

In this picture, the administrators at NASA are the dull old guys in the background: dishing out most of the government money to established aerospace contractors who always seem to under-deliver, behind schedule. Despite billions of dollars in funding, (the story goes) NASA has let us down by failing to build interplanetary space-ships or Lunar bases and No off-world colonies have been established, to protect us against accidental extinction.

But is it true that NASA works too ‘slowly’, and if so, then why haven’t they been beaten to the punch already? Where are the privately-funded spaceships or orbital stations? SpaceX’s Elon Musk apparently believes his company can beat NASA to a manned landing on Mars: but he’s not the first to have such grand ambitions. A closer look at the relationship between NASA and private enterprise in America reveals that this is much more than a two-horse race to the Red Planet.

The Political Cycle
Although space history sometimes feels like a series of ‘giant leaps’, the small steps that appear on our screens are largely selected to be good ‘PR’ and marketing, rather than as a reflection of current aerospace technology. NASA is sixty years old this year – but its annual budget depends on what it can deliver within each four-year cycle of American politics. Even if a President expects two terms in office, any NASA project that takes longer than eight years to get results will either heap glory on his or her political opponent or face cancellation.

President John F. Kennedy’s commitment to send astronauts to the Moon took seven years to achieve, even with funding at eight times what they are today. The Space Shuttle, also known as the ‘Space Transportation System’ was in planning when the first manned Apollo missions flew in 1968 and 1969, but by the early 1970s, public support for expensive projects was fading, and the Shuttle faced cancellation. To save the project, NASA redesigned the reusable orbiter to be able to fly both civilian and Air Force missions.

The result was that the Shuttle was hugely complicated, cumbersome, and expensive. When the first missions began in 1981, the year Ronald Reagan entered office, the launch schedule was much slower than planned: the promised weekly flights became an average of just four missions per year.
But today’s standards, that seems like a decent turnaround.

NASA’s Shuttle required the precise coordination of advanced sub-systems built by different contractors. The largest contributions came from famous names in aerospace and defence: the orbiter was built in Palmdale, California by North American Rockwell. The engines were developed by Aerojet Rocketdyne, the external tank was built by Martin Marietta and the ill-fated solid rocket boosters were the responsibility of Morton Thiokol.

If the Space Shuttle had been built by any one corporation, it would have put them out of business. But through NASA, the US Government was able to fund an unlikely combination of technologies using the power of the world’s largest economy. In those terms, the Shuttle program was a success: building, flying and servicing a pioneering launch system over three decades.

But to its critics, the compromised design made every mission a disaster waiting to happen. At the beginning of the twenty-first century, the Shuttle was showing its age, and a new vehicle was desperately needed: but development was – you’ve guessed it – progressing more slowly than ever. In February 2003, the Orbiter ‘Columbia’ was destroyed on re-entry, costing the lives of its seven crew-members. America’s manned space program was grounded for two years while a thorough investigation was carried out.

New Private Enterprise
Meanwhile, in California, a small team of aerospace engineers were fine-tuning their own reusable space-plane: which was about to make world news. Burt Rutan’s company ‘Scaled Composites’ was competing for the ‘Ansari X-prize’, worth $10 million to the first non-government organization to launch a spacecraft above 100 kilometres altitude twice within two weeks.

On September 29 and October 4th 2004, Rutan’s ‘SpaceShipOne’ launched from ‘White Knight’ to 102 and then 115 kilometres, flying higher than the record set by the X-15, forty years earlier and enabling the ‘SpaceShipOne’ to win the ‘Ansari X-prize’.

British entrepreneur Sir Richard Branson immediately set out to turn SpaceShipOne into a commercial ride to space, announcing plans for a ‘Spaceport’ in the Mojave Desert. Branson initially said that his new company ‘Virgin Galactic’ would begin sub-orbital flights in 2007, but soon revised the date back to 2009. Seats began selling fast, at a cool $250,000 each. Branson also managed to secure vast sums in private funding, including almost $300 million from Abu Dhabi’s sovereign wealth fund. However, behind the scenes, development was progressing slowly on the engine for the updated ‘SpaceShipTwo’, a High-Test Based Peroxide rocket motor built by aerospace company Sierra Nevada.

Scepticism about Virgin’s ambitious schedule intensified in October 2014, when disaster struck a test flight of the ‘VSS Enterprise’. While passing the speed of sound, the ‘feather’ mechanism of the SpaceShipTwo was deployed too early, and Enterprise broke up at an altitude of 50,000 feet (15 kilometres) and one of the pilots, Michael Alsbury, was killed.

The accident was a catastrophe: not least for Branson’s attempts to market SpaceShipTwo as the future of space tourism. Despite major changes in the design, Virgin Galactic shifted focus to more modest projects, such as its SmallSat launch system, using a modified Boeing 747.
The era of New Space was underway: but the dangers were as real as they had been for the whole history of manned spaceflight.

SLS
On 21st July 2011, the Space Shuttle Atlantis touched down for the last time at the Kennedy Space Centre in Florida, leaving America without a manned space vehicle. This embarrassing gap in capability would leave NASA dependant on the Russians for getting it’s astronauts to and from the ISS and the Russians are making the most out of the situation.

In 2008 when the shuttle was still around, Roscosmos charged NASA $21.6M per seat but after the shuttle retired that price went up dramatically. The cost of a seat on the Russian Soyuz, a fifty-year-old expendable vehicle that had out-lived all its competitors in 2018 is now $81M

NASA’s next-generation launch system was shaping up to be a combination of two retired launch systems: an Apollo-type command module on top of a Shuttle-style orange fuel tank, boosted by two solid-fuel rockets. Adapted from the Ares rockets cancelled with the ‘Constellation’ program, the new rocket went by the no-frills name ‘Space Launch System’ (SLS). At 111 metres, the ‘evolved’ SLS would be just taller than the Saturn V, and more powerful – able to lift 130 tons to Low Earth Orbit.

The SLS will launch no sooner than 2019, beginning with ‘Block 1’, which will begin with a capacity of 70 tons of payload, including the manned ‘Orion’ module, to LEO. Boeing is commissioned to build the core stage, powered by four ‘RS-25’ engines upgraded by Aerojet Rocketdyne to provide 418,000lbs of thrust: a 5% increase in power from when they flew on the Space Shuttle.

New Solid Rocket Boosters under development at the same company that built them for the Shuttle: Orbital ATK have upgraded from four segments in the Shuttle boosters to a new five-segment design.

When the Block 1B launches in 2022, according to current plans it will be upgraded to a larger ‘Exploration Upper Stage’ (EUS), increasing the payload capacity to 105 tons to Low Earth Orbit, using four RL10-C3 engines and by then the RL-10 it will be a 60-year design.

In the race to return to the Moon and Mars, the tortoise may eventually beat the hare. Taking NASA’s approach, Jeff Bezos chose the motto for ‘Blue Origin’: Gradatim Ferociter, which means ‘Step by Step, Ferociously’. To illustrate, the company’s coat of arms bears a pair of giant tortoises on either side of America, climbing upwards from Florida and California, towards other worlds.

Bezos’s company has benefited from NASA investing in slow, incremental development, not least in the way this has nurtured expertise in reliable, proven technologies. Engineers and technicians from the big defence and aerospace companies have been persuaded to move to SpaceX and Blue Origin, with lucrative salaries and the glamorous image of the ‘New Space’ movement. Wherever these engineers and scientists are based, NASA awards funding in much the same way as it always has: by backing proposals from the strongest competitors.

And although Elon Musk is more famous for putting crash test dummies into orbit than writing mottoes, his company SpaceX have also steadily iterated their fly-back boosters towards the rapidly-reusable ‘Block 5’, due to launch for the first time in May 2018. With a billionaire entrepreneur part-funding the project, spectacular ‘rapid unscheduled disassembly’s’ have been more acceptable for the SpaceX brand than they would be to Lockheed Martin or Boeing, whose reputation for reliability depends on avoiding the bad press of an exploding test flight.

This is a real benefit that emerges from the new partnership of public and private space organisations: NASA can be both ‘fast’ and ‘slow’, supporting speculative technologies through companies like SpaceX, whose PR machine can turn a string of failures into a viral blooper-reel.

When private space tourism takes off, the world will be watching, and we can only hope that the spacecraft will be a reliable step forward, rather than a dangerous detour on the way to wider access to orbit. After the first, well-publicised flights, the likelihood is that there will be more demand for out-of-this-world transport than any one company could meet. A reputation for safety will win over more customers than the boasts of who crossed the line first.