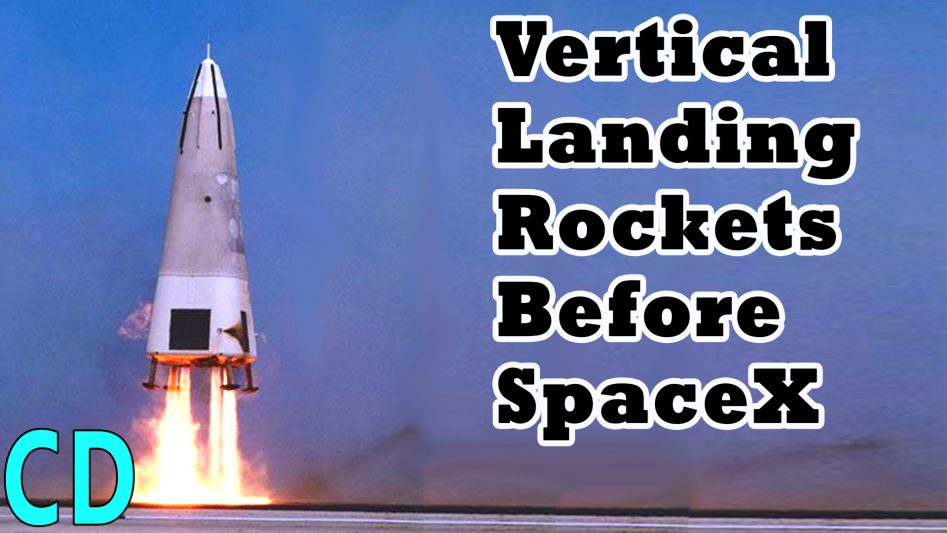 You may well be forgiven for thinking that rockets which take off vertically and then land again vertically were a recent development by the likes of Blue Origin and SpaceX but a quick look back the history of rocketry and you’ll see that this technique is far from new and was first used nearly 60 years ago.

The image of rockets landing vertically on their tail fins has been popularised in Science fiction since buck Rodgers in the early 1930’s, though it took nearly 30 years to bring the technology to a point where it could be used practically, though it wasn’t quite in the way you the way you might have expected.

The first instance of a rocket-powered vertical take off and vertical landing was shown in 1961 with the Bell Rocket belt. Although the first rocket pack had been developed & patented by a Russian Aleksandr Andreyev in 1919 and various people since then have claimed to have invented things like a flying rucksack, it wasn’t until the mid 50’s that Bell Aerosystems started work on the Bell Rocket Belt for the US Army. The Rocket Belt used a hydrogen peroxide engine but the 19 litres of fuel in the tanks could only provide 21 seconds of flight and travel about 120m.

It was a hit with the public and it was toured around the world and appeared in the 1965 James Bond film Thunderball but the US Army was less impressed with the amount backup required to get one man 120m and they cancelled the contract.

But within a few years there would be a rocket-powered vertical take off and vertical landing vehicle that would be a total success and be seen by hundreds of millions of people around the world.

That vehicle was the Apollo lunar lander, a design that was used in the most inhospitable place man had even been to and worked without fail on six separate missions.

Though when you think about it actually worked in reverse, because it dropped from orbit to land on the moon and then the ascent module, which was only part of the lander part of it took off to return the crew back to the command module and then back to earth.

There was also an advantage of landing on the moon because of its only one-sixth gravity. Fighting gravity is the biggest issue for any rocket but particularly one which had to slow and hover to find a landing spot.

Although the lander had some automation in the form of radar to detect the distance from the ground and computer control of the single-engine, when the radar which should have been turned off for the final part of the landing was accidentally left on, it overloaded the computer with data. Without the computer, it fell to Neil Armstrong to manually land on the surface of the moon.

Armstrong was well versed with the procedure as he had trained on an Earth-based version of the lander which was affectionally known as the flying bedstead. In earths gravity and with no computers to help him, he described controlling it as like trying balance a plate on the end of a broom handle and on one occasion when a thruster ran out of fuel he had just a seconds notice to eject and avoid certain death as the vehicle lost control and crashed.

This shows just how difficult is it to actually land something which is powered by rockets, especially an object which is tall and thin and not really designed to come back in the reverse of how it took off.

It wasn’t until the mid 1990’s that the first true vertical take-off and vertical landing rocket was seen in the form of the McDonnell Douglas Delta Clipper Experimental or DC-X.

The idea for a low-cost single stage to orbit vehicle using off the shelf components was proposed to McDonnell Douglas in 1985 by Max hunter, their ex-chief engineer for space systems of who had been thinking of the concept since the 60’s but McDonnell Douglas wasn’t interested in funding the idea themselves.

So Hunter who was also had worked for President Reagans Strategic Defence Initiative Organisation or SDIO, went with Jerry Pournelle and General Graham to sell the idea to the Vice President Dan Quayle, on the premise that any space-based defence system would need a delivery system that would far cheaper, more reliable and with much faster turnaround times than the Space shuttle.

With the approval of the project and it comes under the SDIO banner away from the bureaucracy of NASA and the Air Force, it allowed the small team of around 100 people at McDonnell Douglas to build a 1/3 scale prototype in just 21 months for a cost of just $60 million starting in 1991.

The design would take off like a normal rocket and then land back again in the same vertical position as it took off on extendable legs, under it own power and without any parachutes.

The prototype was never designed to go in to orbit and in fact only flew to a height of 2.5 km but that was enough to prove the concept. The Shell was custom built by Scaled Composites but the rest of the craft including the RL-10A engines and control systems were existing off the shelf components.

The testing program started in 1993 and flew three test flights until funding ran out as a result of the SDIO program coming to an end. NASA provided further funding and testing resumed. On one flight a minor explosion occurred and the DC-X can be seen with a hole in its side but it successfully performed an abort and autolanding. After the repairs, it continued testing in 1995 but after a hard landing cracked the shell and again funding was cut there was not enough funds to carry out repairs.

During 1995 NASA begrudgingly agreed to take on the project because of its previous test flight successes but with several upgrades and the Project would be renamed as the DC-XA.

In 1996 testing resumed but at this time it was also in competition with the Lockheed Martin X-33 venture star project which NASA had chosen as a possible replacement for the shuttle and ultimately the DC-X lost out to what NASA said were budget constraints.

But to many, the X-33 was NASA’s pet project and the DC-X was something they didn’t really want even though the cost building a new DC-XA was just $50 million, very cheap price compared to other rocket projects.

NASA would go on to spend $920 million on the X-33 over the next few years only to cancel it at the last minute due to technical issues with the composite fuel tanks and before any test flights had taken place.

Although the DC-X was at an end, it inspired the Blue Origin New Shepard and some of the engineers which worked on the DC-X project went to work Blue Origin. Although SpaceX wont say so directly we can see the influence of the DC-X on the Falcon reusable rockets too.

Some NASA engineers believe that the DC-X concept would make a good Mars lander with a crew of upto six. The testing on earth proved that it could be done and with the weaker gravity on Mars the payload capacity would be greatly enhanced.

And so we come the present day with both SpaceX and Blue Origin both using similar techniques to the DC-X, though with benefit of the extra time the designs have moved on considerably with the SpaceX Falcon proving it can be used for delivering commercial and military payloads into orbit and even sending cars to Mars.

They say that there is nothing new and that we stand on the shoulders of giants and that is pretty much true but each step of the way needs skilled people that fully understand what has gone before in order to build the new ideas. Just as the DC-X proved the principle of vertical take-off, in air manoeuvring and vertical landing. SpaceX have taken those principles and found new solutions to enable them to make a fully working, reusable, rocket delivery system, and that takes people that have the skills to make those next steps.
Our sponsor for this video, Brilliant.org, is dedicated to helping you gain those skills — turning you into a living, breathing, and most importantly, calculating scientist.
Head over there and prove for yourself just what it takes to get a rocket into orbit. Having a strong math and science skillset is crucial because it opens up so many ways to explore the universe. To support Curious Droid and learn more about Brilliant, go to Brilliant.org/CuriousDroid and sign up for free. So, if you’re ready to launch off the planet, the first 200 people will get 20% discount off the annual Premium subscription.