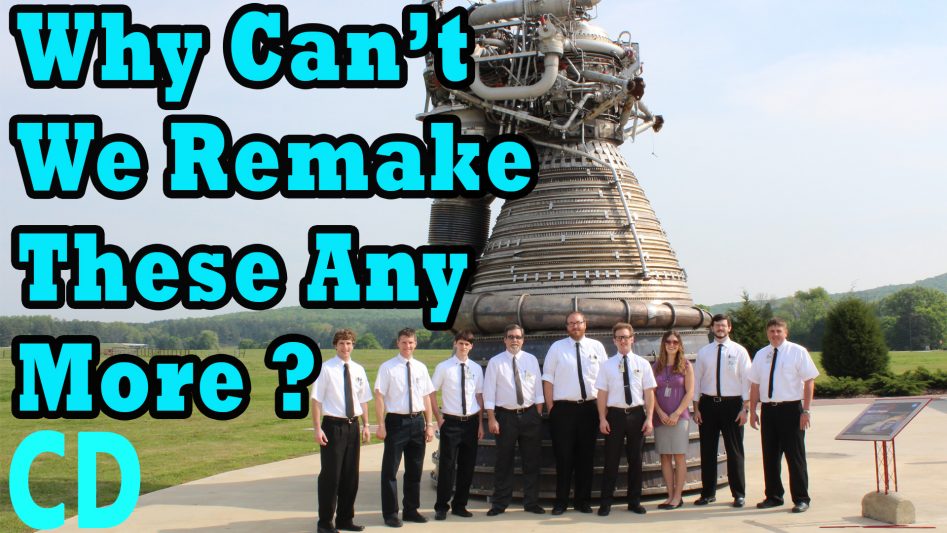 As we advance our technology ever forward you would think that re-making a 50-year-old design should be easy but things are not quite as simple as they seem.

When the Space Launch System or SLS was in development, NASA ran the advanced Booster competition to find a new booster system and two of the three entries used Liquid fuelled engines. Liquid fuelled boosters would be safer and could be shut down in the event of a problem, unlike the Solid Rocket Boosters which can’t.

However, unlike the shuttle, the new boosters would be single use only and would burn up when they fell back to earth.

But which liquid fuelled engines would be powerful enough, there aren’t really any massive engines in use today . The boosters could use the same modified RS-25D engines, those left over from the Space shuttle program which also used for the SLS’s core stage but it would very wasteful of a complex, expensive but yet highly efficient engine.

Now, we’ve already had an engine capable of doing the job, the mighty Rocketdyne F1, the engines that took men to the moon with the Apollo program but they haven’t been built since the 60’s. The F1 engines were not only very powerful but also simple, which meant they were cheap enough to be disposable, so why don’t we just remake them.

Now there is a common myth which says NASA lost or threw away the blueprints, which is, of course, complete rubbish, every design document ever created for Apollo is still available but if it was just a case of wheeling out the old designs they would have done that years ago.

No, the problem is not the design but the way the world has moved on since the engineers first created them in the 1960’s.

When a group of new present-day rocket engineers looked at the how they could recreate the iconic F1 engines they soon realised just how differently things were done some 50 years ago, when there was no computer-aided design, only slide rules and trial and error testing.

Components were designed, built and then tested and then often modified before being used. Complex engine sub-assemblies were welded together from sometimes hundreds of smaller parts, with welders taking sometimes a day to complete one highly complex weld.

Although they had the original blueprints, what they found was missing, was the was the notes made by the engineers as they effectively handcrafted every engine, each one slightly different with its own quirks and foibles.

The original builders of the F1 engines were highly skilled engineers, welders and fitters that did almost everything by hand because often that was the only way do it back then, and in the rush to meet deadlines they kept many of the tricks they had used to get things to work and go together in their heads or scribbled down on scraps of paper, long since lost.

Roll on 50 years and all of those skilled people have long since retired and many have passed away, taking their knowledge and skills with them.

With the advent of modern manufacturing techniques, many of those skills are no longer in use and few people today have them. So faced with 50-year-old blueprints, we find we just don’t have the people with the skills that can make them in the same way anymore.

By detailed examination of the remaining F1’s from museums and storage, our new engineers did discover enough to create a new F-1B engine should it ever be built.

Using modern computer modelling and manufacturing techniques, the new engine could be not only more efficient, it would be just as powerful as the uprated but unflown F-1A at 1.8 million pounds of thrust but more importantly it would reduce the number of manufactured parts from some 5600 to 40 and increase its reliability and decease costs in the process.

Although in the end NASA selected Solid Rocket boosters for the SLS, this exercise proved that it’s sometimes easier to redesign something from scratch than it is to try and remake the past.
So what you think of this short video format, let me know in the comments and I’d just like to thank our patreons for their ongoing support and thank you all for watching and please subscribe rate and share.