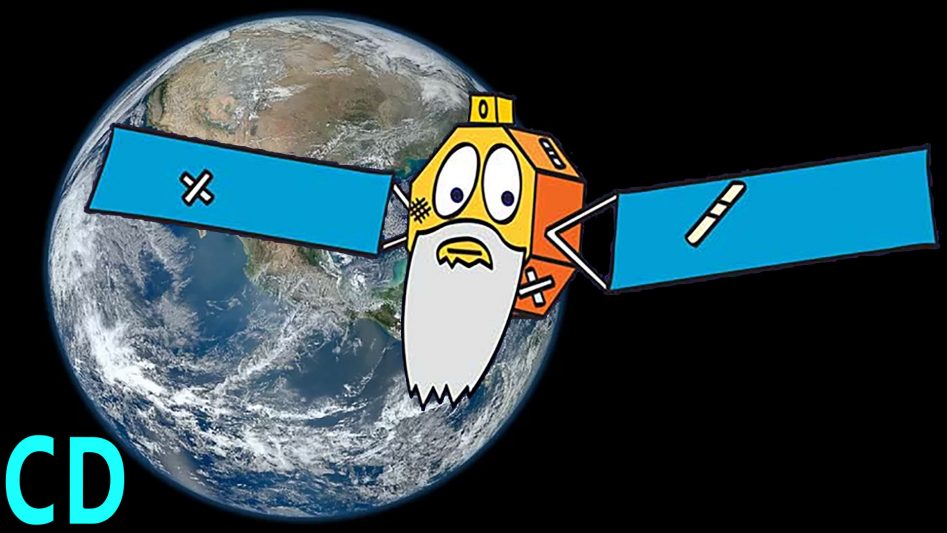 There is always a big flurry of interest when a new spacecraft is launched, like the SpaceX Falcon 9 with the Dragon crew capsule a few days back but as they say todays news is tomorrows chip wrapper so what happens to all the old spacecraft, do they just hang around up there in space and does the old adage of what goes up must come down still apply.

We have been putting spacecraft in to orbit and beyond since the 4th Oct 1957 with the launch of sputnik. So far we launched over 6500 but that figure is debatable because it depends on how you count them, was Apollo 11 one spacecraft, two or even three but which ever way we look at it that quite a lot of things we have put in to space.

The vast majority of those are satellites for communication, meteorology, and remote sensing. The life of a satellite can range from a few days to decades and really depends on where they are placed and how long they can maintain their orbit and age doesn’t necessarily  mean that much when it comes to this aspect.

Sputnik only stayed operational for 22 days and in orbit 3 months, America’s first satellite Explorer 1 stayed in orbit for over 12 years but the record for the oldest piece of space hardware still in space goes to the US’s second satellite Vanguard 1, launched on March 17th 1958. This grapefruit-sized satellite is still in orbit along with its . It was the first to use solar cells which enabled it to transmit signals for almost 7 years and although now its long dead it isn’t expected to return to earth until if that remains true it will be a 240 year long orbital life time.

The reason why Sputnik came down after 3 months and Vanguard is expected to stay there 240 years is due to the distance of the orbit from earth. Sputnik was 225km above the Earth at its orbital point or perigee and it’s apogee or the farthest point was 939km some 500km lower than it should have been.

Vanguard on the other hand has a perigee of 657km and an apogee of 3840km, the farther away from the Earths atmosphere the longer a satellite can stay in orbit. Even the ISS is close enough at 403km to encounter some small amount of drag from the upper atmosphere and if it weren’t for the regular repositioning that too would end up crashing back to Earth.

This will be the ultimate fate for almost everything that is orbiting the earth up to a few thousand kilometres. Now the surface of the earth is a very large area and even the biggest satellites like the ISS are very small in comparison and during re-entry most of a satellite would burn up in the atmosphere ending up as ash and dust but that still leaves the biggest densest parts to fall back to earth and possibly on to populated areas.

So avoid this, an area in the south pacific is designated as the Spacecraft cemetery. The area which is also known as “Point Nemo” or the oceanic pole of inaccessibility, is the furthest point from any land and located between Easter Island, Pitcairn Island, and Antarctica. Over 265 spacecraft are somewhere in this patch of sea including the International Space Stations predecessor Mir and 6 other Salyut space stations as well as numerous transfer and cargo craft used to resupply the ISS. When the time comes to finally decommission the ISS itself, what’s left of it will end up there too.

But this wont be the fate for the highest satellites in geosynchronous and geostationary orbits, that’s things like communications and meteorological satellites that stay over one place in an orbit some 35,786km above the Earth.

Here they are too far away to be affected by the atmosphere, instead their orbits are influenced by the gravitational effects of the Earth, Moon and Sun and even by the solar wind and radiation pressure. The life of these satellites is not determined by their electronic lifetime but by how much propellant they can carry to power the small thrusters used keep them into their allocated position.

Once that fuel runs out, their service life has come to an end even if they still working perfectly OK otherwise. Now just as spacecraft that come back to earth are directed to the Spacecraft cemetery in the Pacific, there is a corresponding place in space where the satellites that are just too high to be brought back down safely can be effectively dumped out of the way of other functional craft.

This is known as the graveyard orbit and is about 300km higher than the geosynchronous one. Just before they run out of fuel, they should be boosted to this higher orbit. Now I say should because not all of them have been moved though since 2002 anyone wanting to a license to operate a telecommunications service to the US has to commit to moving their satellite to the graveyard orbit at the end of its service lifetime.

Once there they will stay out of the way of the functional satellites below. In theory they could stay there for millions of years but in reality, they will be affected by gravity and the solar wind so they may well become a problem again at some point in the future but not for the few next thousand years or so.

Some satellites pose more of a problem than others if they come back, these are ones which used nuclear reactors to power their electronics. The Soviet Union put 33 small reactor powered Radar Ocean Reconnaissance Satellites in to orbit between 1967 and 1988. Although most of them have ejected their radioactive cores in to higher orbits, 4 have through various failures came back to earth and spread radioactive material over Canada’s north west territories the northern Pacific and the South Atlantic.

Only 1 US craft, the SNAP-10A launched in 1965 used a fission reactor as a test but due to an electronic failure unrelated to the Nuclear reactor, it shut down after 42 days. Since then it has been in a 1300km orbit above the earth but in 1979 it started shedding at least 50 large traceable pieces, maybe after a collision with other space debris though its 1300km orbit should keep it away from the Earth for about 4000 years.

Of course there are other spacecraft that have ended up much farther away and like the earth they are now in a heliocentric orbit around the sun including solar observatories like SOHO and others that ended up there by accident.

Once in orbit around the sun they are like any other small asteroid, they will stay there until the either collide with something or they are affected by the gravity of a larger body or planet. Over millions of years the charged particles from solar radiation will gradually break down much of the structure until they break up in to smaller and smaller pieces, ashes to ashes, dust to dust.

The S-IVB third stages of Apollo 8, 9, 10, 11 and 12 have all ended up in orbit around the sun and well as the Apollo 10 Ascent stage also known as snoopy, the only once manned spacecraft still to be in space.

Many others were lost on route to locations like the Moon, Mars and Venus including Ranger 3 and Ranger 5, Luna 1, Venera 1, Mars 1, Zond 2, Mars 4, Mars 7, Phobos 1, Mars Observer, Nozomi, Minvera mini lander and SHIN-EN.

For some, a very small corner of a foreign planet will for ever be earth, these are the probes and landers primarily sent to Mars but also to Venus, Saturn’s Moon Titan and a couple of asteroids.

As for Martian landers, 38 attempts have been made but only 19 have succeeded but some of those  have lasted for much longer than expected.

The Mars Rover Opportunity has recently been pronounced dead, 15 years after it landed. It lost contact with earth after it was hit by a large Martian dust storm. The 15 year lifespan is all the more amazing as it was only it was only built to last 3 months. Its twin the Spirit Rover lasted over 6 years before becoming stuck in a sand trap which limited the recharging of its batteries and lead to its eventual demise in 2009.

The Curiosity Rover landed in 2012 and was expected to last for 2 years but has been active now for 6-1/2 years later and its mission has now been extended indefinitely, effectively until its ceases to function which could many years from now barring an unexpected incident.

But the longest lived craft are those which we sent to go the farthest planets and beyond. Currently there are 5 such spacecraft, Pioneer 10 and 11, Voyager 1 and 2 and New horizons.  There are also some of the third stages of the launch vehicles and de-spin weights which were attached to the probes that will travelling in the same general direction.

In deep space the suns power is too weak for solar cells so all of these use radioisotope thermoelectric generators. Basically the heat from a radioactive source is turned in to electrical power for the space craft, and depending on the half-life radioactive material these can last for decades.

Eventually the power from the radioactive source and the degeneration of the bi-metallic thermocouples which convert the heat to electrical power will drop to a point where it can no longer power the craft. But its testament to the quality of the electronic components made in the 1970’s with 1960’s designs that they are still working in the harsh conditions of deep space over 4 decades later.

Pioneer 10 launched in 1972 and stopped transmitting due to lack of power in 2003, its currently about 18.1 billion km from earth travelling at 12 km/s in general direction of the star Aldebaran 68 light years away.

Pioneer 11 launched in 1973 and in 1995 due to a lack of power it was shut down and its antenna moved away from the direction of earth cutting any further communications. Its now about 15 billion km from earth travelling at 11.2km/s and heading in the direction of the constellation of Scutum.

Voyager 1 launched in 1977 and is still in contact with earth and expected to carry on until the mid 2020’s when it generators won’t have enough power to keep it running. Its was the first manmade object to reach interstellar space in Aug 2012 and is currently 21.6 billion km from earth, travelling at 16.9 km/s heading towards a star called AC 79 3888 some 17.6 light years away

Voyager 2 also launched in 1977, 16 days before Voyager 1 but was on a slower trajectory to Jupiter and Saturn and then on to Uranus and Neptune. It is expected to continue working until the mid 2020’s. It too like voyager 1 entered interstellar space in November 2018 and is currently 18 billion km from earth travelling at 15.3 km/s heading roughly in the direction of the Star Sirius 8.6 light years away.

And then New horizons launched in Jan 2006 and is newest and the fastest of these far flung wanders though Voyager 1 is faster due to the gravitation assist it gained from Jupiter and then Saturn. Its currently 6.8 billion km from earth and travelling at about 16.2 km/s. Providing nothing happens to it, New horizons should reach interstellar space by 2038 which is also the estimated life of the nuclear power pack.

All of these five spacecraft barring any collision or recovery by us or other intelligent life at some point in the future will continue out into our galaxy and although they will be long dead they could reasonably be expected to outlive humanity and even the earth itself, not bad for a piece of late 20th century space hardware.

So, what do you think of the old spacecraft still floating around out there… somewhere… let me know in the comments. Don’t to forget to check out some of our other videos and to subscribe, thumb up and share and hit that bell notification.