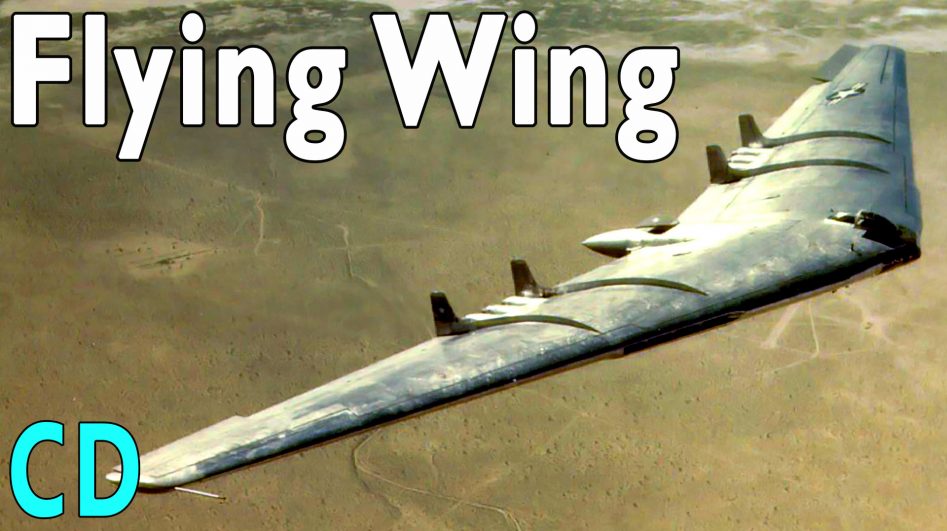 They are some of the most unusual aircraft of the past 80 years, responsible for sightings of UFO’s across the US and became the most expensive plane ever built and all from the principle that they are the most aerodynamic of any plane design and yet they fell into obscurity for almost 30 years, this is story of the flying wing.

Although they might look futuristic, the flying wing design has been around for over 100 years, and was originally inspired by the way birds fly.

Technically they are called tailless aircraft and in their truest form have no fuselage and no vertical or horizontal stabilizers other than the main wing, so all the crew, fuel tanks, payload and associated equipment are all within the main wing section itself.

The point of the flying wing is that they have the most aerodynamically efficient design of any fixed-wing aircraft with the least amount of drag because there are no other control surfaces to induce drag and as such they could fly faster subsonically, further and or carry a greater load than a conventional aircraft of the same engine power.

Whilst the inspiration for flying wings originally came from birds, when people tried to copy the shape of a bird it was found the craft they made were very unstable. The Wright Brothers tried this out on gliders and had the same problem, it was only after thousands of wind-tunnel tests that they discovered that using a vertical stabiliser made the gliders controllable and able to turn, and in 1903 they made first controlled flight in the Wright Flyer and as such the vertical stabiliser became part of aircraft design.

So if flying wings are unstable how did they make them fly. The early innovators like J W Dunne found that if the leading edge of the wing was swept back and they reduced the angle of incidence, the outer part of the wing act would like a normal vertical stabiliser. However, this creates more drag and makes the wing more inefficient.

Further work with ailerons and split ailerons at the end on the wings found that they could act like a rudder and giving the wings a twist near the tips could make the craft more stable.

In the 1920 and 30’s, work on advanced wing aerodynamics by Ludwig Prandtl and experiments with gliders by the Horten brothers in Germany showed that by changing the shape of the wing over its length, now known as a bell-shaped lift distribution, drag could be minimised for a given weight and this made the wings more stable and efficient.

This led to aircraft like the Horton Ho 229 which was designed in response to Hermann Gorings 1943 call for a light bomber for the Luftwaffe that could carry 1000kg of bombs up to 1000km at up to 1000km/h. Using a true flying wing it was the only design to come close to the design goals and the first flying wing to use jet engines.

Meanwhile, in the US, Jack Northrop, who had been fascinated by how birds flew since he was a boy also was also interested in all-wing designs and created the X-216H prototype in 1929.

Northrop continued his research into larger true flying wings and in 1939 produced the N-1M which would prove his theories and led to the full-size B-35.

During the war, the Army Air Corps issued a contract for a prototype heavy bomber aircraft that could fly from the US to Germany and back again in case Britain fell and the US was no longer able gain access to British airbases. Initially the contract was issued to Boeing and Consolidated Aircraft Company but later extended to Northrop due to the interest in the flying wing concept.

Initially, the B-35 used four Pratt and Whitney engines with large contra-rotating propellers which were supplied by the Army Airforce, these were powerful but proved to be very problematic. As no one in the airforce would take responsibility for the engine problems, Northrop decided to switch to single propellers but this then also reduced the power greatly, so in the end they switched to using eight newly developed Allison J35 jet engines and the two jet converted airframes were redesignated the YB-49.

More tests were performed and things were looking good but an issue was found when they tested it on trial bombing run. The aircraft took a long time to settle into stable flight for the run, it would drift from left to right slightly and have to be corrected by the pilot until it settled down but this was enough to cause issues with the Norden bomb aiming sight which needed a very stable platform to work correctly.

This was one of the side effects of not having a vertical stabiliser and the flying wings natural tendency to be unstable, though when the autopilot was upgraded to automate the yaw control as well, much of the drifting issue was removed.

Although the YB-49 was more efficient than the competing aircraft like the Boeing B-47, the thickness of the YB-49’s wing reduced its speed and meant that it couldn’t fly supersonically, that and the eight new  jets used more fuel than the propeller engines and this reduced its range too.

During this time it was thought by the top brass like General Curtis Lemay that thin winged jets were more suitable for supersonic flight and that speed to take the enemy by surprise was more important than range.

But in the end, technical issues, two crashes plus the politics of airforce contracting system and lobbying by Convair brought about the cancellation of the B-35 and YB-49. However, Jack Northrop believed it was a conspiracy by Convair to remove him and his company from the competition because he refused to merge his company with the Convair company after it was suggested that is was the only way to proceed by the  Secretary of the Air Force, Stuart Symington. Shortly afterwards Symington left the government to become the president of Convair further convincing Jack Northop that Symington had been working for Convair all along

Afterwards, the remaining B-35 and B-49’s were cut up for scrap and Jack Northop was so disgusted with the way he had been treated by the airforce he resigned from his own company and left the aviation business.

For years afterwards, the flying wing concept was thought to have been a dead-end in the history of aviation, until in the 1970s when interest in stealth technology to combat radar detection turned to the flying wing.

In the 1940s it had been noted that the flying wing had a much lower radar signature compared to conventional aircraft, especially from the side aspect due to the lack of the vertical stabiliser.

In 1981 Northrop was selected over Lockheed to build the ATB or Advanced Technology Bomber with the designation B-2. This was to be a low-level terrain following bomber that would use stealth technology and the flying wing design to operate vital penetration missions deep into enemy territory to knock out high-value targets without being detected.

With the new radar-absorbing paint and the flying wing design, the radar signature from the 52m wingspan B-2 was the same as that of a pigeon.

By this time computer-controlled fly by wire systems could fly the unstable design far better than any pilot could back in the 1940s and advances in engine exhaust shrouding could hide most of the heat signature from infra-red trackers.

But soon the huge amount of research that was required into developing both the airframe and the stealth technologies pushed up the cost of the program to dramatic levels.  The ongoing maintenance was also going to be hugely expensive requiring 119 hours of maintenance for each hour of flight and including special airconditioned hangers to preserve the stealth coatings.

By 1997, the average cost of each plane including R&D, building and testing was about $2.1bn. Although 132 B-2’s were ordered that number was eventually cut to just 21.

To date no B-2’s have been retired from the Airforce or lost in combat but one was lost in a crash as it was taking off from Andersen Air Force Base in Guam, though the crew did eject safely it became the single most expensive plane crash ever at an estimated cost of $1.4bn.

In 1976 Jack Northrop contacted NASA to let them know of the research he had done in the 1940’s and to give them the data he had collected about the flying wing so that it wouldn’t be lost. Soon after NASA wrote back and said that after re-evaluating the wind tunnel data for a range of large aircraft designs they could confirm his work and that the flying wing was indeed the most efficient design and load carrier.

In 2015 NASA started research into how birds can fly and manoeuvre without vertical tails using the aerodynamic theories of Lugwig Prandtl and an unmanned flying wing glider, the Prandtl-D with the intent to find new low drag aircraft designs not only for earth but also for the other thin atmosphere of planets like Mars.