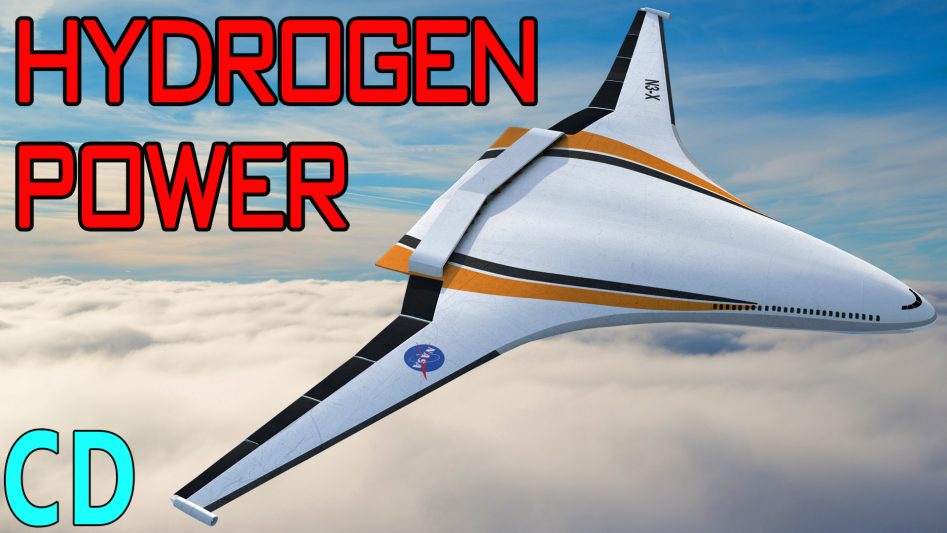 The first time we used hydrogen for civil aviation, it all ended rather badly, since then when you ever mention hydrogen-powered flight the first thing many people think of is the Hindenburg, but the times they are a-changing and with the pressure to find new non-fossil fuels for aircraft, will hydrogen make a return and become the future fuel for air travel?

Now whilst the Hindenburg disaster might have set back the use of hydrogen in mind of the public after the Soviets exploded their own atomic bomb in 1949, the US airforce had a new interest in high altitude reconnaissance flights and to avoid enemy fighters and surface to air missiles,  this necessitated research into new high energy fuels and at the top of that list was hydrogen.

Up until this point, liquid hydrogen was seen as a difficult to handle laboratory curiosity but in 1954 the NACA, the predecessor to NASA were attracted to hydrogens characteristics as a fuel for high altitude aircraft with the main feature being that Hydrogen has the highest energy to weight ratio of all fuels.

Over the following few years through ground tests, it was found that hydrogen worked well in turbojet engines and that and that it could work at altitudes of 30,500 meters or 100,000 ft were as regular JP-4 jet fuel flamed out at 23,000 meters or 75,000 ft. Thrust was also up to 4 percent higher and fuel consumption was 60-70-% of that of JP-4.

in 1957 the NACA began Project Bee which used a converted B-57 Canberra bomber to not only test hydrogen at altitude but also the hydrogen fuel tanks, pumping methods and handling of hydrogen both on the ground and in the air.

Through a series of flights up until 1959, it was found that the J-65 jet engine on the Canberra could be transitioned from JP-4 to Hydrogen and back again. One thing that was observed was that Hydrogen left a dense contrail whereas JP-4 left none, which was to be expected as the exhaust from hydrogen would have been almost entirely water vapour.

While interest in hydrogen-powered aircraft waned, the research data gained found its way into rocket developments culminating in projects like Apollo and the Space Shuttle both of which used liquid Hydrogen and Oxygen powered rocket engines.

One of the problems that faced the designers of hydrogen-powered aircraft was that although hydrogen is the most abundant element in the universe, on earth it is very rare in its pure form. This is because it is the lightest of all the elements and since the formation of earth it has long since evaporated away into space.

This means that it has to be created by breaking down larger molecules like water and hydrocarbons to release the hydrogen contained within.

Whichever way this is done, it is highly energy-intensive. The most common method used at the moment is Steam reformation by combing high-temperature steam at up to 1000C  with natural gas, normally methane but also propane, ethanol and even gasolene to release the Hydrogen.

This requires energy to heat the steam but it also produces carbon monoxide as a byproduct making this type of hydrogen production very fossil fuel dirty.

The cleanest way is electrolysis, this uses electricity to break water down into its component parts of Hydrogen and Oxygen but its uses more energy than Steam reformation.  If the electricity is generated by solar, wind, hydro or even Nuclear it is emission and carbon-free.

The handling of hydrogen is also an issue, to move it around practically for use in aircraft it needs to be kept as a liquid by cooling it to -252 Celcius in thermally insulated cryogenic tanks. At these temperatures, materials become brittle and break easily and it will leak through the tanks at the rate of about 1% per day.

In its gaseous form at room temperature, hydrogen will diffuse through carbon steel causing it to become brittle. So much of the existing gas pipelines and pumping equipment would have to be replaced if hydrogen were to be pumped through them in the future.

In Germany though, a dedicated 50km hydrogen pipeline in has been operating at 290psi for nearly 70 years without any incidents.

One of the objections put forward against hydrogen as a fuel was because of its highly flammable nature and that it was too dangerous to use. However, in tests carried out when hydrogen was first proposed in the 1950s, tanks of hydrogen and gasolene were deliberately ruptured and ignited and it was found that the gasolene fires were much worse than a hydrogen fire which dispersed rapidly and burned out very quickly. The gasolene fires, on the other hand, stayed close to the source and did much more damage.

Hydrogen Explosions were also difficult to initiate in air and could only be reliably setoff if the Hydrogen was mixed with an equal amount of pure oxygen and these factors have been borne out in the space industry over the last 50 years.

Even though hydrogen contains over three times the amount energy per kg compared to kerosene, because of its low density it takes up four times the volume but is much lighter. The fuel tanks on aircraft would have to be larger and in the fuselage rather than the wings like traditional jet fuel tanks, this would make the airframes larger and less aerodynamically efficient though the reduction in weight of the fuel could compensate for this.

However as we saw in the Flying wing video, Flying wings have the optimum aerodynamic shape and the volume inside the centre of the wing could be large enough for the hydrogen tanks without sacrificing the aerodynamics which is something NASA have been looking into with hydrogen-powered fuel cells and electric motors for large aircraft.

In the 1980s, the Soviet Union began to utilise the huge natural gas resources it possessed. Tupolev took advantage of this and proposed a hydrogen and later natural gas-powered aircraft the TU-155.

In 1988 it started it’s test flights and was due to come into operation in 1997. It managed around 100 flights before the collapse of the Soviet forced the closure of the program. Another issue was the cost of producing hydrogen was much more than the natural gas it came from which was another reason why the project came to a close because the oil to make kerosene was so abundant and cheap.

This is the main reason why we don’t hydrogen-powered jets even though its was shown to work over 30 years ago.

Oil and it’s infrastructure is everywhere on the planet and comparatively cheap. There also are huge vested interests in maintaining the status quo and keeping kerosene as the main aviation fuel. In a report produced by Airbus in 2003 titled “CRYOPLANE – Liquid Hydrogen Fuelled Aircraft” one of the conclusions it drew was that it would take a considerable political change to start the switch from kerosene to hydrogen and then it would 15 to 20 years before it could be implemented providing the research and development work were to continue at an adequate level.

That was nearly 17 years ago and nothing much has been done for hydrogen production since. It’s a bit of a chicken and the egg scenario, aero and carmakers don’t mass manufacture hydrogen-powered vehicles because of the lack of available fuel, and fuel production isn’t increased because there isn’t a mass market.  But in that time we have two things which have changed significantly and now make it more likely.

Firstly the huge increase in renewable power which is only going to increase, this makes true zero-emission hydrogen production possible on a large scale and the second is the public attitude to climate change which is starting to drive government policy and create the “considerable political change” required to make things happen.

So will hydrogen be the future of jet fuel, it makes sense from an ecological view and would kick start a whole new sustainable industry. The replacement of kerosene will still take a decade or more for the testing and infrastructure to be put in place and by that time large scale electrically driven aircraft powered by hydrogen fuel cells should be starting to appear shortly after, providing those with the vested interests can be persuaded or forced into action.

What do you think about hydrogen as the jet fuel of the future, let me know in the comments below and don’t forget to subscribe, click the bell notification and share?