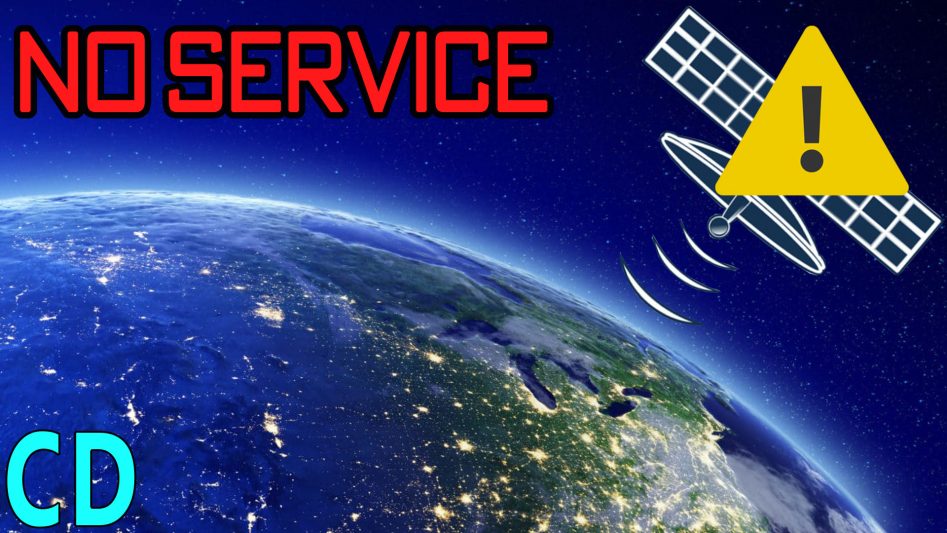 Could we live without GPS? , Now this sounds like a bit of a daft question, I mean what is the worst that could happen, maybe we would all have to learn to use a map again.

But seriously, the GPS service which was launched in 1978 for the US military and fully available to the world since 1994 is now so embedded into our infrastructure it’s being called the worlds utility service so what might happen if it stopped working.

Now whilst most people think that the GPS system is just there to act as a navigation aid to find your way around in a car, it’s also found its way into virtually everything that moves and other vital areas like the electrical power grid, banking, trading and mobile communications

This is where a failure of the system be that by natural causes like a solar storm or deliberate sabotage could have effects that would be far more profound than just having to dig out you old maps once more.

In a recent report sponsored by the US government, it was estimated that a GPS outage would cost the US alone about $1 Billion per day with the effect getting worse as time goes by until backups or new procedures are put in place. The report also found that since 1984, GPS has created about $1.4 Trillion in economic benefits, most of that since 2010, so you can see just how big it has become.

At the heart of this is time. All the GPS systems, be that the original US version or the Russian GLONASS, the European Unions Galileo, China’s Beidou and the other proposed national systems all work on the same principle and are in essence, extremely accurate syncronised clocks in constellations of satellites spread around the globe sending out timing signals which are picked up by GPS receivers like the ones in your smartphone or Satnav.

It’s the accuracy of these timing signals which is key and makes it all so very useful for so many applications.

The original US GPS system has at the moment 30 operational satellites in orbits of approximately 20,200km above the earth. Each one of these satellites has an atomic clock onboard which is synchronised to the master clock at the United States Naval Observatory in Washing DC to within 10 nanoseconds or 10 billionths of a second.

Each satellite broadcasts a continuous signal which gives its position in space and a timestamp. Each is also is resynchronized every day to the master clock in Washington to take into account any drift in the satellite’s clock that might have built up in the past 24 hours and for special relativity, because changes in the earth’s gravity would affect the clocks time to an outside observer especially when we are dealing with nanosecond timing.

To give you an idea of how critical this timing is, if there was a timing error of 1 microsecond or 1 millionth of a second, your satnav could have an error in the region of 330km or 200 miles.

Because of how important GPS now is, the Schriever airforce base were the Master control station is located, is heavily guarded and is amongst the largest concentration of classified areas in the airforce.

Where ever you are on earth and because of their numbers and positioning, the are always between 6 and 10 GPS satellites in line of sight but the signal from 20,000km in space is very weak and can be affected by the ionosphere.

The GPS receiver searches for the 4 strongest satellite signals and uses the satellites location information and the delay in the time it takes for the signal to arrive at the receiver from each satellite to calculate it’s position anywhere on the earth, the more accurate the timing, more accurate will be the position.

So how does this affect things like the power grid. Well, in the old day’s power grids were separate entities operated by different companies in different states or even countries. As the requirement for power grew, grids had to become connected.

To do this, the electricity which is sent as alternating current at normally 50 or 60 hertz has to match the frequency and phase of a connecting grid or they could cause serious damage to each other. A system called SCADA or Supervisory Control And Data Acquisition was developed used to monitor the electrical supply and synchronise the different grids but it could take up to 30 seconds between the measurement and the transmission of the data and this led to regular blackouts as grids overloaded when they became out of sync with each other.

In the 1980’s synchrophasors began to be used, these systems gathered data once every second and instantly transmitted it to the control rooms allowing much tighter control of power from many different sources but they had to be synchronised together to work.

As time has gone by it become easier to use GPS time as the timing source for the synchrophasors because this is a worldwide standard and allowed larger and larger grid configurations spanning multiple countries.

However, GPS is a 1970’s technology which was never intended for such critical infrastructure control, not because it doesn’t work, on the contrary, it works very well, the problem is security because even on the military side it is using standards which are decades old.

The signal is also weak signal its also very easy to jam completely or spoof it, that is override it with a fake signal with fake timing information. This is something which in the beginning was only thought possible by other advanced nation-states but with the advancement of technology, almost anyone can now buy the equipment to do this.

There have been instances when people have been using GPS jamming devices on trucks so as not the be tracked at work but the side effect was to block all the GPS signals for few kilometres around them. This might be an inconvenience to other GPS users on the road but when they came to an airport it caused major issues for tracking and guidance of smaller planes and vehicles using it.

In 2011, Its thought that a drone operated by the CIA over the city Kashmar in Iran was brought down by spoofing one of its GPS receivers, something which was later proven in 2012 in tests in the US.

If the GPS timing of a grid synchrophasor was spoofed and off by more than 26.5 microseconds it would compromise the integrity of the grid that could backout entire regions.

But while GPS timing of synchrophasors is still a limited but rapidly growing area, financial trading is almost completely reliant GPS timing for high frequency automated trading. The trading systems work by taking advantage of the market before the effect of news becomes apparent.

In this time, Millions of transactions can trade billions of dollars in seconds and this requires sub-microsecond timing with the trading computers often co-located in the network centres to avoid delays, even the position in the room and the exact length of cable used to connect them to the network becomes critical.

Another area of concern is mobile communications. Mobile phone towers use the GPS timing to synchronise their internal clocks which are used to multiplex calls into a digital data stream and pass them from tower to tower before re-assembling them and sending them to the correct phone. If the timing is out between the towers then the calls would be scrambled and lost.

It’s estimated that after a 30 day GPS outage, the communications network functionality would be between 60% and zero depending on how quickly the towers went out of sync.

It not just spoofing and jamming which causes concern, space weather and in particular, the radio noise created by solar storms can cause the weak GPS signals to be lost and in the worst-case scenario a massive solar storm on the same order of magnitude as the Carrington event of 1859 could even wipe out most of the GPS satellites, though if that were to happen now, losing the GPS signal might be the least of our problems.

There is also concern that the US military is far more reliant on GPS than either Russian or Chinese and any attack on the system be that directly on the satellites or by uploading false data could have an adverse effect on the US. For this reason, the US now holds military excerises in which the GPS receivers are turned off and alternative methods are used.

In 2018 the GPS Block III upgrade started and will of consist of 10 new satellites by 2023. These will have greater signal power and new secure coding for the military signals and an additional frequency for the civilian one, which will allow compatible receivers to remove the delaying effects of the ionosphere.

Other GPS systems like the EU’s galileo can work with the US GPS to create a larger more available GPS signal.

So is there anything we could do if we lost the GPS system. Well there are other older land based radio navigation systems which are still in use, one in particular called LORAN dates back to WW2. In recent years it has been updated to eLORAN and because it is basically a timing service it could be used as a substitute for GPS.

Being land based means that the signal is over million times stronger than GPS and therefore much more difficult to jam or spoof but it only covers areas were eLORAN transmitters are placed so it’s not a worldwide service.

The UK now uses eLORAN for navigation control thru the straights of Dover in the English Channel, the busiest waterway in the world because of fear that a GPS system could be knocked out by a spoofer on either side of the channel

So could we survive without GPS, yes we could but as we have never lived in a world where it suddenly disappeared, it’s loss on a worldwide basis is still unknown, but one thing is for sure, the more time goes by and the more integrated GPS becomes into our way of life the bigger and more profound the effect will be.