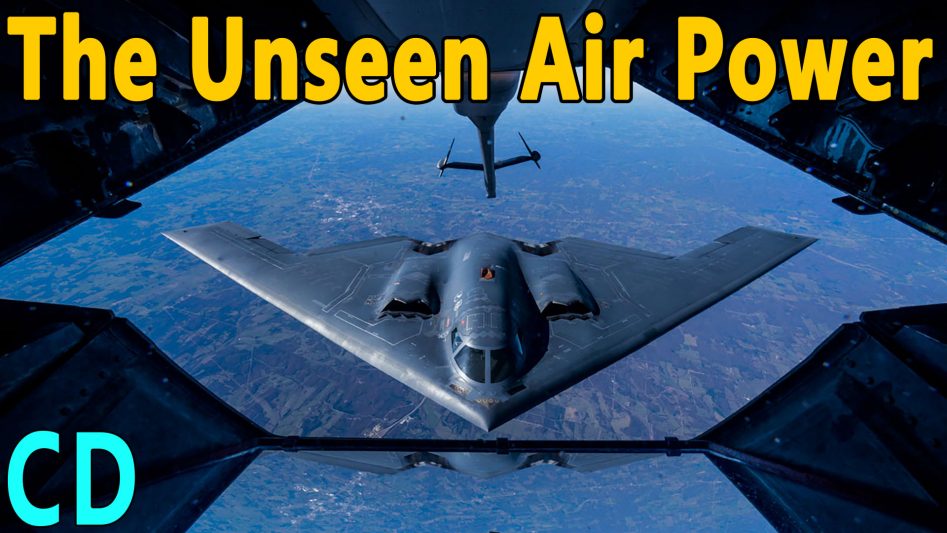 From Vietnam to the Falklands and from the cold war to the middle east, air to air refuelling or tanking is the unseen force enabler allowing those countries which have this capability, to project their airpower around the world and allowing their aircraft to stay in the air for as long as the crew have the stamina and the engines have enough oil, so how does this vital service affect the military.

Today’s video is sponsored by Fasthosts, now if you’re in the UK you have a chance to win 2 tickets to South by Southwest including flights and accommodation if you can answer my techie question.

The Boeing KC-46 Pegasus is the latest refuelling aircraft to be used by the USAF. From which other Boeing plane was it developed from?, I’ll explain more later on in the video.

Aerial refuelling might be seen by some as just the process of refuelling an aircraft in flight but the impact of this basic process has shaped the way the military has operated and ultimately how conflicts have been fought for the past 70 odd years, certain operations just would not have been possible without it.

But this apparently simple process is fraught with danger for both the aircraft being refuelled and the tanker carrying the fuel and have some notable accidents whilst refuelling.

The type of plane able to be refuelled is also not limited to just fighters which are the most commonly seen, almost any plane can be modified to allow air refuelling. From fighters to helicopters to Heavy bombers like the B-52, B-2 and to specially modified Boeing 747’s like Air Force One and the Boeing E-4B, the US strategic command and control aircraft also have Aerial refuelling capability, though no US president has ever used the air refuelling ability of Air force one and many of the tankers themselves can also be refuelled by other tankers.

The history of air fueling goes back the 1920s with first the US Army Air Service and shortly after the British and French airforces. This was done by having two planes fly slowly information one above the other. A hose would be lowered from the upper plane to the lower one and then fuel flowed under gravity. Although this method worked it was seen a more novelty than a practical solution.

This was also the time of the first long-distance flight records and aviation enthusiasts saw air refuelling as a way to increase their range.  One of these was Alan Cobham, he took the idea of the hose and created the grapple-line looped hose method.  Originally he intended for use with transatlantic flying boats and in 1935 he demonstrated it in action and over the following years his company Flight Refuelling Ltd developed it into the first practical air refuelling system

In the later part of the of WW2, this method was adopted by the RAF for their very long distance Tiger force of Lancaster and Lincoln bombers for operations against the Japanese homelands but the war ended before they came into service.

Whilst this worked Cobham realised it left a lot be desired and started work on what would become the “Probe and Drogue” which has become one of the two standard methods in use today.

This continued to use a hose which would be let out and trailed from the wings or body of the tanker aircraft. At the end, it had a drogue which is a bit like a shuttlecock which provides stabilization in the air as well as doubling up as a funnel to guide the retrieving aircrafts refuelling probe into it and lock onto. Once the connection is made, fuel is pumped from the tanker to the receiving aircraft.

In the late 1940s, general Curtis LeMay the head of the strategic command asked Boeing to develop a method that could transfer fuel at a higher rate than the Probe and Drogue for his bomber force. The result was the “flying boom”, this used a rigid gimbaled telescoping tube with small winglets which can be moved, this controls the position of the boom which is done by the boom operator who is located at the rear of the tanker. This could transfer about 3 times the amount of fuel in the same time compared to the Probe and Drogue.

A couple of other methods are also used but in a very limited form are Wing to Wing where the receiving aircraft refuels from the wing rather than a probe on the fuselage and buddy refuelling where both planes can supply and receive fuel.

The first purpose-built air tanker of which was developed by Boeing in the early 1950s was the KC-97 Stratofreighter which was in turn based on the Boeing Stratocrusier. The aircrafts KC identifier which is still used today stands for K meaning tanker and C meaning transport.

The British KC2,3,4 were based on the Vickers VC-10  and the Victor K2 Tankers were originally V force nuclear bombers before being converted to into tankers.

Although through the 1950 and 60s air refuelling became much more widespread it remained a dangerous operation and played a major part in the loss of a B-52G carrying four hydrogen bombs over Spain.

The Palomares incident of 1966 as it became known as occurred when the B-52 was about to perform the second refuelling of its mission as part of Operation Chrome dome.

Operation Chrome dome was the response of the US to the threat of a Soviet nuclear attack and involved up to 12 fully loaded nuclear B-52 bombers in the air at any one time from 1960 to 1968, flying from the US and around the edges of the Soviet Union which required sometimes 2 or more air refuellings per mission.

As the B-52 approached the tanker from the rear at 31,000 ft over the Mediterranean Sea, off the coast of Spain it was flying slightly faster than the tanker which was normal.  In this situation, the boom operator would call “break way, break way, break way” but no such call was heard by the crew of the B-52 and it continued towards the KC-135 tanker.

What appears to have happened is still not clear to this day but the B-52 struck the flying boom and collided with the belly of the tanker spilling fuel on to both planes which then exploded, destroying the tanker and the B-52. All onboard the tanker were killed along with three of the seven crew on the B-52 and four-armed Mk28 hydrogen bombs were initialled lost over the coast of Spain and the Mediterranian sea, though all were recovered eventually after a huge cleanup operation by the US.

Air refuelling was also instrumental in the 1982 Operation Black Buck, the bombing of the Port Stanley Airport by RAF Vulcan bombers in the Falklands conflict. The seven planed raids at 6600 miles or 12,200km round trip were the longest bombing run in history at the time. To get one Vulcan bomber from the Ascension Island base to drop 21 bombs on the target in the Falklands took 11 Victor K2 tankers, with tankers refuelling tankers and the Vulcan receiving eight refuels.

Afterwards, this came in for some negative reaction not least from the other parts of the RAF with the commander of 801 Naval Air Squadron saying that for the same amount of fuel to drop 21 bombs, the Sea Harriers of the carrier force could drop 2357 bombs.

That record stood for 19 years until Oct 2001 just a few weeks after the 9/11 attacks in New York, when the longest bombing raid to date took place as part of Operation Enduring Freedom. The first of six B-2 bombers took off from Whiteman Air Force Base, Missouri, flew over the Pacific ocean, halfway across the Indian Ocean and on to Afghanistan to destroy air defence systems to allow other aerial operations to take place.

But to story didn’t end there, the B-2 was left with its engines running whilst is was refuelled on the ground, new oil added to the engines, the toilet emptied and new food placed in the plane, then 45 minutes after it landed a new crew flew it the 13,200 miles or 21,780km back to Whiteman Air Force Base, a total engine running time of over 70 hours. Over three days 6 B-2s made the same journey, something that would have been impossible with air refuelling.

During the Vietnam war, B-52s flying from Guam and F-105s, F-4 Phantoms and F-111s amongst others flying from Thailand relied upon the KC-135 stratotankers to carry out their missions. But the tankers could something which is little known about and does seem really rather amazing which was to rescue damaged planes by towing them back to base.

There is an instance of an F-111 Aardvark which was damaged by a missile over North Vietnam and put out a distress call. A KC-135 which was about to return to base heard the call and responded to meet up with the F-111. Once the boom was attached the operator could see that the F-111 had a serious fuel leak. Under certain conditions like this when the plane was still flyable but would lose too much fuel to get back the base, the boom locking mechanism was strong to pull the receiving plane along whilst transferring fuel. In this instance, the F-111 was towed back to it’s base in Thailand where it was able to land Safely.

These are just a few of the stories of the often unseen air refuelling which occurs every day around the world and the effect it had on the modern military.

Now our sponsor for this video Fasthosts also deals in what could be called the unseen services of the internet, from domain names, web hosting, email hosting and alike.

One of the services which they offer and I use everyday is Microsoft office 365. I use word for all my scripting, one note for all my video subject ideas and Exchange outlook for my email. Because the service is hosted its always upto date and you can have use it of upto 5 devices.

I like exchange outlook because I can always get my emails on any device it will run on even if the iPhone fails or the hard on the computer packs up I know all my data is safe online and just downloads when I’m set back up again including any new messages that have arrived since you were offline. And with Fasthosts offing you a 50Gb mailbox, it’s unlikely you’re going to run out of space.

The Boeing KC-46 Pegasus is the latest refuelling aircraft to be used by the USAF. From which other Boeing plane was it developed from?

If you’re stuck the answers just over halfway through the video, just click on the link in the description or enter the URL now showing and good in the competition.