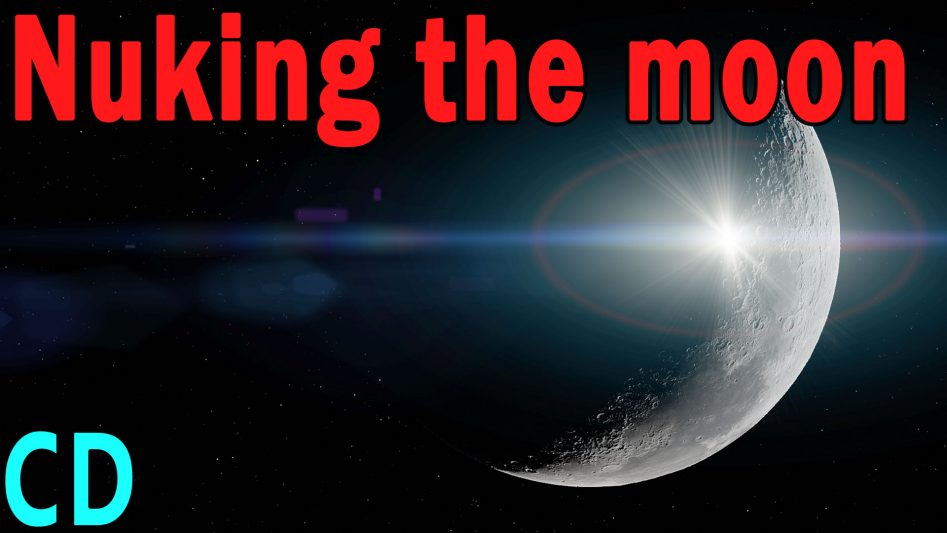 Probably one of the most inspirational moments in human history was the landing on the moon by Apollo 11 and Niel Armstrong’s first steps on the surface but maybe if project A119 had gone ahead almost 10 years earlier, things might not have looked quite so rosy knowing that the US and possibly the Soviets had already used the moon as a nuclear testing ground to basically show how clever they were to the world and intimidate each other with whos got the most powerful and accurate missiles. So just what was Project A119 and the later to be famous person that worked on it and inadvertently revealed the top-secret program.

As the cold war progressed in the late 1950s and the Soviets took the lead when they put Sputnik 1 into orbit around the earth on  Oct 4th 1957, then just 4 weeks later on the Nov 3rd, Sputnik 2 carried Laika the dog into orbit, the shock to the US was palpable.

If the Soviets could carry a satellite around the world with either a radio transmitter or a Dog onboard then it could do the same with a nuclear weapon and placing it anywhere on US soil within an hour was also possible. This is exactly the message the Soviets wanted to send and now it was up to the US to try and show they could do the same.

But the rumour mill was already running at full steam before Sputnik 2 was launched. On Nov 1st 1957 just over 3 weeks after Sputnik 1, the Pittsburgh Press ran an article in which it claimed that US intelligence believed the Soviets were going to explode a Hydrogen bomb on the Moon on Nov 7th which would also be the 40th anniversary of the Russain revolution and would announce this ahead of time so that the world could watch.

The article went on to say that although they didn’t think that they could do it on the first try, the fear was that the guidance system wouldn’t be accurate enough to place it on the terminator line so that it would show up more than the brightly lit surface of the full moon on Nov 7th. They claimed that if it missed the moon and went wide it could slingshot around the moon and head back to earth, H-bomb and all.

To top it all off, at the same time President Eisenhower was given a report saying that the US had fallen well behind the Soviets in missile technology, the so-called missile gap and to push home the point of how advanced that the Soviet Premier Khrushchev believed his rockets were over the Americans, he challenged the US to a peaceful missile shooting match.

After the very public televised failure of the first US satellite attempt with the Vanguard TV3 on the  6th Dec 1957 and then the failure of its backup in February 1958, the US eventually placed Vanguard 1 into orbit in March 1958. However, over the next year, 6 out of the 8 following vanguard missions failed and the US was very much on the back foot.

So quite amazing with this track record in mind, officers from US airforce approached Dr Leonard Reiffel, a senior physicist at NASA and asked him if it could be possible to detonate a nuclear weapon on the moon as a morale booster the US public and a show of the US’s technological prowess to the Soviets and the rest of the world.

After being intrigued by the airforces request, in 1958 Reiffel put together a 10 member team which included Gerald Kuiper, whom the Kuiper belt is named after and a PhD student of his, a 24-year-old Carl Sagen.

Together, the team looked at how they could get a warhead to the moon and what the effects would be of a nuclear blast on it including things seismic shock, and the possibility of radioactive dust making its way back to the earth. They also looked at the effect on biological life, even though it was thought it highly unlikely there was any on the moon and radioactive fallout on the surface of the moon, this was one of the jobs that Carl Sagen was tasked with.

Initially, the scientists wanted to use a hydrogen bomb of about 1 megatonne but that was deemed too heavy for the launch vehicle, though what rocket they would have used was not specified but its thought that it would have been one of the airforces ICBM’s that were in service by 1959.

So in the end, a small device of about 1.7 kilotons, about a tenth of the size of the Hiroshima bomb was proposed.

However that’s as far as it got as in 1959, the Airforce cancelled the project out the fear of bad public reaction and the thought of what might happen if the rocket failed during launch or it missed the moon and ended up coming back at the earth, much like they thought the soviet one might do. The signing of the Partial nuclear test ban treaty on 1963 and the outer space treaty in 1967 put paid to any further ideas of nuking the moon even though it was suggested in 1969 by a scientist for seismic work to discover the makeup of the moon’s core, that idea was also dropped.

The Project remained a secret up until the late 1990s when the writer Keay Davidson was researching the life of Carl Sagen for a biography. During this, he discovered that Sagen had included details of the project in an academic scholarship application, even though the project was classified and inadvertently revealed a top-secret project.

The publication of the book “Carl Sagan: A Life”, and the public interest in it lead to freedom of information request and the release of the only document left on Project A119 “A Study of Lunar Research Flights – Volume I” which we have shown here and you can download from a link in the description. There were up to eight other documents but they had been destroyed in the 1980s.

And what of the Soviets, well they did plan to detonate a nuclear weapon on the moon around the 1959 time but it seems they arrived at pretty much the same conclusion as the US and that it was not worth the bad press and risk of something going wrong.