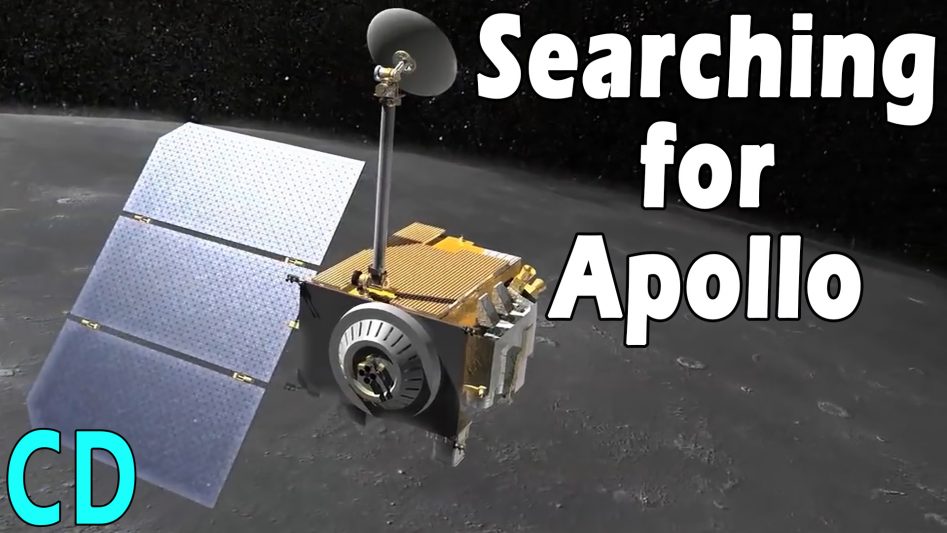 With the new goal of NASA to get humans back on to the moon by 2024 with the Artemis program, we are back to a similar situation to when Apollo was getting ready to go to the moon in the 60’s. Basically, we needed to find somewhere to land and while you may be thinking well why can’t they just land anywhere or even next to Apollo 11 just to prove all the naysayers wrong there is a new requirement for Artemis.

This time around we’ll be looking for places that could support long term bases for years not just a couple of days and for that we have to know much more about the moon than for Apollo and this is why we needed the Lunar Reconnaissance Orbiter and during the mapping process it did some thing no previous orbiter had been able to do and that was to image the Apollo sites for the first time in five decades as well other much more recent arrivals on the moon.

Things have changed a lot since the mid 60’s and before Apollo 11 landed. Back then there were no reconnaissance satellites capable of imaging the moon in detail. In 1959 the Soviet Luna 3 mission had imaged the far side of the moon but the resolution was low, we could get better images of the earth facing side from here on earth but to land there we needed much higher resolution which was beyond any terrestrial telescopes.

So a sequence of Ranger probes would be launched by NASA to get close up high res images of the moon’s surface.

After a rocky start in 1961, the Ranger program got the name of the “shoot and hope” program because the first 6 probes failed in one way or another. Finally, with the block three missions from 1964 to 65,  they got the results they needed. This was achieved by crashing the probe which was fitted with six different TV cameras onto the surface of the moon at the desired locations and relaying the TV pictures back live to earth as it happened.

Although it sounds a bit drastic it worked and in the final few seconds of each flight, they produced the highest resolution images yet taken of the moon and of the areas that would later become the landing sites for the Apollo missions.

Spool forward to the early 2005 and the renewed interest in returning to the moon with the constellation program which was meant to put men back on the moon in a more permanent fashion no later than 2020.

To do this they would need to find any deposits of water on the lunar surface for making not only drinking water but it can be split into hydrogen and oxygen which can make electricity with fuel cells which can make rocket fuel to carry missions on to Mars or beyond and also supply oxygen to breathe.

Back in the Apollo days, it was thought that the Moon was essentially dry with almost no water. But with the landing of the Soviet Luna 24 probe in 1976 which returned lunar samples back to earth, it was found that they contained 0.1% water by mass. This led to the thought that there might be a lot more water on the moon that we first thought with deposits of water ice in the permanently shadowed craters of the moons south pole.

So to map the moon in much greater detail than anything before the Lunar Reconnaissance Orbiter or LRO was conceived.

This would not only image the surface with its two cameras down to a 0.5 meter per pixel resolution but also had a range of other instruments onboard including a laser altimeter, radiation detector, RF frequency radar, neutron detector, surface temperature detector and an ultraviolet mapping system that would use light from the stars to help look for water deposits.

The LRO was launched on the 18th of June 2009 and entered the moon’s orbit 5 days later. Although its primary mission wasn’t to look for the remains of the Apollo program, with less than a month to the 40th anniversary of the Apollo 11 landing the principal investigator for the LRO camera Mark Robinson wondered if they could image the Apollo sites in time for the anniversary celebrations.

As the LRO had only been in orbit for a few weeks and the commissioning work for the instruments was still ongoing, it was going to be touch and go if there was going to be enough time. The LRO was still settling into its orbit from its arrival and at about 50km, twice the height it would normally be which would have an effect on the images.

With about a week until the anniversary, the command was given to image sites as the LRO passed overhead and revealed them for the first time since they landed. The images were better than expected and showed the remains not only of the descent stages but also the lunar rovers of Apollo 15, 16 and 17 as well as science experiments left behind and even the shadows of the US flags still standing. Most interestingly they revealed the footprints left by the astronauts as they walked or bunny hopped across the surface.

Now you may be wondering how you can see footprints from 50km away which are very much smaller than the descent stage.  Well, the moon surface is very dusty but untouched and just like walking through fresh snow you leave a trail that is larger and more obvious than just footprints, the same applied to the rovers, they left a parallel set of tracks.

This top-down view became of great interest because it could show for the first time exactly where the astronauts had been which could be correlated with the rocks they collected and the photos the took.

On the Apollo 14 mission, for example, the astronauts were due to go to a nearby crater called cone crater to collect rock samples from around the edge.

The journey was about 1.5 km by foot but after two and a half hours, some 30 minutes longer than expected they still couldn’t see the crater and the maps they had were not of a high enough resolution for them to know their exact location, so they collected the rock samples from where they were and returned back to the lander.

With the new LRO images, it could be seen that they were in fact within about 30 meters from the rim of the crater and missed out on the view across and down into it.

On the Apollo 12 mission, they had landed within walking distance of the Surveyor 3 probe which had landed in 1967 and again the top-down view showed the route they had taken to get there. On later missions with the Rovers, you can see where they went and on the longer journeys the large boulders and craters they filmed and photographed are all visible from the LRO.

The Lunar Orbiter Laser Altimeter or LOLA instrument could also see the surface as a contour map. This has a resolution of 9cm from 50km high and as such could also see the Apollo sites and others like the Soviet Lunakhod rover  missions but there was a problem with some of the experiments left behind both by the US and Soviets.

The Laser Ranging Retroreflector was left at the site of Apollo 11,14 and 15 and a similar setup by the Soviet Luna rovers. These consists of a series of corner-cube reflectors which reflect light back from the same direction that it came.

These are the only experiments left by Apollo and Lunakhod missions that still work and are used to this day to measure the distance between the Earth and the moon. This is done by firing a laser from the earth to the reflector on the moon and measuring the time it takes to get there and back which is used to calculate the distance.

Firing from earth means that the width of the laser beam by the time it gets to the moon is 6.5 km across and extremely faint but the LRO’s laser is only 30km away under normal conditions and as such is much more powerful so it has to be turned off when flying over these sites or it might blind and damage the optical sensor.

However, in 2017 the altitude of the LRO was increased and along with the decreasing strength of the laser allowed these sites to finally be mapped and the data integrated into detailed contour maps.

The ability to vary the attitude of the LRO down to about 20km has allowed it  get not only better images of Apollo-era sites but of much newer ones like the crash site of Indian moon lander Vikram and the Chinese Chang’e 4 lander and rover Yutu which landed on the far side of the moon in Jan 2019 and also the Israeli lunar lander Beresheet that almost made landed on the surface in April 2019.

But the primary reason for the lower altitude was to get closer to the permanently shadowed craters of the south pole like the Shakelton crater to look for water ice with its variety of instruments.

The LRO has also been a testbed for laser communications in deep space by sending high-speed data from to and from  NASA’s Goddard Space Flight Center to the LRO. By 2011 and after the initial exploration phase had ended the LRO had sent back over 192 terabytes of data, more than all the other planetary missions combined.

With the LROs continuous mapping of the moon, it has been able see things that would otherwise be missed.

There have been reports of bright flashes seen on the moon for hundreds of years. It’s been suspected that these were meteors hitting the surface but now they could compare temporal image pairs basically the before and after images of where the flash occurred.

One impact which occurred on the 18th March 2013 made a flash ten times brighter than anything seen before. The new LRO image of the same area after the flash showed a new crater 18 meters across.

It’s thought that the meteor was travelling at about 90,000 km/h and was about 30cm across with a mass of 40kg. The resultant explosion was equivalent to about 5 tons of TNT. Although the crater wasn’t that large the debris field extended up to 30km away, helped by the low gravity and lack of atmosphere.

As of March 2016 the LROC team using these before and after images had discovered over 47,000 new splotches on the moon.

The LRO has enough fuel for at least 5 more years if the funding is still available but hopefully with the Artemis program coming in 2024 there will be plenty more time to find new landing sites and image the moon to its fullest extent.

Robotic probes like the LRO have become the mainstay of space exploration, in fact if you think about it, its rather ironic that we need to send many different types of probes like the LRO to discover if a journey to places like the moon by man is indeed possible, which raises the question of, do we as humans need to go at all. Some people think we should be doing more cheaper robotic missions instead of looking at very expensive manned ones but that’s the subject for another video.

And to close the video, I would also like to say a big thank you to all our Patreons out there for their ongoing support.