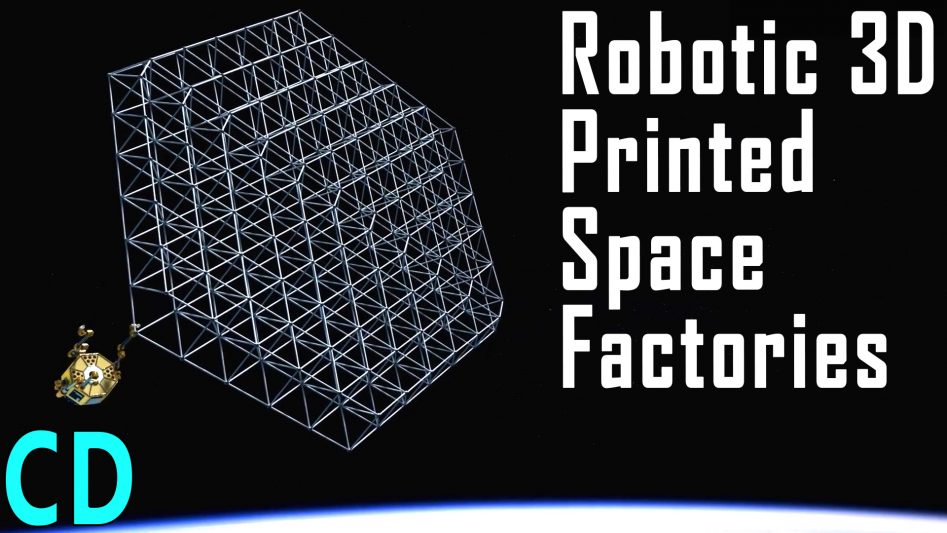 While everyone has been wowed in the last couple of years by the new rockets from NASA, blue origin and SpaceX’s Falcons and more recently the tests of their Starship an equally important side to our long term space goals has been going on almost unnoticed.

If you’ve ever watched films like Star Trek you will have seen the huge space docks where ships like the USS Enterprise are built and maintained in space. Now of course that’s science fiction set hundreds of years in the future but at some point if we want to have bigger and more useful habitats and even spacecraft we are going to have to build them in space instead of here on earth and launching them in to space as we do at the moment. So how are we going to make and operate these space factories of the not too distant future?

If you’ve seen almost any of the heavy-lift launches in the last decade or so then you will have noticed the oversized fairings that have been used. As payload sizes have increased, so have the farings needed to keep them safe until they make it into orbit.

This has also become known to some as the “tyranny of the faring” because it imposes a limit on how large the payload can be but through clever packaging and ingenious folding mechanisms, satellite and spacecraft makers have pushed their designs to the limit.

Take for example the James Webb Space Telescope, when deployed it will be much larger than the rocket fairing containing it. But once in space, unfolding it requires very complex mechanisms that must work perfectly when it’s being deployed.

Unlike the Hubble which is about 540km above the earth, the James Webb will be about 1.5 million km from Earth. This means that if anything goes wrong with the deployment like part of the folding mechanism getting jammed or damaged there won’t be a rescue mission going to fix the $10 billion  space telescope.

So the carrying capacity of the launch vehicle also determines the size of the craft it’s going to deliver.

It would have been great to have had maybe an 8-meter mirror in the Hubble like the largest telescopes on Earth but there are no rockets that could carry such a large item except possibly SpaceX’s Starship when ever that is ready. Hubble’s actual size and the spy satellites it’s based on are all 2.5 meters and was determined by the size of the cargo bay on the space shuttle.

If we could build such things in space their size could be much larger and without gravity to get in the way we don’t to worry about it collapsing under its own weight. Building things without gravity will lead to designs that simply can not be built on earth let alone survive the rocket ride into orbit and beyond.

Whilst humans will be involved in the process much of this will be done by robots and there are already companies that have been testing out such technologies on the ISS for several years.

The process is called additive manufacturing and means the humble 3D printer combined with robotic assembly is set to become one of the primary methods of space construction.

US company Made in Space was the first to test a 3D printer on the ISS allowing the crew to print specific tools without having to wait months for the next resupply mission. In 2017 they demonstrated the ability to 3D print structural beams in a NASA vacuum chamber which mimicked the conditions of space to prove that it could withstand the vacuum and temperatures found there.

Now these are not going to be like the replicators in Star Trek but it’s a start and in 2019 NASA awarded Made in Space a $73.7 million contract to demonstrate the technology in space.

The NASA OSAM-2 mission which is due to launch no earlier than 2022, OSAM meaning “On-Orbit Servicing, Assembly and Manufacturing” is the NASA and Made in Space partnership that will use Made in Spaces’s “Archinaut One” spacecraft which is about the size a refrigerator to construct its own solar panels once in space.

One of the limiting factors to satellites is the amount power they can have available to them. Large solar panels make more power but even with the best folding technology, there is a limit to how small that can be and fit on to a rocket which limits the size of the spacecraft or satellite.

Using new flexible solar panels that can be rolled up, the Archinaut One will construct the support beams which would normally be folded up by 3D printing them as the panels are deployed. Doing this in space will allow them to be much larger and when fully built they will extend 10m from either side of the spacecraft allowing them to generate five times more power than traditional folding panels on a craft of this size.

The Archinaut is a customizable suite of manufacturing and assembly technology that can be integrated into free-flying satellites. Using this type of in-space manufacturing you can see how much larger the solar panels on current spacecraft could be compared to how they are now.

As the technology develops it should be possible to build larger structures in space completely autonomously. Things like large space telescopes, communication antennas, radar booms, etc. Resupply ships would deliver raw materials allowing structures to be as large as is practical. It could also be adapted to work on the moon or mars to build structures using localised materials and as we venture further out asteroids could supply raw materials like metals.

But in order to make machines that will have to work unaided and in places where no maintenance or repairs will be available you have to have ultra-reliability. However, things which we take for granted here on earth like bearings, gearboxes and the lubricants in them can be a major problem in space because lubricants can freeze and cause mechanisms and gears to lock up. They also have a wear limit beyond which they fail. By the time the Mars rover Spirit had become stuck in a patch of soft soil in 2009, two of its six wheels had developed problems limiting it’s ability to extricate itself.

If you try to build mechanisms without lubricants, in a vacuum smooth metal with very flat surfaces can fuse together in a process called cold welding. Lubricants in sensitive areas like filter wheels in space telescopes and carousels that change instruments can also end up being deposited on to highly sensitive areas.

New work on what’s called frictionless technology using superconducting magnetic bearings and gears where the components never touch each other is underway. These promise to do away with the need for lubricant, be immune to wear and friction, allow less precise alignment and be able to work down to cryogenic levels in space, the very temperatures suiting superconducting magnets.

Instead of gears with teeth that touch, the magnetic gears repel and attract each other using magnetism. The Magdrive developed by Spanish Madrid Carlos III University is one such device that both ESA and NASA are looking at. Their magnetic gear reducer, a bit like a car gearbox not only has a contactless transmission, it also has input and output axels that levitate without any bearings, allowing it to work at 3000 rpm down to -210 Celsius in a vacuum. The transmission shafts also self-balance which eliminates oscillation and is the first gearbox in history that does not have that type of friction. A normal operating temperature version is also been developed for use on earth there is a need for use in a lubricant-free environment.

Making things is space could have a benefits us here on Earth. Two companies Techsot and 3d printer maker nScript are looking at making human organs in zero gravity. 3d printers can already construct early versions of things blood vessels, bones, Cartledge like ears using bio-ink comprised of human cells and other tissue that supports the growing organs.

However printing structures that are just one or two cells thick here on earth, the pull of gravity can cause these tiny delicate structures to deform which then need elaborate microstructures to hold them up. If these could be made in zero gravity there is no downward pressure deforming the structures as they are grown. The long term hope is that in the next 5-10 years they will be able to create whole organs in space that would be used on earth though that will need to create vasculature and nerve endings, and that technology doesn’t yet exist.

These are early days but the tyranny of the faring may be coming to an end in the not too distant future and then we can start to truly exploit the space above us.

So thanks for watching and I hope you enjoyed the video and don’t forget to subscribe, thumbs up and share. And before I go I would like to thank all of our patreons for their ongoing support.