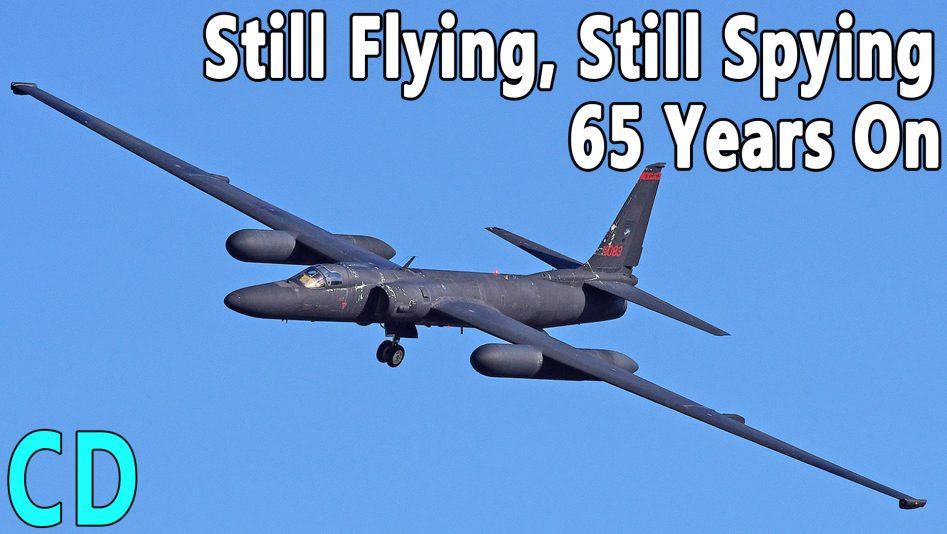 We’ve looked at a couple of iconic planes on this channel recently that seem destined to keep flying long past their original design life including the Boeing B-52 and the Lockheed C-5 but there is one more that you would have thought that would have been made redundant long ago by advances in technology and an ever-changing political climate.

And yet the Lockheed U-2 spy plane has outlived the SR-71 Blackbird, its direct successor and survived the widespread uptake of spy satellites and even surveillance drones like the Global Hawk, so why is it still flying and still spying 65 years on and destined to continue for another 30 years more?

Our sponsor for this video is audible which is something I’ve found really quite interesting.

Just incase you don’t know, Audible is the leading supplier of spoken word entertainment but its not just audiobooks of the latest best-sellers, they cover virtually anything that’s been written, so there are memoirs, business, motivation, science, history but also podcasts, shows, guided fitness, meditation and even sleep tracks to help you rest, all from a single app on your smartphone, tablet or computer. You can also download titles and listen offline, anywhere, anytime so no signal, is no problem.

So why do I like audible and why I think you may well too. Well for whatever reason, I find I have very little free time nowadays, and if I do there is always something that needs doing.

But there are times like when I’m cycling either, spin cycling indoors in the winter or outdoors in the summer where I do have an hour or so where I can’t do anything else but I can listen and for me that’s when audible come into its own and I can now catch up on many the books I couldn’t finish plus much more.

So maybe you commute to work, walk the dog, decorate the house,  there are thousands of audiobooks, podcasts, shows that you could now enjoy when you have those times when you can’t do anything else but listen.

You can try Audible now free for 30 days by going to  Audible dot com forward slash curiousdroid or text curiousdroid to 500-500.

If any plane looked like it was destined to have a short operational life back in the early 1960s you would have thought it would have been the Lockheed U-2.

Its mission was to fly over the Soviet Union at a time when there was no other way to gain intelligence on what they were doing, in particular with regard to the number of nuclear bombers and missiles they were thought to have.

It had been designed to fly at 70,000ft, higher than any previous aircraft and at a time when the main threat was from anti-aircraft guns and cannons mounted on interceptors but still beyond the range of Soviet fighters, missiles and radar.

All of that changed on 1st May 1960 when a U-2 flown by the US pilot Gary Powers was shot down over central Russia by a Soviet Surface to Air missile whilst on a spying mission flying from Pakistan to Norway.

The aftermath was the US forced into an embarrassing climbdown and all U-2 overflights of the Soviet Union were stopped immediately and the use of the U-2 was scaled back so much that by 1966 just 15 of the original 55 U-2’s built in service.

This had shown that the Soviets had greatly increased the capabilities of their Missiles and that 70,000ft was no longer safe. This put the CIA and the US in general into a tailspin and the whole theory of high altitude aircraft was upended and changed to a new emphasis of high-speed low altitude missions for aircraft like the B-52, b47 and b-58 bombers which had been designed for high altitude.

It also accelerated both the Corona spy satellite program as well as the CIA’s A-12 Oxcart which went on to become the SR-71 Blackbird. Both of these were to prove very successful in the continuation of US reconnaissance but more importantly, they were out of reach of Soviet air defences.

So if the writing was on the wall for the U-2 why did it continue to be used. Well, there was nothing around to take its place and the US still needed the vital information.

Overflying at 70,000ft might have been stopped but at that altitude, the pilot can see for 250 miles or 400km in any direction and the U-2 could still fly along the borders of a country and peer deep into it.

Nowadays, It now uses new technology to eavesdrop on electronic communications and advanced multispectrum sensors that can see not only in the dark but through haze and clouds.

But traditional wet film cameras still produce the best quality at above 70,000ft. A typical flight would produce a 90kg, 3.2km long roll of film which has to be developed and analysed by eye.

This is such a huge task because one roll of film could cover an area the size of California with a resolution down 20cm, so that only about 5% of the film can be analysed by human analysts because there isn’t enough time or people to do the job.

So in 2018, the air force trialled a method using A.I. to scan the film to look for things cars, trucks, planes, buildings and even people on the ground and highlight potential targets for further human investigation.

And this brings us on to spy satellites, one of the very things that were meant to make the U-2 redundant. Now as good as they are with the ability to see objects just a few centimetres across from the safety of space, what they can’t do is loiter around and watch for longer periods of time.

They are also predictable following fixed orbits around the earth allowing adversaries to hide when they know they flying overhead. Knowing their flight path makes also them increasingly vulnerable to anti-satellite weapons such as LASERs to blind their optics, jamming and even anti-satellite missiles that could destroy them.

This is where the U-2 still works as well now as it did in the 1950s. Back then with no agents on the ground, the US president needed to know what the Soviets were upto and know quickly. U-2’s could be moved into position within hours and marked the shift from ground-based intelligence of spies and agents to technical intelligence from afar.

One major issue that the U-2 does have is that it’s not a very stealthy aircraft and not that fast, in fact, the Soviets could track them well before the Powers incident but until then they couldn’t get their missiles to lock on or interceptors to fly that high.

All that changed with the Powers incident and that kick-started the development of the plane that was to replace the U-2, the SR-71 Blackbird, an aircraft that flew so high and so fast that even the missiles couldn’t keep up with it.

But all that technology came with a very large price tag as well as technical difficulties. 85% of the fuselage was made from titanium, again hugely expensive, difficult to work with and due to its rarity most of had to be imported into the US, ironically from the place that had the largest reserves, the Soviet Union via CIA front companies. If the Soviets had even gotten wind of it, then that would have spelt the end of the SR-71.

Building them was expensive but running them was even more so. Special fuel called JP-7 had to be developed because the fuselage became so hot when flying at Mach 3 that normal jet fuel could self ignite in the fuel tanks. JP-7 had a much higher flash point and could withstand the 150C that it would reach, in fact as the fuel went down in the tanks it was replaced with nitrogen to help stop ignition as well.

This meant that the SR-71 had to have a dedicated fleet of KC-135 tankers set up to handle the JP-7. When it was on the ground the loose fit of the titanium panels which was required because of the large expansion and contraction cycles meant that every one of the SR-71’s leaked fuel to the extent that there would be a large fuel stain on the ground under the aircraft.

Luckily because of the high-temperature nature of JP-7 makes it was very difficult to ignite. In fact to start the engines they used shots of the highly toxic and dangerous hypergolic fuel, triethylborane (TEB) which ignites on contact with air.  It’s said that you could drop a lit match into a bucket of JP-7 and it wouldn’t ignite.

Getting an SR-71 into the air was also far more complicated and took many hours of preparation, more like a space launch than a normal take-off.

Now you would think that by 1980 with the SR-71 ruling the roost that the U-2 would be dead in the water but no, the U-2 was brought back into production which was difficult because many of the original engineers and technicians from the 1950s had retired.

The new version had a nearly 40% bigger body, more powerful engine and modular construction to allow for more and heavier equipment and also allow it to be swapped out depending on the mission. But it hasn’t stopped there and upgrades have kept on coming and as of 2020 there were still 33 of the later U-2’s still in active service.

Although they were made in the early 80’s they still have about 80% of their design service life left.

Thanks to the modular nature of the newer versions, the U-2 of today can fly twice as far for three times as long as the original version and in 2020 had another significant sensor upgrade and can cover other advanced equipment including synthetic aperture radar, signals intelligence electronics, and communications gear. Its also used as a test platform for new technologies both highly classified and science-based for the likes of NASA.

The U-2 helped pioneer the use data links between satellites and ground forces when the line of sight is lost and this can now also allow its sensor data to be shared with other advanced aircraft like the F-35 and F-22 and the rest of the digital battlefield.

And this is where we get to the main point of the U-2, a 65 year old design, created shortly after the second world war. It can still do the job is was designed for as good as or better than many newer systems for a lot less money and it’s here now and working with a long track record of success, so why not continue.

With the sky-high costs of developing a replacement, the very long development times and all the issues which have seen to bedevil previous attempts, it hardly surprising that like that other post-war design stalwart the B-52 with the latest round of updates there is no retirement date planed so we can expect to see the U-2 on the books for at least the next 30 years.

So I hope you enjoyed the video and if you did then don’t forget to subscribe, thumbs up and share and I would also like to say a big thank you to all our Patreons for their ongoing support.