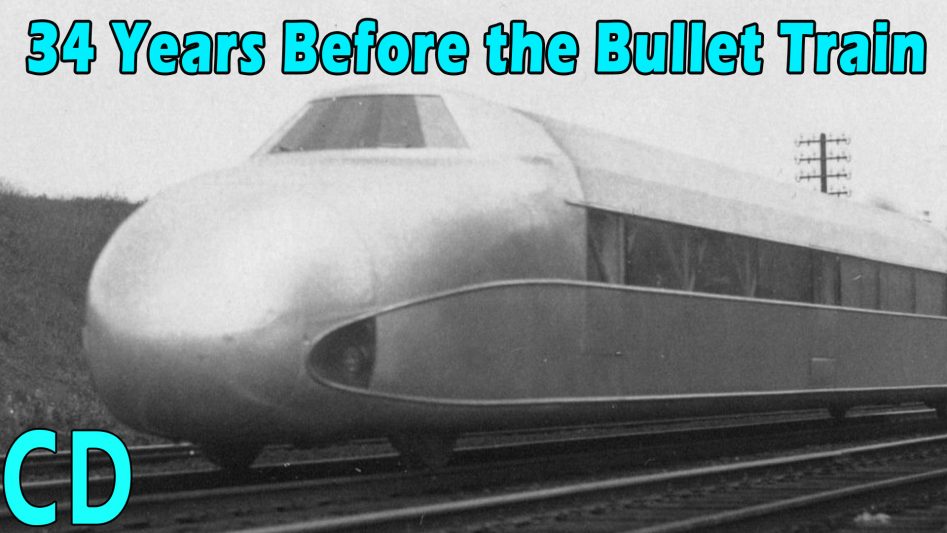 Planes, trains and automobiles, well if we leave out the automobiles, we’ve seen a few variations on the theme of how trains have been powered from steam, to diesel and now electric but there was a time when several experimental trains used engines from planes as there main propulsion, so this is a look at the very rare and futuristic aerotrains and why to excuse the pun, they didn’t take off.

Now look at these two trains, on the left is the original Japanese Shinkansen 0 Series aka the Bullet train  which entered service in 1964 with a top speed of 130 mph or 210km/h. So you ask what is the one on the right.

Well, that was the German Schienenzeppelin or rail Zeppelin and that was debuted in 1930 with a top speed of 143mph or 230km/h, 34 years before the Shinkansen.

But of course there is also something majorly different between them besides 34 year age gap. If we pull the picture out you see that not only is the Schienenzeppelin just a single rail car but its also powered by a propeller and aero engine on the back of the railcar.

Now this wasn’t the first attempt to power a train with a propeller, in 1917 the Soviet engineer Valerian Abakovsky created the Aerowagon, an experimental high speed rail car powered by an aero engine and propeller. This could travel at upto 87 mph or 140km/h and was designed to carry soviet officials.

However, in 1921 things didn’t go too well for it. After a successful test run from Moscow to Tula with several foreign delegates onboard, the Aerowagon was on the return journey back to Moscow when it derailed at high speed killing 7 of the 22 people onboard including its creator Abakovsky, putting a rather abrupt stop to the project which was cancelled shortly afterwards.

The idea was then taken up eight years later in 1930 by the German aero engineer Franz Kruckenberg when he created the Schienenzeppelin for the German Imperial Railway Company – Deutsche Reichsbahn.

Kruckenberg was inspired by the aerodynamics from the then-current zeppelin airships and the Schienenzeppelin was constructed with a lightweight aluminium aircraft-style body to reduce its weight to just 20 tons. At just over 25 meters long the railcar ran on two axles and the power came from two conjoined BMW 4 six-cylinder aircraft engines driving a 4 bladed propeller, though later this would be changed for a single 600hp 46 litre BMW 6 V-12 aero engine driving a 2 bladed prop which was tilted down by 7 degrees to provide some downforce.

In the interior there was room for 40 passengers on board which was done in rather minimalist Bauhaus style.

Now as a concept, it looks good on paper but it doesn’t take long to see the major flaws. The most obvious is the large open propeller spinning at high speed that would be only a couple of meters away from people on a train platform as it pulled in to and out of a station. The noise and thrust it generated  would also kick anything that was not fixed down, dust, rubbish, signs and track ballast.

Going backwards was dangerous because of the open prop and couldn’t easily tow carriages again because of the prop. It also had trouble going up steep inclines as the airflow separated when full power was applied and just to add the cherry on top the cake, the standard railway lines themselves were just not upto the demands of sustained high-speed travel.

So after the record-breaking run it was modified and the propeller was removed and a hydraulic drive was fitted to a new powered front bogie but this lowered the top speed to 110mph or 180km/h.

However, by 1932 the Deutsche Reichsbahn had gone off without Kruckenberg and developed a new streamlined two-car trainset which became known as the Hamburg flyer or the flying Hamburger which became the first fast diesel-electric powered train in Germany.

The Schienenzeppelin fared less well and with the competition from the Deutsche‘s other high speed efforts it was eventually scrapped in 1939 to supply metal for the war effort.

But it wasn’t forgotten, the lightweight streamlined design was years ahead of anything else and would influence high-speed train design decades after the Schienenzeppelin had been scrapped.

Now you may have thought the after the Schienenzeppelin, trains powered by aircraft engines wouldn’t have made past the design brief let alone into construction but that didn’t stop the Americans from having go but this time with a jet-powered railcar.

The idea came from the Tech centre of the New York Central railroad to see if they could develop a high-speed train for city to city use. Using jet engines was the cheapest and easiest way to gain the 10,000 hp required.

The idea was presented to Alfred Perlman, the president of the New York Central in 1965 and discussed but then shelved.

Then about a year later the director of the tech centre, Jim Wright got a phone call from Perlman saying the project had been given the go-ahead but it had to be done in 30 days… and to make it happen he was effectively given a blank cheque to use what ever resources with in the company to get it done.

They started with a 13-year-old Budd RDC-3 self-propelled railcar, number M-497. The engines were disconnected from the wheels, several rows of seats were removed for the jet mounting structure, new jet fuel tanks were fabricated and fitted and over 50 different instruments installed to measure stress, temperatures, vibrations etc make it a rolling laboratory.

The engines were a pair of surplus GE J47-19’s plus their mounting pod which had originally been used as boosters for the B-36 Peacemaker nuclear bomber.

The engines and pod was mounted upside down on the front of the railcar and inclined 5 degrees downwards to give greater downforce. Then finally a fairing which had been wind tunnel tested was added to the front and the dark paint job gained it the name of the “Black Beetle” by the press.

Don Wetzel, Jim Wrights assistant and the project manager was chosen to pilot the train because he was not only a qualified locomotive engineer but also had been a pilot in the Marine Corp and was familiar with jet engines.

The test run was to be done over a weekend on the 23-24th July 1966 on a section of track between Butler, Indiana, and Air Line Junction, Ohio where the track was straight and there was a four-mile section of continuously welded rail.

Over the two days, various runs were done culminating in a top speed of 183.85 mph or 295.85km/h, though Don said that on that run, it had gotten away from him and hit over 190 mph and he was decelerating through the timing gate.

Although this was just a concept it was seriously looked at to power future trains but modifying all the automatic signals to work at over double the 90mph limit they used at the time, together with the problem of low bridges, noise, debris and ballast blown up by the jets meant much more money would be required to ready the track and station infrastucure than just creating the jet railcars themselves.

There was also the issue that at under 300mph or 480km/h the jet engines were very inefficient and used far more fuel than a standard railcar.

After the tests, it was converted back to a normal railcar and went back to working the commuter lines until 1977 when it was retired and sat in sidings until it was finally scrapped in 1984.

Meanwhile, in 1970 in the Soviet Union an experiment studying wheel pairs and bogies at speeds above 160km/h required the building of a laboratory railcar. To remove the influence of the wheels being driven, the power would come from a pair of jet engines mounted to the roof similar to that of the US Black Beetle.

A traction car from an ER22 electric train was converted with a pair of AI-25 jet engines from  YAK-40 passenger plane. Originally it was due to use the RD-45 engines from a MiG-15 fighter but at 900kg each they were too heavy so they switched to the lighter 400kg AI-25’s

Farings were added to the front and rear and the wheels were covered. During wind tunnel testing 15 variations were tried with the best one achieving a drag factor of 0.252, as good as many high-speed sports cars. Tests started in 1971 and in 1972 it reached a top speed of 249km/h or 154mph.

The program ran until 1975 with the results used to build the experimental RT200 high-speed passenger cars and the ER200 high speed electric train.

Again like in the US, the possibility of using jet-powered trains was considered but along with the similar issues that the Americans found, the Soviet thought that the stations and tracks would need to be built like airports and away from residential areas because of the noise.

After the tests were complete the jet railcar was left to rot in siding for years. It was going to be moved to a railway museum in St. Petersburg but was in such a poor state of repair that just the front of the car with the engine pods was cut off, renovated and placed outside of the TVZ carriage works where it was originally built.

With the advances of electric trans in the 1980s and beyond the idea of jet-powered trains was dropped because it was just not enomically viable to build the infrastructure to support them and to put up with all the issues of noise and jet blast they produced. So I hope you enjoyed the video, and if you did then please thumbs up, subscribe, click the bell and share.