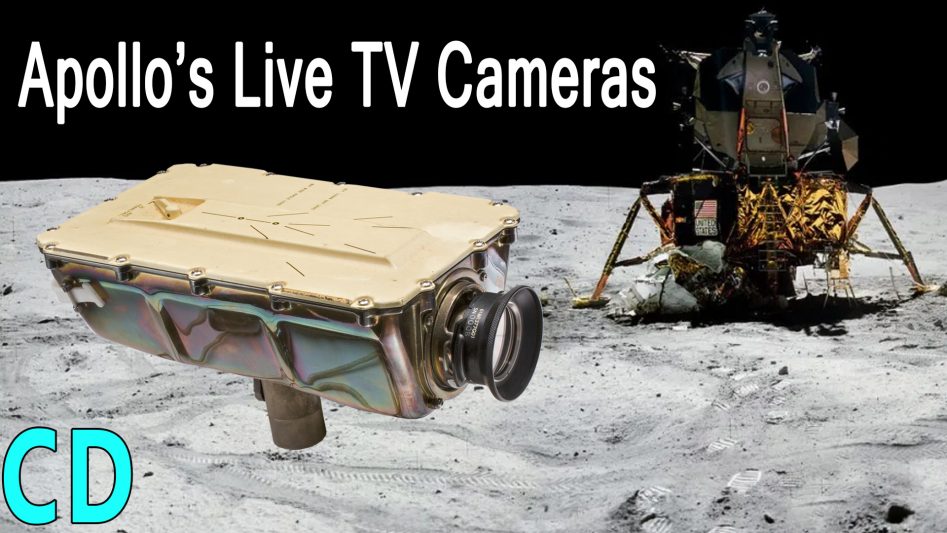 The fateful first steps of Neil Armstrong on to the lunar surface and his immortal words, “That’s One small step for man, one giant leap for mankind” was broadcast to a worldwide audience of about 600 million and yet it was touch and go as to whether it would be broadcast live at all.

Some at NASA thought that it was not scientifically important, the mission would work perfectly well without it and therefore would be a waste of weight, power and transmission bandwidth, not to mention the challenge of getting the signals back to the Earth.

Luckily some people in NASA were more switched on to the fact that a broadcast like this would be a worldwide PR goldmine and allowing the US tax payers who were footing the bill to see where their money was going.

One of those more enlightened at NASA was the commander of the lunar module Neil Armstrong, and as the commander, he would have the final say if a live TV camera would or would not be used on the landing, the rest they as say is history.

But Agreeing to use a live TV camera is one thing, getting it to broadcast live a signal back earth is another. This is the story of the live TV camera’s that were used on the Apollo missions.

In this day and age of tiny high definition video camera’s in virtually every smartphone, tablet, and laptop, it’s sometimes hard to believe but at the time of Apollo in the 1960’s TV camera’s were big bulky power-hungry devices usually reserved for TV studios that were wheeled around on pneumatic or hydraulic pedestal and that’s without the racks support electronics all using vacuum tubes.

NASA had used film cameras to get the high-quality footage we see of the missions, but that wasn’t available until after the mission was over and the film had been returned to earth and developed.  Television on the other hand would give a nearly real-time view of what was happening in space and the 384,000 km to the moon.

But getting a TV camera small enough, light enough and with very low power consumption was going to be a difficult task especially considering the NASA specification it had to work with for the Lunar lander. This would also create a technology fight as to who’s system would be used to get live TV from the Apollo missions.

The camera had to weigh no more than 6lb or 2.7kg and consume no more than 7 watts, that’s about the same as a standard USB phone charger we have today, the slow ones that take hours to recharge your phone.

Because it would be used outside the spacecraft in the vacuum of space as well as inside, they had to withstand a temperature swing from -157 C in the shade to + 127 C in the sunlight, something that could happen in seconds just by going into and out of the shadow of the spacecraft.

The final hurdle was the transmission, Although NASA had enough bandwidth to send nearly full 4-5Mhz 525/60 NTSC video back from both the command module and the lunar lander they also had to share it with data, telemetry and voice communications. To assure a good signal to noise ratio when transmitting from the moon with a small antenna and a host of other unknowns as this had never been done before they limited it to just 500khz or 0.5 Mhz

This was a none standard slow-scan format that would need to be converted before it could be sent out to the worlds TV and would not work well with fast-moving images but they figured that subjects like the astronauts in space or on the moon wouldn’t be moving very fast so that would be acceptable.

A digital transmission system was also tried but that used 20Mhz of bandwidth because at the time there were no compression algorithms or computers fast enough to use them even if they existed.

For the Apollo program, NASA contracted RCA to make a camera for the Command module and Westinghouse to make one for the Lunar lander. Although Westinghouse was better known for things like cookers, fridges and TV’s they also made hardened electronic equipment for the Military including small monochrome TV camera’s for ships and helicopters, they were also one of the first companies to make their own custom integrated circuits.

The RCA camera was the first to be developed and used on Apollo 7 and then every mission apart from Apollo 9. The first few transmissions were in black and white and although the image quality directly from the camera signal which was recorded separately to the signal which went for transmission wasn’t too bad by the time it had been converted up to the 525 line 30 fps and sent over analogue transmission lines and satellite links for domestic broadcast the picture quality had degraded quite a lot.

This would highlight another issue in that at the time the methods for conversion from one TV format to another were very basic. The initial process which NASA used to convert the slow scan signal to broadcast format was simply to point a normal studio TV camera at the screen showing the Slowscan images from Apollo and then rebroadcast that. On later missions, this was changed to a dedicated RCA scan convertor.

The camera for the lunar module and moon landings was built by Westinghouse who used their military knowledge and experience to create a camera that was far more capable than any existing conventional image orthicons and vidicons tubes. The type of camera tube they used was secondary electron conduction or SEC tube.

Basically, this was a photomultiplier or image intensifier. It had excellent dynamic range, that’s the ability to view both very bright and very dark objects at the same time without overexposing the image, ideal for the very bright conditions on the moon. It was also very sensitive and could see in very low light conditions. The only problem with this was that it could not be pointed directly at the sun even when it was turned off, if it was it would instantly destroy the tube sensor.

There was also the problem in that the tube used an 8kv supply. In the vacuum of space this high voltage could leak and create an electric arc, though it would be invisible because the arcing we see is the plasma created by the breakdown of the air. So new special alloys had to be used for the electrical contacts to avoid this.

On Apollo 11, the camera was fixed in the Modularized Equipment Stowage Assembly which was deployed when the lander had touched down. This was set up to allow the shot of Armstrong stepping off the ladder and uttering his immortal words to be seen by the world on live TV.

The camera was then picked up and placed on a tripod away from the lander so that it could show the astronauts moving around and placing the flag. There was no way to show the departure from the moon because the camera was connected to the lander by a cable and the antenna was on the ascent stage which cut the connection to the camera at lift off.

It wasn’t until Apollo 15 and the lunar rover which had its own antenna could the departure be seen and followed on a live broadcast.

In the early to mid 60s, colour TV was still limited to the few people who could afford them and the few stations that broadcast colour transmissions so there wasn’t much thought put into broadcasting a colour signal from Apollo back to earth.

But by the time of Apollo 10, in 1969 colour TV was more widespread but the studio cameras were large and heavy using 3 or 4 camera tubes, one for each colour channel red, green and blue and a fourth for luminance, still far too large to be used in a spacecraft.

Westinghouse developed a colour system that could be fitted to it’s existing monochrome camera tube using an idea which had been developed in the 1940s by CBS engineer Dr. Peter Goldmark, something which CBS and Westinghouse clashed over, with Goldmark & CBS claiming credit for colour system and camera, even though Westinghouse only used the colour wheel, the rest was their own design using electronics which were not available when Goldmark developed his version.

This synchronised colour wheel had specially shaped red, blue and green filters which were advised by the CBS engineers to allow the correct amount of light in. It spun in front of the camera tube at precisely the correct speed to create a sequence of red, blue and green fields which when combined in the same order recreated a good quality colour picture at the receiving end.

This would create a relatively simple to use small, lightweight low power camera ideal for use in space and on the moon. The non-standard 405 lines/ 144 field sequential colour format wasn’t a problem either because none of the NASA formats was standard and would still need converting before they could be broadcast.

Although Westinghouse had shown their colour camera to NASA before Apollo 11 it was too late to get it on the first moon landing, so the world saw the live footage in Black and & White.

The first live colour broadcast occurred on Apollo 12, though things didn’t go too well for the camera. The camera was accidentally pointed at the sun by Astronaut Alan Bean as he carried it from the Lunar Module which instantly destroyed the SEC tube, terminating the live broadcast.

Although the picture quality on Apollo 11 was degraded due to the conversion process and multiple broadcast steps, the ghostly images of Armstrong and Aldrin on the moon seemed to match the otherworldly image of the moon in the public eye. Some said that if it had been in studio quilty it would have seemed less believable than the rather lo-fi monochrome version the public saw.

Few people outside of the technicians working at the receiving stations saw the raw Slow scan TV signal directly from Apollo. These were the highest quality and recorded on to analogue telemetry data tapes as the signal was being converted to NTSC for broadcast around the world.

However, at some point it was believed in the 1980s, they were erased and reused for the Landsat program which was facing severe tape shortage. Because the lower quality broadcast versions were widely copied around the world no one thought much about the recordings of the higher quality Slow scan TV until much later when people started looking for them, something which has fueled many a conspiracy theory since.

RCA wanted to be involved with the moon landings and had spent a lot of time & money creating backwardly compatible colour TV standards for the US broadcasters and were rather upset that NASA chose Westinghouse and a sequential colour camera that was not compatible with the RCA system.

Although Westinghouse eventually lost the contract to RCA for the colour cameras, when the deployment of RCA rover camera was shown back on earth it was done with a Westinghouse camera.

In the end, Dr. Peter Goldmark was very pleased when the first colour images were sent back from Apollo using a camera based on the same principles he had developed back in the 40s.

So I hope you liked the video and if you did then please, thumbs up, click the bell notification, subscribe and share and don’t forget Patreon supporters get ad-free versions before they go public on Youtube.