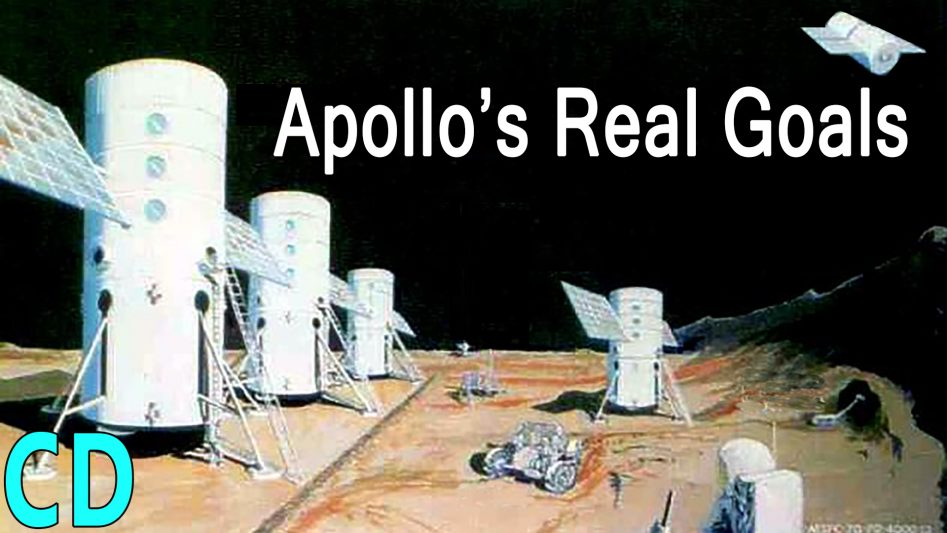 We all know what the major goal of the Apollo program was, to put a man on the moon by the end of the 1960s basically to beat the Soviets and prove that the capitalist system was better than the communist one.

But once that’s done what would happen the hardware, the rockets, spacecraft and technology that had been developed, not to mention the 400,000 workers that helped build them, it would be a waste not to capitalize on gains they had made and make the most of the $25 billion that would have been spent.

The Apollo Applications Program was what the planners including Werner Von Bruan hoped Apollo would lead on to once the initial moon landing had been completed. This was still an early time for space exploration and as we saw in a previous video about Skylab, we may well have gone to the moon but we didn’t really know how to live and work in space for long periods.

The Apollo Applications Program would take what had developed and run with it to help develop our abilities to not only live in space but also on the moon. In 1965 there were two possible routes depending on how the funding would hold up.

The first “Case 1” scenario was that there would be no further Saturn Apollo hardware ordered past that of the moon missions. Even with these limitations, the Saturn Apollo Office thought there would 21 Saturn 1B launches, that’s the shorter version without the main 1st stage that sat on the milk stool launch pad and would be used for lighter loads and 15 full-sized Saturn V launches by the end of 1973.

The second “Case 2” scenario would see an extensive utilization of Saturn Apollo capabilities, with an earlier focus on a post-Apollo national space objective, these extra launches would interleave between the moon landings and other missions.

These would include using the fuel tank of the upper stage of a Saturn V rocket as a wet workshop. Once the fuel in the tank was spent, instead of just jettisoning it they would vent any fuel left into space and then use the interior as a habitat and workshop. This idea would be later used for Skylab, though that was a dry workshop as it was purpose-built for the task never used as a fuel tank in space.

There were four planned phases to the moon landings.

Phase 1 was from 1969 to 1971 which would land the first men on the moon and build up experience over the four missions. These missions corresponded to Apollo 11 to 14.

Phase 2 from 1972 to 1973 would be the Lunar Exploration Phase, these missions would stay for longer durations and bring larger payloads including the Lunar rover, these ended up corresponding to Apollo 15 to 17.

Phase 3 was pencilled in for 1974 and was a lunar Oritbal Survey mission which would be a bit like Apollo 8 but with two astronauts instead of three and with just the command and service module without the Lunar Module.

This would enter a polar orbit around the moon for 28 days and observe the whole of the surface with a suite of instruments including film cameras, a magnetometer, a radar altimeter, a gamma-ray spectrometer, and micrometeoroid collection plates in the service module. This job would eventually be done in much greater detail and for much longer by the Lunar Reconnaissance Orbiter robotic probe starting in 2009 and is still going today.

Phase 4 would be from 1975 to 1976 and would be the Lunar Surface Rendezvous and Exploration Phase and would consist of a dual launch mission. The first would deliver a modified Lunar Payload module or LPM to the surface of the moon, basically a Lunar module but without the ascent engines and associated parts and fuel tanks to give it a greater payload capability including food and scientific equipment. This would act as a shelter for when the astronauts arrived up to 3 months later.

It was envisioned that over time this basic setup would evolve into a lunar base with larger shelters powered by a nuclear reactor with long-range rovers and up to six men staying for 6 months or 180 days at a time.

Another plan was a manned flypast of venus with a Saturn V used to send a three-man crew which would flypast in the Command and service module attached to the second stage fuel tank of a Saturn 1B. Once the fuel had been used, the tank would be used as a wet workshop where the crew live on the return journey before separating and returning to Earth.

But these Apollo Application Program missions were contingent on the funding which was around $450 Million per year being supported by congress and to keep congress happy NASA have to deliver on what they had planned with no major hitches.

This is where a massive spanner was thrown into the works with the Apollo 1 fire on January 27th, 1967 which claimed the lives of astronauts “Gus” Grissom, Ed White, and Roger Chaffee during a plugs out test, basically a full simulation test of a launch but without fuel in the rocket. This was a huge blow to Apollo and would lead to a major overhaul of the whole program but some say that it was a blessing in disguise.

The reasoning behind this is that NASA had been racing to keep to the deadline of putting a man on the moon by the end of the 1960s and had taken what some say were unacceptable risks to cut corners and costs.

The Apollo 1 Command module was an early design that relied upon a low-pressure pure oxygen environment in space to save weight and complexity compared to a nitrogen/oxygen mix more like we breathe on earth.

The hatch door also designed to open inwards, so as the fire took hold the pressure in the cabin increased making it impossible for the crew to open the door from the inside.

To some in the space industry, this was an accident waiting to happen and that if the Apollo 1 test had worked and the program had gone ahead with this original design, this kind of accident would probably have happened during a real launch with the subsequent loss of the crew and vehicle.

From that standpoint, it would have been much harder if not impossible to try and find the root cause and could well have ended the program there and then.

In fact, we still don’t know exactly what triggered the fire in the command module apart from the “most” likely cause was a short circuit in a bundle of wires. One saving grace was that it happened during a test when it was on the launchpad so the command module was still intact and could be gone over in exacting forensic detail.

The fire delayed the program for 21 months in which time there was a major redesign of the command module and other systems and a shake-up of NASA’s working practices that had a much greater emphasis on safety and fire in particular.

But all this came at the same time as the cost of the Vietnam war was spiralled upwards and President Lyndon Johnson wanted to introduce his version of Roosevelt’s New Deal called the Great Society, a set of domestic programs to quell civil unrest by eliminating poverty and racial injustice and keep within a $100  billion budget.

With all these competing interests and congress’s displeasure with NASA’s performance around the Apollo 1 fire, it meant that it was on the top of the list for budget cuts. They couldn’t cut the whole program because that would renege of the promise that President Kennedy had made in 1961 but what they could do was to put a halt to the post-Apollo Applications Program by cutting by effectively cutting its budget from $450 Million to $122 million, a slide which continued under President Nixon in 1970.

The scheduled Apollo 20 was cancelled and its Saturn was redesignated to launch Skylab which would become the focus for NASA’s post-Apollo plan until the Space shuttle was meant to come into service in 1979, though that eventually turned into 1981.

Further reductions came as the Lunar orbital survey was cancelled and the moon missions were cut short with the cancellation of Apollo 18 and 19 leaving Apollo 17 as the sixth and last Apollo manned mission to the moon.

Two more Saturn rockets were used on the following Skylab missions and one on the Apollo Soyuz mission where the American Apollo Command and service module docked with the Soviet Soyuz capsule in 1975 and the handshake between the two crews seemed a fitting end to the Space race which began 18 years earlier with the launch of the Soviet Sputnik 1.

So I hope you liked the video and if you did then please, thumbs up, click the bell notification, subscribe and share and don’t forget Patreon supporters get ad-free versions before they go public on Youtube.