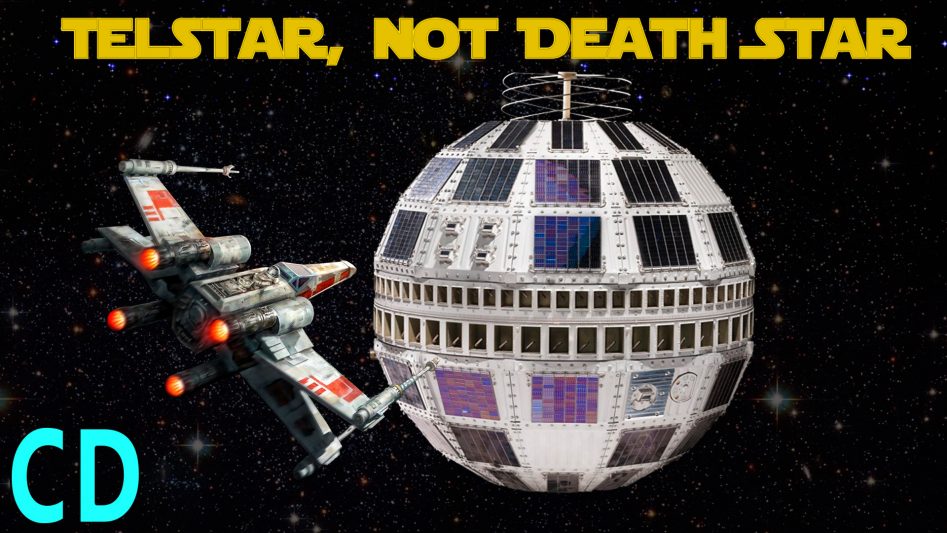 I may look like a prototype for the Death Star but this 77kg satellite from 60 years ago changed the world in a very much more real way.

This is Telstar 1, the world’s first privately funded active communications satellite to be used by public broadcasters to transmit telephone, television and computer data  signals across the Atlantic to Europe and paved the way for satellite TV, Sports TV and the always-on 24/7 news cycle from anywhere in the world that we have today, so in a very real way, it shrank the world.

Although privately funded by AT&T to the tune of $50 Million, it would be the US government that ultimately caused its demise just 7 months after its launch with one of the most controversial nuclear tests of the cold war.

So, in this video we look at Telstar 1 and how it changed the world and the legacy created for us today.

There are numerous claims as to where the idea to use satellites as communication tools came from, and as far back as 1923, Hermann Oberth, described the geostationary satellite, an idea first put forward by Konstantin Tsiolkovsky and in 1928 when Herman Potočnik discussed sending radio signals between the ground and satellites.

But it was in 1945 that Arthur C. Clarke put forward the idea to the editor of Wireless World magazine of using a satellite to relay signals from one point on the earth to another, eliminating the problems of crossing the oceans and as early as 1946, scientists in the United States and Hungary bounced radar waves off the Moon for the first time.

John R. Pierce, an engineer working at Bell Labs, gave a speech about the communications satellites to the US Airforce in 1954 and said that various ideas were floating around but he hadn’t heard of Clarke’s article at the time. Pierce would later go on to work on Project ECHO and Telstar 1.

This used the body of the launch vehicle as the satellite, a 24.3 metres (80 ft) long, 3.1 metres (10 ft) diameter Atlas missile and its job was to prove the concept of relaying signals from one point on the earth to another as well as show that missiles could be used to launch payloads into space and show the U.S. was on par with the Soviets after the launches of Sputnik 1 and 2.

It even broadcast a 30-second Christmas message via shortwave radio from U.S. President Dwight D. Eisenhower from an on-board tape recorder.

At the time, Bell Labs was the leading research institution into long range communications and had pioneered many of the technologies used including microwave relay stations for phone and TV signals but there was a problem in that whilst was easy to do on land when it came to the oceans there was no way to place a string of relay stations in the middle of the Atlantic, let alone the Pacific.

John Pierce who was by now the lead designer of Telstar 1 had also worked on project ECHO in 1960 which was a 30 meter diameter metalized balloon which was placed in to orbit and acted as a relay by reflecting the microwave signals from one ground station back to another.

Whist this worked, it became clear that a more powerful active relay would be needed like the previous SCORE satellite but also something much smaller and more sophisticated with a stabilised position as the ECHO balloon was pushed out of it location by the solar wind.

Telstar would use many on the inventions that Bell Labs had recently pioneered and be much, much smaller than SCORE at just 78kg in weight and 87cm in diameter.

Telstar was as much a test platform as it was a commercial operation. It was originally intended to conduct experiments in telephony, data transmission and single-channel television.

Even thought it was not primarily designed for two-way telephone calls, it could handle up to 60 simultaneous conversations. As it was the first true active satellite, it also explored techniques for accurately tracking a moving satellite and how well the ground station equipment worked in real world operations.

It would also measure the condition of some of its own electronic equipment under the stress of launch and in space, as well as measuring radiation levels in space, something that was separate from its communications role and that would also see its ultimate demise.

Telstar was built at Bell Labs Hillside location in New Jersey. Its body was a magnesium frame with an aluminium shell. On the outside it had 3600 sapphire coated solar cells mounted in Platinum which charged up 19 Ni-cad batteries which were needed because the cells could only generate 14w of power but is maximum power requirement was 35w.

Inside it had over discreet 1000 transistors, with its subsystems encased in foam to reduce vibration.

The microwave antennas for receiving at 6Ghz and transmission at 4Ghz consisted of a large number of square and rectangular ports around the equator of the satellite, this was because Telstar was spin stabilised and needed a continuous ring of antenna ports to work from any angle as it spun.

The received transmissions were frequency shifted from 6 to 4 Ghz and amplified by a travelling wave tube. The total output was just 2.25w which by the time it was received on the ground was just 1 billionth of watt and needed amplifying 10 billion times before it could be sent on.

On the 10th July 1962 Telstar 1 was launched a top of a Thor-Delta rocket to an elliptical orbit with a minimum distance of 965Km and maximum of 5600 km, orbiting the earth once every 2h 40 minutes and was spin stabilised, rotating at 180 rpm.

As there was only one Telstar and it was in a non-geosynchronous orbit, there was an approximately 30-minute window as it passed between the transmitter and receiver.  The receiving stations had to track it to within 0.06 degrees as it moved across the sky at up to 1.5 degrees per second.

As the signal was very low, the receiving antennas had to be huge. Bell engineers designed a large horizontal conical horn antenna with an aperture size of 330 sq meters which was located at Andover, Maine. The European ground stations were at Goonhilly in Cornwall in England and  Pleumeur-Bodou in Brittany, France.

Telstar 1 relayed its first, and non-public, television pictures of a flag outside Andover Earth Station to Pleumeur-Bodou in France on 11th July, 1962.

On 23rd July, Telstar made history by televising a live broadcast of JFKs press conference to Europe and as a filler part of a baseball game was also sent, this was picked up and rebroadcast to 16 European countries. Later that day the French sent a recording of the popular singer Yves Montand and then the British also sent a transmission of the engineers at Goonhilly talking about their work and congratulating their US colleges.

Later that evening it relayed a phone call from the Chairman of AT&T Frank Kappel in Andover to the Vice President Lyndon Johnson in Washington DC in front of the worlds press.

As well as sending TV and telephone signals across the Atlantic, Telstar allowed the synchronisation of time between the two continent’s to be matched within 1 microsecond, the previous best attempt was 2000 microseconds.

It also sent computer data between two IBM Mainframes based in Endicott, New York to Andover and Later to France.

As part of its scientific studies, its orbit would take it through the Van Allen Radiation belts, here it would monitor the radiation levels and send back the results.

However, this became a major problem when the US conducted operation Starfish prime, the largest nuclear explosion in space.

On the 9th July 1962, the day before Telstar was launched, a Thor rocket carrying a W49 thermonuclear warhead with a 1.4 Megaton device was exploded at an altitude of 400km.

Although most of the high energy electrons had a half-life of just a few days what they didn’t know at the time was solar and cosmic particle fluxes varied by a factor of 10 and with a few months had created a new set of man-made radiation belts, which was intensified by later US and Soviet nuclear tests in space though which Telstar flew through on a regular basis.

This was something was not envisaged or planned for and the fragile transistors inside Telstar began to fail.

Firstly, the command channel was affected and began to work erratically, so the satellite was switched on continuously as a work around. Then on the 23rd November the command channel stopped working. On the 20th December they managed to get it working again until the transmitter finally died on the 21st Feb 1963.

Soon after on May 7th 1963, Telstar 2 was launched to continue the tests and broadcasts which was an almost copy of Telstar 1, this lasted for two years without any failures until it was stitched off on 16th May 1965.

By Now Telstar’s place in history was assured and there have been 23 satellites which have used the Telstar name right up until Telstar 19V that was launched in 2018.

Telstar created the first networks that linked people, countries and even computers around the world in real time that had never been done before and lit the blue touch paper that led to the explosion connectivity which we have today with over 2,224 communications satellites in orbit around the Earth as of the 1st of Jan 2021, not to mention the satellite constellations like Starlink.

Telstar 1 may well have stopped working 60 years ago but its still in orbit around the earth and if you know where and when to look it can be seen with binoculars and there is a link to a live feed of its position in the description.

So thanks  for watching and I hope you enjoyed the video, don’t forget to click that bell notification, share and subscribe and a big thanks to all our Patreons for their ongoing support.