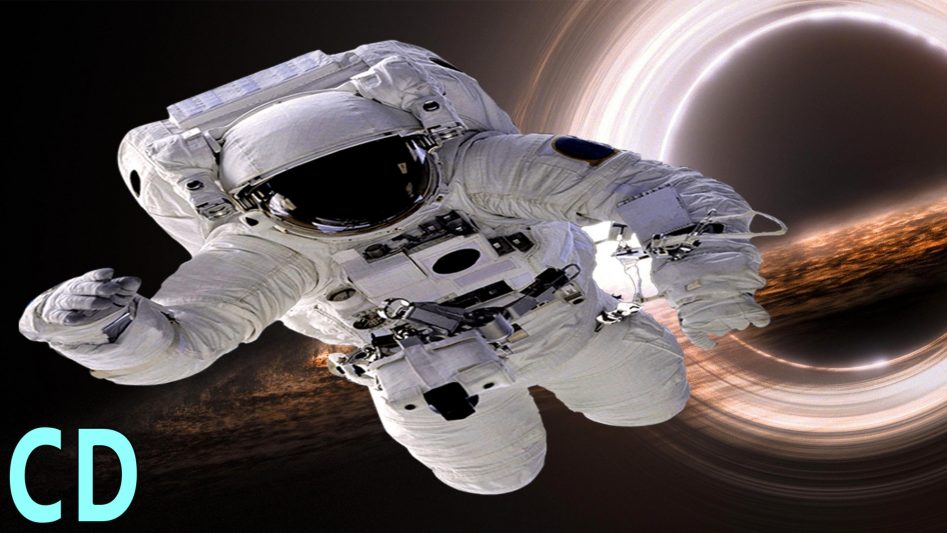 Imagine we are at some point in future on a mission to study black holes and orbiting near the photon sphere, an area just far enough away where photons of light travel fast enough to settle into an orbit and don’t get pulled into the event horizon.

However, through no fault of their own, an astronaut finds themselves outside the spacecraft and pulled towards the event horizon. The ship and crew can’t move in to help because they can’t risk being pulled in too.

After the initial panic, our astronaut becomes resigned to the fact that this will be a one-way journey. They will still be in radio contact with the main craft until they reach the event horizon but once over it, how long will our astronaut survive, a second, a minute, an hour, or forever? Well, let’s see what our current thinking tells us about the matter.

As with anything to do with space, black holes and Einstein’s theory it’s all relative. How long our unlucky astronaut might survive in a place where our current knowledge about space and time collapse just like the dying star that created it, it’s always going to be speculation although some of the latest theories pose some interesting outcomes, none of which would be particularly helpful to our astronaut though.

Now contrary to what you may think that black holes are a 20th-century phenomenon, something that we have only thought about since Einstein’s theory of relativity, in 1784 some 238 years ago, the English natural philosopher John Michell proposed that there could be natural bodies in space, some form of star, whose mass could be so large and the gravity they exhibited could be so great that even if they produced light, it could not escape and would fall back to the surface.

He called these “Dark stars” and even suggested that they could be found by tracking their gravitational effects on the orbits of nearby normal stars. This was a remarkably accurate prediction from over 2 centuries ago and something that was only recently been confirmed in 2015 by the discovery of a supermassive black hole now called Sagittarius A star at the centre of the Milkyway by the Chandra X-ray telescope and a group of stars apparently orbiting empty space which gave away its location.

John Michell was so far ahead of the curve on black holes that he was mostly ignored by his contemporaries and it wasn’t until the 1970s that his writings were rediscovered.

Of course, much of the technical details of how they worked were wrong but it would be Albert Einstein 131 years later and his theory of general relativity that give us a framework with which to understand the barely believable idea of holes in space and time.

In fact, it would be Karl Schwarzschild working on Einstein’s field equations of general relativity in 1915 who came up with the Schwarzschild metric that describes the gravitational field outside a spherical mass.

A Schwarzschild black hole, which is often termed as the most basic type, namely non-rotating and non-charged and is characterized by a surrounding spherical boundary called the event horizon which occurs at the Schwarzschild radius.

It’s the event horizon that’s key to how long our luckless astronaut may survive but the thing is he or she probably won’t even know when they have crossed it, there would be no sensation, its not hard and fast physical boundary just a mathematical one where the flow of space towards the black hole becomes faster than that of the light in it and therefore light is carried away just you would be if you were in a fast flowing river, no matter how fast you swam you could never make your way back upstream.

How things fair for our astronaut would depend on how big the black hole is, this will determine how strong the tidal forces are.

The strength of gravity is inversely proportional to the square of the distance away between two  objects. When we stand on the earth, our feet are nearer to the centre of the earth than our head, so our feet are pulled very slightly more than our heads.

That difference in the strength of gravity between two points, in this case, our feet and our head is called the tidal force. Its the same force that moon exerts on the Earth, the difference in the strength of the moons gravitational pull from one side of the earth to the other causes the Earth to bulge out by about 2 meters around the equator and our liquid oceans are pulled even more as the earth rotates under the sea and cause the tides.

However, because the force of gravity goes from very little away from the black hole to infinity at its centre, the tidal forces generated could be huge over distances at short as a couple of meters.

If a 2m tall astronaut was pointing feet first towards a stella black hole with the mass of our sun and a diameter of 5.8km and was 100km from the event horizon, then the difference in the gravitational pull between their head and feet would be 47500 times the pull of gravity on the surface of the earth, basically, they would be ripped apart or spaghettified well before they reached the event horizon.

But if they were 100km from the event horizon of a supermassive black hole with a mass of 100 million sun’s and with an event horizon diameter of 590 million km or about 80% the size of the orbit of Jupiter, then the tidal forces from head to foot would 3 times less than they would experience standing on the earth.

The Moral of the story, if you going to fall into a black hole find the biggest one possible so as not to get ripped apart before you even get there.

So, if we assumed that our astronaut was near a super-massive black hole they wouldn’t even know when they are crossing the event horizon and not feel anything unusual but to an outside observer looking at them from the side, they would see them go ever more slowly while any light they emit becoming redder and redder as it faded away due to the gravitational redshift. The same would also happen to the radio signal back to their spacecraft.

That’s what’s happening with a black hole, the extreme pull of gravity is distorting space-time so much that its moving faster towards the singularity than the light inside and that’s why we can never see inside a black hole and once over the horizon, we would never see our astronaut again.

In the black hole, to our astronaut, time would run normally and light would still travel at the speed of light, it’s just that the whole piece of space they are in is now rushing towards the singularity at an ever-increasing exponential rate.

What happens next is speculation but we have some ideas based on our current thories. If the black hole had a diameter of 590 million km then it would take just over 16 minutes to reach the centre travelling at the speed of light.

But the space itself would be accelerating much faster because, at the centre, gravity would be infinite and therefore the speed of space as it reached there would also be infinite.

To a photon, a journey from one side of the universe to the other is instant because at the speed of light time stops even though to us as the outside observers it takes a hundred billion years or more allowing for the expanding universe.

However we might think about it, there is no absolute time, time is relative to each person and their circumstances depending on how warped the piece of spacetime where they are.

This leads us to a rather strange duality of possibilities. Whilst our astronaut was moving closer to the event horizon in maybe a few just minutes or seconds of their time, to us on the outside they were already travelling close to the speed of light, so seconds to them would become months and years to us. By the time they cross the horizon, it could be in the far future for us as time for them essentially grinds to a halt from our perspective.

To our astronaut looking out at the universe, it would seem as though the rest of it was speeding up exponentially and even though the amount of time they have left to live could be measured in minutes or seconds, they will have outlived all the life on earth and whatever humans became either by design or evolution.

They would be in a way, be both dead and alive, a sort of Schrodinger’s astronaut but without the quantum dice. Whilst the rest of the crew would return to live their lives, our astronaut would be frozen in time, alive in their version of reality, yet dead to us.

Before they reach the centre of the black hole they will enter the most extreme place in the universe this side of the big bang. The density of matter at the centre of the singularity is thought to reach the plank density or higher. To give you an idea of what this is, if you took all the material in the observable universe and compressed it to a space less than the size of an atom, that would be about the plank density.

As you compress matter the it gets hotter as the particles collide together ever more energetically and as it approaches the centre of the black hole the temperature would rise to trillions of times greater than the centre of the sun but then at the actual singularity, the point of infinity, it would be  about just a millionth of a degree above absolute zero because heat is energy is light and it can’t escape, so there is nothing to measure, therefore there is essentially no temperature, except the tiny amount from the hawking radiation that leaks away.

And this is the problem, when we introduce infinity into our current equations they collapse and so do our theories as to what happens inside a black hole too.

From there on in, who knows whether the contents of a black hole are spewed out into another universe or dimension as a white hole or even a new big bang somewhere… or they are ever so slowly returned to this universe as information in the form of hawking radiation in 10 to the 100 years during the heat death of the universe as the black holes eventually evaporate away.

What we do know is that black holes show us that the nature of reality is far stranger than anything we could imagine and even though they represent the effect of gravity taken to its ultimate logical conclusion, they also show that space, time and the stuff we are all made and take for granted might not be as fundamental as we would like to think and there are other deeper processes at work that we don’t yet know of.

So I hope you enjoyed the video and if you did then please thumbs up, share and subscribe and thanks to all our Patreons out there for their ongoing support.