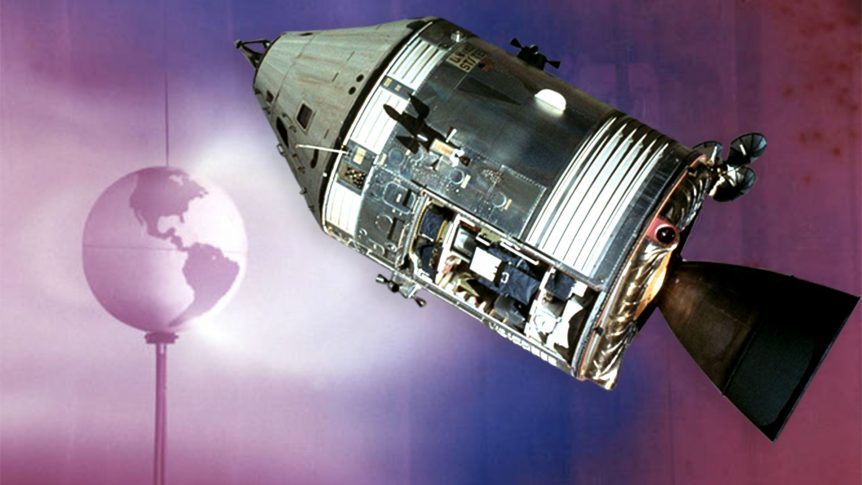 One of the most hotly contested procedures during the Apollo missions was the how NASA dealt with the issue of the Van Allen belts, the naturally occurring belts of radiation that surround the earth, both on the journey to the moon and returning from it.

To some this just proves the point that NASA never went to the moon because they contest that if the crew went through the Van Allen belts they would have received a lethal dose of radiation and died during or shortly afterwards but as we know that didn’t happen, so how did they achieve this.

Mention word “radiation” and most people will think of X-rays and the atom bomb, Hiroshima, Chernobyl and therefore associate it with bad things.

Yes, you do need thick lead shielding against high intensity X-rays but the radiation in the Van Allen belts is not X-rays, its charged particles.

There are two main types of radiation, the first is electromagnetic waves. This covers everything from the radio waves, though microwaves, infrared which we feel as heat, visible light on through ultra violet,  X-rays to Gamma rays, that is the electromagnetic spectrum.

The second type of radiation is charged particles, these are the component parts of atoms such as  protons, neutrons and electrons which have been broken apart by nuclear reactions or extreme heat as in the sun.

These particles flow out from the sun as the solar wind and because they have a positive or negative electric charge they react with the earths magnetic field. Some are attracted to the north and south poles where they enter the atmosphere and react with the air to create the northern and southern lights.

Others are captured into the bands of the magnetic fields around the earth where they form the Van Allen belts. These consist of an inner and outer belt and a third temporary belt which appears when the sun has large solar flares.

These bands extend from around 1000 to 60,000 miles above the earths surface with the most active areas centred around the equatorial area of the earth but these thin out nearer the poles.

This type charged particle radiation is known ionizing radiation, which means that the particles have enough energy to knock electrons from atoms or molecules that make up the spacecraft and the crew inside which can cause tissue damage if there is a high enough exposure for long enough.

The main types of ionizing particles in the Van Allen belts are high energy protons and electrons, the protons can be stopped by light metals such as the aluminium skin of the craft and the epoxy resin heatshield.

Electrons also known as Beta particles can penetrate several inches into a living tissue but because they are very small they tend don’t do much damage.

They can also be blocked with materials like Polyethylene that contain a lot of hydrogen, the hydrogen atoms are very light and absorb the beta particles also the fibrous insulation between the inner and outer hulls of the command module would also be a good shield against them.

One problem is when Beta particles interact with large atoms like lead because they give off secondary X-rays, this is called the bremsstrahlung effect.

So the thick lead shielding that some people think is needed to protect the crew from X-rays would ironically make the problem worse by creating more X-rays whereas the lighter metals like the Stainless steel and aluminium of the command module would create less x-rays and even then some of these x-rays would be absorbed by the inner hull.

So Whilst we can shield against the radiation to a degree, providing that is not too strong, there are other things that the NASA engineers and mission planners knew about, one of these was where the thickest and most lethal of the Van Allen belts were due to the previous mapping that had been done and also about how the human body reacts to radiation.

The effects of radiation are cumulative, that means that the longer you are exposed to it, the more damage it causes. Within reason, a short exposure to higher levels of radiation is better tolerated by the body as it time to repair the damage afterwards.

Long exposures to low levels of radiation cause more problems because the body has try and repair itself and contend with the continual damage occurring whilst it does this.

If you spent an extended period within the Van Allen belts, then the effects would be lethal but the Apollo crews spent only about 6 hours in total, about 3-1/2 hours going and 2-1/2 returning, several days later, effectively two sort bursts separated by a rest period.

More importantly, the course which each of the Apollo craft took avoided the most lethal parts of the inner belt completely and they only went through the thinnest parts of the outer belt.

All the astronauts wore dosimeters to measure their personal radiation exposure levels during the flight and reported the results back to NASA at regular intervals.

In total, the amount of radiation that the Apollo crews received during their flights to and from the moon from high energy protons, electrons and x-rays from the bremsstrahlung effect was much less than the yearly allowed dose for someone working in the nuclear industry and regularly dealing with radioactive materials.

In the end, the simple answer to why the Van Allen radiation belts were not the killer issue that some think it was and how the Apollo missions cut the radiation exposure for the crews to between just 1 and 5% of what it could have been, is because the Apollo missions didn’t need to go straight through the Van Allen belts, they basically flew around the most deadly areas and were not in the less dangerous areas for long enough to be a show stopper.

This remain true today for any future missions, why go through it … when you can just go around it.

Thanks for watching and I hope you found it interesting and informative, if you did let me know in the comments below and as always please subscribe, rate and share.

We also have other videos that you may find interesting on the  “Click for more Videos” link showing now, so its good bye from me and I hope you drop by again soon.